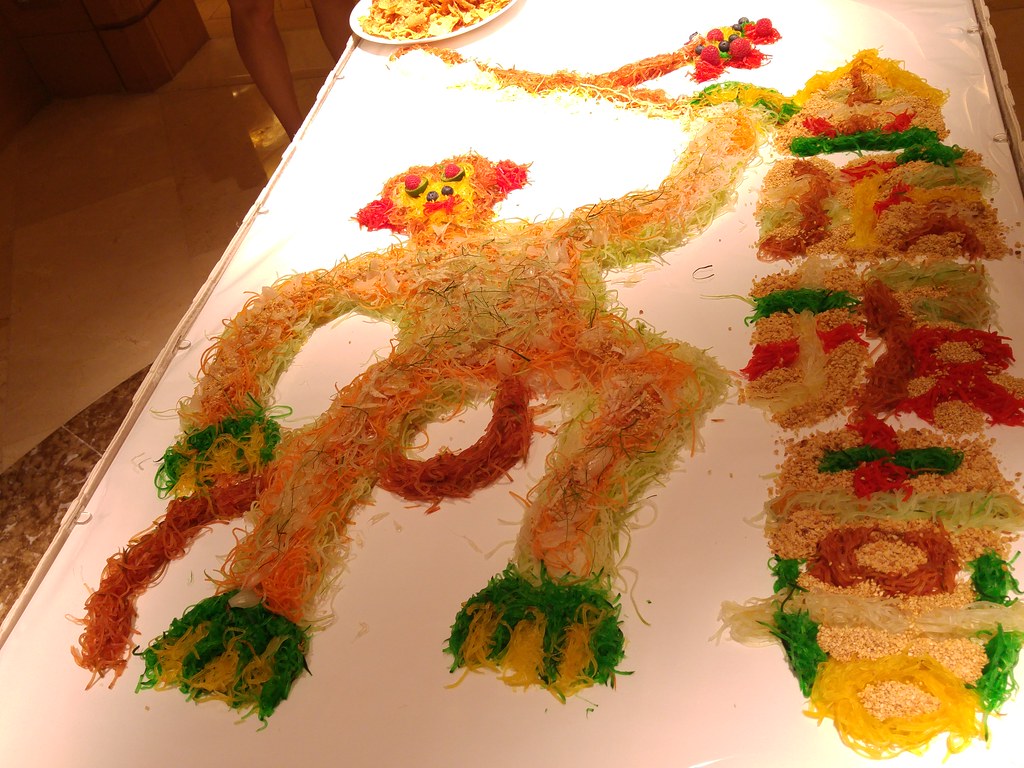 In celebration of this Lunar New Year, Golden Peony at Conrad Centennial Singapore sets out to delight you with its ‟Prosperity” specials, which are available both dine-in and takeaway from January 20 to February 23. The man behind this exquisitely crafted menu is none other than Executive Chinese Chef Ku Keung. 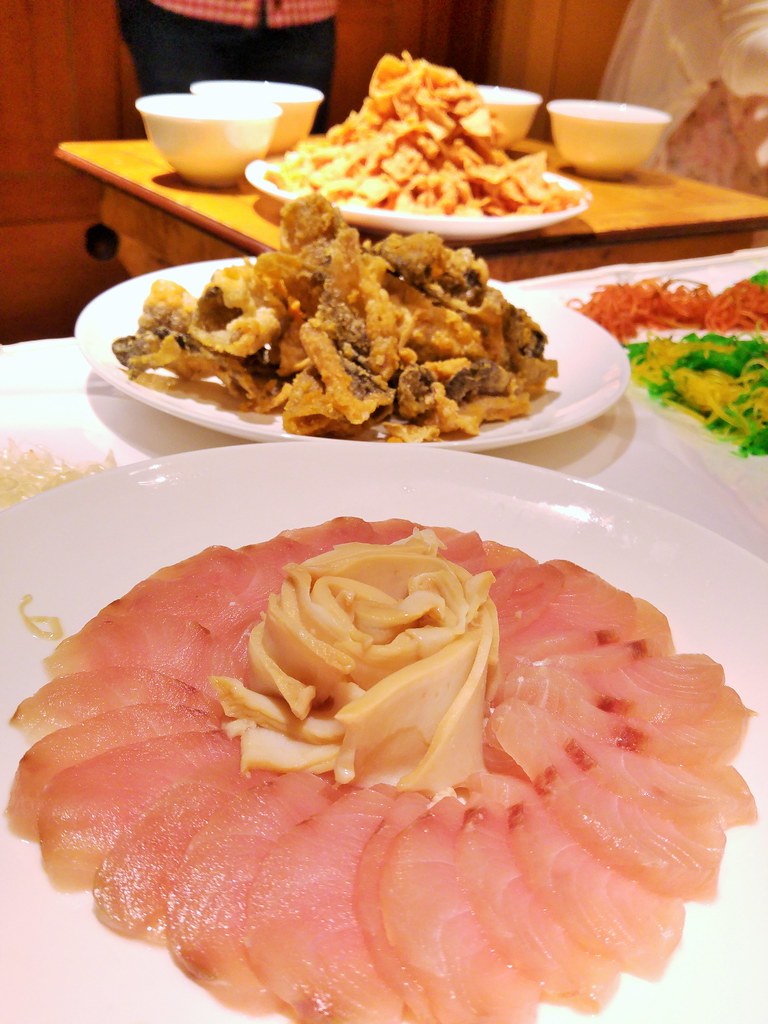 What was creating a buzz in the room when I arrived was the ‘Fiery Monkey’ at the door.  That was the Fortune Monkey ‘Yu Sheng’, painstakingly put together by the culinary team. It was a pity when we had had to destroy it, but at the same time, I couldn’t wait to have a taste of this luxe version - With Abalone, Hiramasa, Crispy Fish Skin and Crispy White Bait, this dish did get our appetite moving. 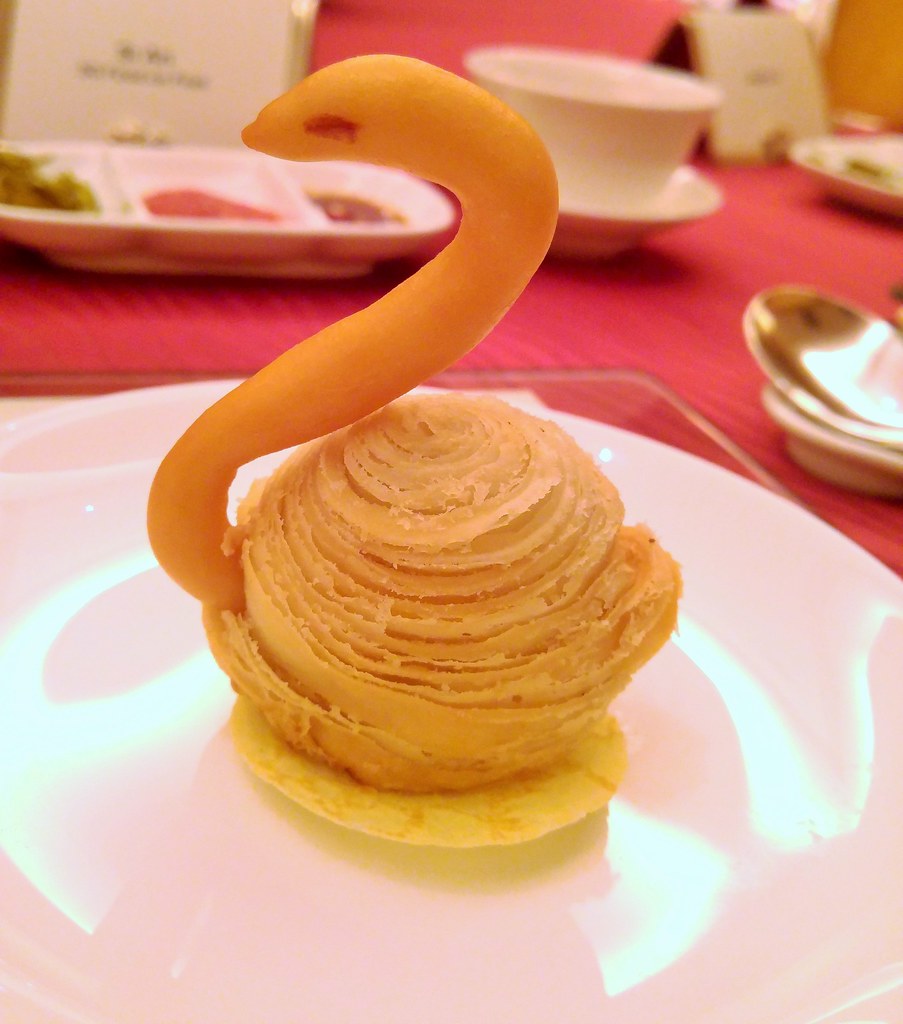 The second dish was beautiful. Residing on a blue plate which symbolises the lake, to think that a big guy like Chef Ku is able to create such an elegant dish, his mind must be real intricate.   Filled with Foie Gras, Truffle and Minced Chicken, all three ingredients gel well together.  Chef Ku has cleverly mixed the minced chicken with sweet potato, giving it a golden core. 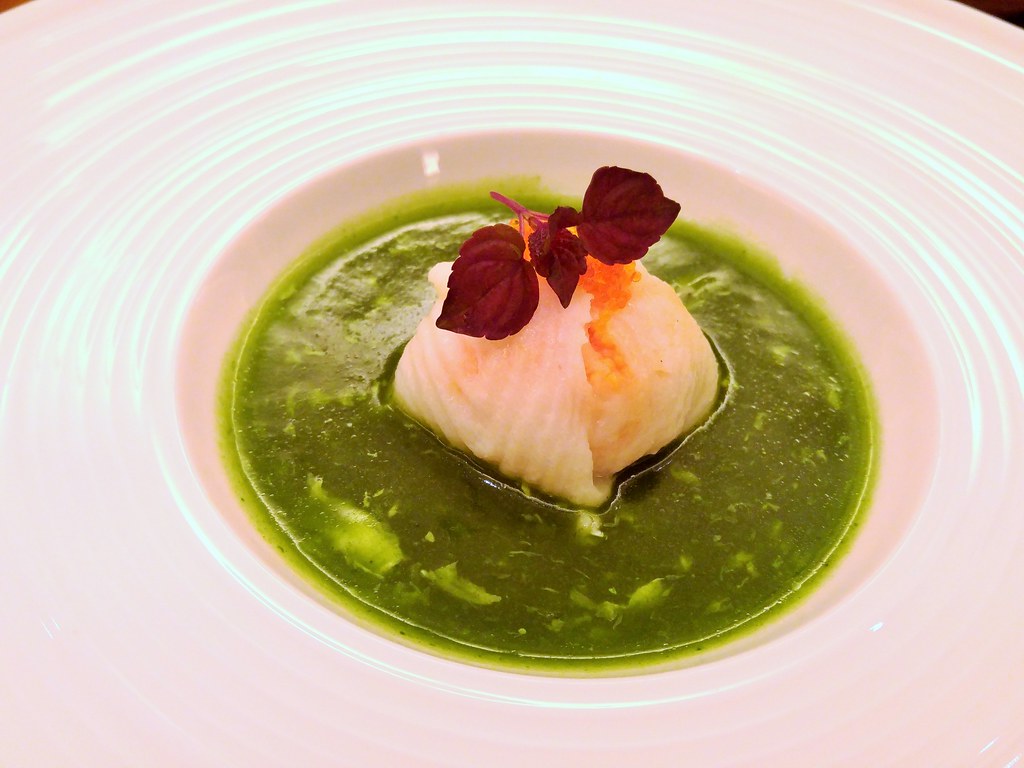 Next up was another exquisite dish. Canadian Sea Perch Roll with Lobster, Minced Shrimp and Fish Roe in Spinach Puree. I took a moment to admire it before starting on it. The jade colored puree was velvety and palate cleansing, which balance the slightly savoury roll. I assume that an easier way would have been to wrap the ingredients together into a Chinese dumpling using a dumpling skin, hence I appreciate the extra effort taken to using the sea perch instead. 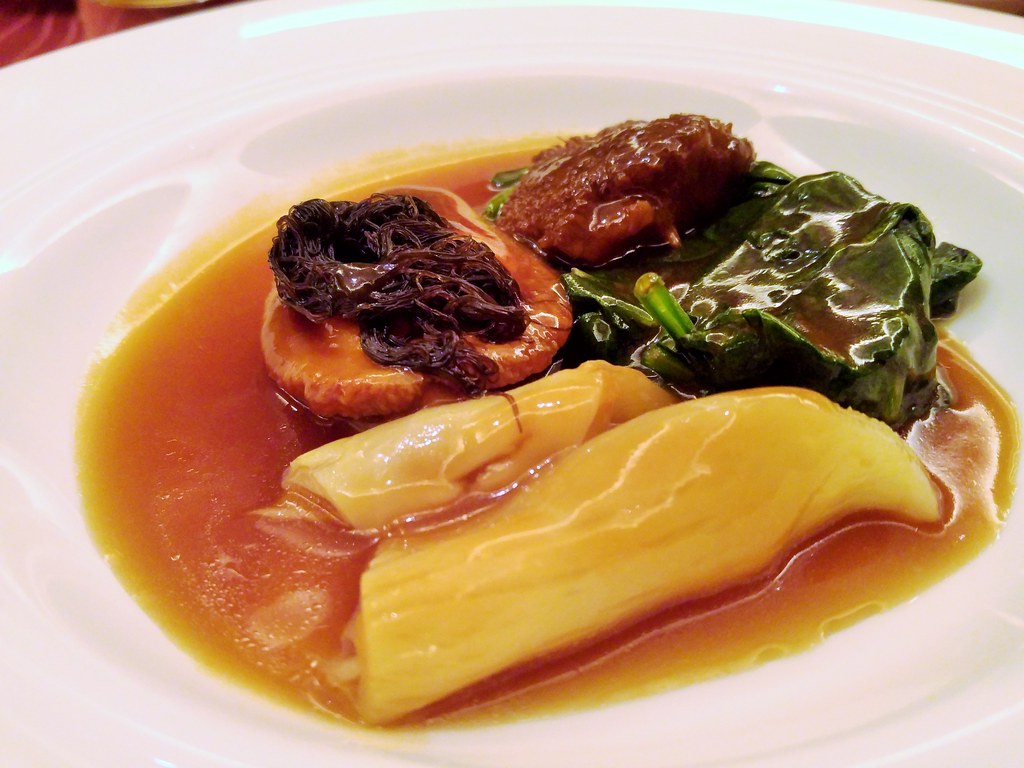 This is a prelude to their Pen Cai. I have never taken a liking in Pen Cai honestly, hence I was quite surprise that I actually like the braised sauce.  I love the ‘Monkey Head’ Mushroom which is really flavourful, as well as the Fish Maw that is firm and almost crunchy. 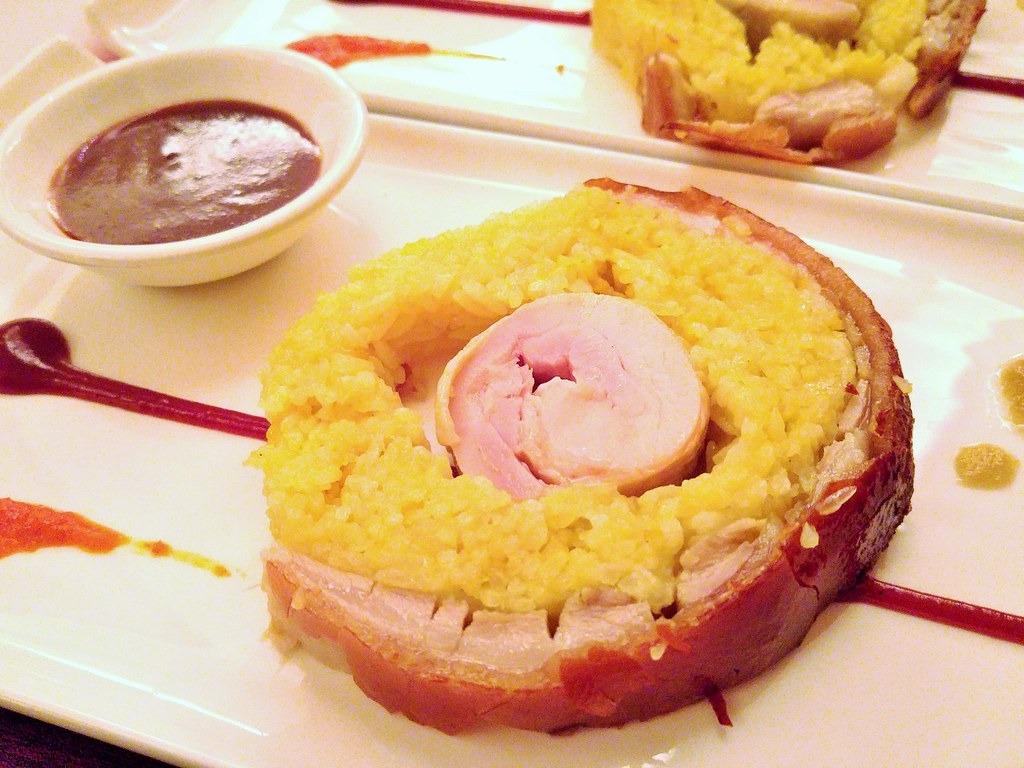 The room vibrated with excited when the Roast Suckling Pig entered into our sight.  I guess even the fiery monkey got to make way for this little boss.  What’s different from last year is that Hainanese Chicken Rice is used as the stuffing, instead of the glutinous rice with preserved meats.  The skin was roasted to a beautiful golden reddish brown, and gave way with a crack under the blade.  Again, a lot of preparation work has had to be done before it makes its way to the table.  I love the skin, as always, and I wish I could ask for a lot more. I was a little disappointed by the rice though, my preference still lies with the classic stuffing. 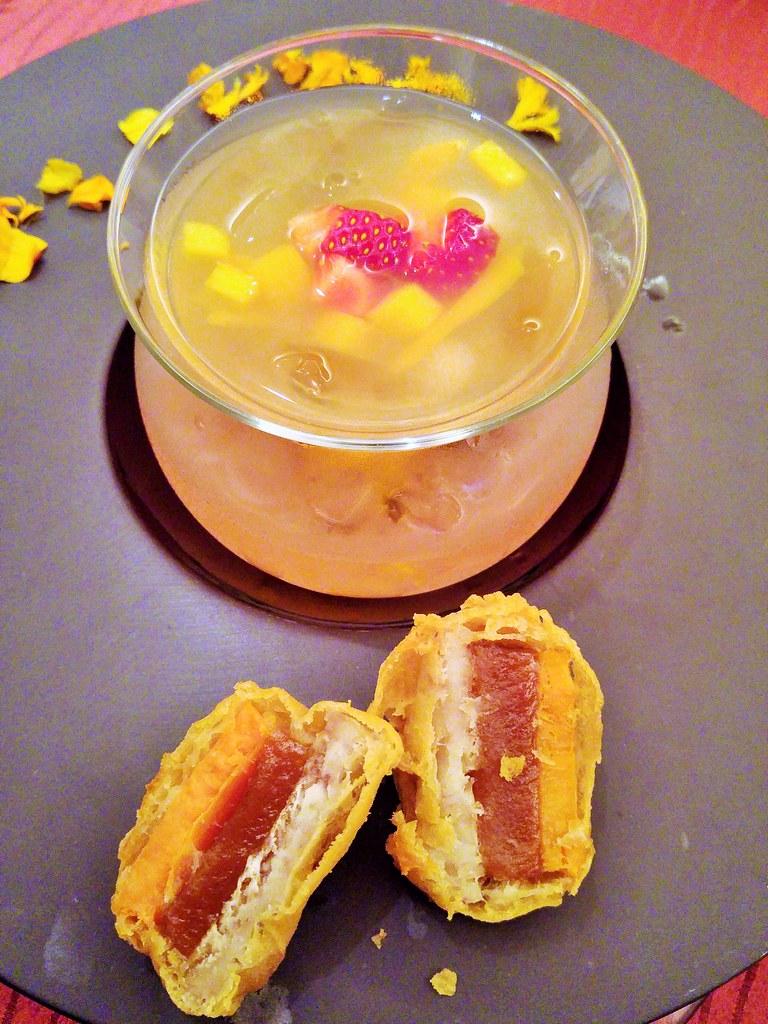 The dessert tonight is an artwork of its own.  Though a tad too sweet for me, it is still quite light and refreshing.  I wish the Nian Gao could be more oozy. Well, I guess that’s just the gluttonous me talking.

The biggest star tonight, is of course Chef Ku Keung himself.  He’s so friendly and humble! I feel honoured to be able to meet him in person and have a taste of his masterpieces.

Prosperity set menus for lunch and dinner are available from S$100++ to S$188++ per person and S$998++ to S$1,888++ per table of 10 persons. You may check in restaurant for special Lunar New Year a la carte offerings.  In the spirit of the new year, Oscar’s will be opened round the-clock offering supper treats of local flair, including claypot noodles and traditional Chinese congee. Guests can also opt for “takeaway treasures” in the form of hampers consisting of traditional Chinese goodies that represent abundance and good fortune.