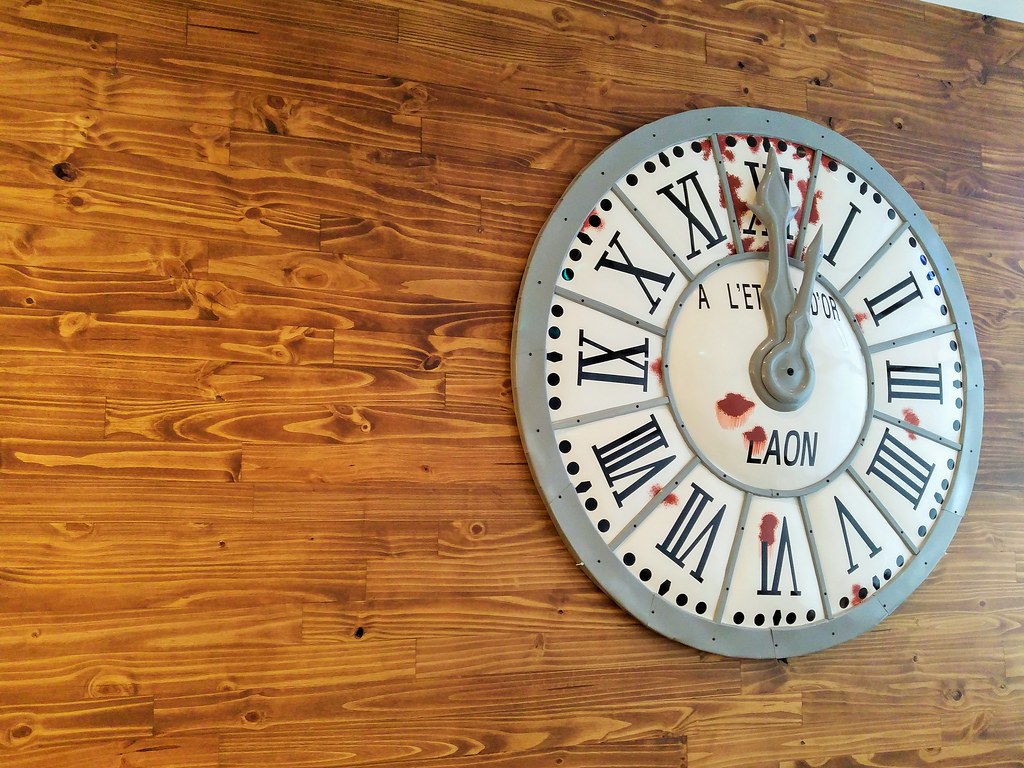 CaffeBene, the largest coffee chain in Korea, has finally made its way to our sunny island. Pretty close to the coast, up at Level 2 of Vivocity. If you have been to one in Korea, you would have noticed a difference in terms of its interior. Instead of adopting the woody furnishing design as used in Korea, the local owners chose to use the latest industrial chic design while keeping some of the key original elements such as the wooden frames of the seats, a feature wall and a planter. So what I see is almost akin to a hipster café, but with a soft touch and a warm feel of Caffebene. 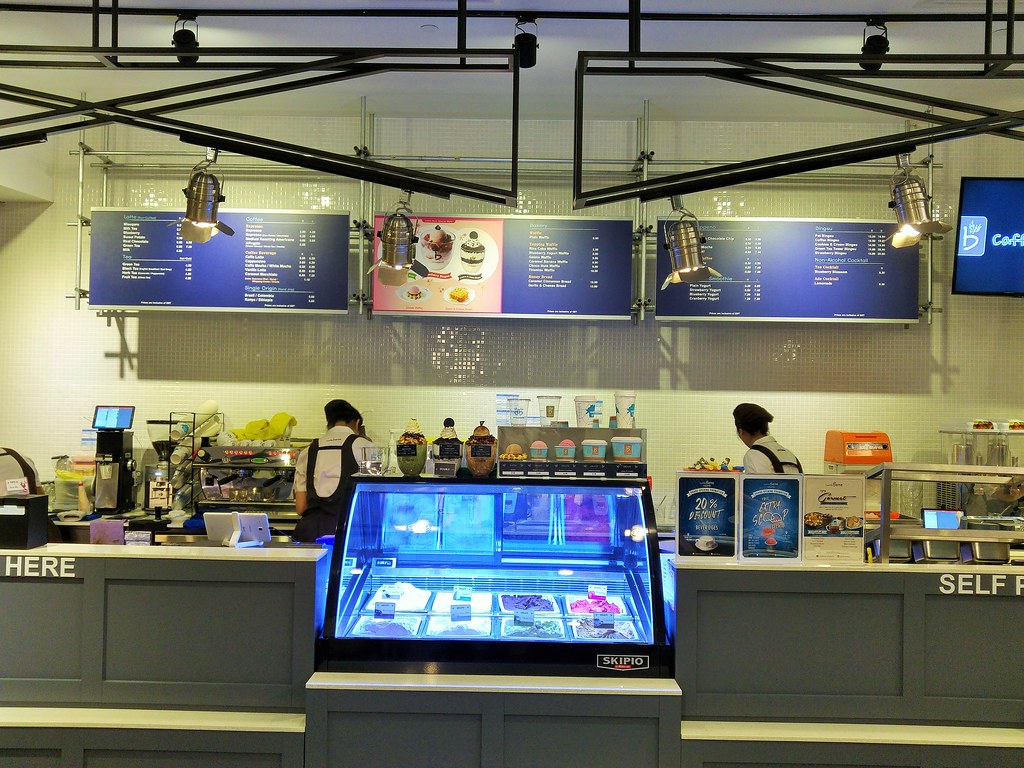 When I was in Korea, I was quite fascinated by the selection of lattes in different cafes, such as sweet potato, red bean etc. Caffebene's offering is just as wholesome, of which Misugaru ($6.90) is one that I have not seen - a multigrain latte. Not only it sounds nutritious, it tastes just as hearty! I can see why it’s a popular choice for breakfast among the Koreans. Since Caffebene is a coffee house, trying their coffee is a must, at least for me. I had their Macchiato ($4.90 double shot). Although it is slightly acidic, I appreciate its full body. At least, it is a lot better than some of the major coffee chains here (you should know who). 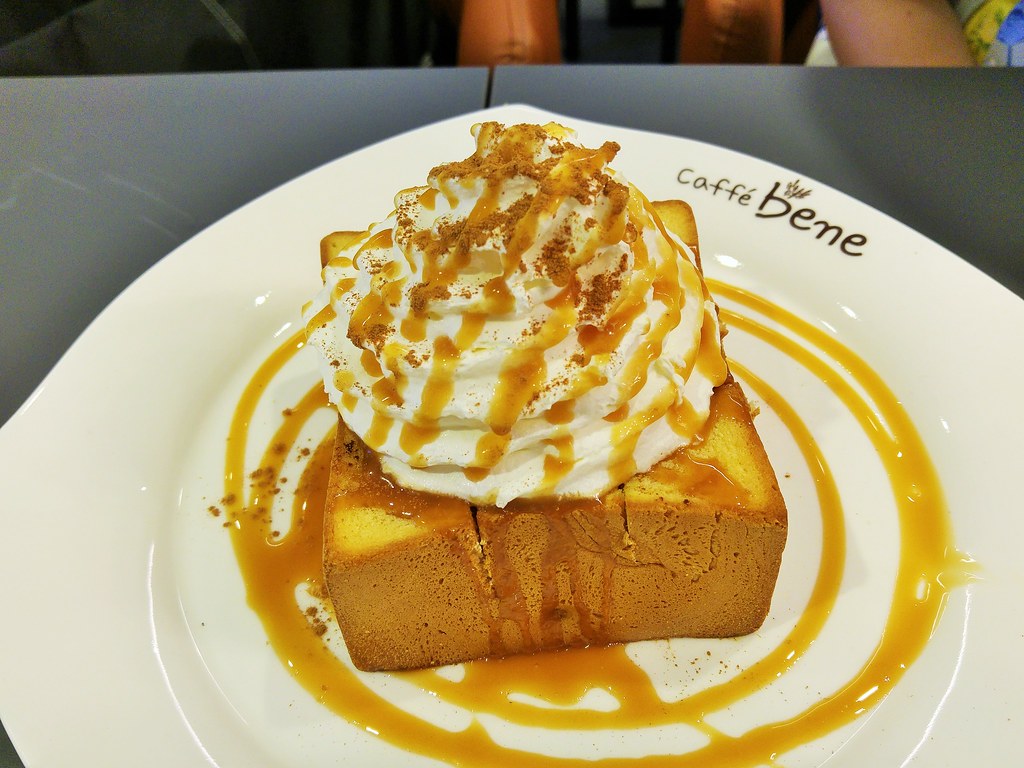 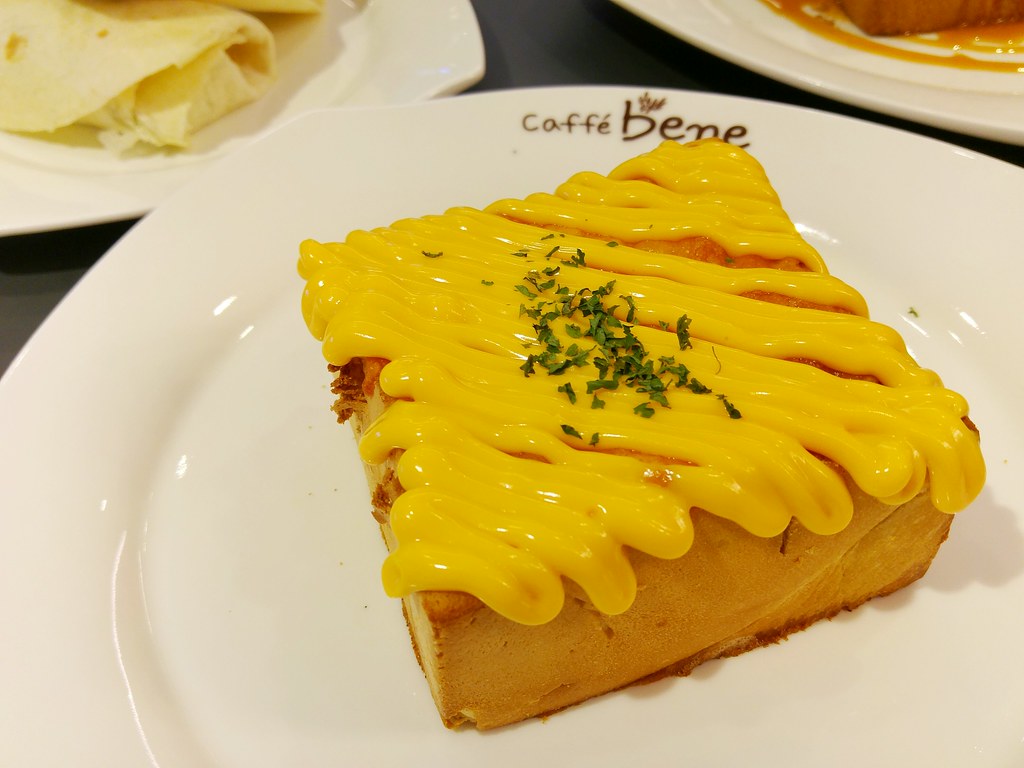 Their Korean desserts are quite straight forward - Honey thick toasts, bingsu as well as waffles. For their Honey thick toasts, we tried both Caramel Cinnamon ($12.90) and Garlic & Cheese ($13.90). Our preference for the sweet and savoury taste of the latter is unanimous. That explains why it was also the first to go despite the amount of food we ordered. 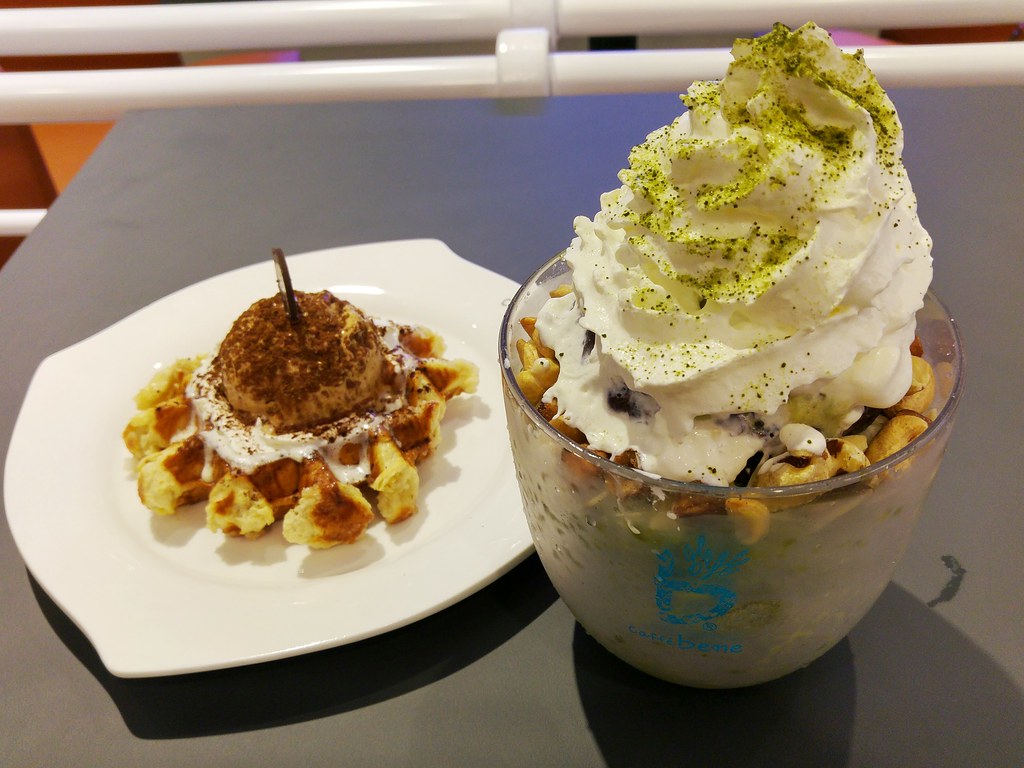 The Green Tea Tower Bingsu didn’t disappoint us at all. Despite the sinfully looking whipped cream atop, the overall taste is actually very light, thanks to their in-house gelato, which is made less sweet to suit the locals’ taste buds. Do give their gelatos a try. I sampled both the Yogurt and Cream cheese flavours. Both are refreshing and finished off without leaving the usual sugary aftertaste which I got from most of the Italian gelatos we have in the market. 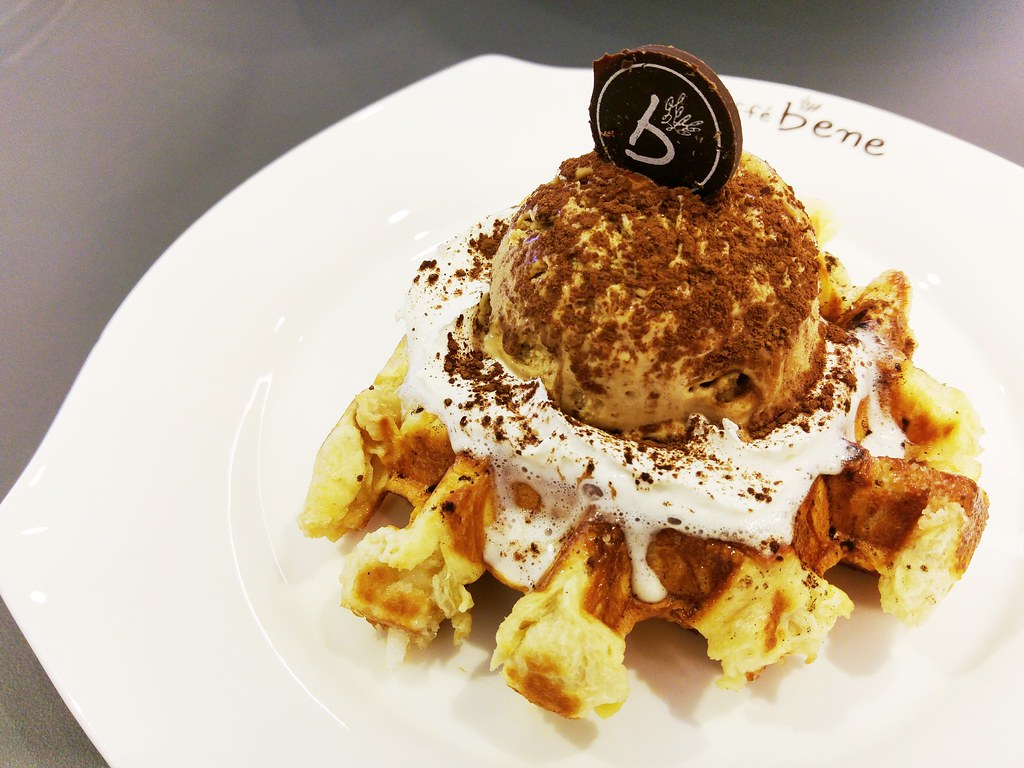 For waffles, do ask for their walnut base, which is the same price as their regular base. We tried the recommended Tiramisu Waffle ($10.90). The combination of the cold, airy ice cream with the buttery nutty waffle is simple yet extremely delightful. 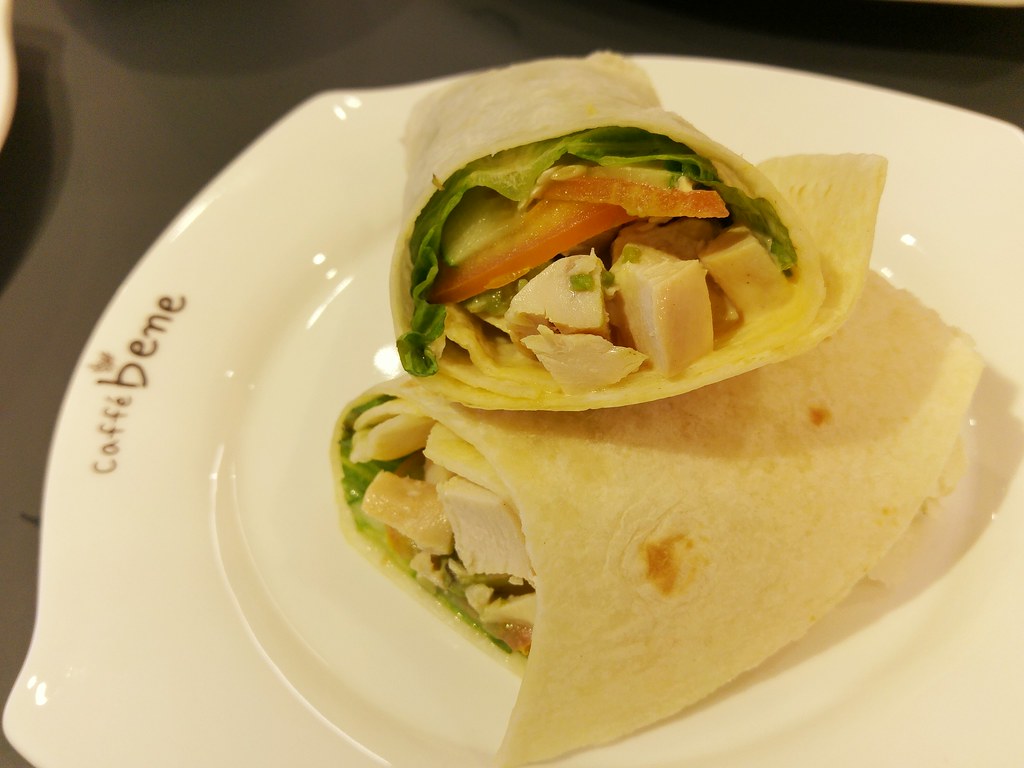 Besides desserts, salads and wraps are available. Their Chicken Avocado ($9.90) is quite delectable, probably due to its tangy dressing. However, for the price tag, a more generous serving will be more enticing.

Comparing to its counterparts, Caffebene may not have very complex desserts which some may prefer, I do enjoy their simplicity. The quality of their coffees is also notable. The desserts offered also balances with its selection of coffees and other beverages, which is important for Caffebene to be seen as a coffee house, and not a dessert shop. To celebrate the grand opening of its first outlet in Singapore, there are some good promotions going on, hence don’t miss it!