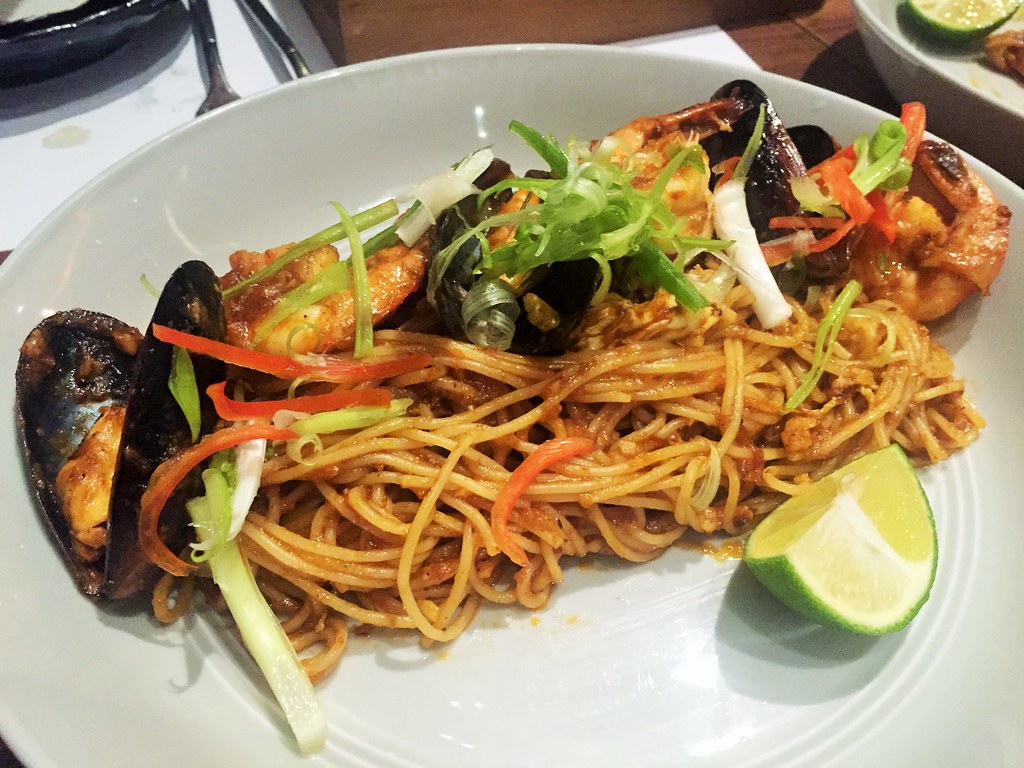 What the Lavender MRT Station has been known for in the recent years, is its close proximity to cafes such as Antoinette, Chye Seng Huat Hardware, The Tiramisu Hero etc. Little it is known to be the station to get down for a particular restaurant, and with a rather interesting name - Lighthouse Bistro, located at Jellicoe Road. Since opening in 2003, it has been serving mainly members of the Singapore Maritime Officers' Union, who is also its owner. (well, that says a lot about the name). Hoping to attract a wider audience, they decided to give their interior and a menu a face lift. After much R&D, what resulted was a contemporary selection of Asian-influenced meat and seafood dishes that aims to stay true to its maritime identity. 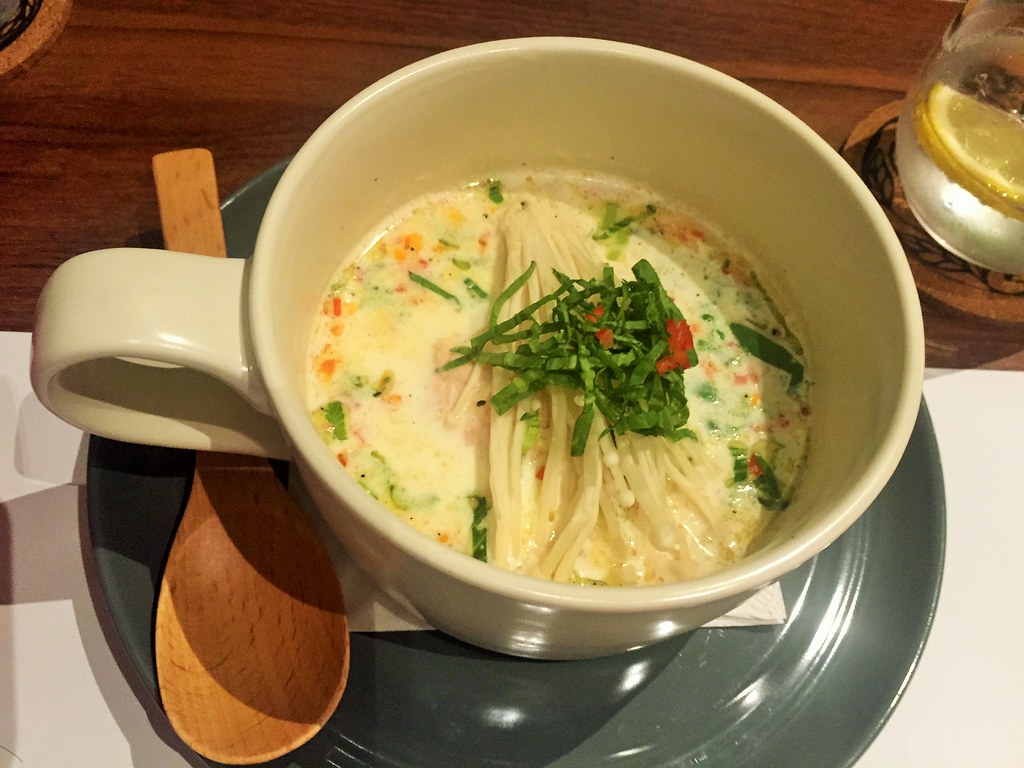 Given its association with the marine, do expect a wide selection of seafood items. To begin with, we had a simple Salmon’s Milk Bath ($10++). This appetiser reminds me of the salmon soup that I had in Helsinki. Although it's cream based, given its light texture, there is no issue finishing to the last drop. The good oil that oozed out from the Oceanic salmon helps to create a buttery body, which makes it even more satisfying. Probably due to the touch of chopped chilli padi, it was mentioned that some diners actually reminisced about fried fish bee hoon soup when drinking it. You may find similarity between the 2 dishes. 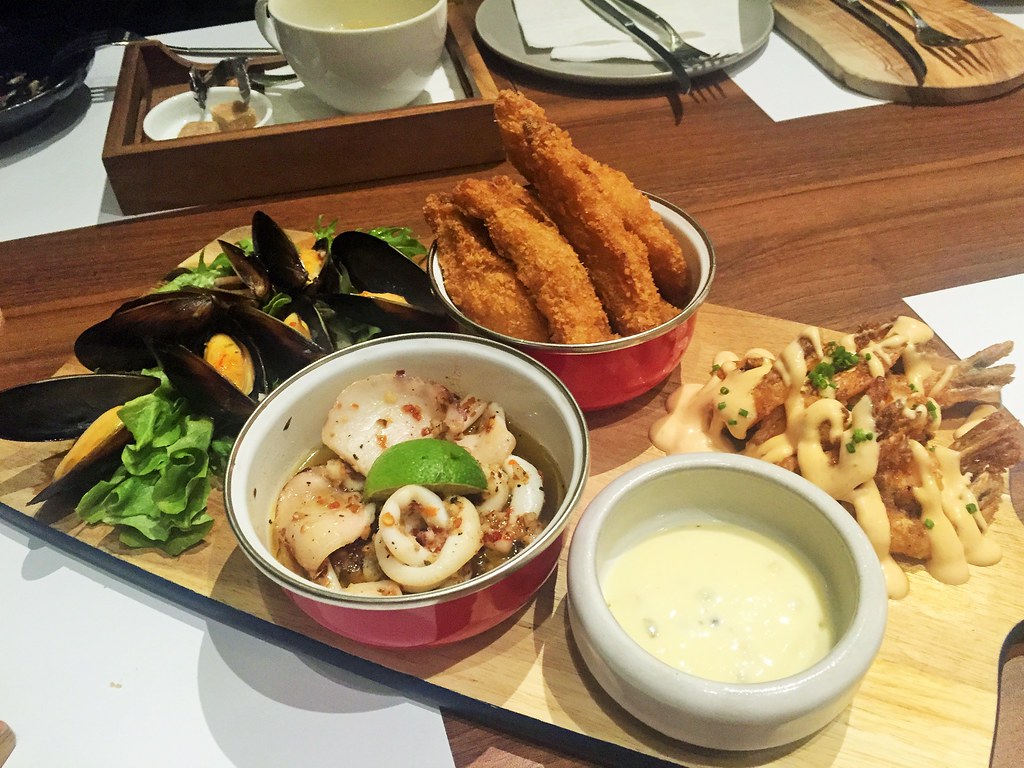 Fishermen’s Board ($18.++). A generous portion of seafood platter of Atlantic prawns, calamari, black mussels and deep-fried chunks of dory, accompanied with a light-whipped Orange Mayonnaise and a House Salad. Among the items, what I find the most well done was the calamari. It was quite succulent, not rubbery at all. Other than that, I feel the rest of the items was a bit flat. A sauce resembling sweet Thai chilli was being drizzled on the mussels, which I felt was kinda too sweet and dense for the mussels. Both the dory and shrimps were also too dry for me. 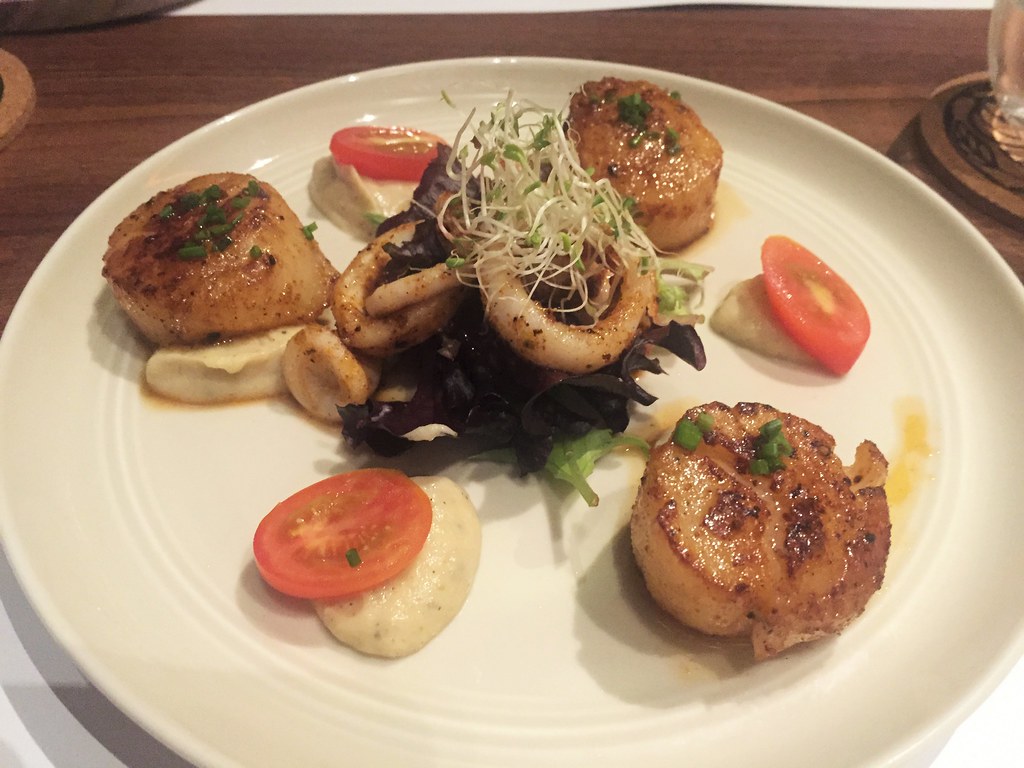 North American Scallops ($15++). This is my favourite of all. Nicely seared, keeping them moist and juicy. Creative use of Tom Yam cauliflower puree, hence making this common dish unique in their own ways. 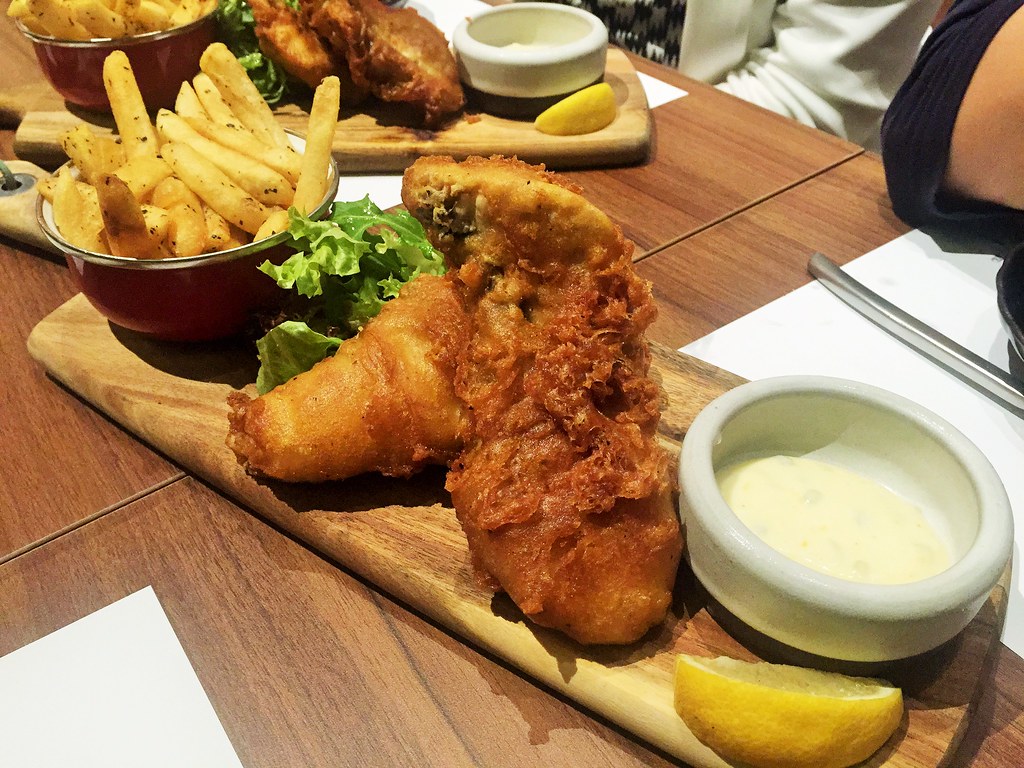 Lighthouse Bistro’s Tiger Fish & Chips ($19++). I was assured that this sea bass is coated with the real Tiger Beer batter, and not Anchor beer which some might be using otherwise. I hate batter that is floury, resulting in them taking in too much oil when deep fried. But this, I could finish it without any alarm on the fats. The fish was still quite moist. When comes to fish & chips, the chips is somewhat the lead as well, to complete the entire experience. Hence, it was more disappointing when the Nori fries did not turn out to be as tasty as expected. Apart from seeing the specks of nori ingrained in the fries, it's not present in taste. Perhaps spiking the fries with some seaweed strips may help? 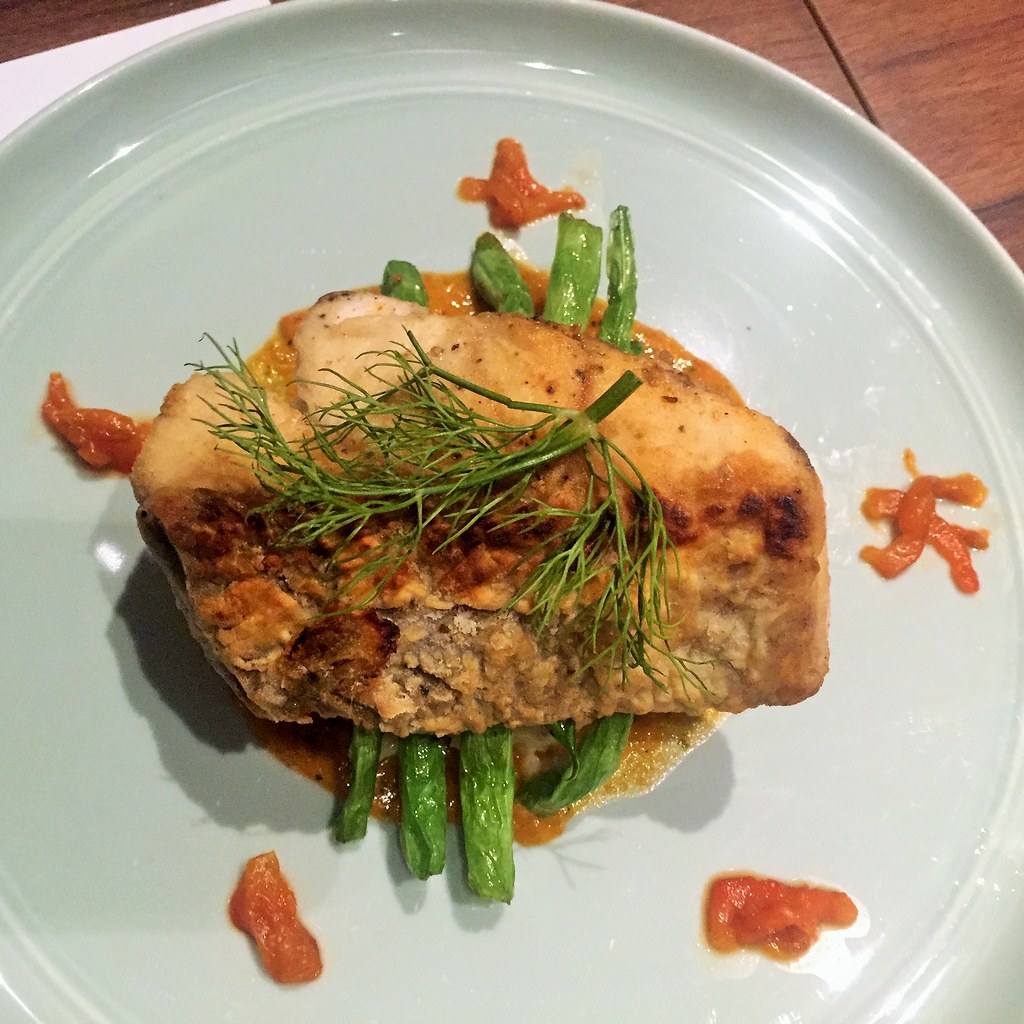 Pan-seared East Atlantic Sea Perch Fillet ($23++). I really like the capsicum sauce that was used to pair with the fish. It is a little tangy, and given its taste profile, it goes really well with this white fish. The fish, however, could be done better. The outer layer wasn't as crisp as I would prefer. The layer seemed to have coated with a layer of flour before pan frying, which turned flaccid after a while. 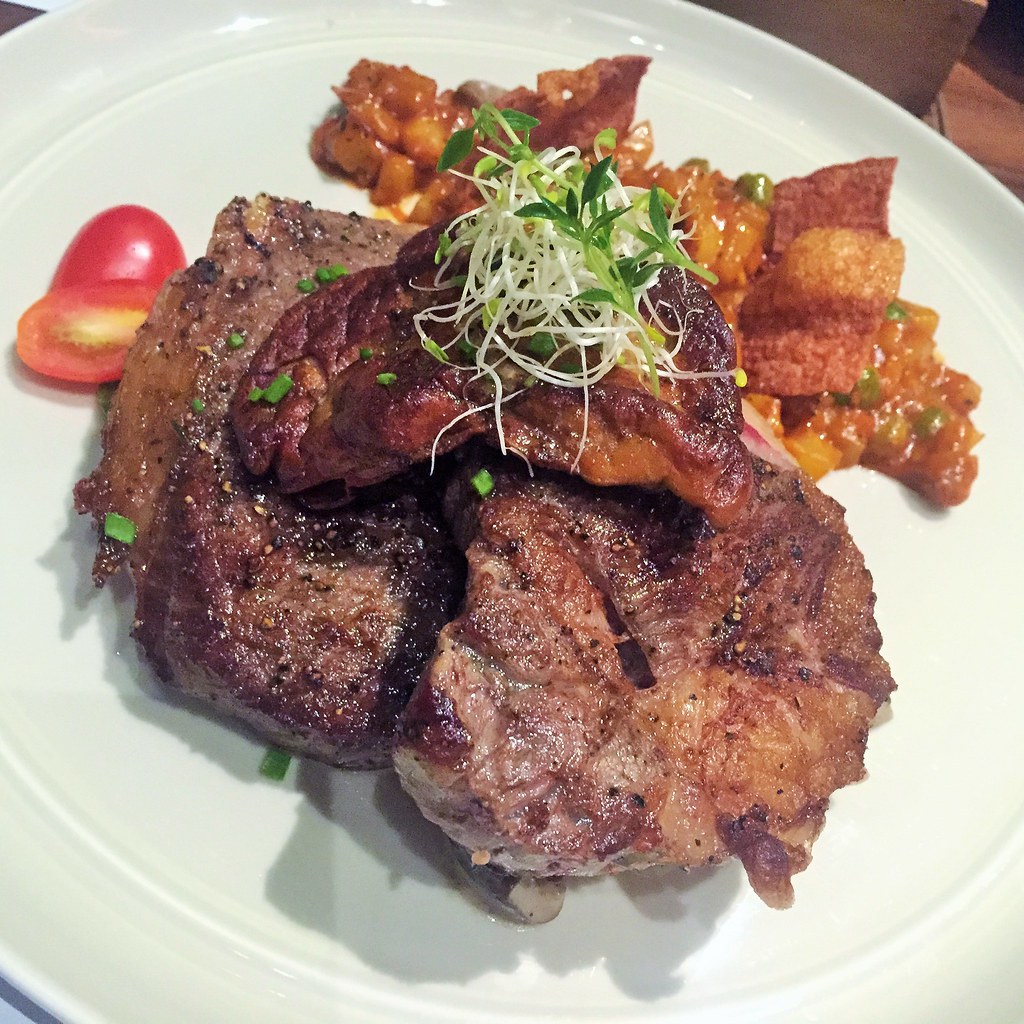 Black Onyx Angus Steak ($39++), a 3MB+ Australian steak – paired with a potato risotto, turkey bacon and red wine sauce. We had added on Foie Gras ($12++) and Red Wine Sauce ($7++). This would be a good choice for meat eaters. A real solid decent piece of meat. What I want to highlight is the red wine sauce. I don't have much experience with red wine sauce but this sits really well with my palate. To my untrained taste buds, the foie gras is just as lovely. It is slightly crisp at the edges, and not too gamy. 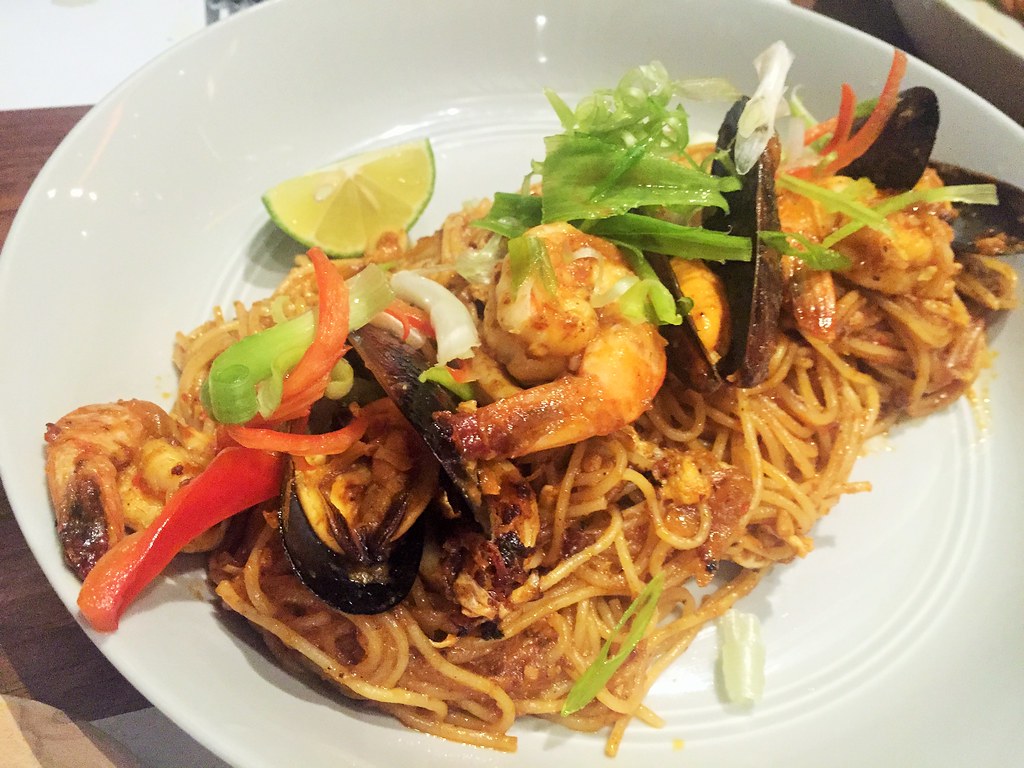 Malaysian Angel Hair ($17++). This dish is somewhat disappointing. I can understand the effort in infusing an Asian take in the dishes but perhaps there's also a need to take note of the nature of the ingredients. When this thin pasta can be just as delicious plain with olive oil, garlic, salt etc, the beauty of this pasta has been lost in the sambal sauce. Spaghetti would have been a better choice to hold the sauce's density. However, if you are in for something that can ignite your engine, this may be something for you. 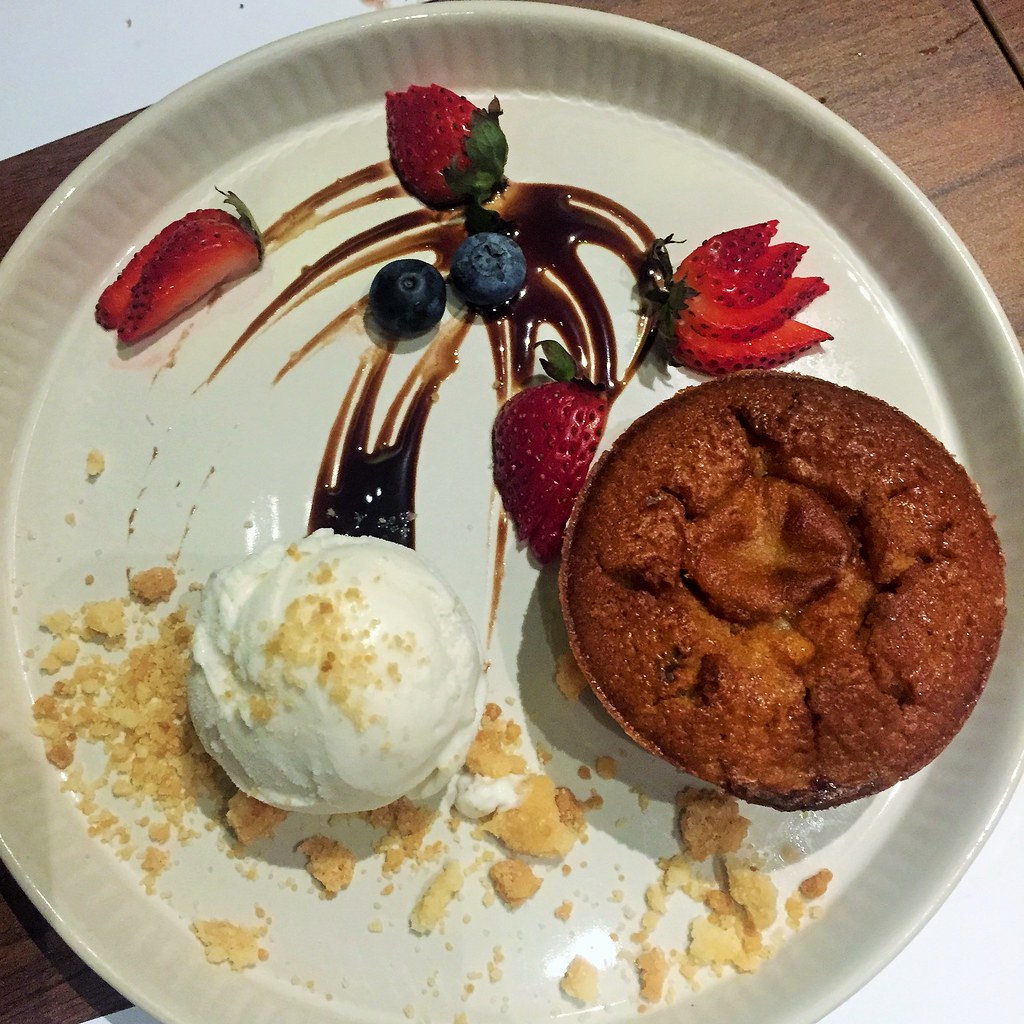 P.P Lighthouse Cake aka Pulau Pisang Lighthouse ($10++). Just some background. Pisang Island is a small island situated off the western coast of the Malaysian state of Johor. Situated there is Pulau Pisang Light, a lighthouse that guides ships into the western entrance of the busy our Singapore Strait, and, it is operated by us! Hence, the plating of the dessert symbolises the coconut tree and the light house. It is so comforting when the warm and spongy banana cake softens and melts with the coconut ice cream in my mouth. Such a simple recipe but twice the satisfaction level. 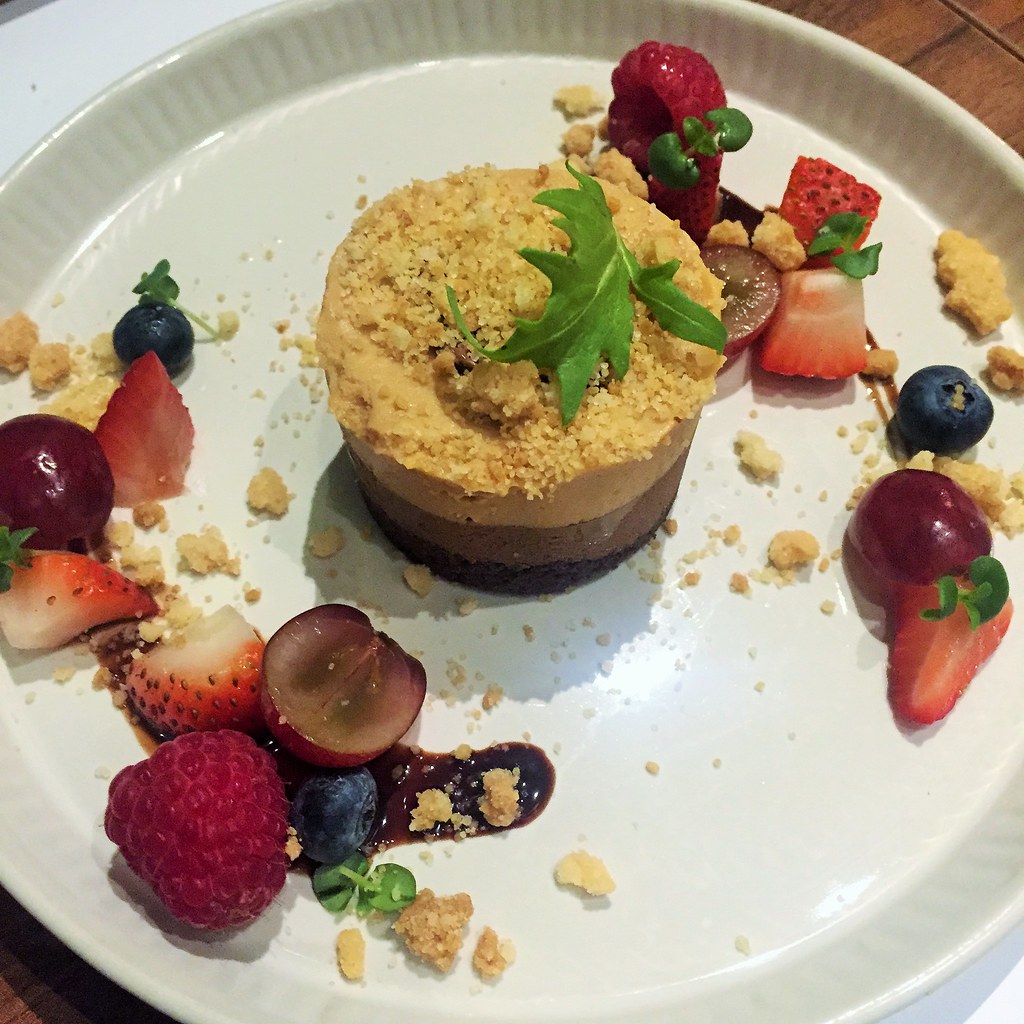 Chocolate & Caramel Cake ($13++). Made with 72% cocoa, it is no surprise that the chocolate mousse can be so velvety smooth. The creamy caramel atop is too, and also quite well balanced in terms of sweetness.

Their effort to rejuvenate their image can be seen not just from the exterior, such as the change of furnitures and lightings, but also little details - Their choice of material used for their new menu cover, the use of wooden board for my cutlery, which I really love, the nostalgic looking lighthouse icon that says "Summer 2015" at the corner of the table paper, and the cute little red bowl which they have given to me for sharing the Salmon Bath, which is my favourite of all. All are very thoughtful choices made, aiming at giving its guests a totally different experience than before. You may want to try and see for yourself as well!

Photography and Written By Si An. A girl who is allured by travelling, loves the feel of freedom, smell of the rain and the aroma of fine coffee and food.