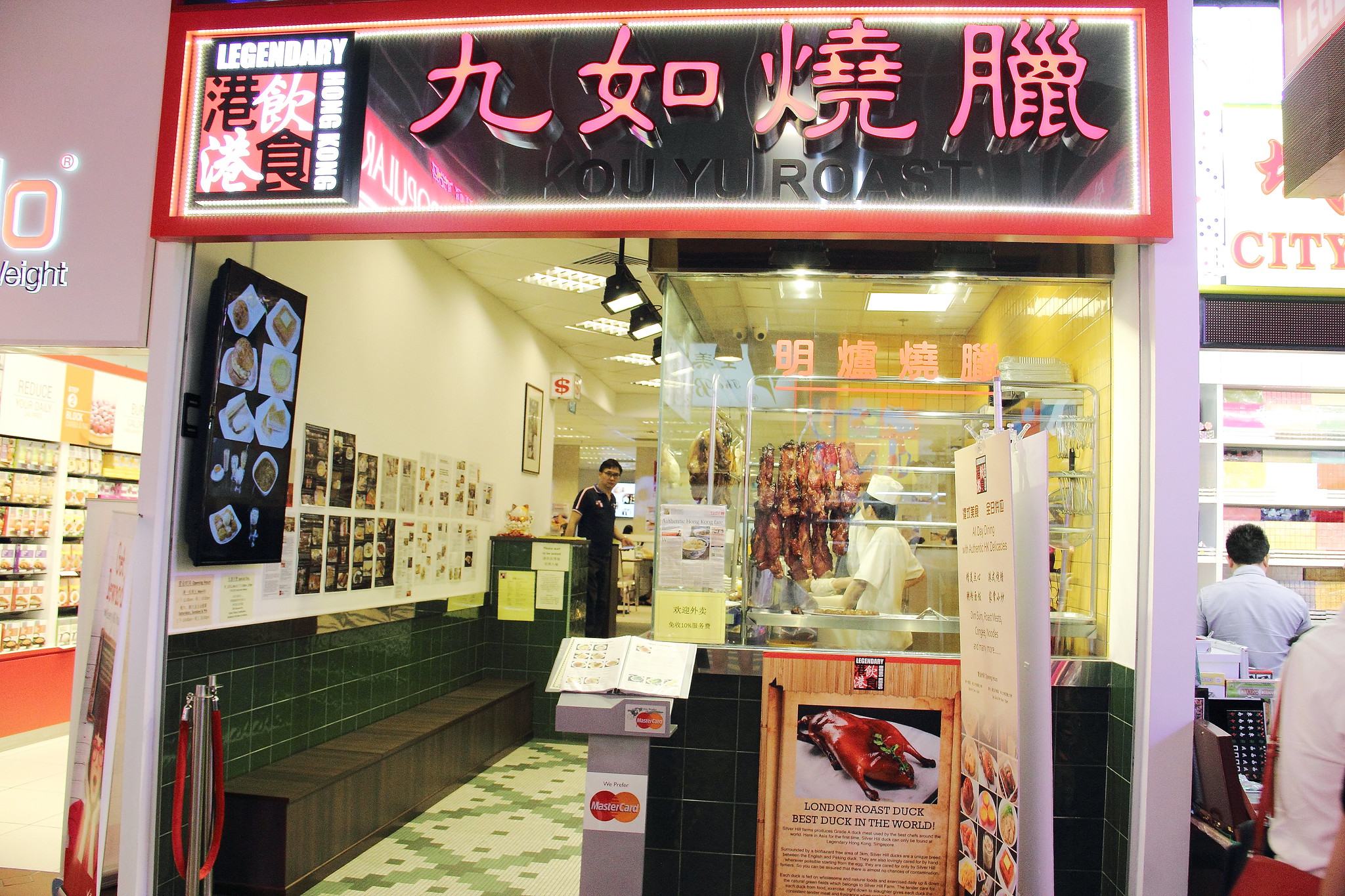 Many who has been to Hong Kong will know that it is a food paradise. From dim sum, wanton mee to roasted meat these are the delicacies that we must try whenever we visit Hong Kong. With the opening of Legendary Hong Kong at Jurong Point 2 Shopping Centre in July 2014, the restaurant actually brings to you all the Hong Kong delicacies into one place. Legendary Hong Kong comes in four sections offering roasted meats, noodles and congee, dim sum and bakery. 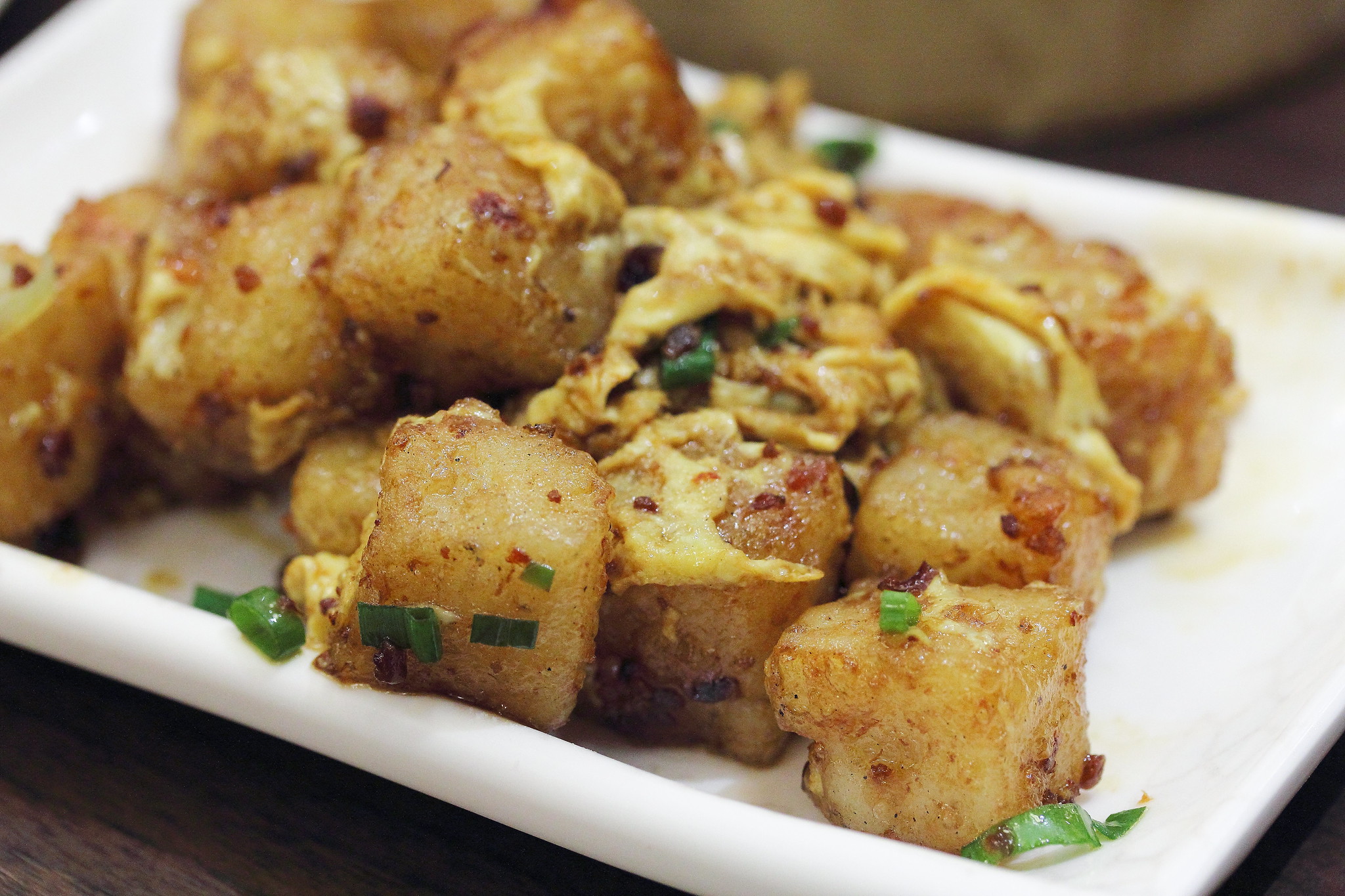 The Sauteed Turnip Cake ($5.50) was pan fried to a nice exterior crisp while retaining the internal moist with bites of the shredded turnip. The XO sauce further enhanced the whole flavours giving it a hint of spicy kick. 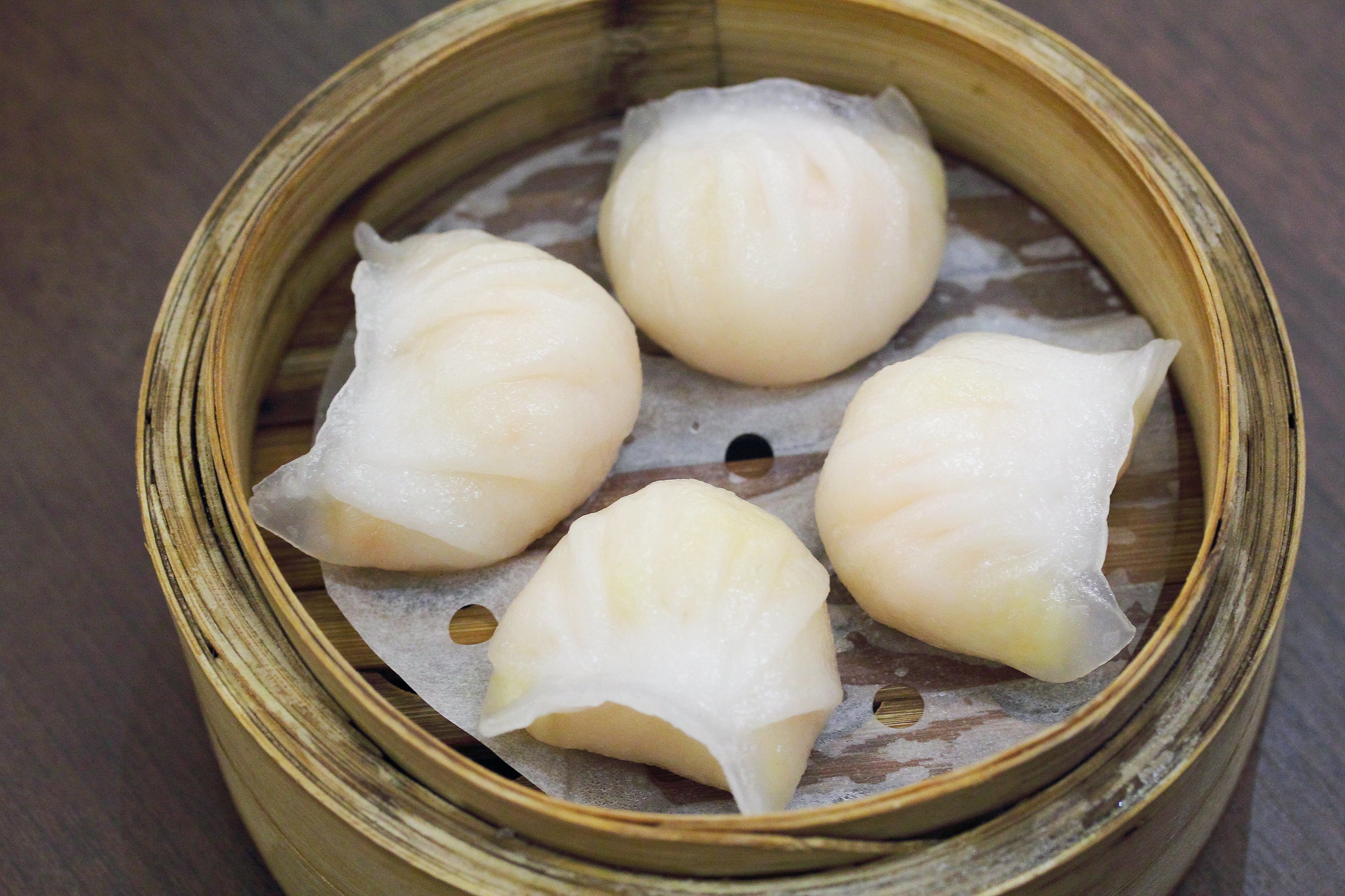 The Steamed Shrimp Dumpling ($5.50) comes with fresh, sweet and crunchy shrimp wrapped in a thin translucent dumpling skin. This is really good and you probably would not stop at just one basket. 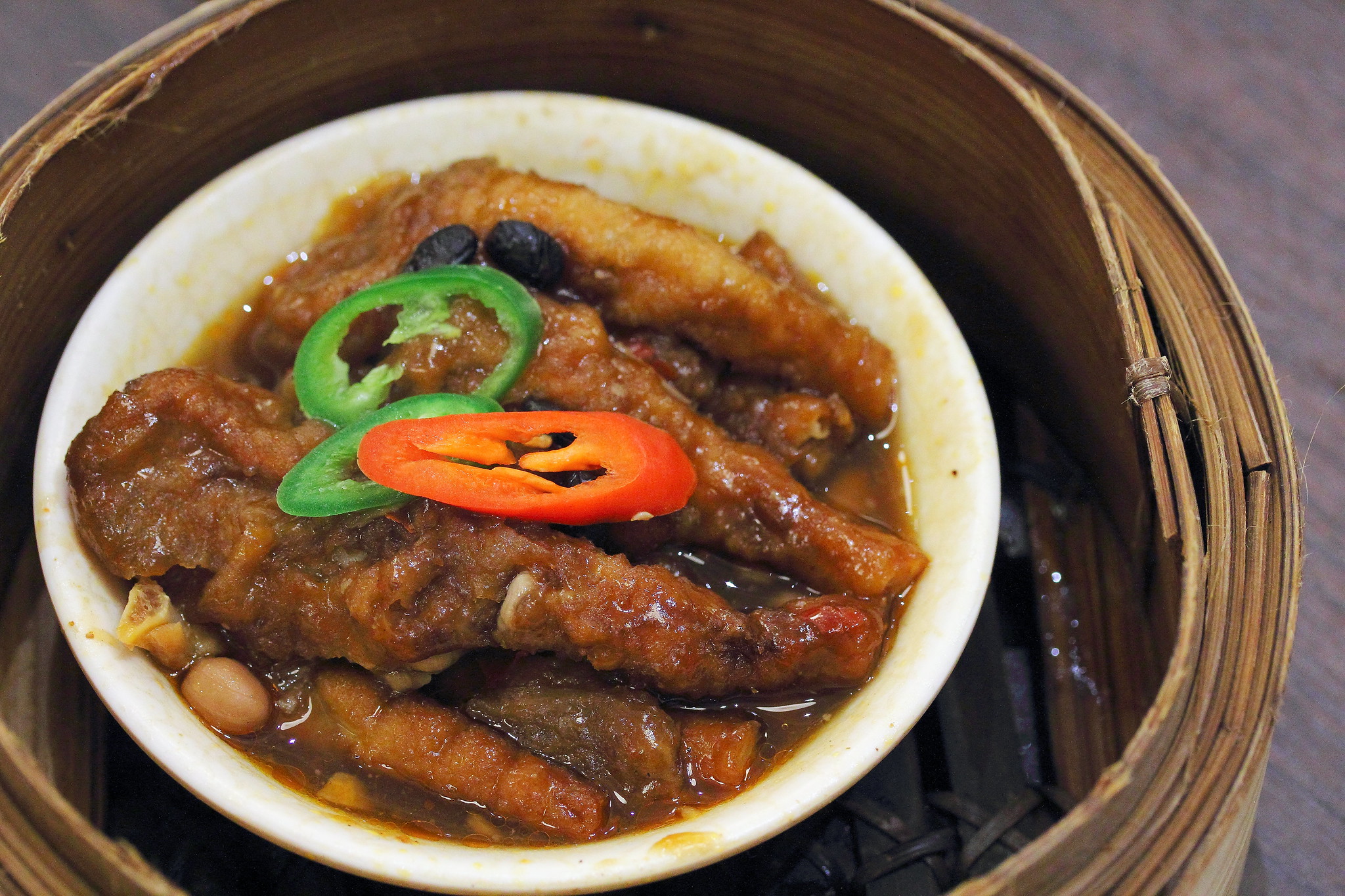 I am big fan for Chicken Claws in Black Bean Sauce ($4). This is well cooked until soft, infused with the flavourful black bean sauce. 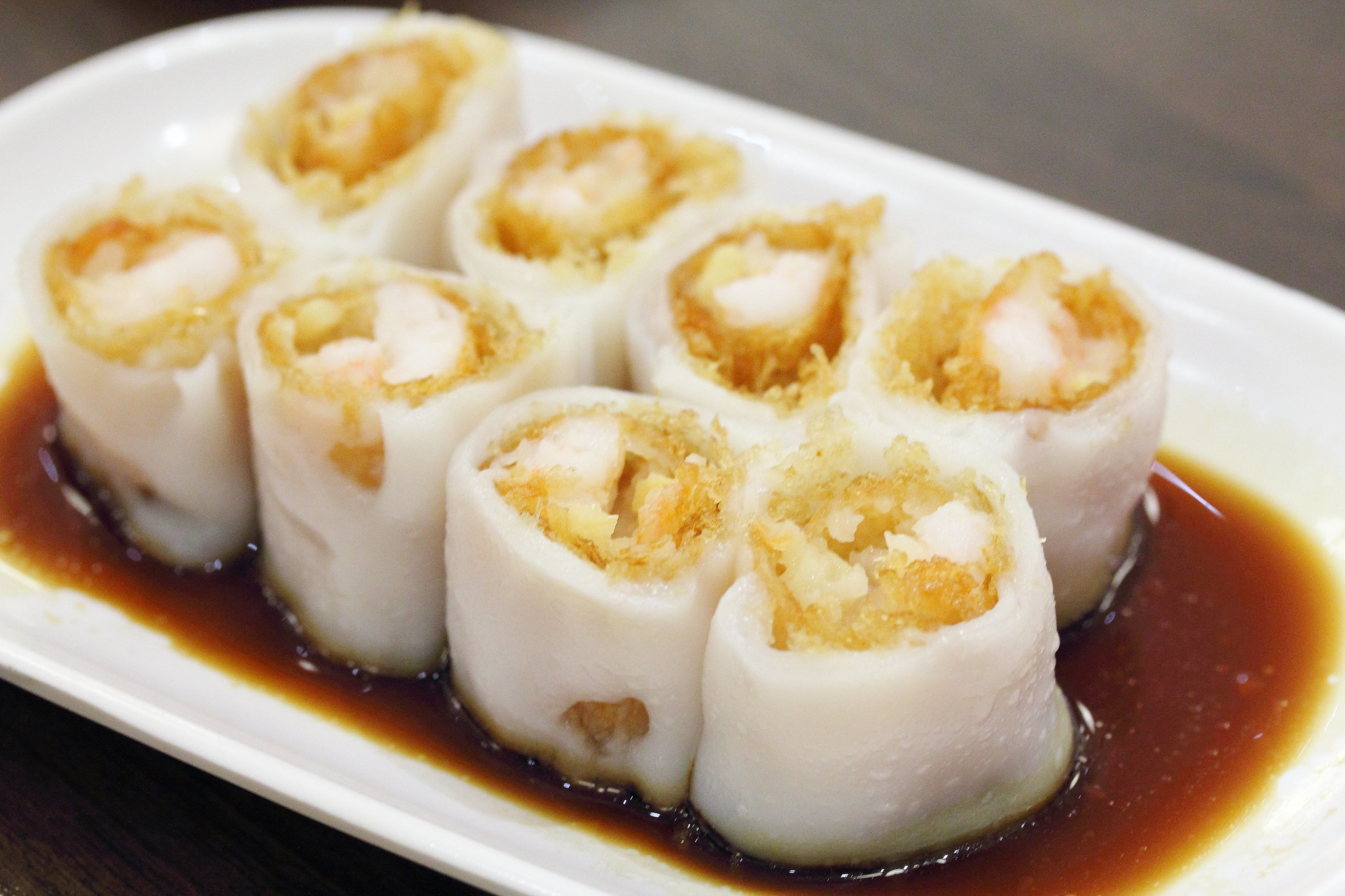 Zha Liang is a popular dish in Hong Kong wrapping rice flour roll around youtiao. It has been given a little tweak,  substituting the youtiao with deep fried shrimp spring rolls. I feel the version of Rice Flour Roll with Deep Fried Shrimp Spring Rolls ($5.50) is actually quite clever, giving it a more crunchy and crispy internal. 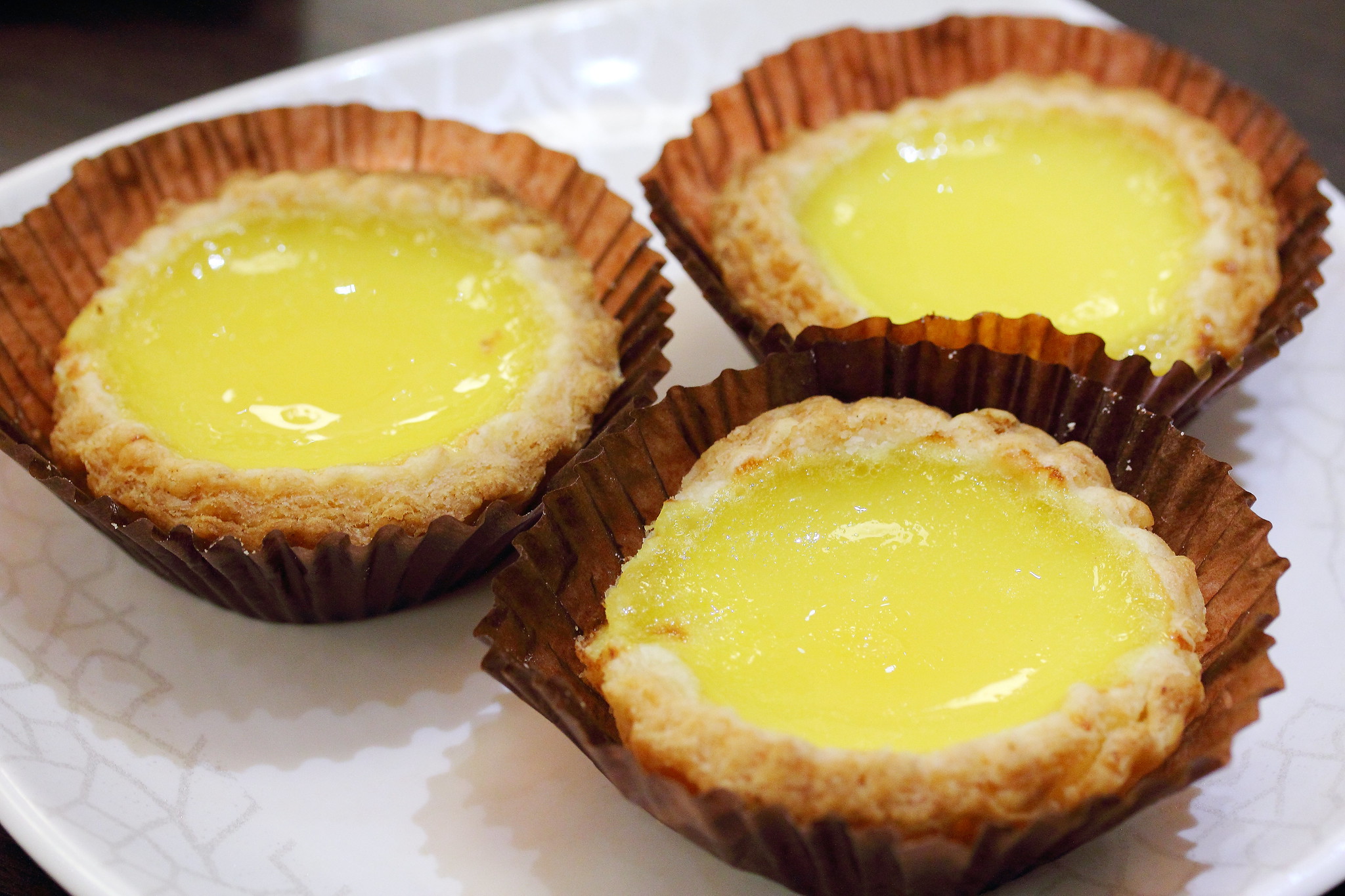 From the bakery section, we tried both the Crispy Egg Tart ($1.80/pc) and Custard Crush Buns with Salted Egg Yolk ($5 for 3pc). Having been recently to Hong Kong and tried the Honolulu Cafe's egg tart, my standard has been raised. While I have a high benchmark, the flaky egg tart is not far off. It definitely one of the better ones I have eaten and I like it. 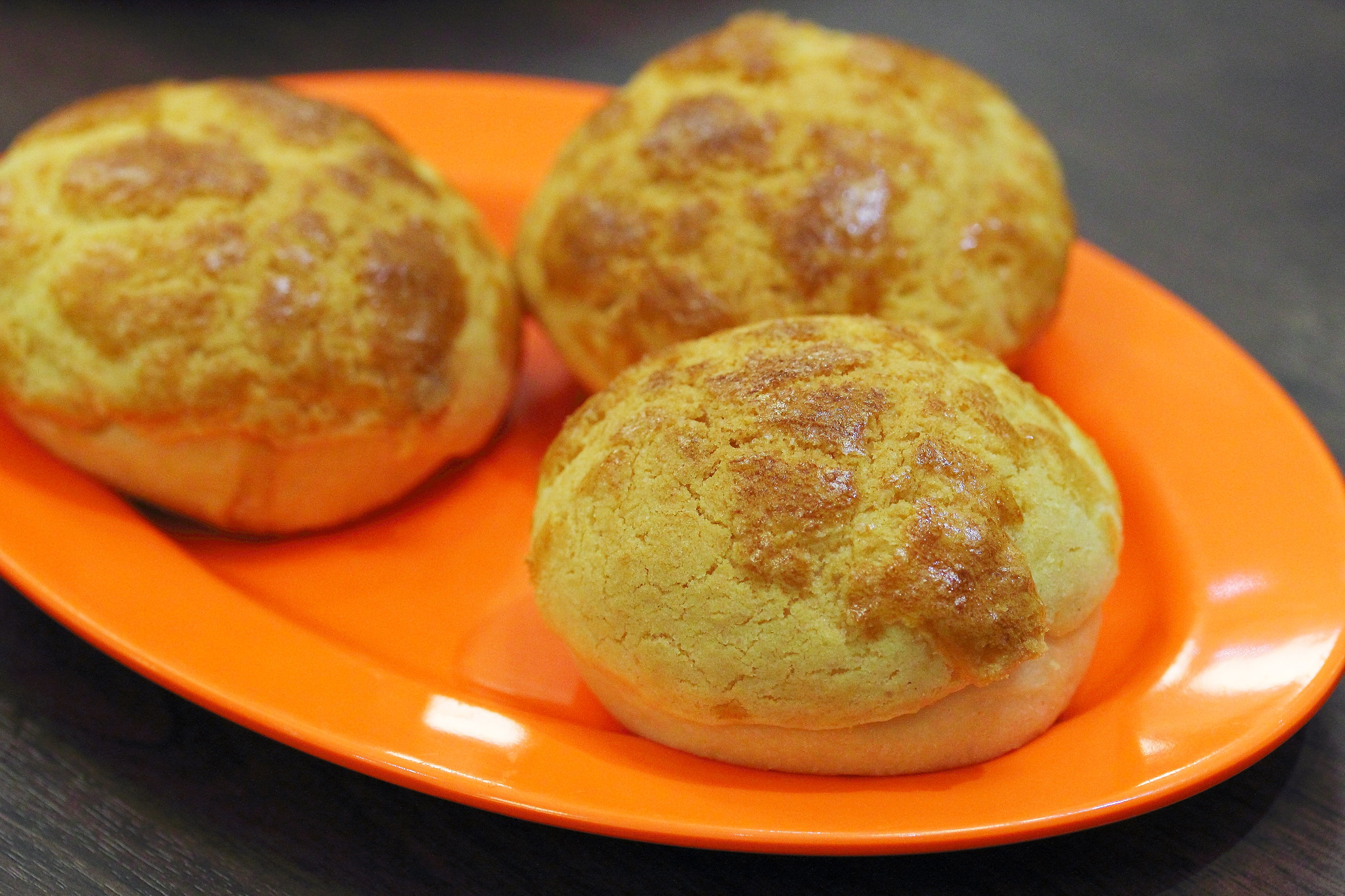 Mini Custard Crust Buns with Salted Egg Yolk ($5 for 3pc) is another interesting creation at Legendary Hong Kong. This is a 2 in 1 bun with the combination of Bo Lo Bao and Liu Sha Bao. Inside the bun is molten salted egg yolk filling but unfortunately it did not flow. 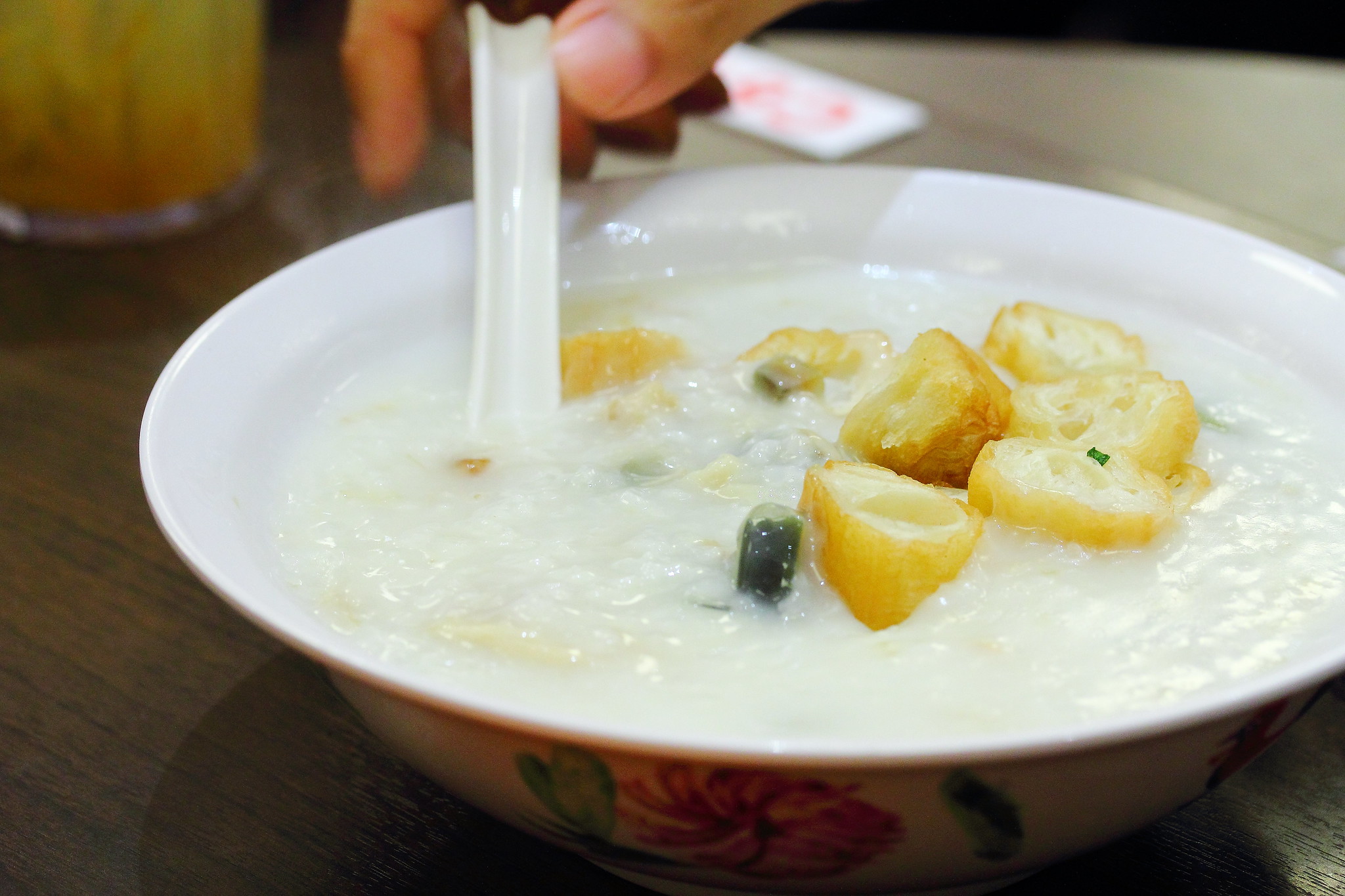 I was expecting the Congee with Century Egg & Pork ($6.80) to be plain but the comforting bowl of congee was actually well seasoned and flavourful with a smooth texture. 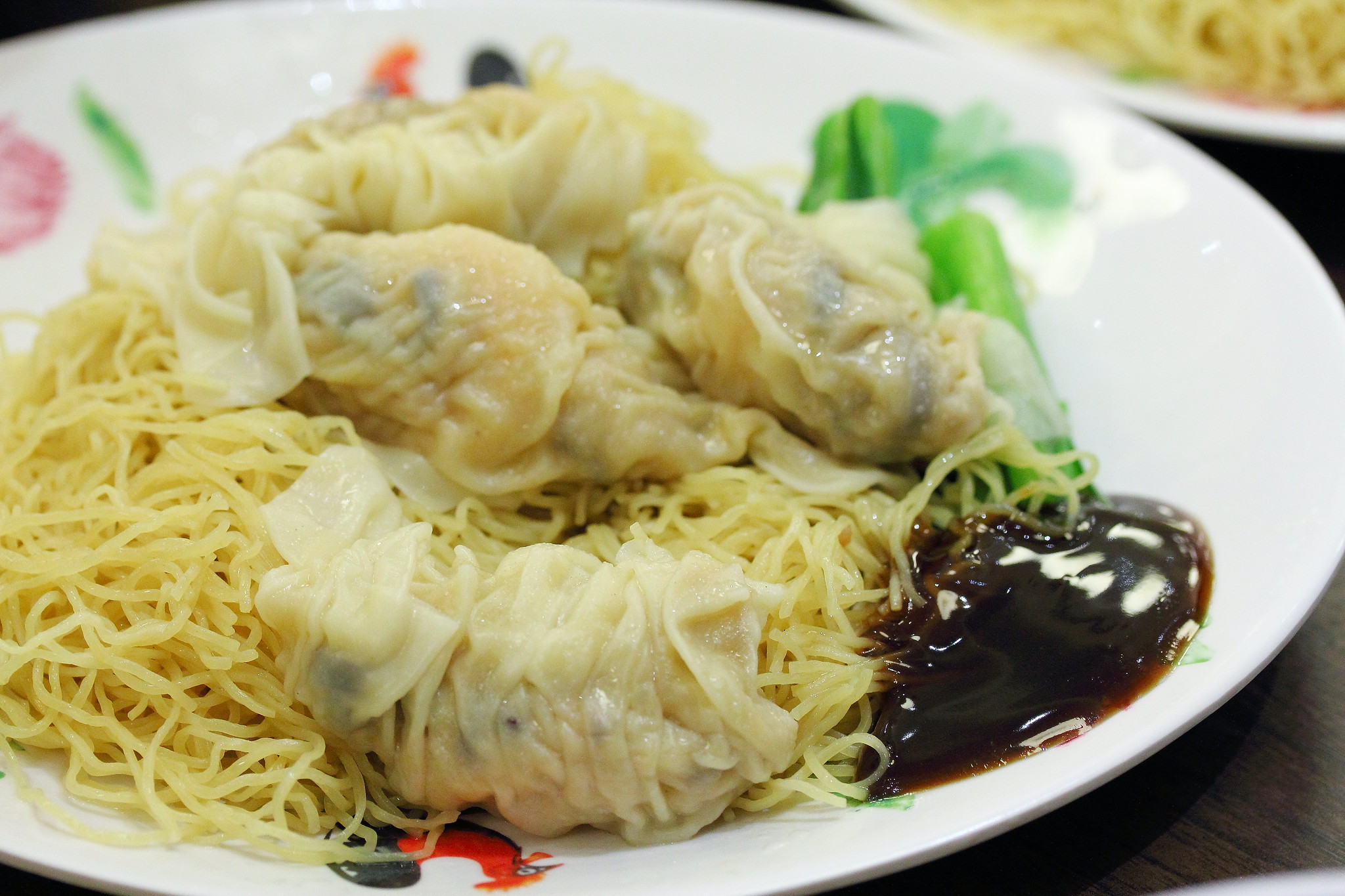 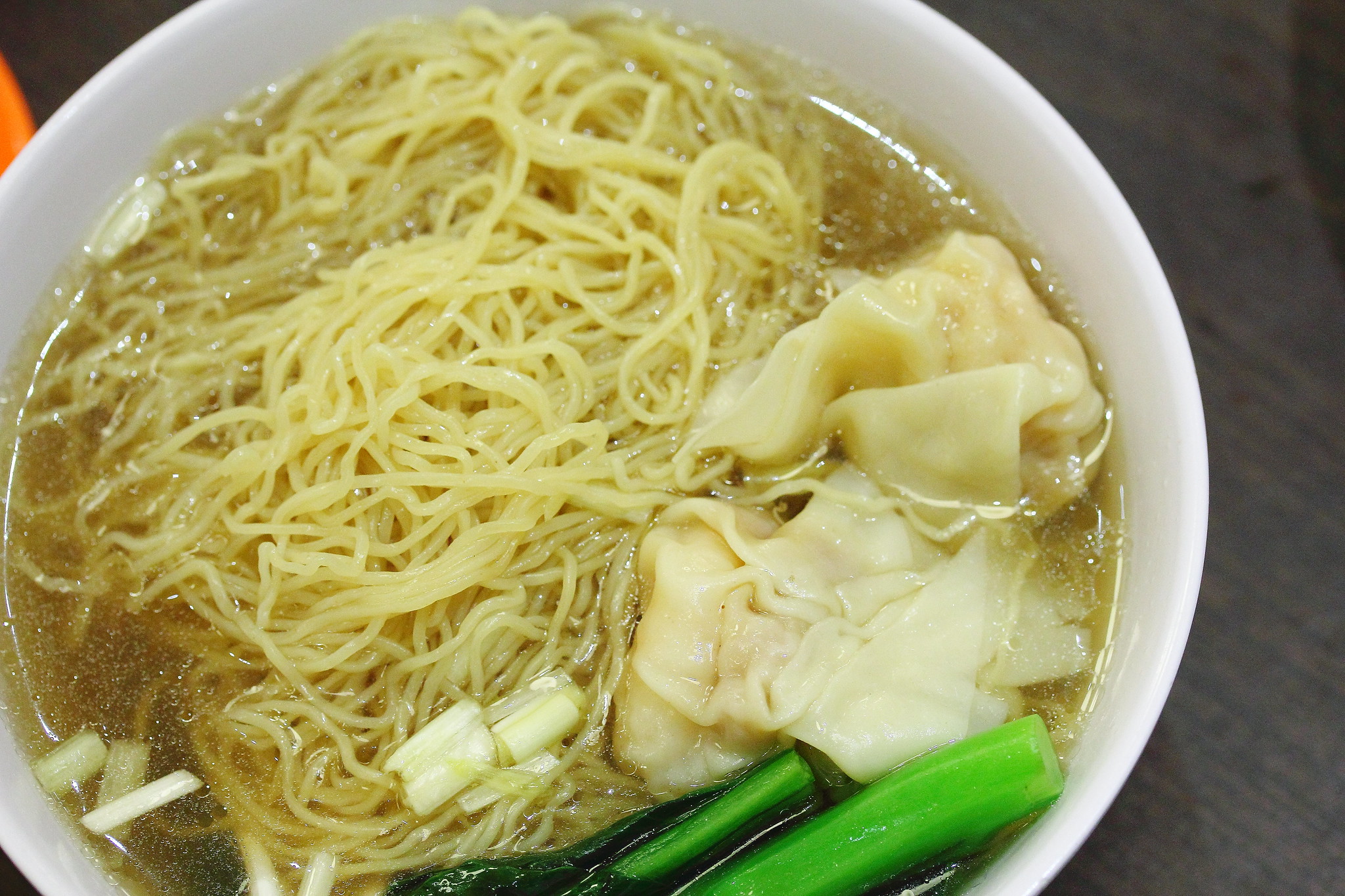 My recently trip to Hong Kong also brought me to Mak's Noodles in Hong Kong. I am really excited that chef making the wanton noodles at Legendary Hong Kong is from Mak's Noodles. I tried both the Tossed Shrimp Dumpling Noodle ($7.80) and Wanton Noodle Soup ($6.80) and I preferred the later more. However I did notice some slight difference in the bowl of noodle. The texture of noodles I had in Hong Kong seems even finer and also hair-like thin, here is a bit thicker. The wanton is wrapped into a ball shape, here has a loose end probably means less shrimp is used. Saying that the noodles itself is still thin and springy, very similar to what I had in Hong Kong. The chef also insisted of using shrimp for its wanton instead of pork which is more common in Singapore. 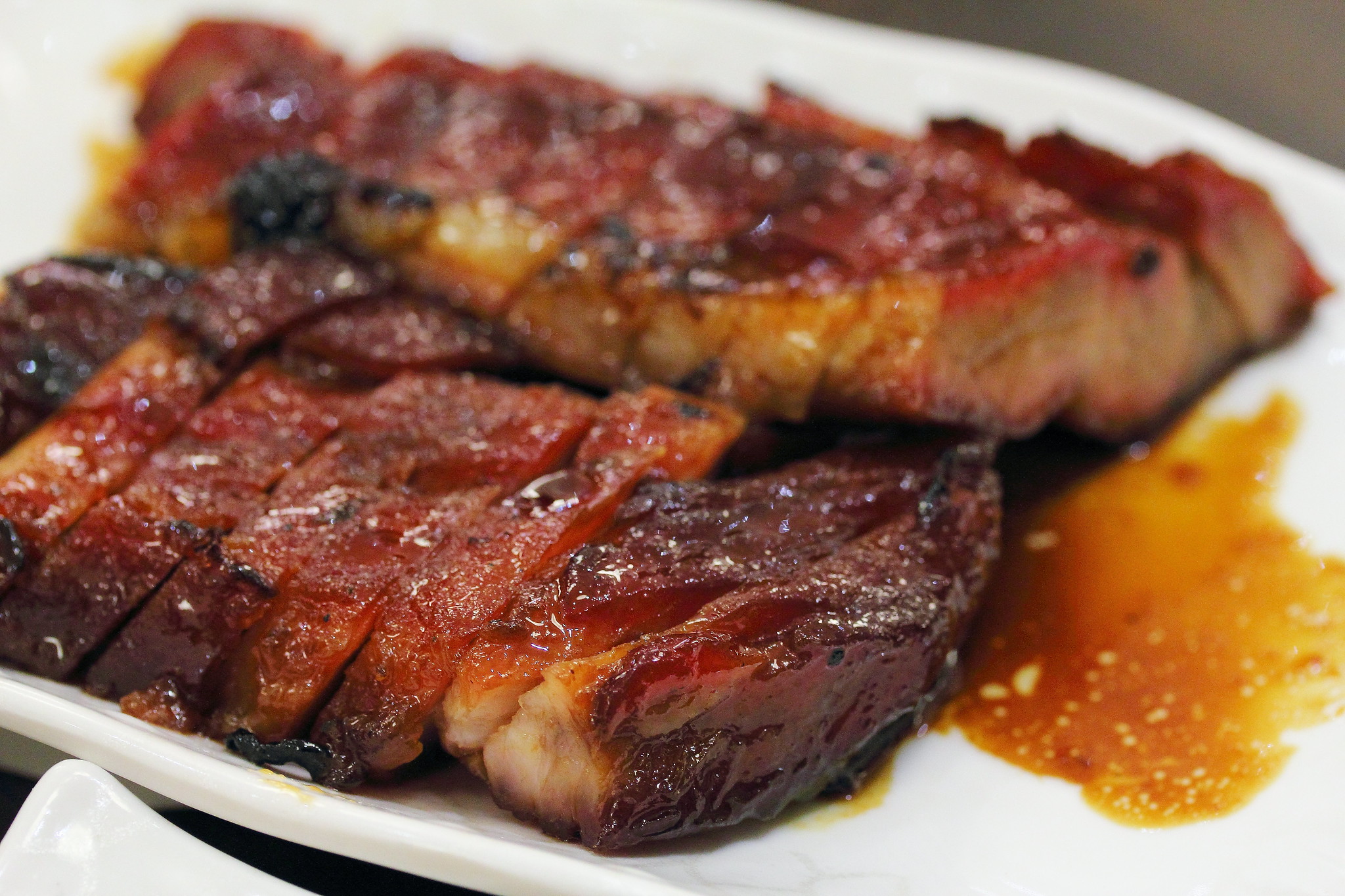 Last but at least the Roasted Meat section. The Barbecued Pork ($10.80) was rather pedestrian. I felt that the barbecued pork lacked the smoky charred aroma or it will be excellent. 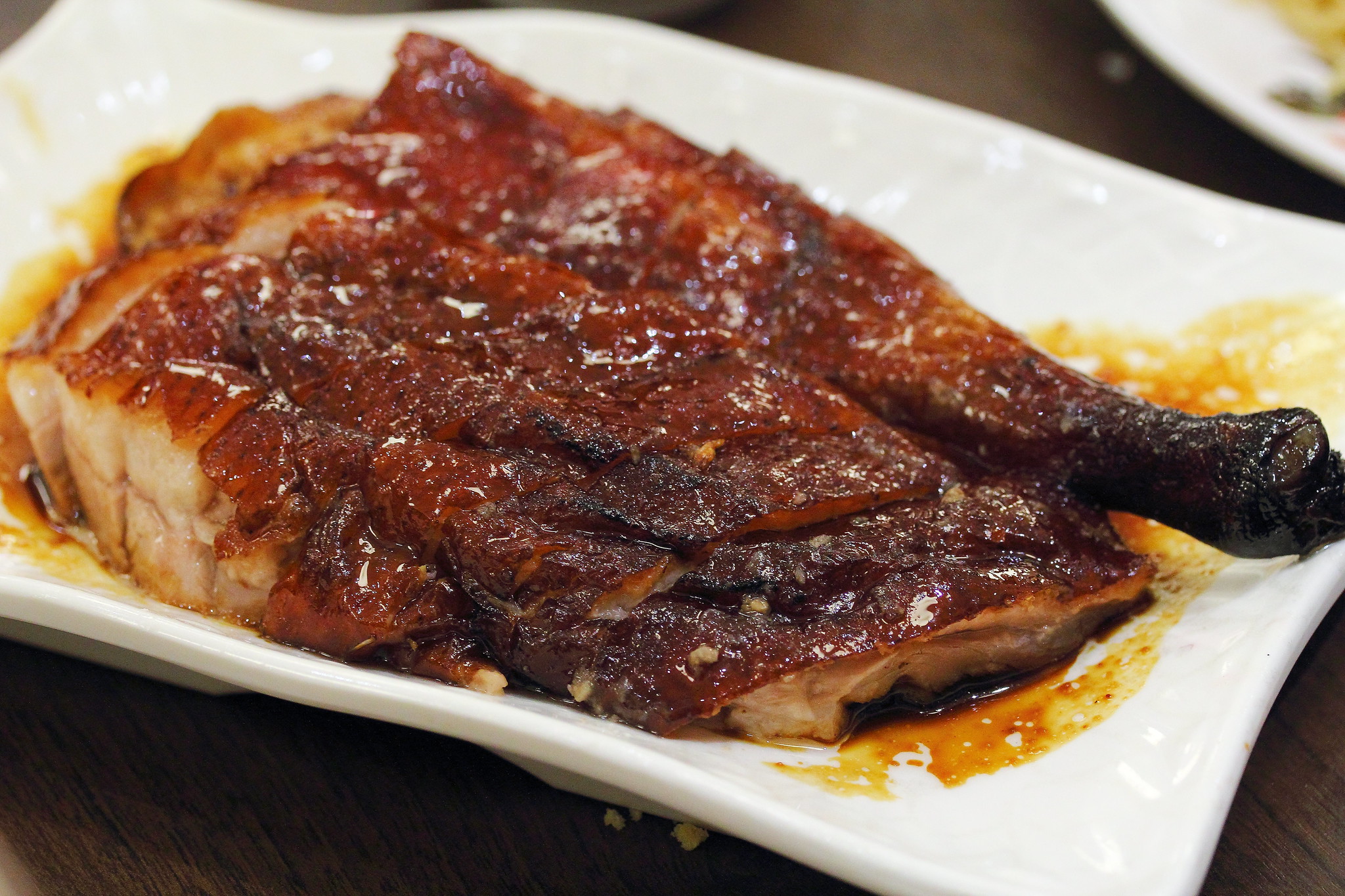 Not to be missed at Legendary Hong Kong has to be the Roasted London Duck ($14.80 per portion). The duck is specially imported from Ireland Silver Hill Farm. The first thing I noticed is a lay of fat between the skin and meat. It is like a layer of jelly which we get from Hainanese Chicken, oily but not greasy. The meat itself is also more succulent. If I can draw a comparison, it is like having pork from a suckling pig. This is definitely a must try.

If you are craving for Hong Kong cuisine, Legendary Hong Kong is definitely a good choice to satisfy your craving. The all in one concept means that they are over 300 over dishes in the menu ranging from Hong Kong cafe, dim sum, congee and noodles, bakery and roasted meat. Without flying to Hong Kong, the delicious food is served to your table.