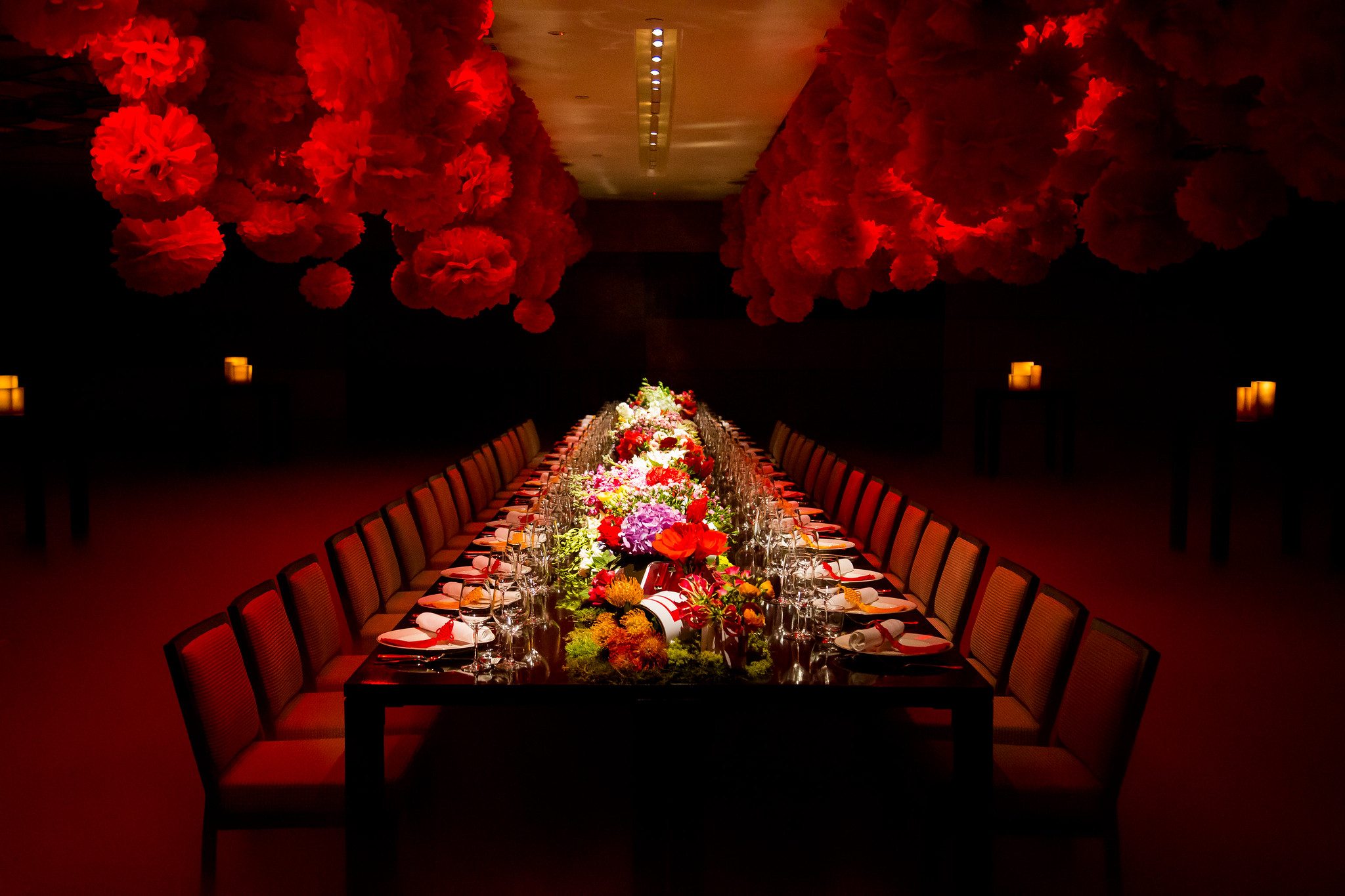 What is your idea of "Living Grand"?

At Grand Hyatt, "Living Grand" is the promise to unlock the extraordinary by creating spectacular moments, be it big or small. I have no doubts that this established hotel brand has delivered its promises because I had an extraordinary, or no, it should be a super extraordinary Chinese New Year celebration at Grand Hyatt Singapore.

In fact, now as I recalled that night, everything felt too magical to be true. I attended Grand Hyatt SG's inaugural "Living Grand" dinner, which was described to be a Chinese New Year celebration. So what I had in my mind was a 10-course traditional Chinese New Year meal. Since the dress code was festive cocktail, it could be something more casual with cocktail drinks and canapés? Maybe? 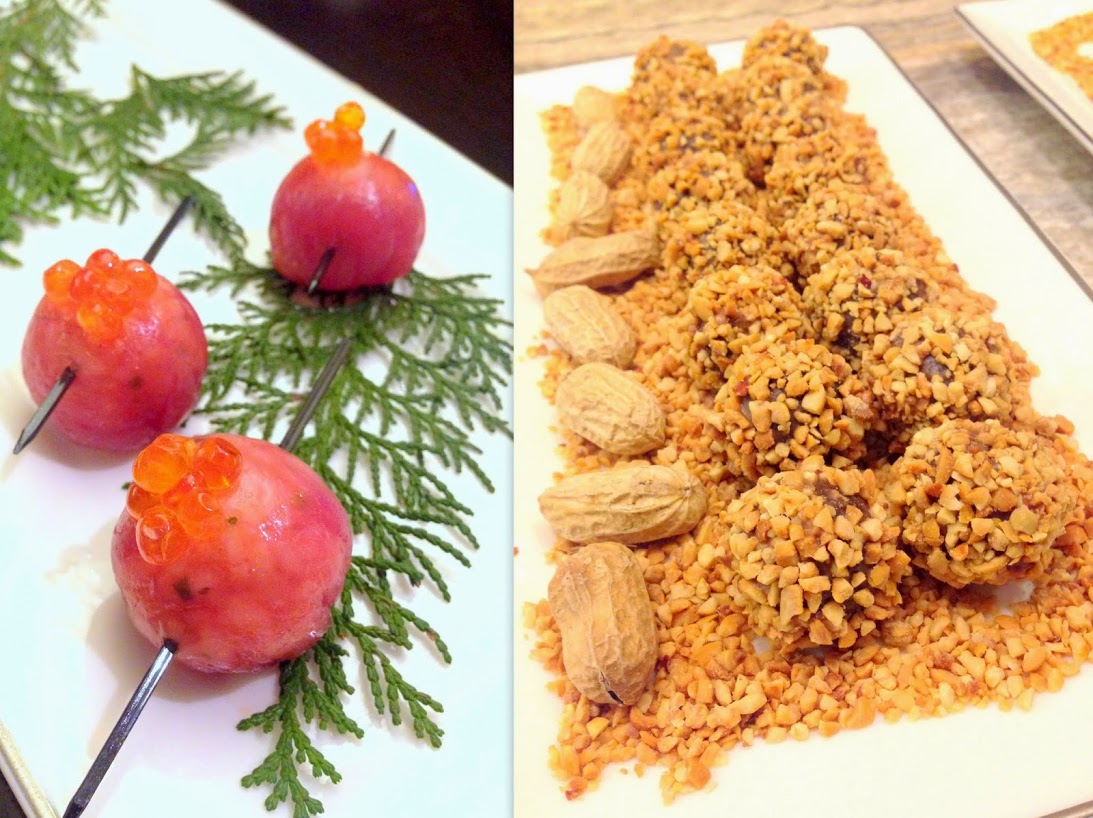 Before the start of the dinner, guests were gathered outside the Grand Salon, a newly refurbished function space that is designed in such a way that one feels as if he/she is coming back home. Everything was kept strictly confidential and no one had a clue on what would happen that night. Waiters were dressed in neatly pleated traditional Chinese costumes that looked so polished that they could reflect light. 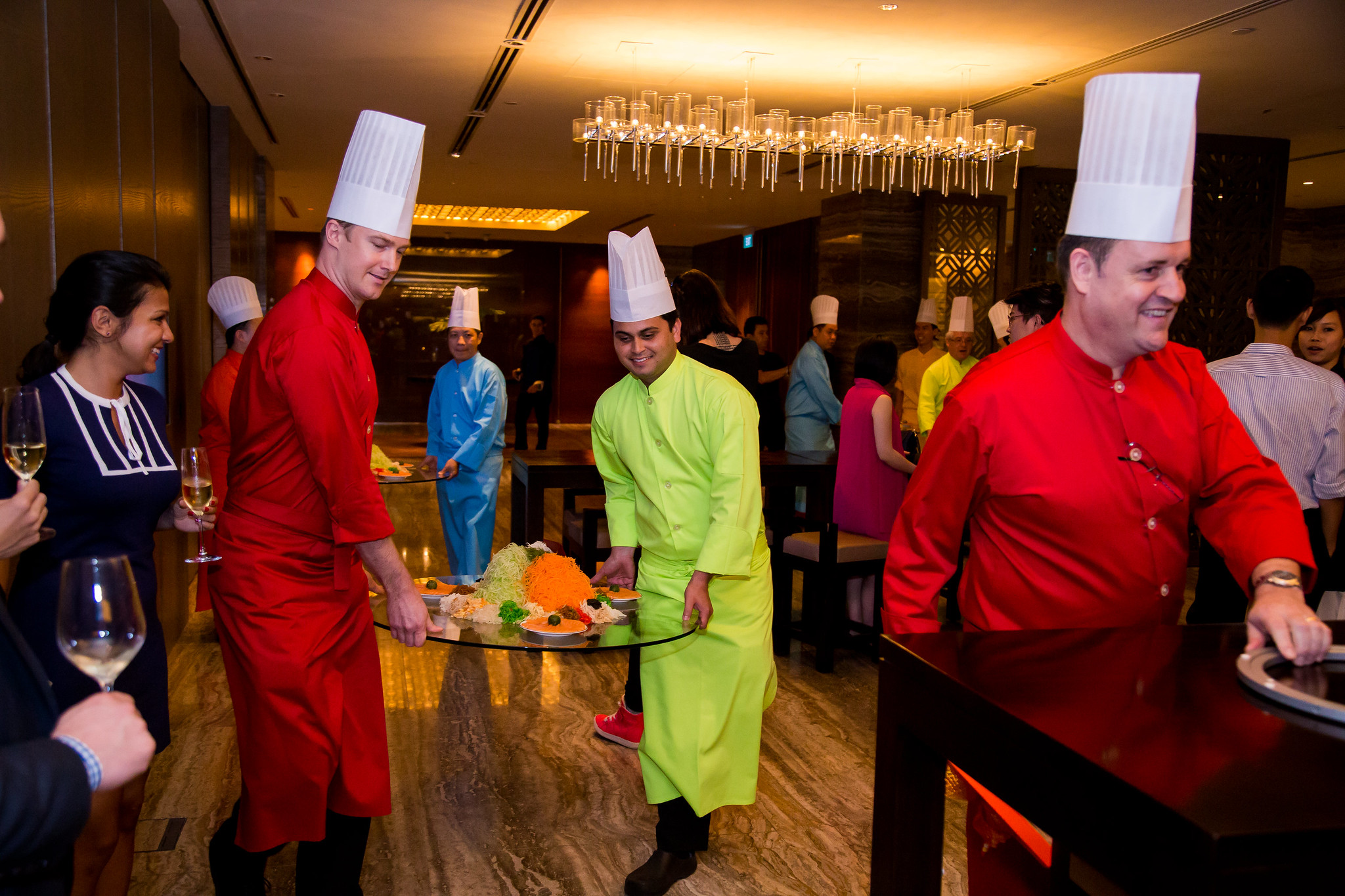 As the time draw close to 8pm, the executive head chef of the night, Chef Lucas Granville, led his troops to shift in 4 massive sets of lavish Yu-Sheng. After the ritualistic toss to an abundant year ahead, the lights started to dim and it was total darkness. In a moment, the automated doors slid opened and a sea of red mist greeted us. 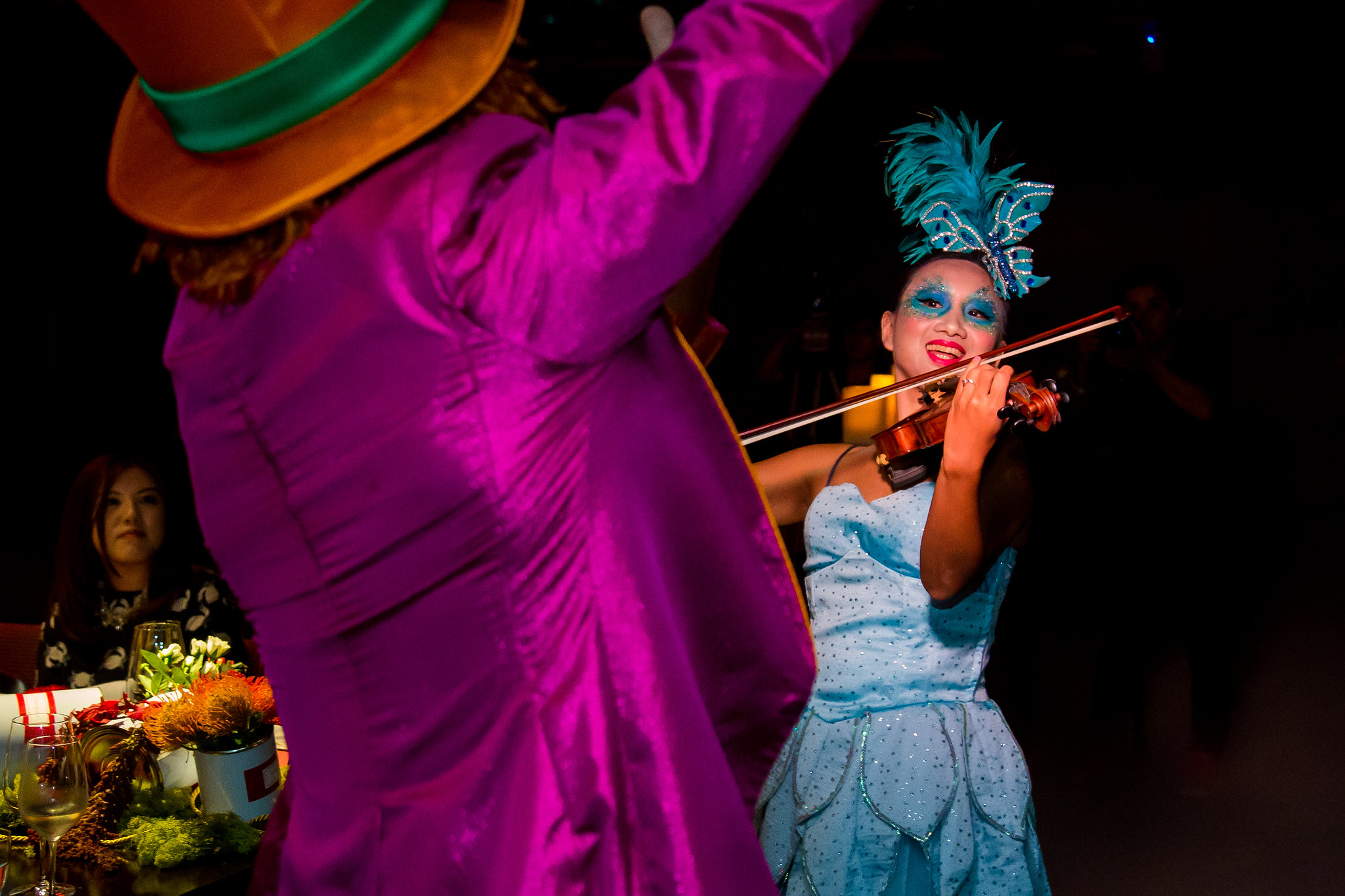 I saw a fairy dancing, another playing the violin, and another guy that looked like the Mad Hatter. Had we been teleported into another wonderland? I was spellbound by everything around me as I navigated my way in the magical garden to find my delegated seat. 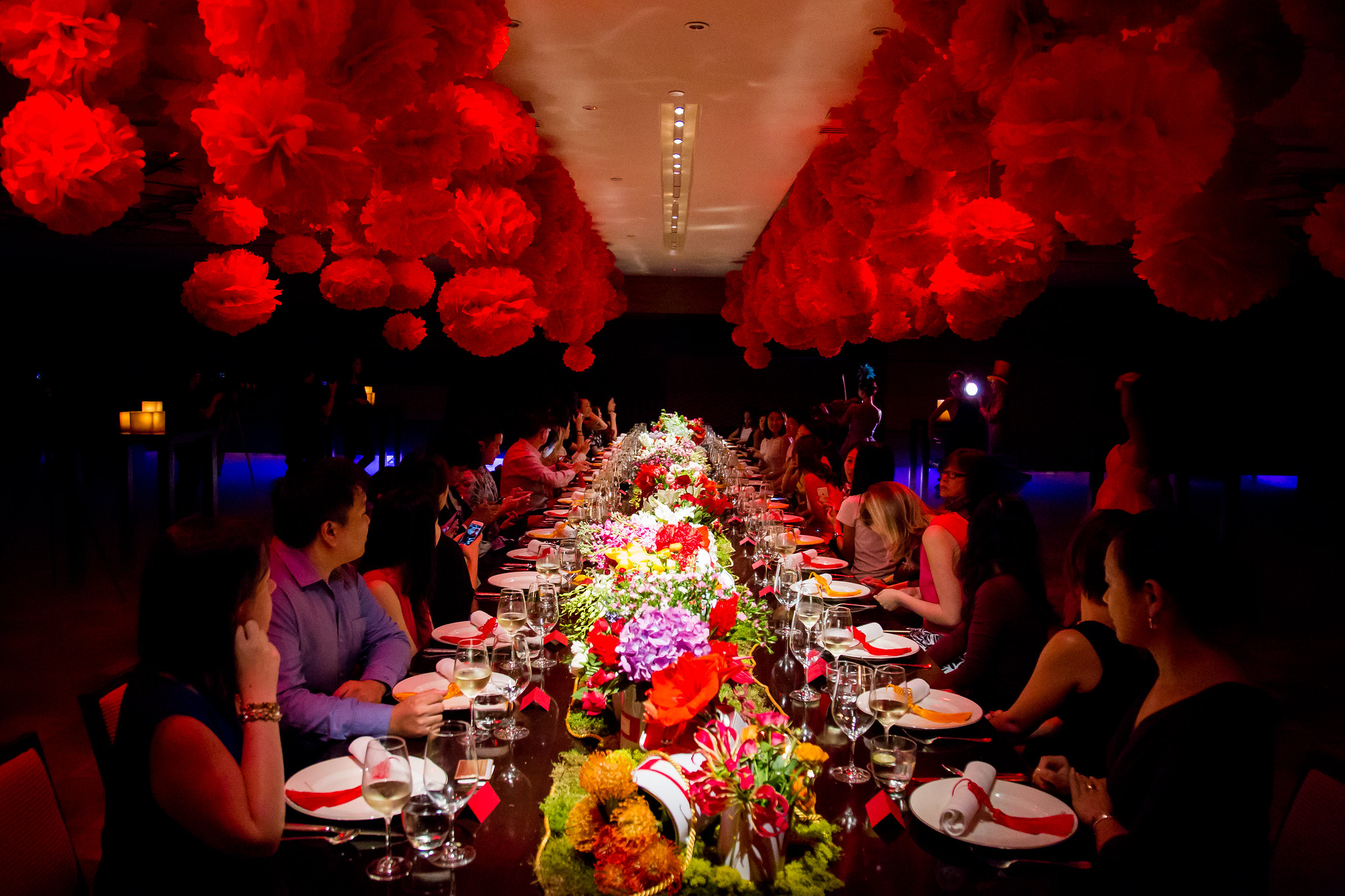 26 guests sat opposite each other on a lavishly decorated table lined with fresh, spring flowers. Little did we realize that this was only the beginning of a series of surprise. After everyone has settled down and the General Manager of Grand Hyatt Singapore made his speech the start of the dinner, the second surprise took place. 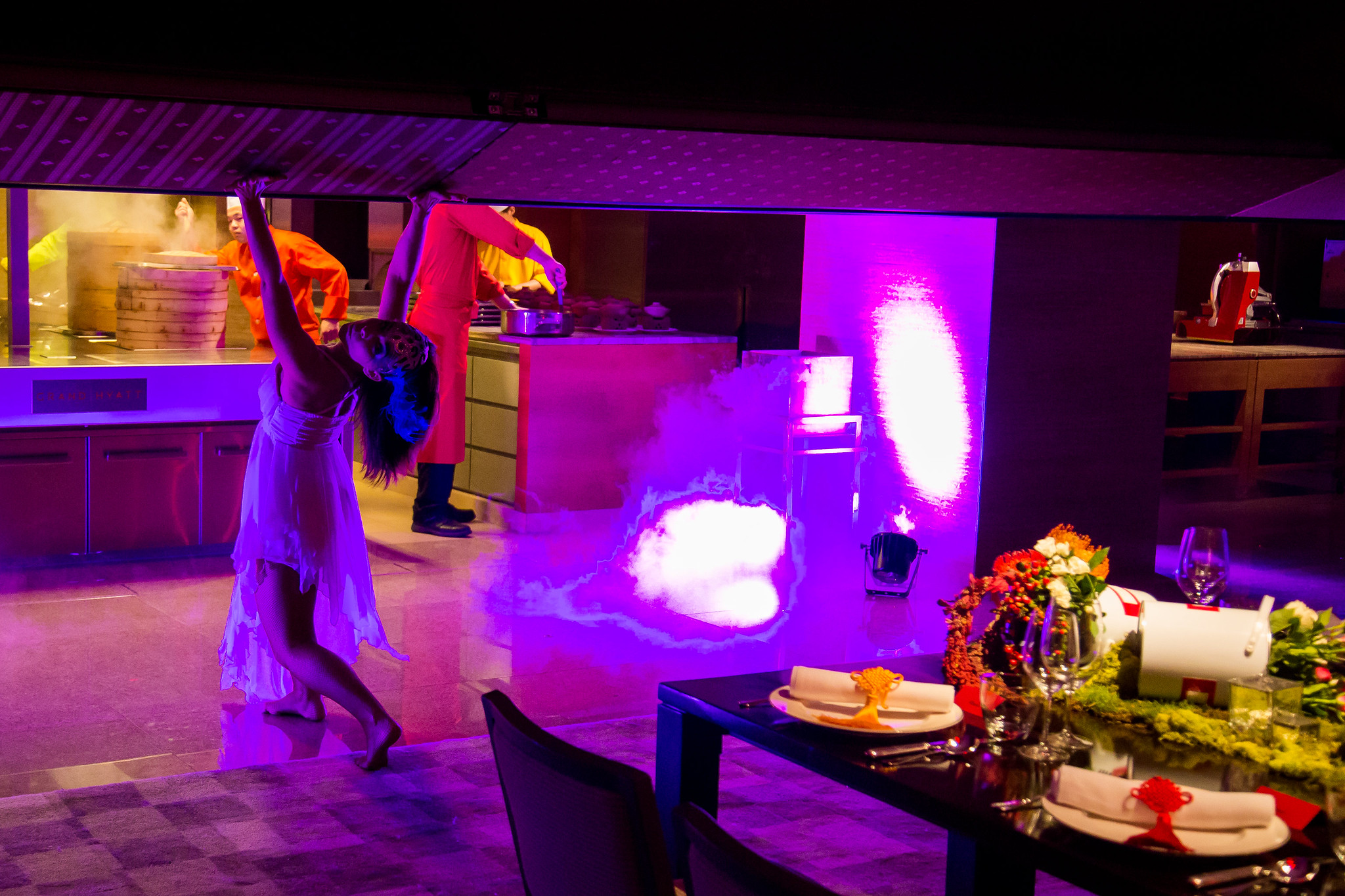 Another door opened amidst the purple clouds and we saw a live kitchen right in front of us! 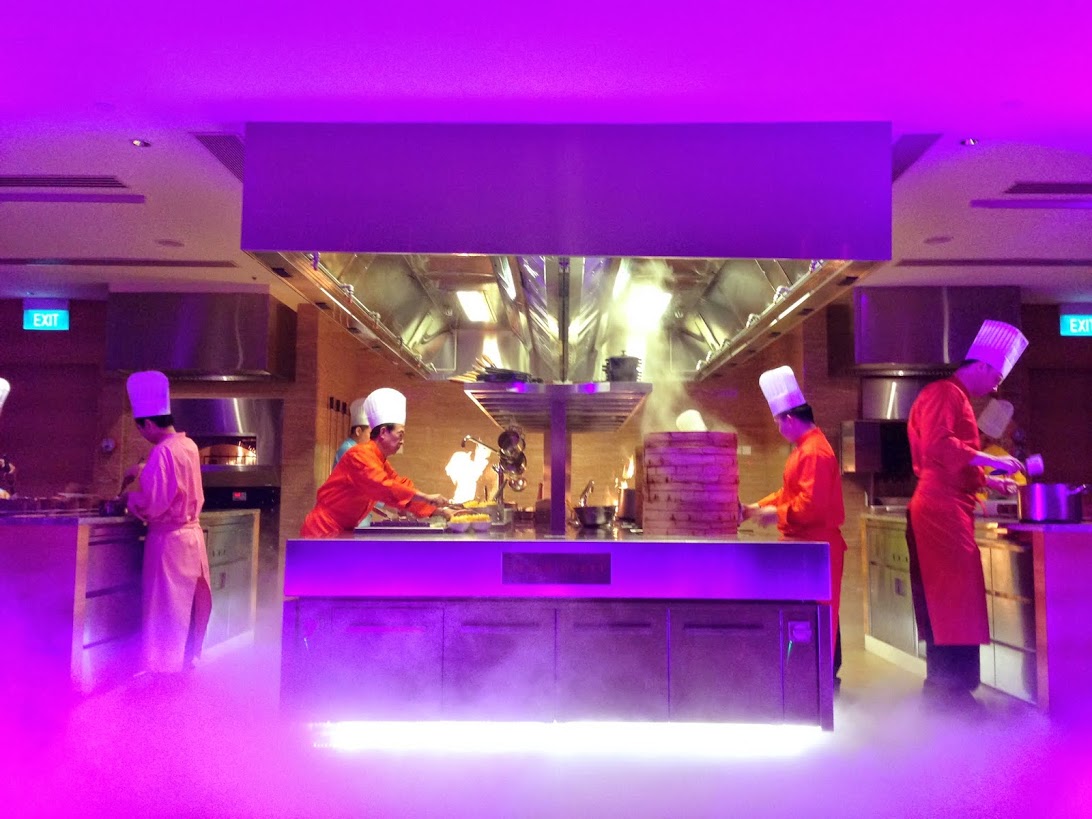 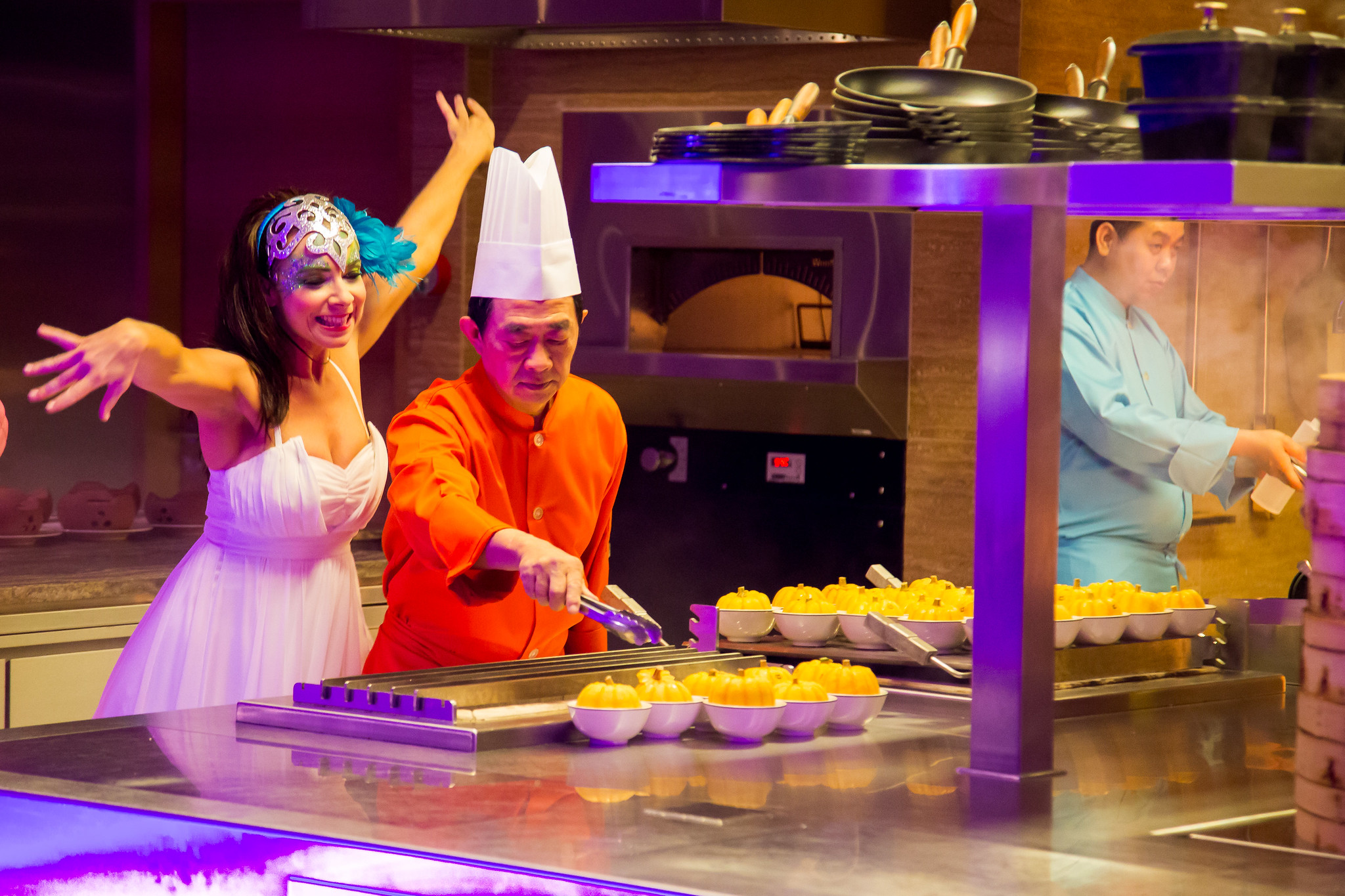 But the chefs seemed to be casted with an immovable spell and this spell was only broken after a light tap by the fairy dancer. 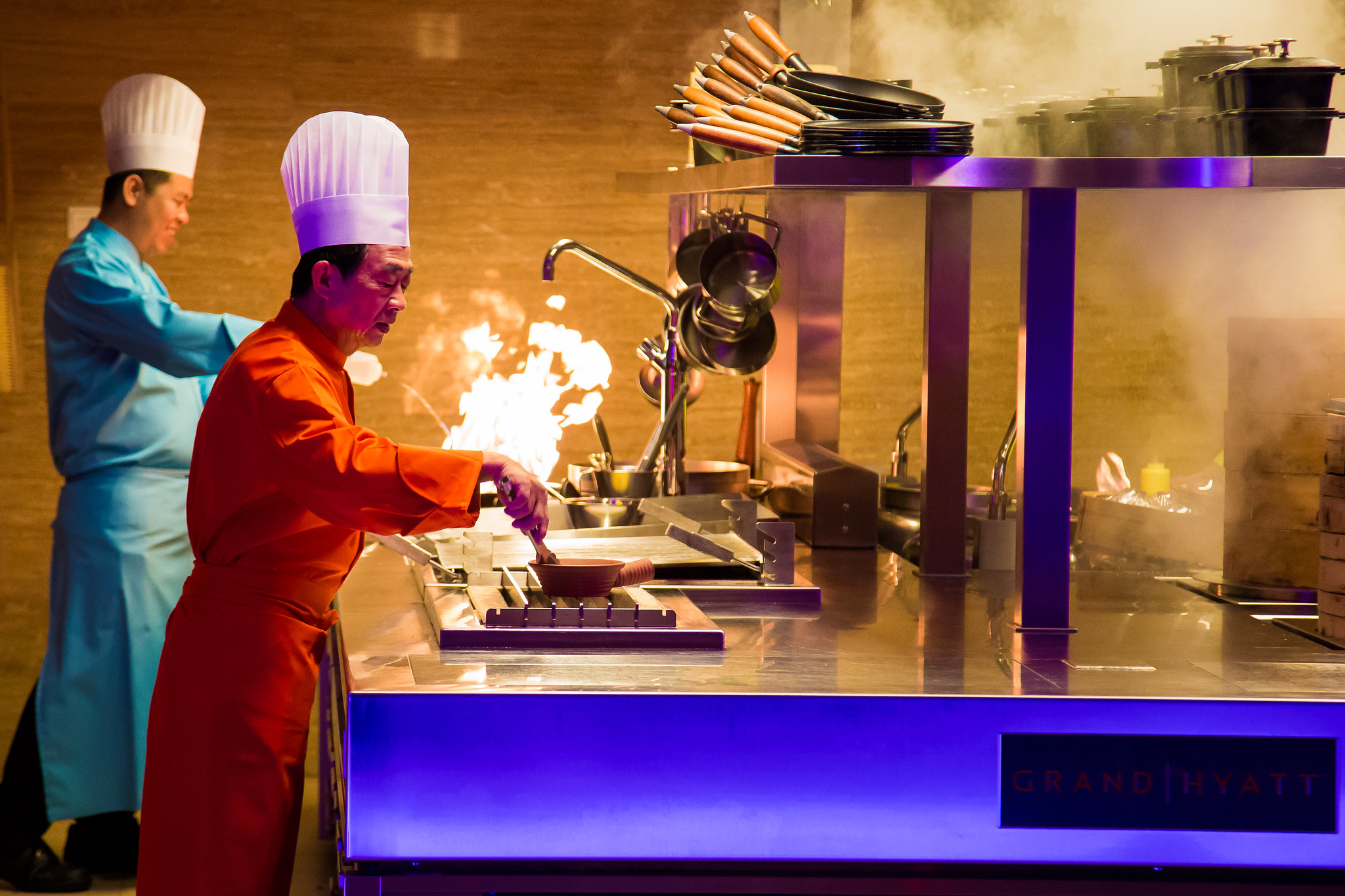 With the kitchen springing into action, everyone was eagerly looking forward to what would be served on the tables. Chinese? Fusion? Or even some weird Molecular dishes? Contrary to the carnival mood, the dishes were rooted in Chinese traditional cuisine. 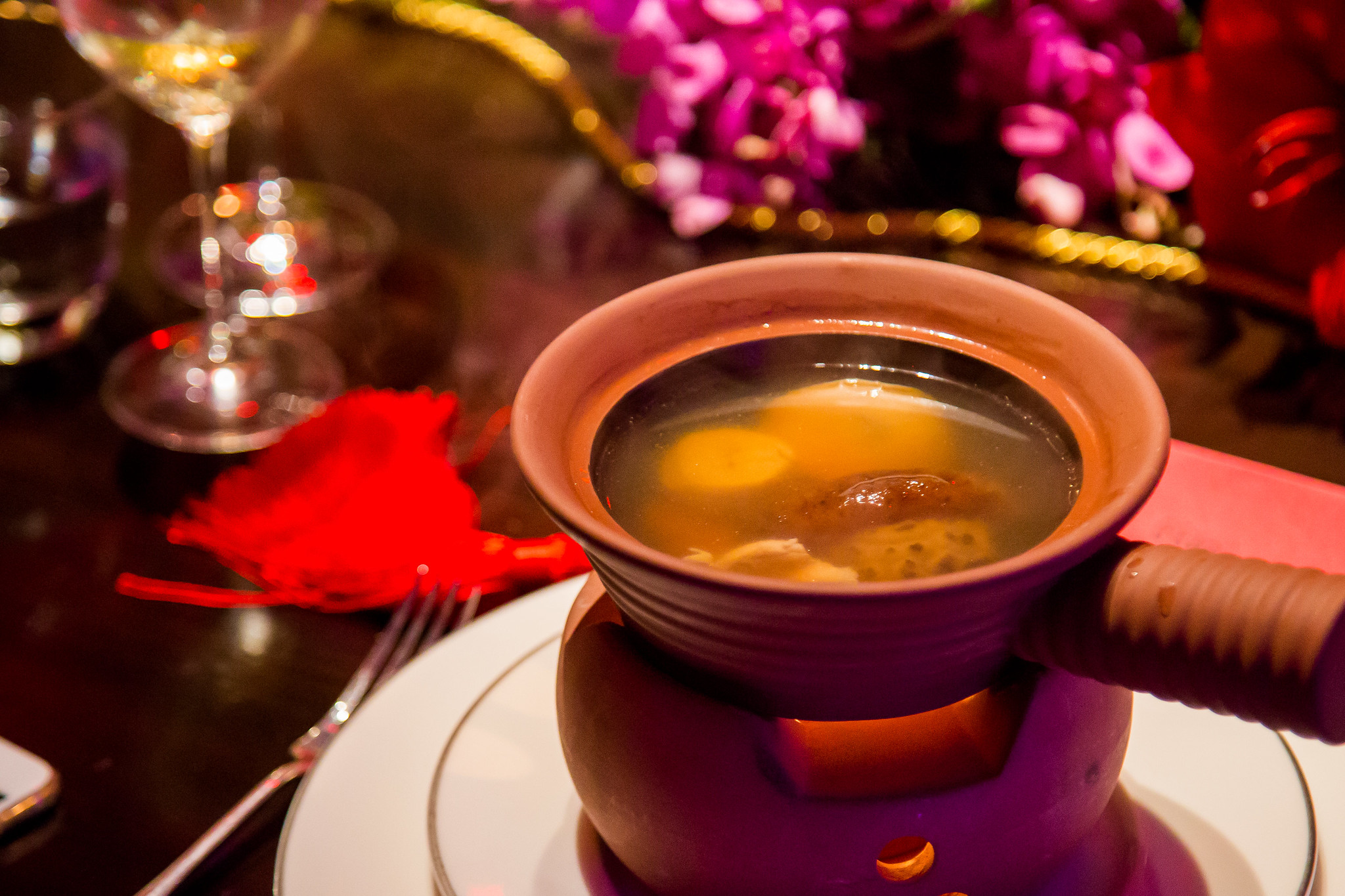 Our first course was Buddha Jumps over the Wall, a classic nourishing chicken broth that showcases 100% sustainable seafood. It was so comforting to sip on the warm soup that was brimming with the natural sweetness of the sea treasures. 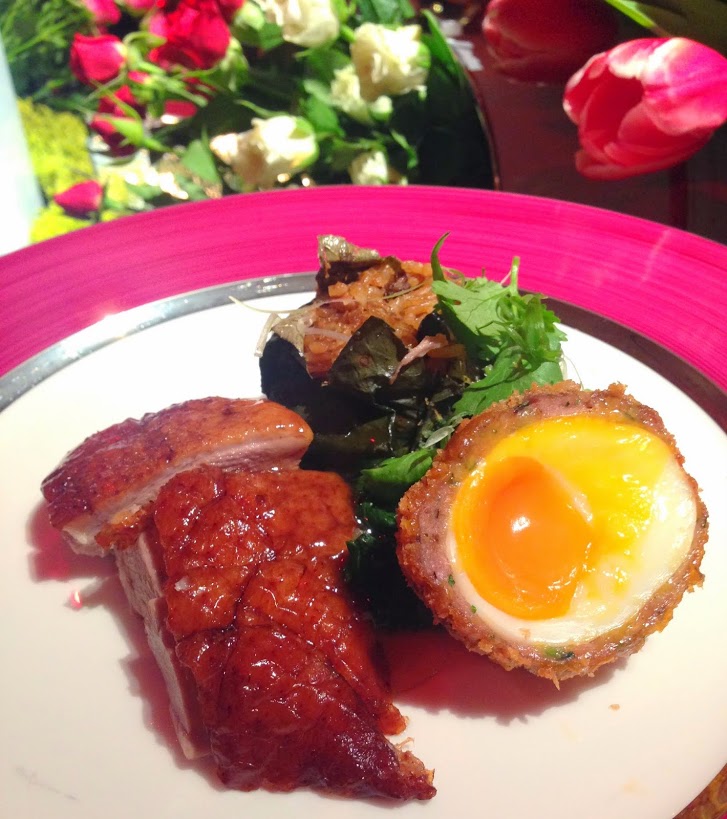 Next, we had the Roast Chinese Duck served with lotus rice on water spinach. Though the duck was a little dry and overdone, the lotus rice was excellent, boasting grains that resolutely separate with no trace of grease. The crispy chicken egg with a fragrant meat coating brought a touch of British sophistication to the dish. 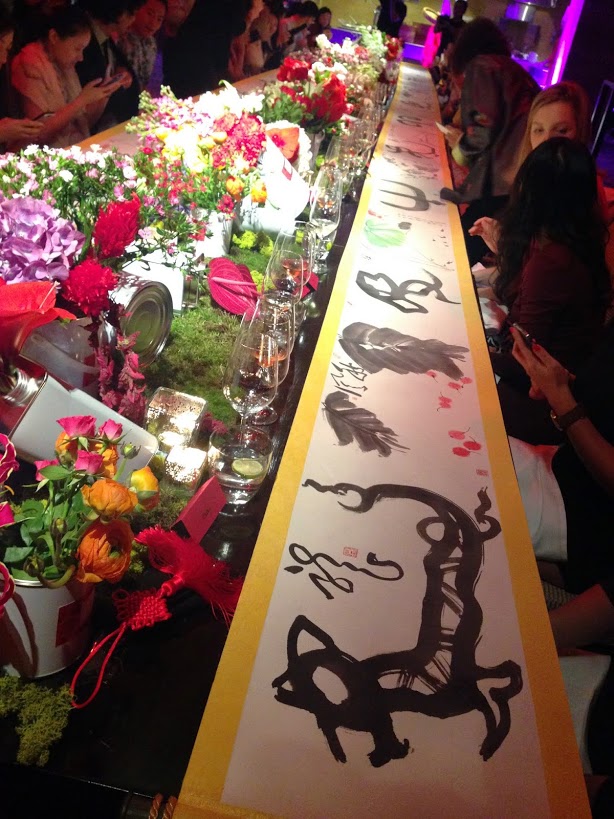 The climax arrived when everything was cleared from the table and the head chef unveiled a Chinese painting of the 12 zodiac animals on both alleys of the table. A series of traditional Chinese New Year desserts such as the White Lotus Blossom Flower, Buddha’s Hand Lemon and Mango Pudding, Mini Liu Sha Bao, Pineapple Tarts and even Dragon Beard Candy graced the table. My favorite was the “ketupat” that was actually coconut ice cream in disguise! 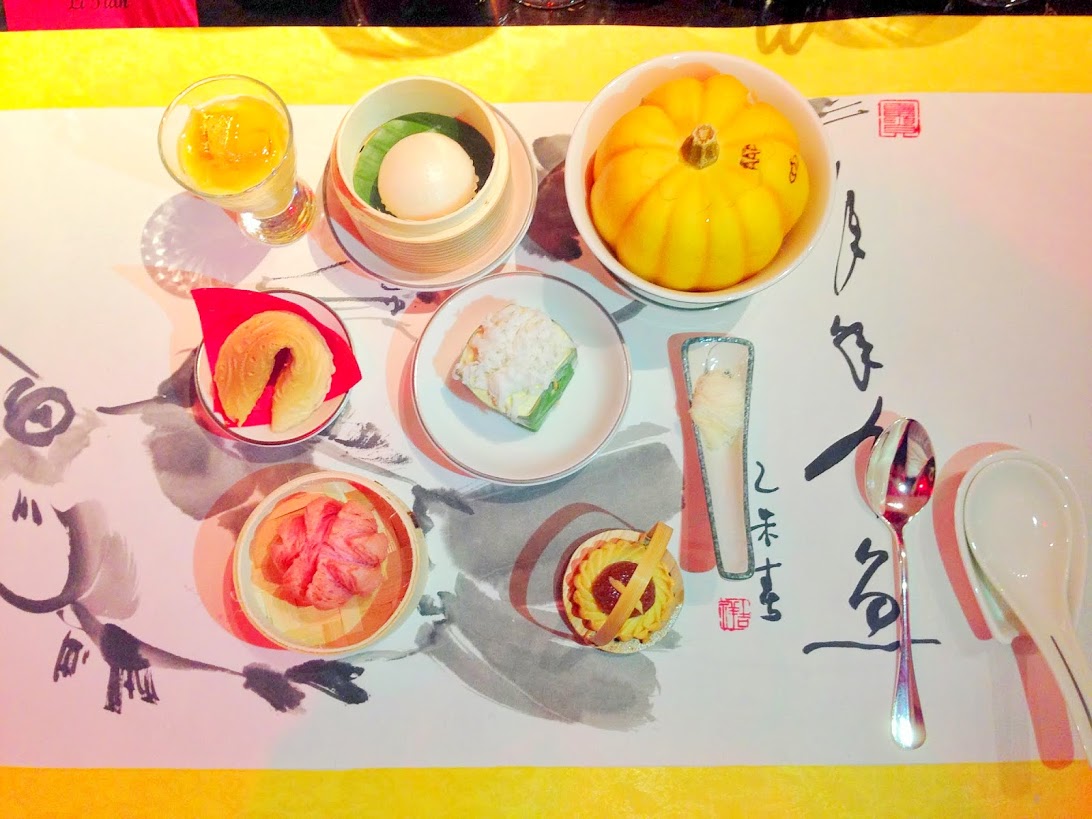 I can feel the passion and enthusiasm flowing in every part of Grand Hyatt as the team had evidently put in a lot of effort to create unforgettable memories for their guests. They have not only redefined my understanding of Chinese New Year, but also opened me to the possibilities that one can have when hosting events at Grand Hyatt Singapore. 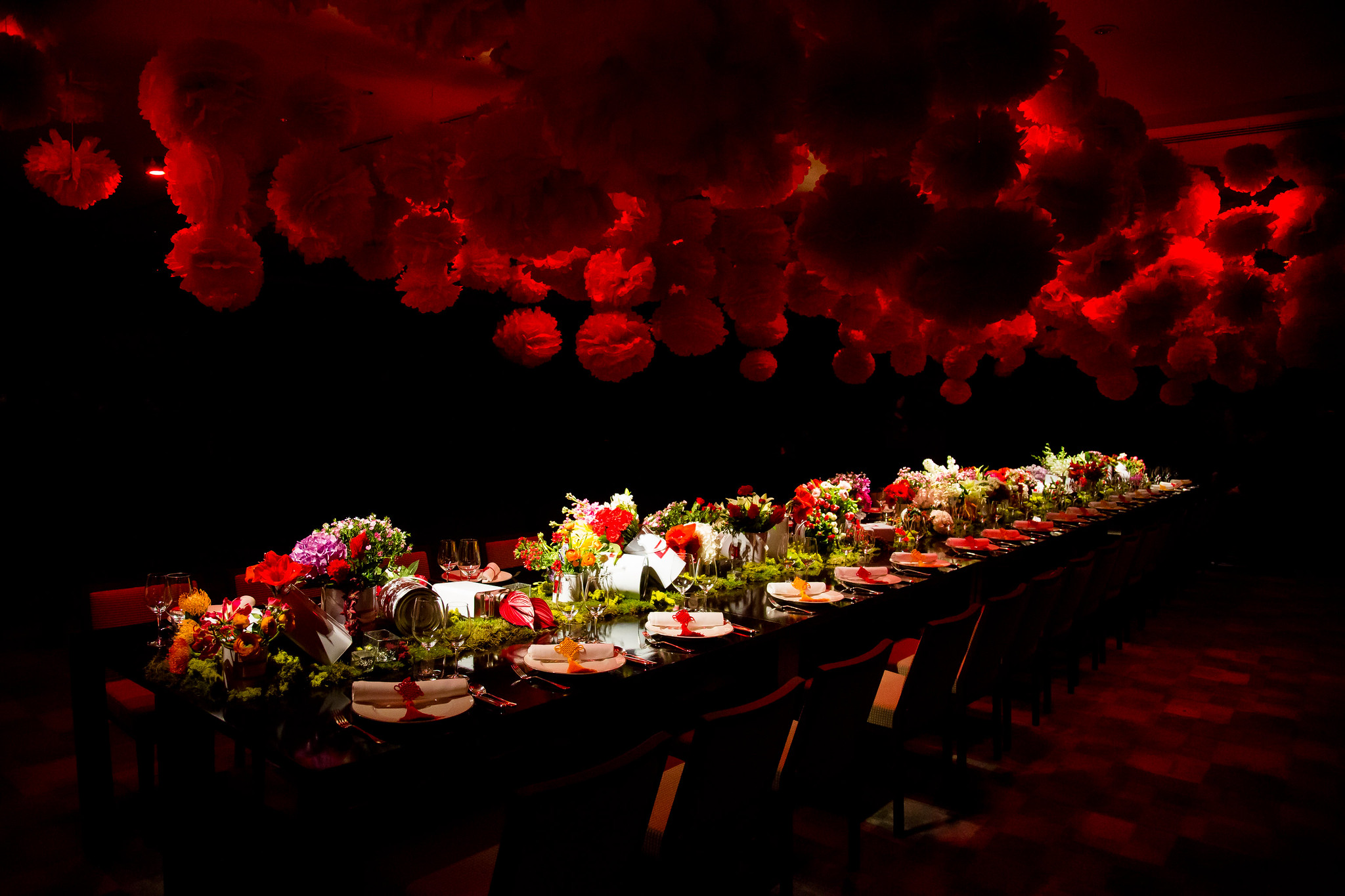 The folks have set the bar so high that makes it difficult for me to find the next experience that can surpass this one. I am not exaggerating but I think this is way beyond the 5-star luxury experience. It is about creating common memories between the guests and the brand, about living in the present, living in the grand moment.

Written and Photograph by Li Tian, a passionate foodie behind Singapore-Japan Food Blog “Dairy & Cream”. Has an eye for pastries and desserts.

Direction:
1) Alight at Orchard MRT station. Take Exit A. Take the underpass towards Marriott hotel. Take the escalator up onto Scotts Road. Turn right and walk down Scotts Road. Walk to destination. Journey time about 8 minutes. [Map]
Posted by DerrickTan at 11:01 PM