The Ascot @ The Grandstand 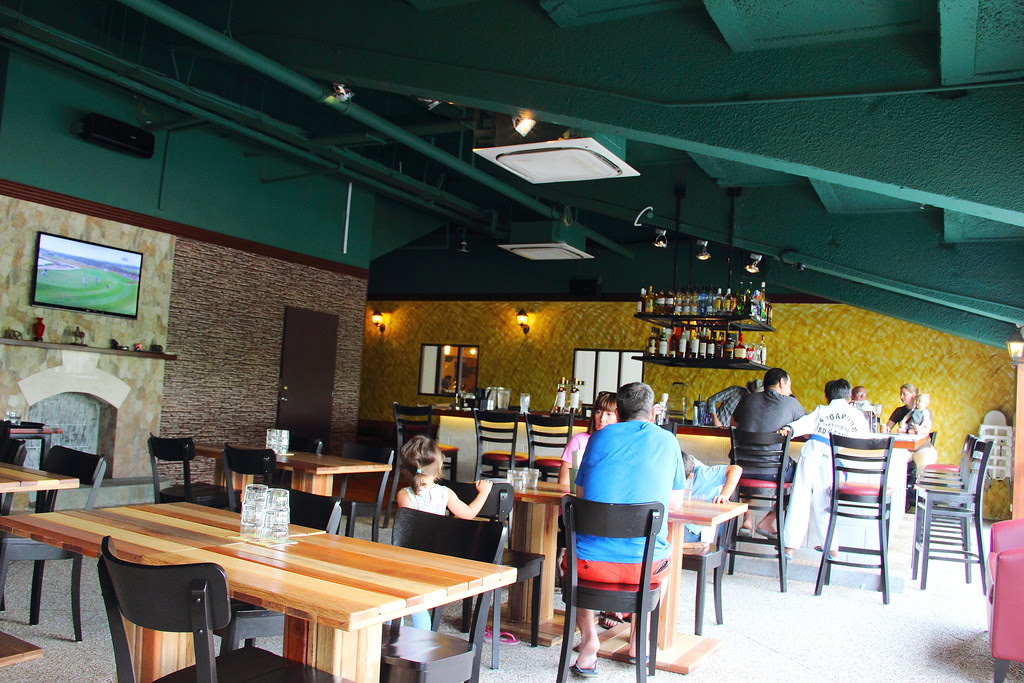 Will the former Turf City becomes the next Dempsey with more food and beverage establishments setting up at the newly revamped Turf City rebranded as The Grandstand? It waits to be seen whether The Grandstand will be next food paradise when diners will flock to. 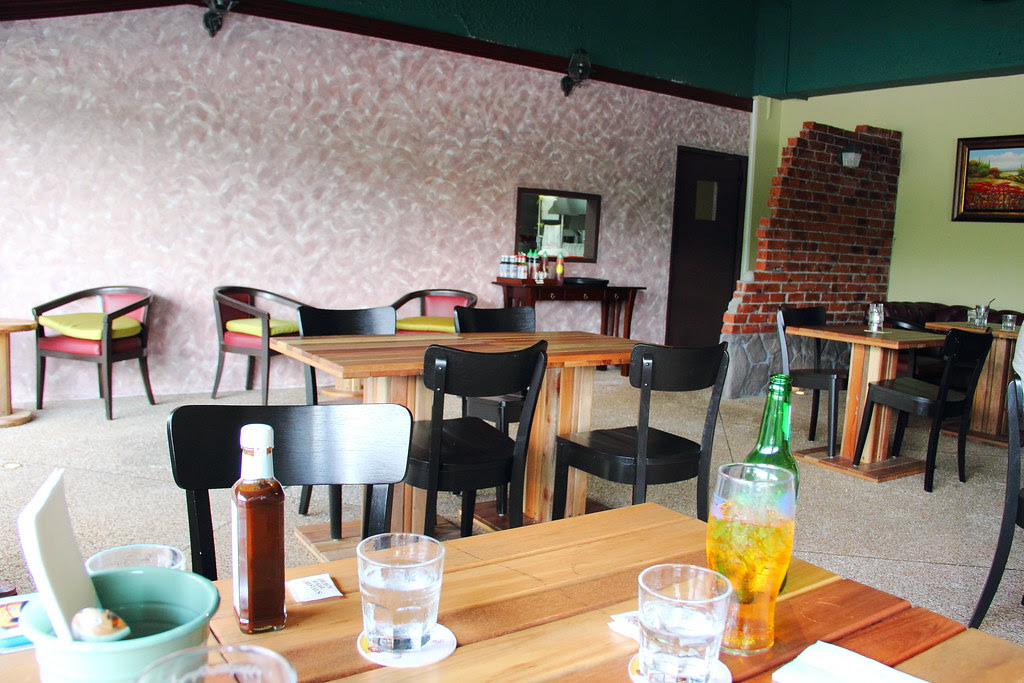 The Ascot is the latest establishment to open at The Grandstand in mid February 2013. The owner, Sylvester who spent time studying in the UK wanted to recreate in Singapore the very best of the quintessential English pub experience offering the very best of authentic English comfort food with a spectacular host of alcoholic beverages. 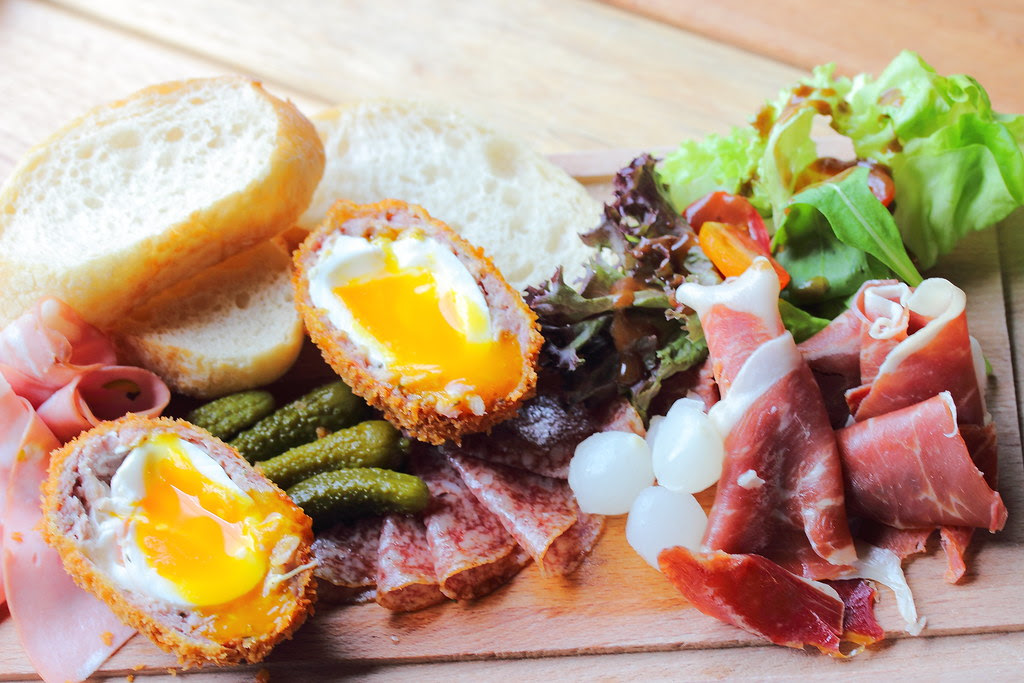 The Cold Cut Platter ($18) comes with 3 types of cold cuts served with silver onions, gherkins, scotch eggs and homemade bread. Scotch Eggs are a first for me. I didn't know eggs can be wrapped in sausage meat, coated in breadcrumbs and deep fried. Love that the yolk was still runny and it came with different textures of enjoyment. 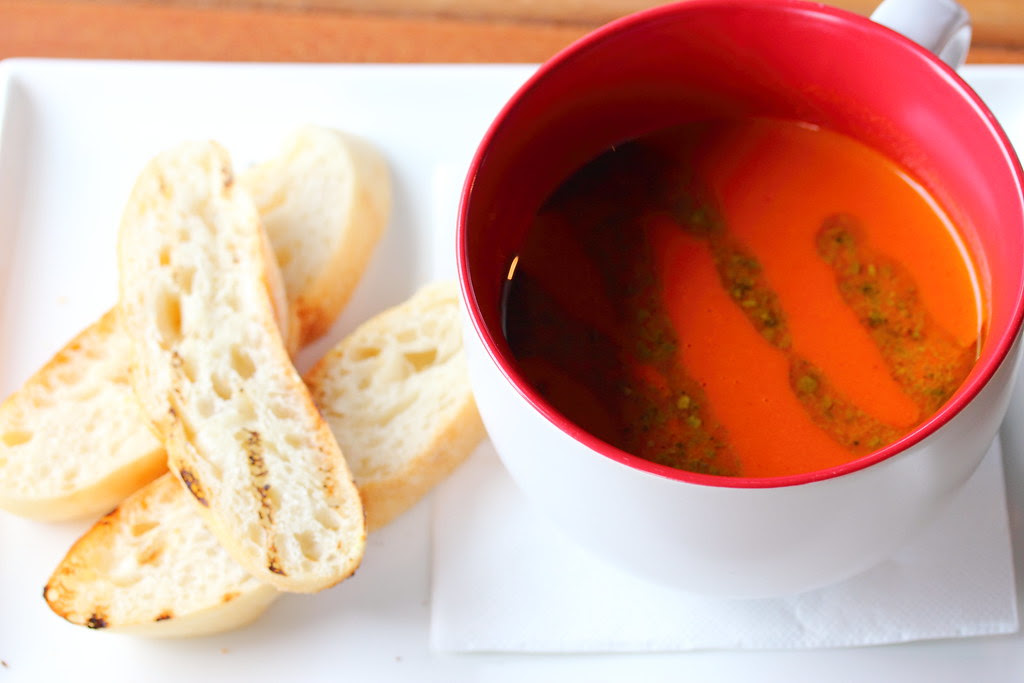 This is probably one of the best tomato soup I ever had. The Smoked Tomato Soup ($8) drizzled with peso was velvety, hearty and comforting. 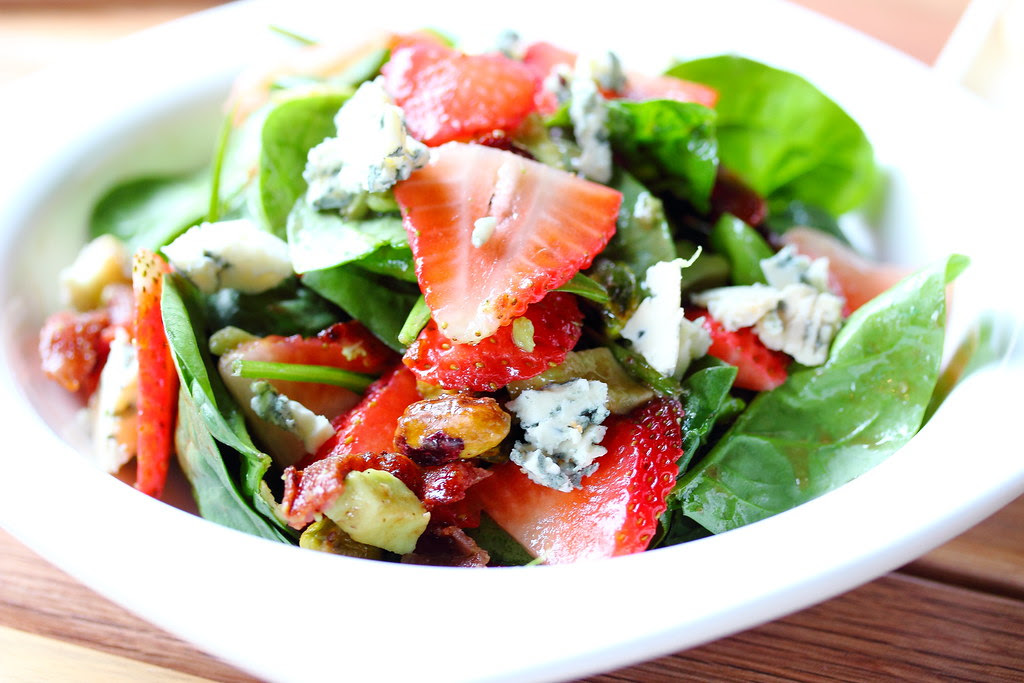 The Strawberry Spinach Salad ($18) sounds a bit bizarre with the medley of crumbled blue cheese, pistachios, bacon and avocado drizzled with raspberry vinaigrette was surprisingly very good and well balanced. Many people do not like the acquire taste of blue cheese but the one used at The Ascot is rather mild and it is quite easy for the local palate. 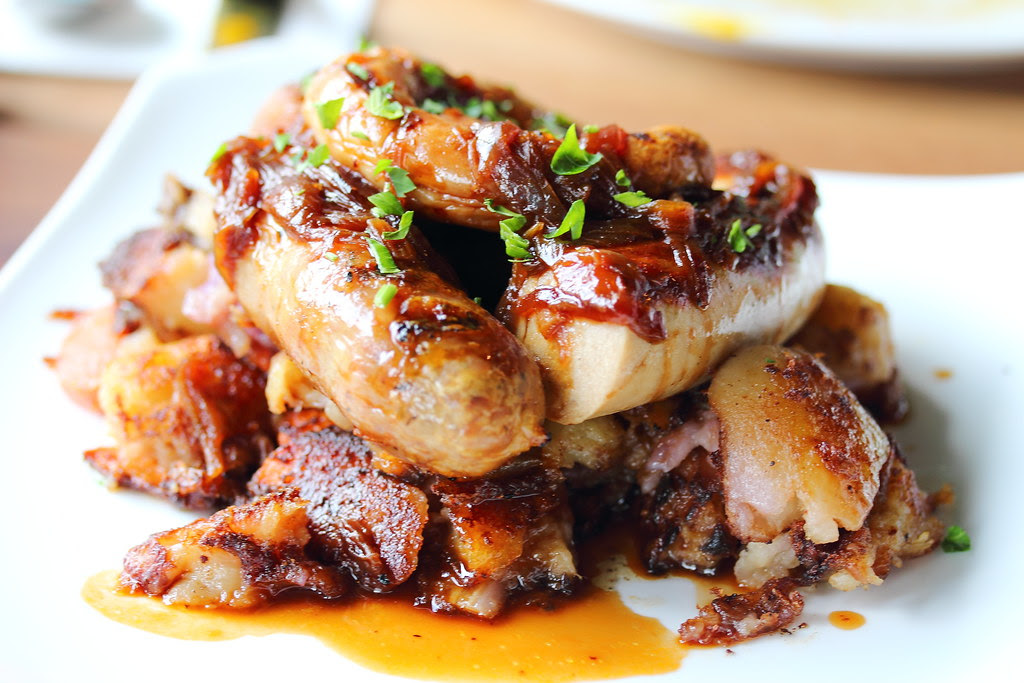 A Bunch of Bangers ($20) comes with 3 Broiled Sausages (veal, kurobuta pork, pork & garlic) and served on traditional English dish made with shallow fried leftover vegetables known as Bubble and Squeak. It got its name because of the bubbling and squeaking sounds during cooking. 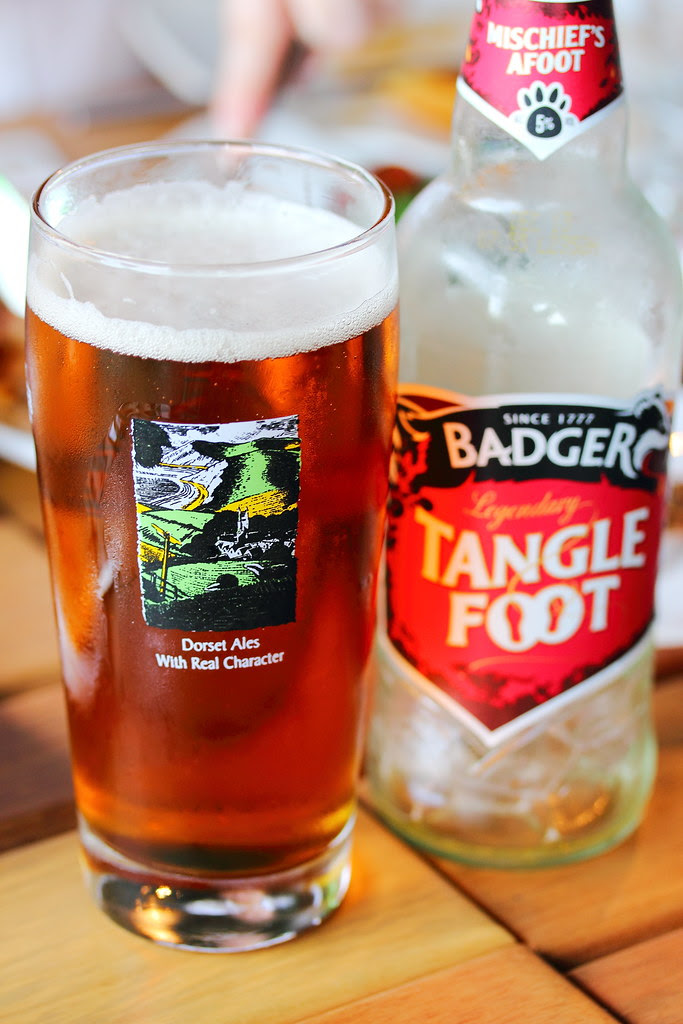 The best beverage to compliment the sausages is none other than having an ice cold beer. The Ascot's selection of alcoholic beverages includes Fullers London Pride, Pure Blond and Crown Lager, house pour spirits such as Cruzan Light Rum, as well as a diverse range of beers imported from England, Australia and other parts of Europe. The Ascot's variety of beers also changes every week. I had a Badgers Tangle Foot from UK ($15) which is a in between beer that is light and not too bitter. 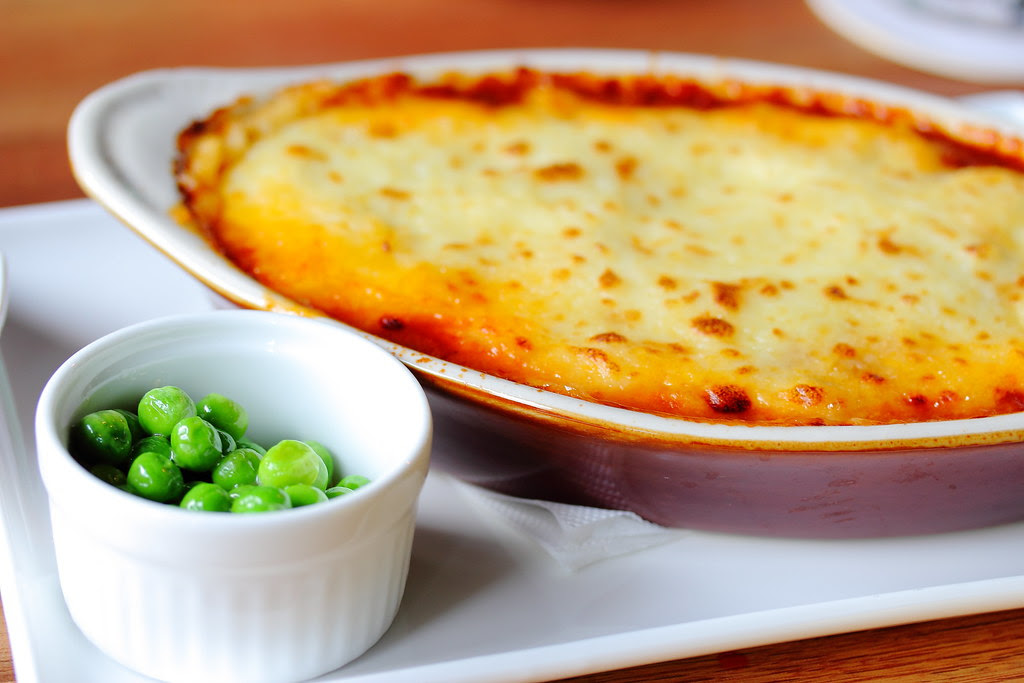 The Cottage Pie ($22) is an all time English favourite served with buttered peas at the side. A simple and homely meal with minced beef topped with mash potatoes. Can't help going back for more serving of it. 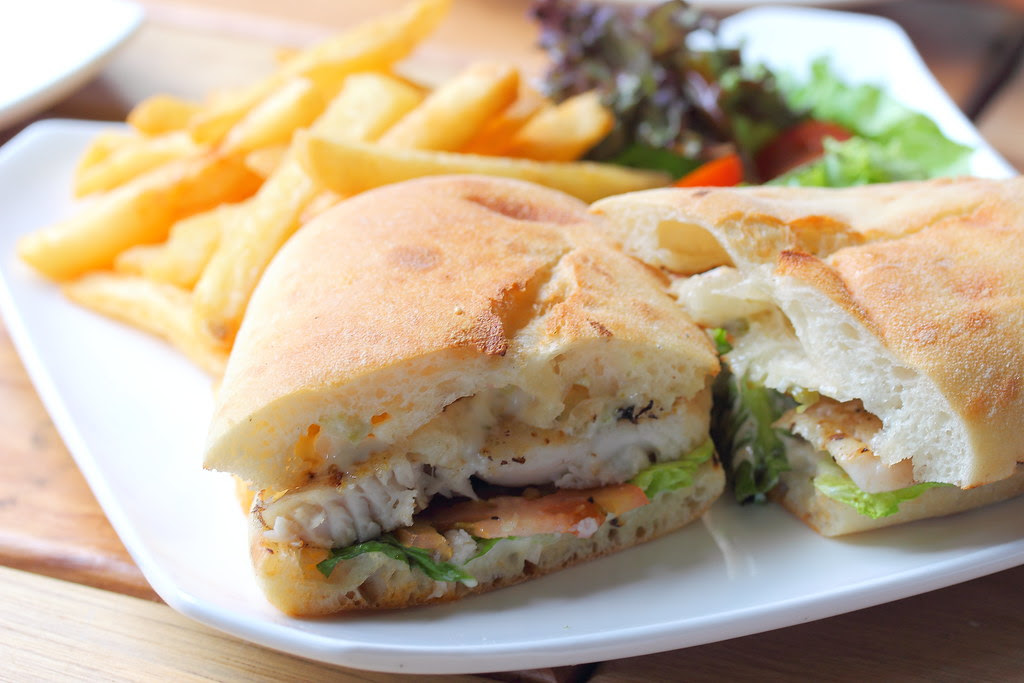 I was not having high expectation of the Pan Fried Fish Sandwich ($16) served with salad and fries as it looked rather ordinary. I was proven wrong when I sunk my teeth into the soft Turkish bread sandwiched with beautifully cooked fish that was fresh and moist. The fries also had a nice outer crisp as it was doubled fried. A technique that the fries are first deep fried to par cooked, drained of excess oil and deep fried again until golden brown. 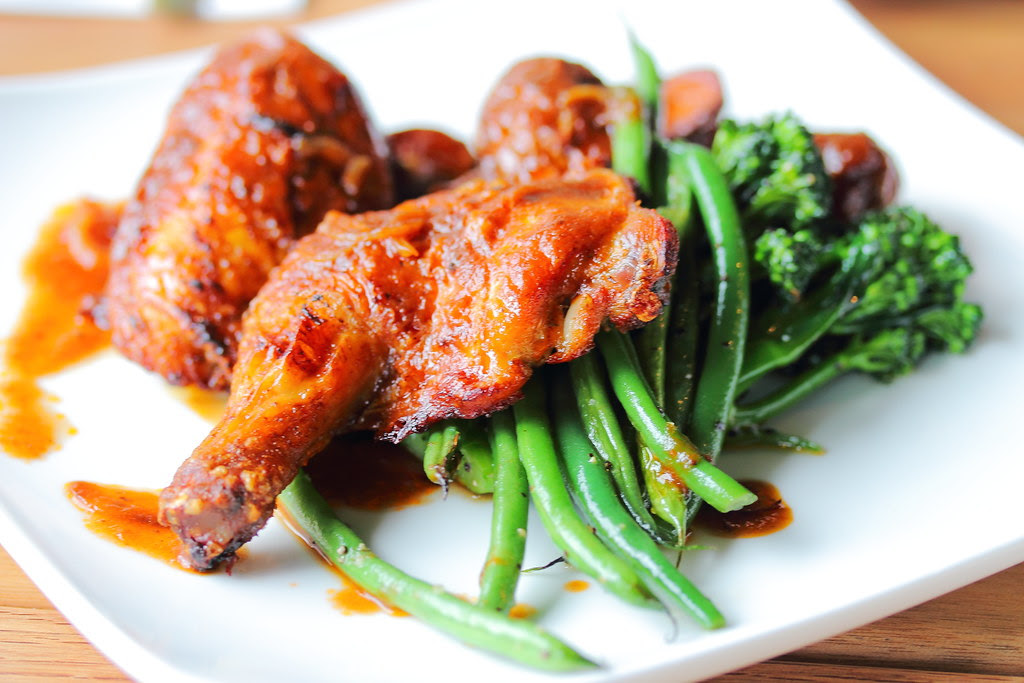 The Roasted Chicken ($24) served with vegetables and potato Lyonnais was finger licking good. The moist and tender chicken was well marinated and very tasty. I would love to go back for this dish again. 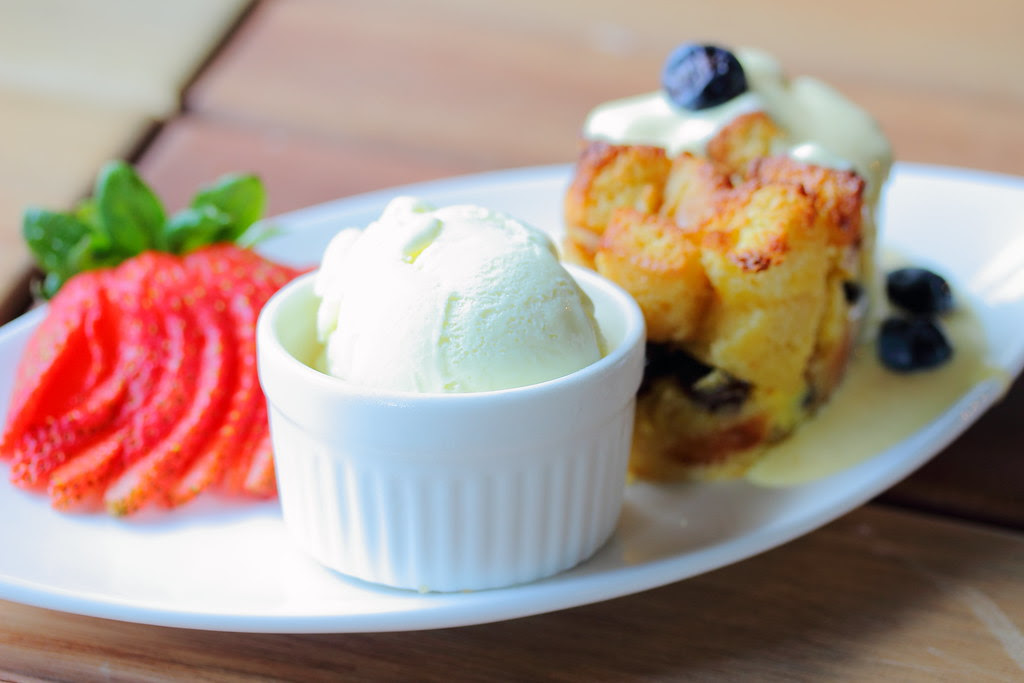 A slight twist from the tradition, the Classic Bread & Butter Pudding ($9) at The Ascot uses Brioche instead of the usual stale white bread giving it a rich and tender crumb. 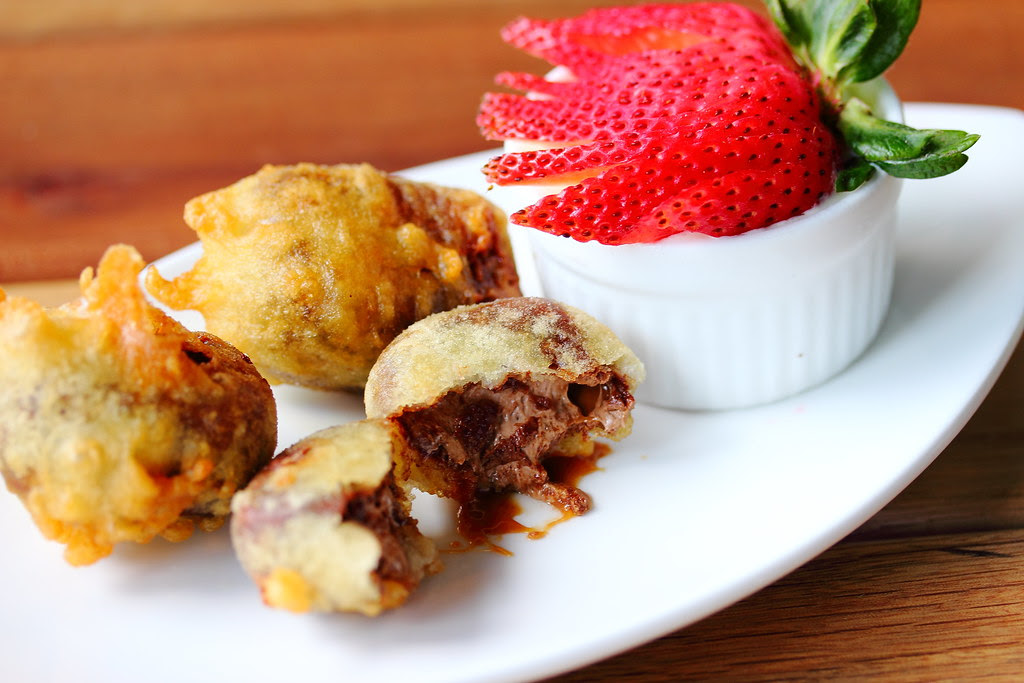 I have never heard of Deep Fried Mars Bars ($8) until today. Since I don't have a sweet tooth, I was afraid that the deep fried mars bars will be too sweet for my liking. It turned out that it was acceptable for my palate. It was not too sweet and had a nice thin batter coating which helps to tone down the sweetness as well as giving the dessert an extra texture.

Hidden right at the corner of The Grandstand and probably the only few places that serves authentic English food. The Ascot is also a great place to chill out away from the hustle and bustle of the city. On weekends, Brunch is available at The Ascot and it also has a Sunday Roast which is a popular family tradition originating from the North of England.