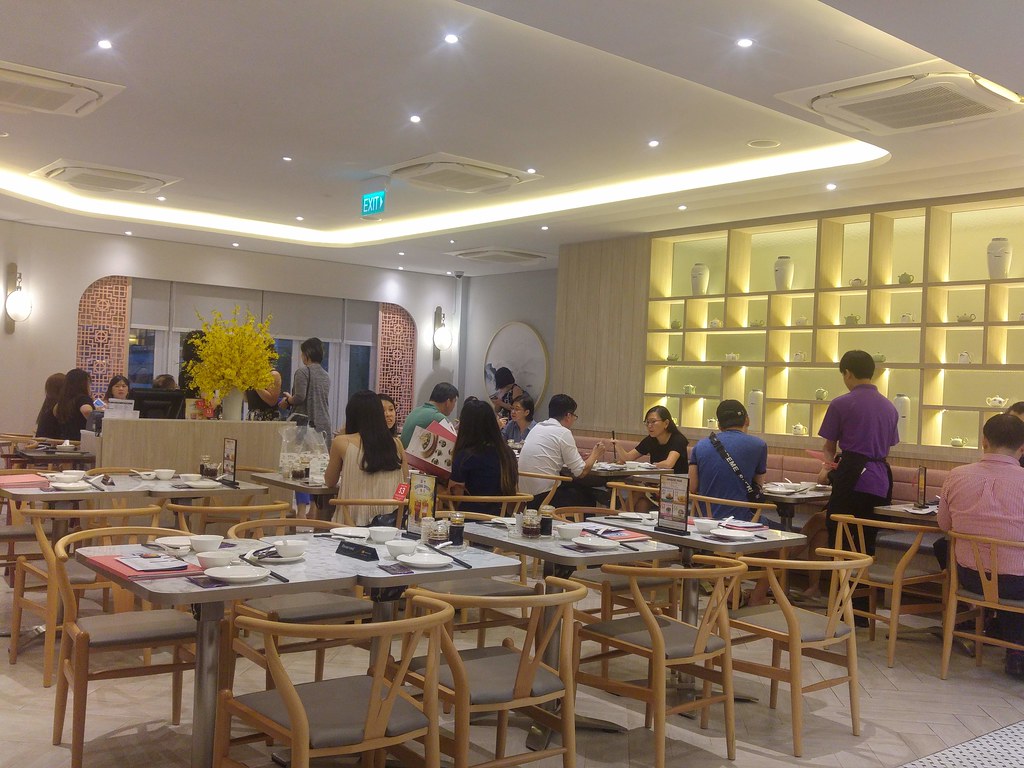 After a two-month long renovation, Crystal Jade Kitchen at Holland Village unveils a new contemporary look, together with a revamped menu crafted by newly minted Group Executive Chef Martin Foo. Alongside old times favourites, look out for creations that are modish but classic at the same time. 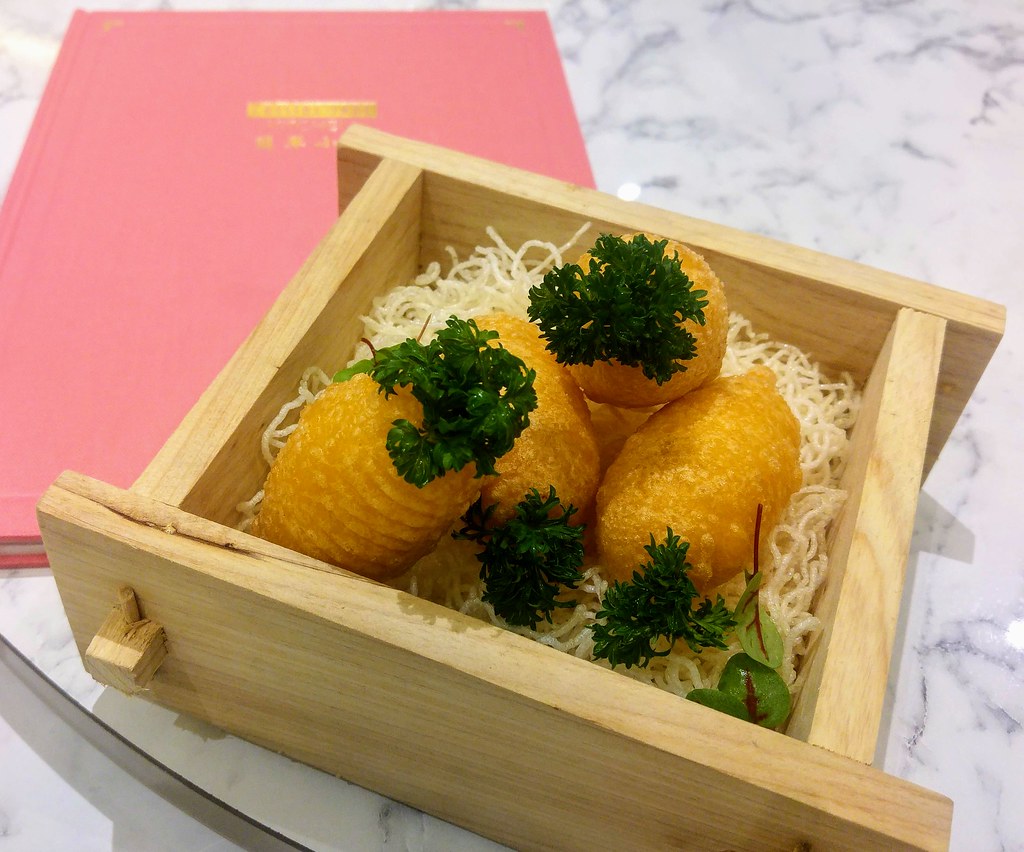 Deep-fried Chicken & Dried Shrimp Carrot Dumpling ($5.30/3pcs) is a modern take of the traditional deep-fried yam puff with minced meat. Though its filling was slightly too heavily seasoned, I like its mochi-like skin which was crisp on the outside and chewy in the middle. Similar mochi-like exterior can be found in their Deep-fried Sesame Ball with Lava Salted Egg Yolk ($6.80/3pcs), enveloping a molten salted egg yolk filling. Savoury and sweet, this works well as an appetizer or a dessert. 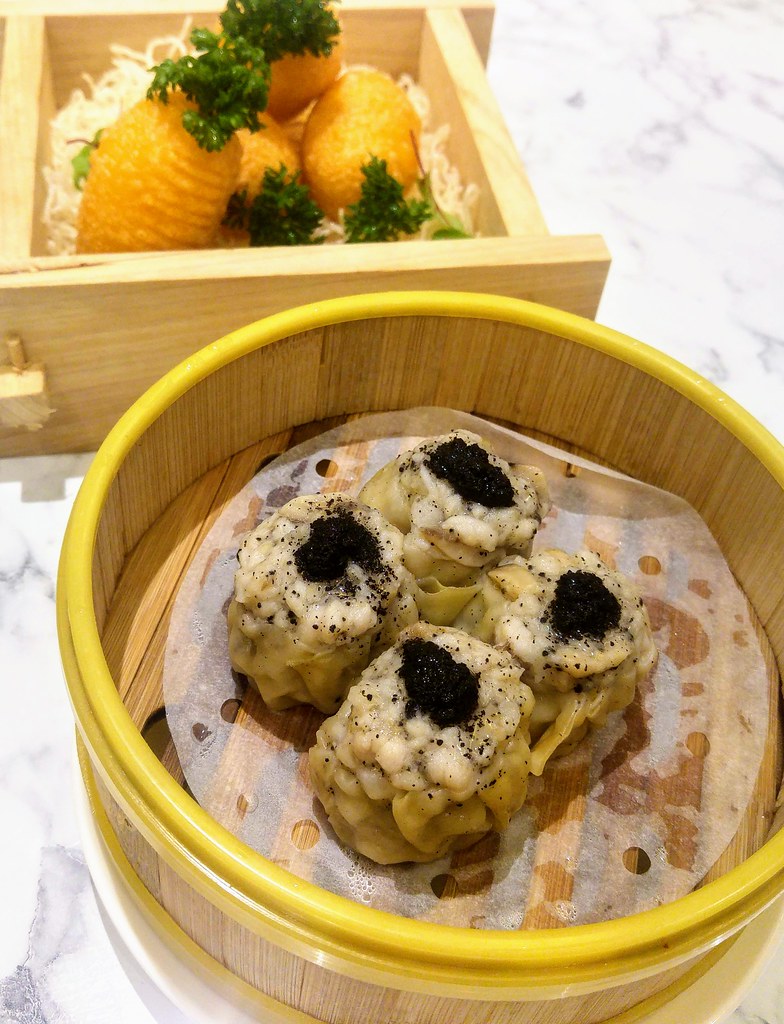 Steamed Siew Mai with Truffle ($7.50/4pcs) is not a new combination but this is one of the more convincing versions that I have come across with the use of shiitake mushrooms along with truffle pate and truffle oil. 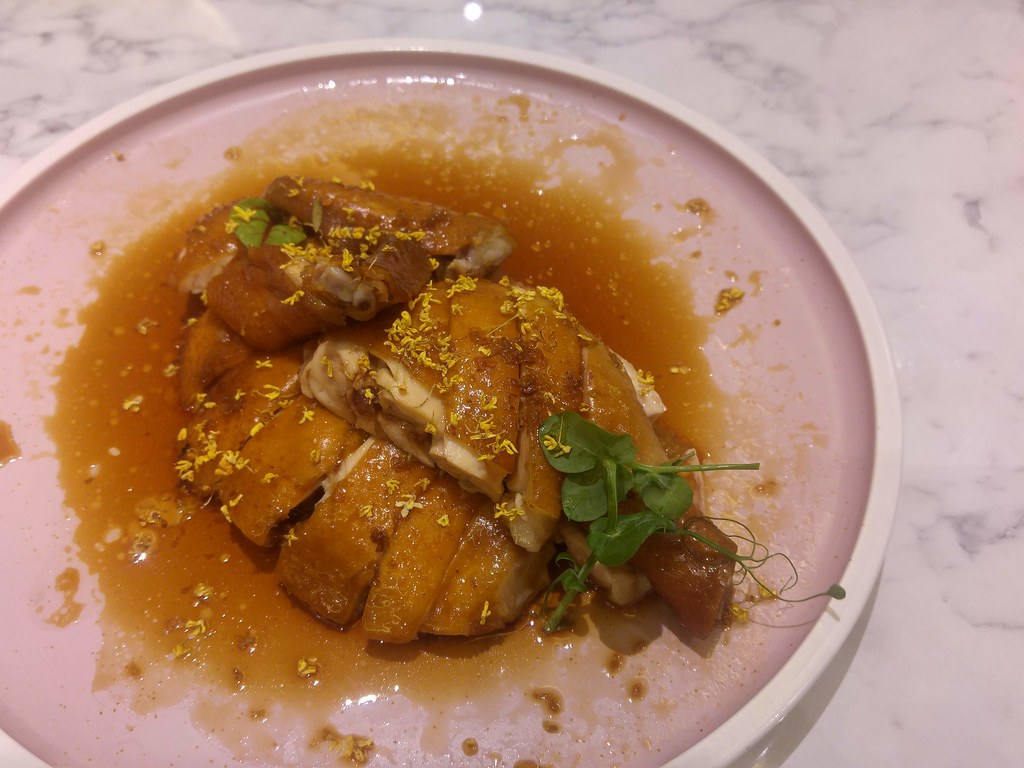 One of the new dishes that garners much attention was this Soya Sauce Chicken with Osmanthus ($14.80/regular, $20.80/half, $35/whole). Steeped in a special marinade and basted with osmanthus-infused syrup, the occasional whiffs of osmanthus aroma effusing from the chicken seemed to have the ability to lift its flavour, though it remained pretty elusive in terms of its actual taste. 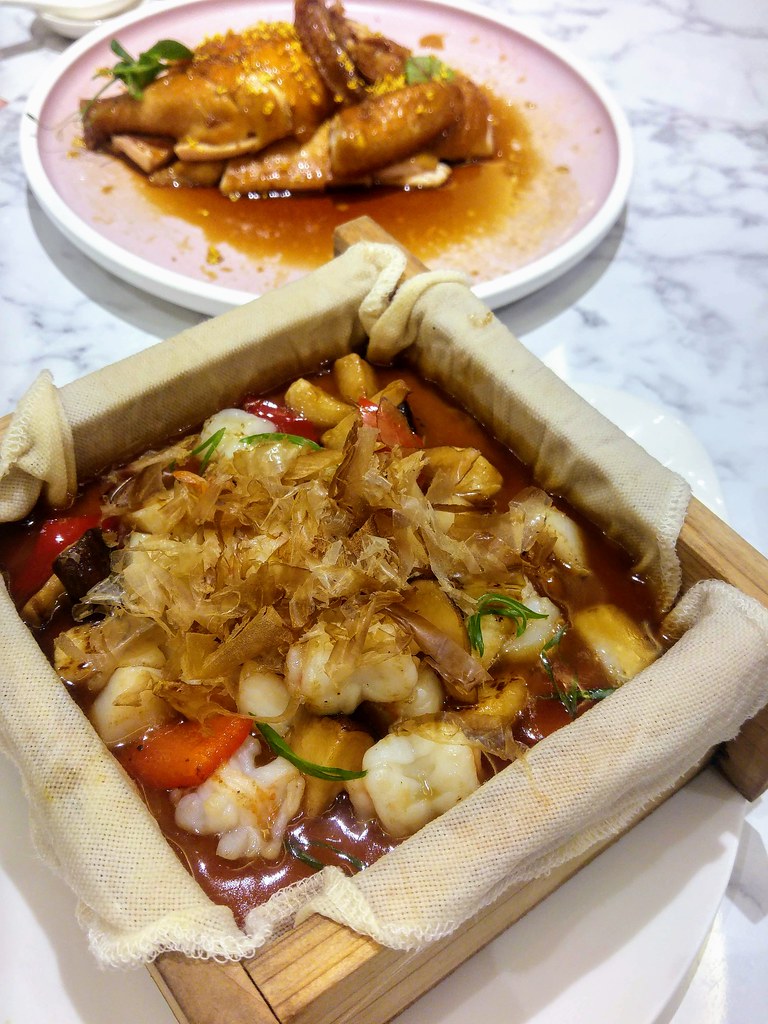 I was quite excited by the sight of the wobblying Steamed Homemade Tofu topped with assorted seafood ($18.80). The tofu is homemade with organic soy milk and eggs. I appreciate Chef's attention to details, such as serving it in a traditional tofu press and mould, with a piece of tofu skin underneath to prevent the sauce from seeping through. The assorted seafood topping were stir-fried beforehand, imparting a layer of wok hei onto the tofu, which may otherwise be quite one dimensional in flavor. 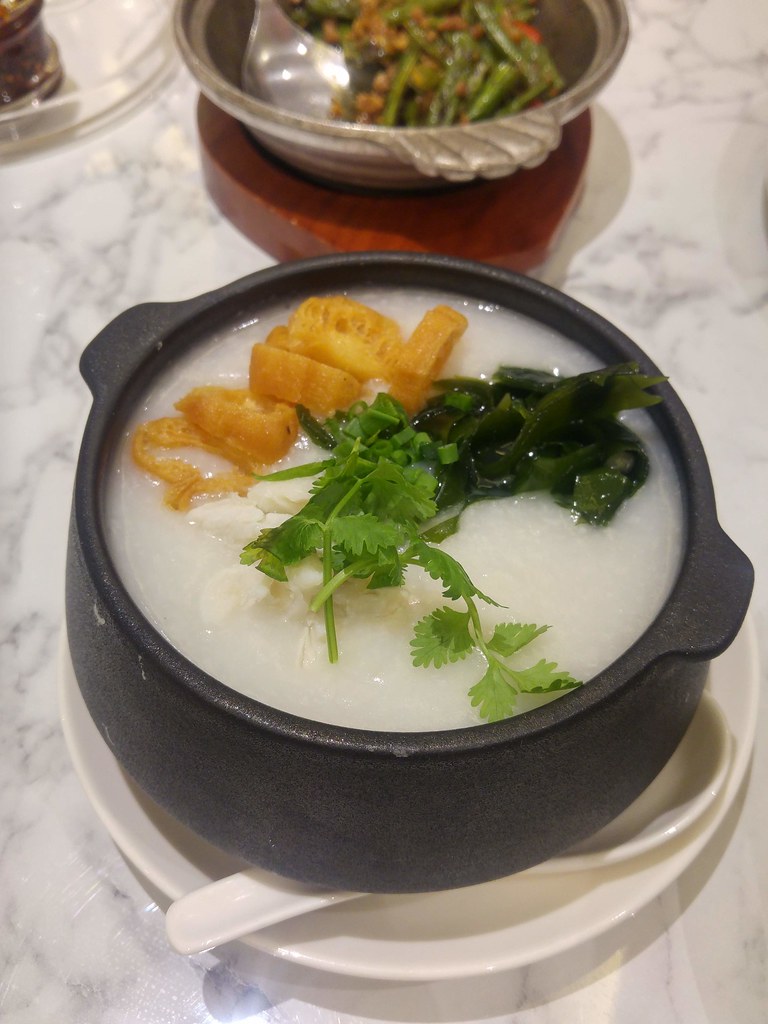 Crystal Jade has always been known for their velvety congee and the Premium Seafood Congee with Japanese Seaweed ($13.80) is the latest addition to its current range. Interesting choice of using Japanese kelp alongside with scallop, crab and prawn but nothing really quite stood out. 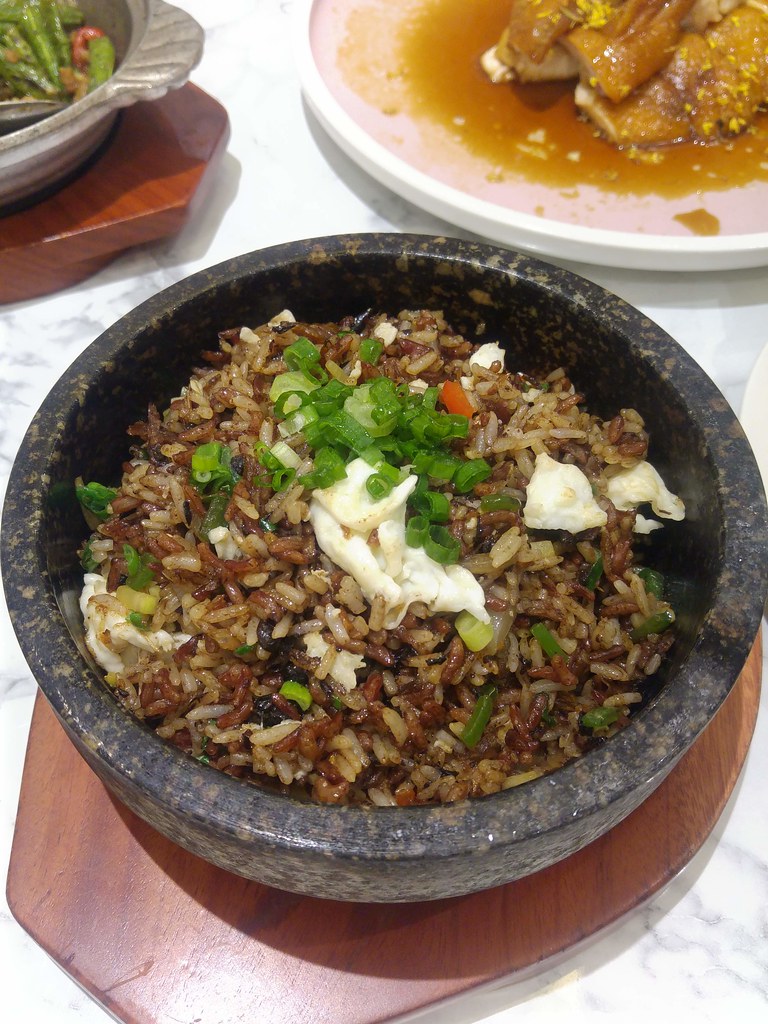 What stood out for me is the Fried Brown Rice with Black Bean Dace Fish & Egg White ($15.80). The unpolished red rice were grainy and neatly separated, flavoured with traditional black bean dace fish. It was a good idea to leave out the egg yolk which might mess up its flavor, while using only the fluffy egg white to balance up the texture of the drier ingredients. 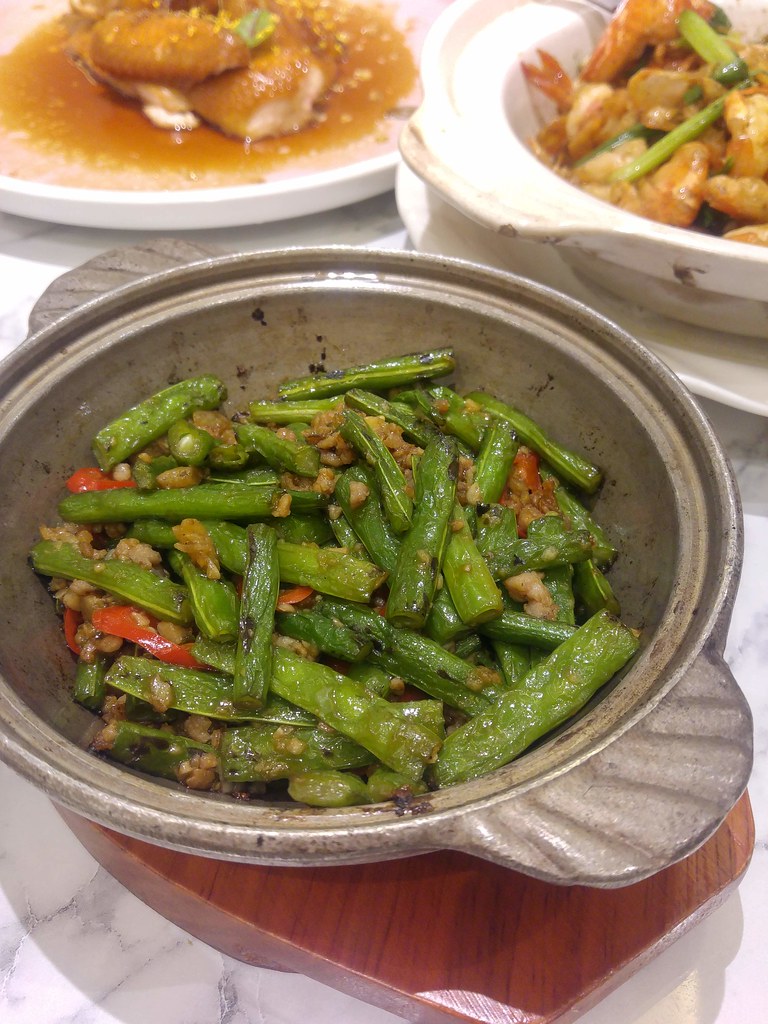 What looked simple but big on delivery is the Sauteed French Bean with Tai O Shrimp Paste and Minced Pork ($13.80). The Tai O shrimp paste glazed over the charred French beans, drawing out their sweetness effortlessly. 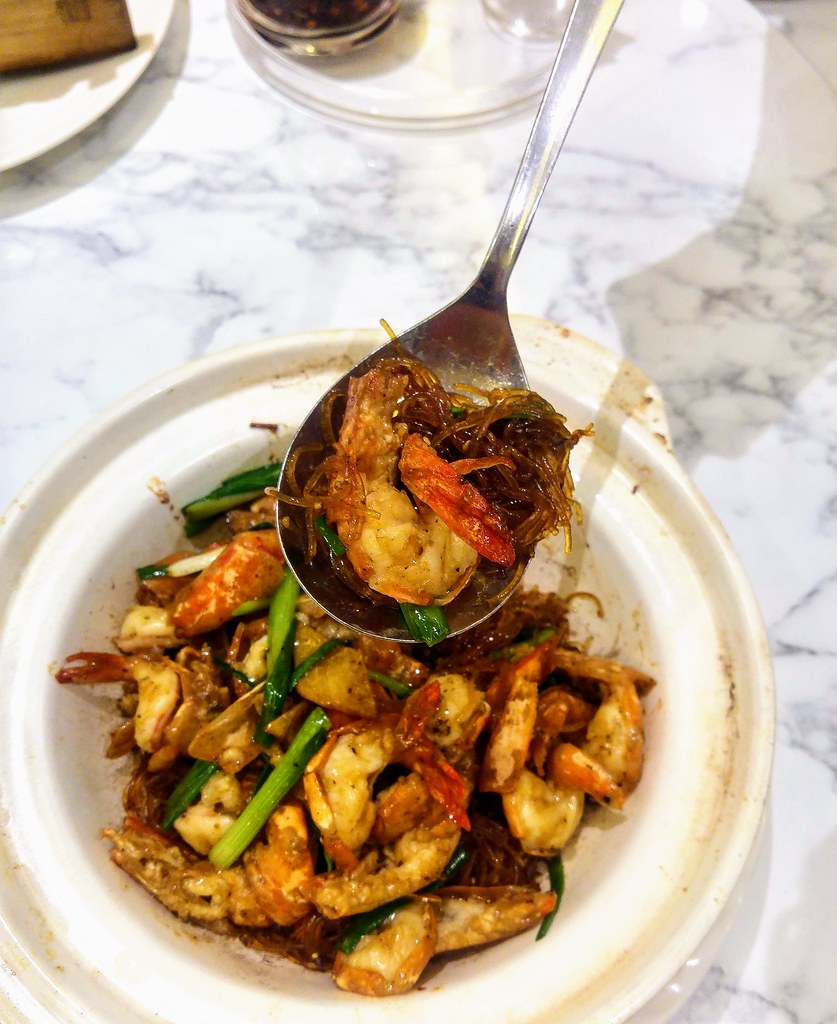 In the same vein we had Sauteed Live Prawn with Vermicelli, white peppercorn, ginger and scallion in Claypot ($24.80). I'm not sure if this is a good way to treat live prawns as the combination of the sauce and the rather sharp ingredients seemed to have dominated the dish. But I like the vermicelli, which got quite addictive, like burnt claypot rice. 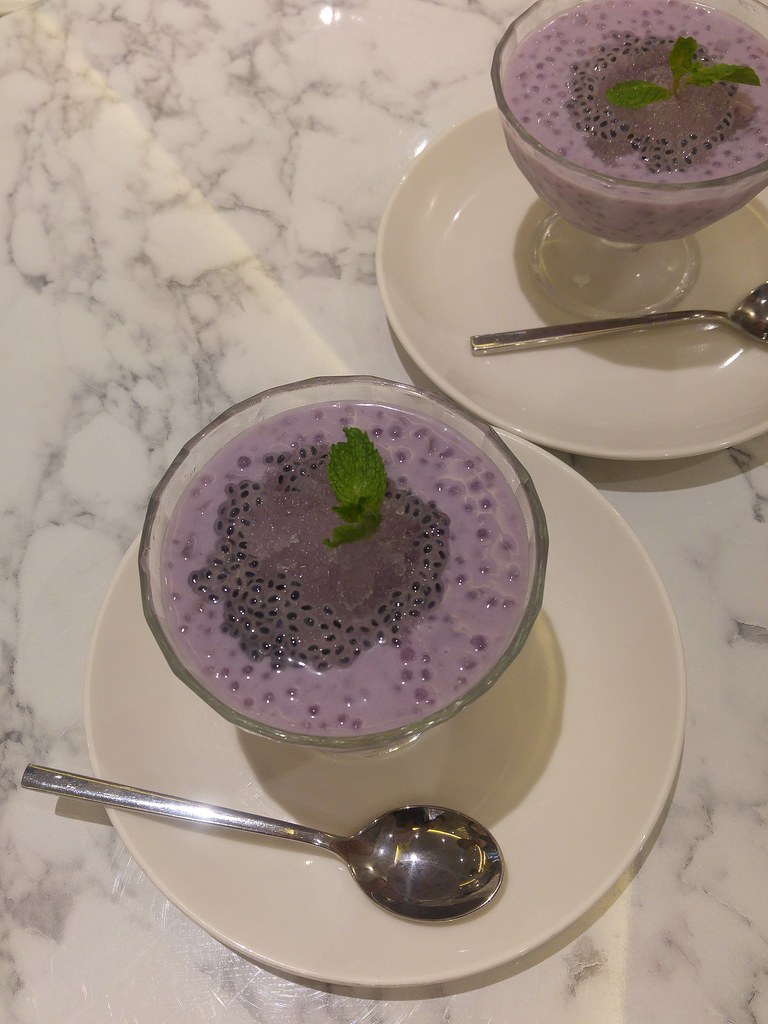 For dessert, we tried a healthier version of Orh Nee - Purple Sweet Potato & Taro with coconut milk, gum tragacanth & sago ($5.80). It had that nice yam fragrance and the sweetness of sweet potato, enhanced by coconut milk. Although it was not fully made of yam paste, the sago plumped with coconut milk was just as satisfying. The gum tragacanth also gave an interesting bite to this dessert. The above are only a portion of their new dishes, so do visit the outlet to find out more about their new menu.