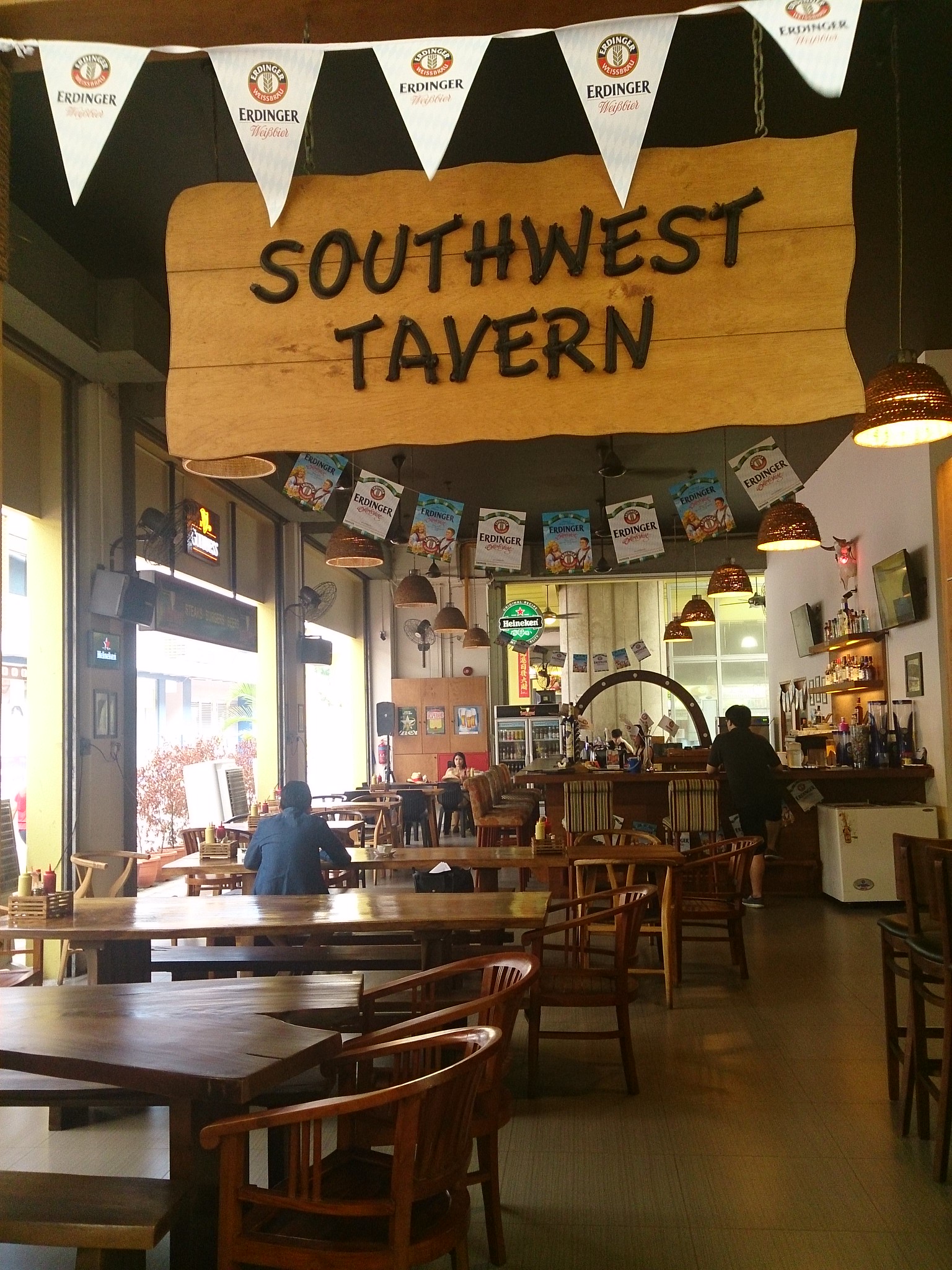 Southwest Tavern is a cowboy theme restaurant located at Tradehub21, around the Jurong East region. Being a Westerner myself, I was quite surprised when I first heard of it, as such places are usually concentrated in the Eastern side of Singapore. On their website, they claimed to be serving the best western food in Jurong. Well, we shall let the food speaks for itself.... 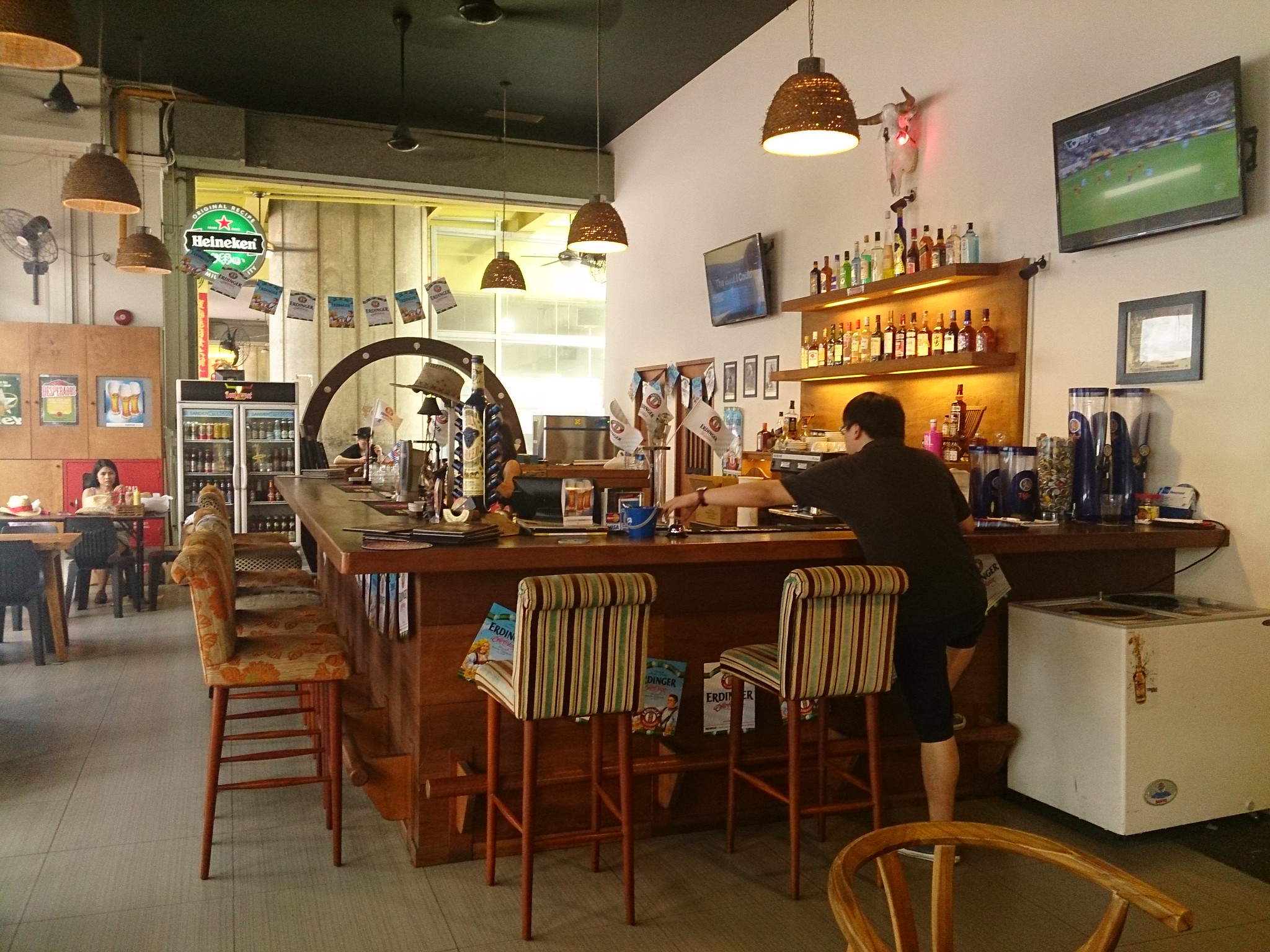 Dining here is fully alfresco. It is not exactly ideal for our climate, but being hidden in the lane helps in keeping it shady and cool. The interior is pretty simple, with wooden tables and benches, of what you may have expected for such a bistro. Their menu is surprisingly comprehensive, ranging from your typical bar food to soups, salads, steaks, ribs, seafood, chicken, pastas and pizza. "Suicide Wings" are available if you are up to it. Beer lovers will definitely love their extensive offering of imported beers too. 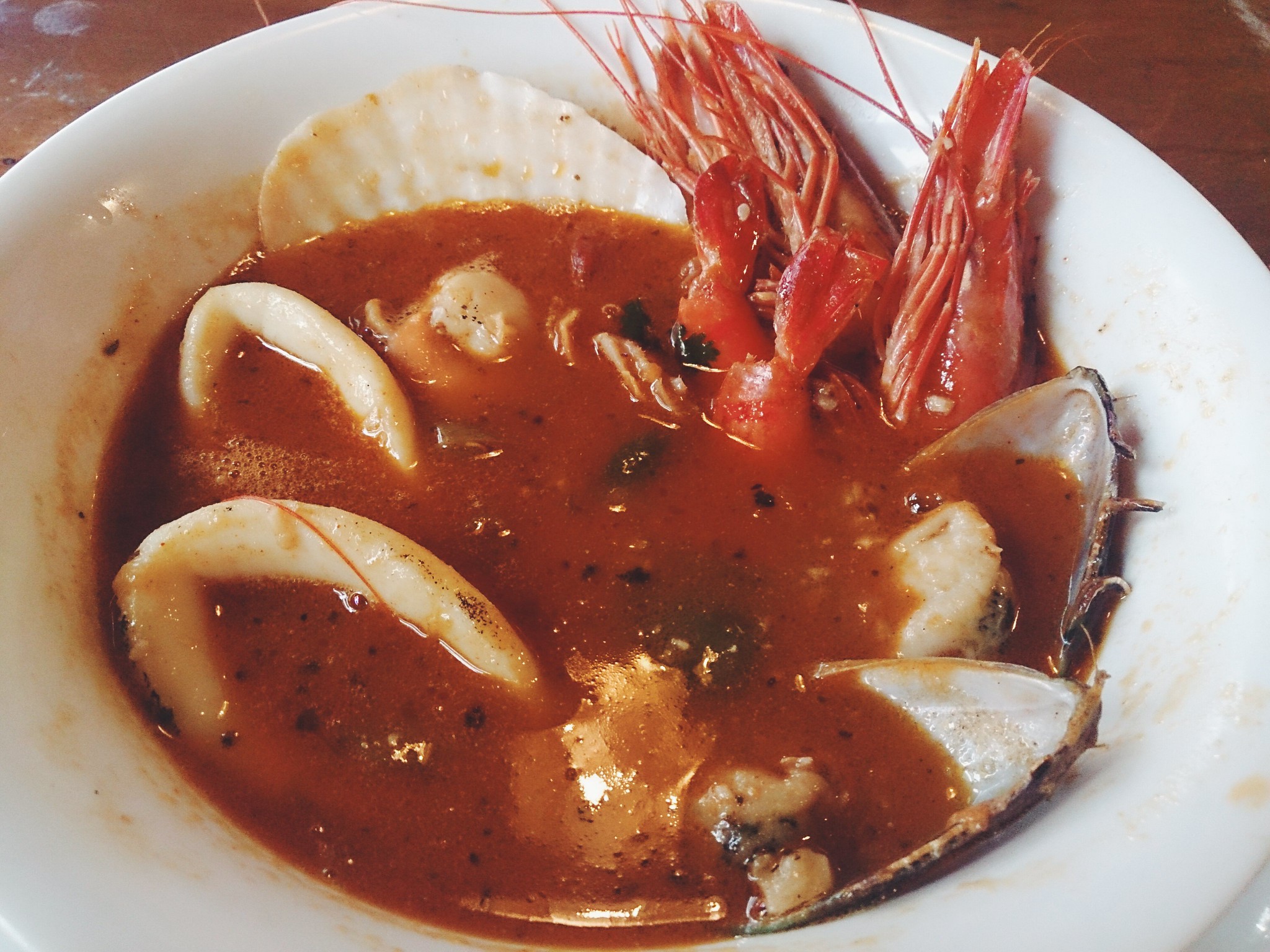 The Seafood Gumbo ($12++), I would say adheres closely to the Southern Louisiana's recipe. Containing rice, it is more like a stew with the soup strongly flavoured with prawns, mussels, scallops, squids, along with bell peppers. Each ingredient was fresh and succulent. The resulting taste was tangy and a little spicy which was quite appetising. 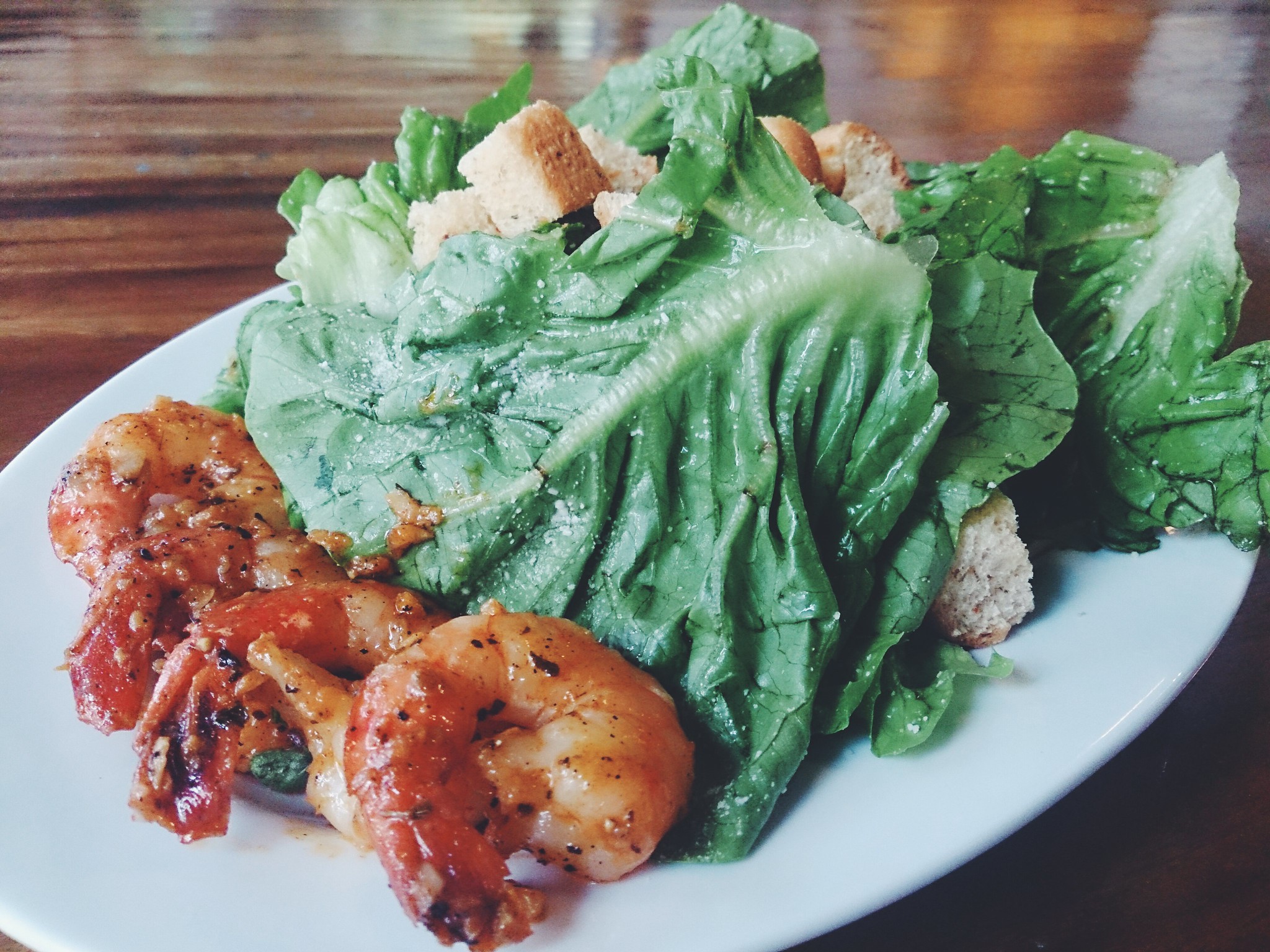 The Salad with Cajun Prawns ($10++) was nothing impressive with just a few pieces of greens. But I like the Cajun Prawns which was firm and nicely spiced. 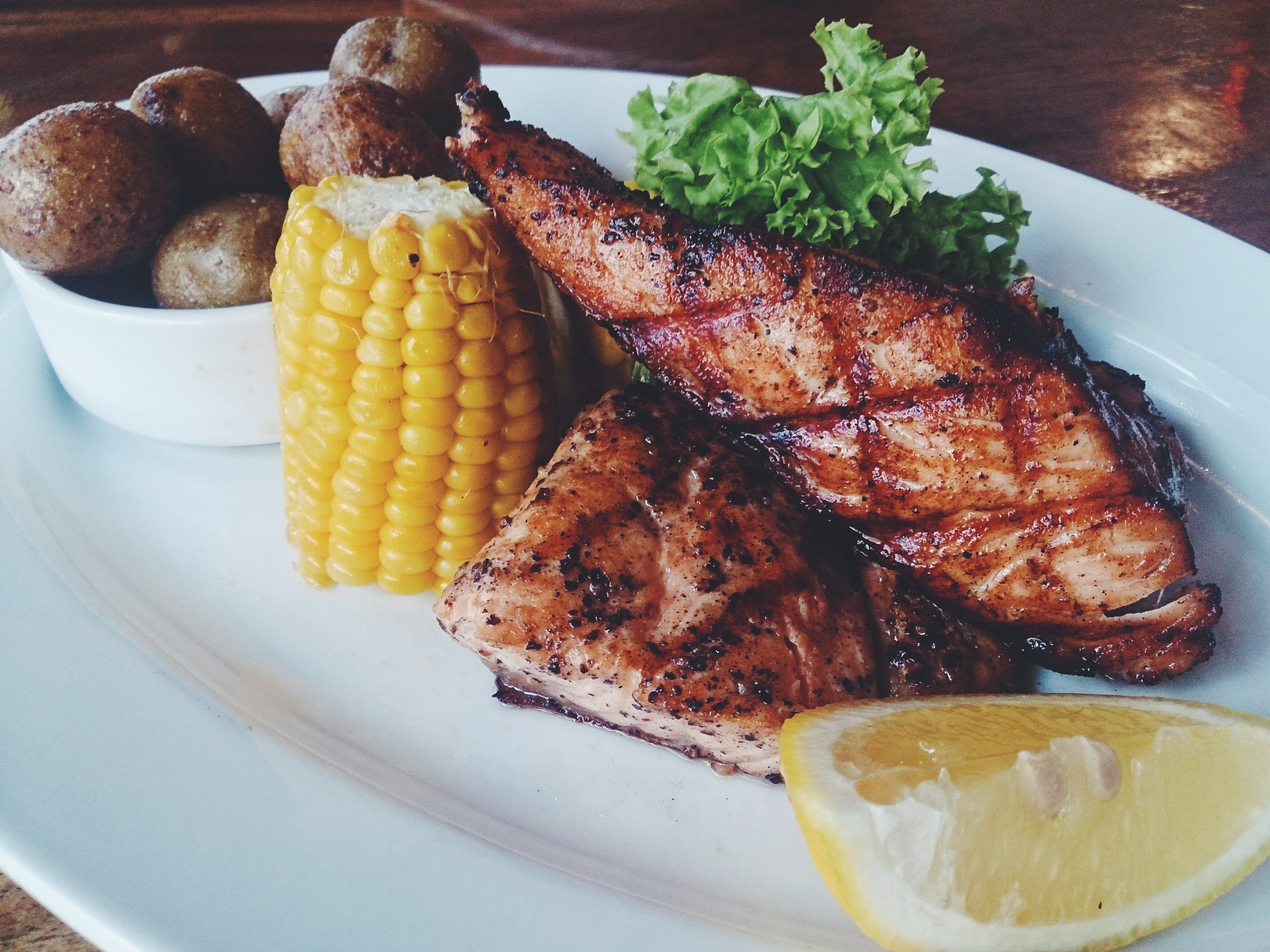 Usually a bistro bar set up like this may be good in their steaks and burgers but fails in their seafood items. However after trying their Grilled Fresh Norwegian Salmon ($22++), I'm quite assured by the quality of their food. The salmon was perfectly grilled. The surface was slightly charred, leaving the inside pinkish and moist. The meat carried a rich, fatty texture. When the meat was so fresh, all I needed was just a squeeze of the lemon given by the side, dispense any sauces or dressing. For me, it would have been perfect if they have gone easier on the salt. As for the sides, I felt they need to work on it. The sweet corn was scrawny and the small potatoes were under roasted. 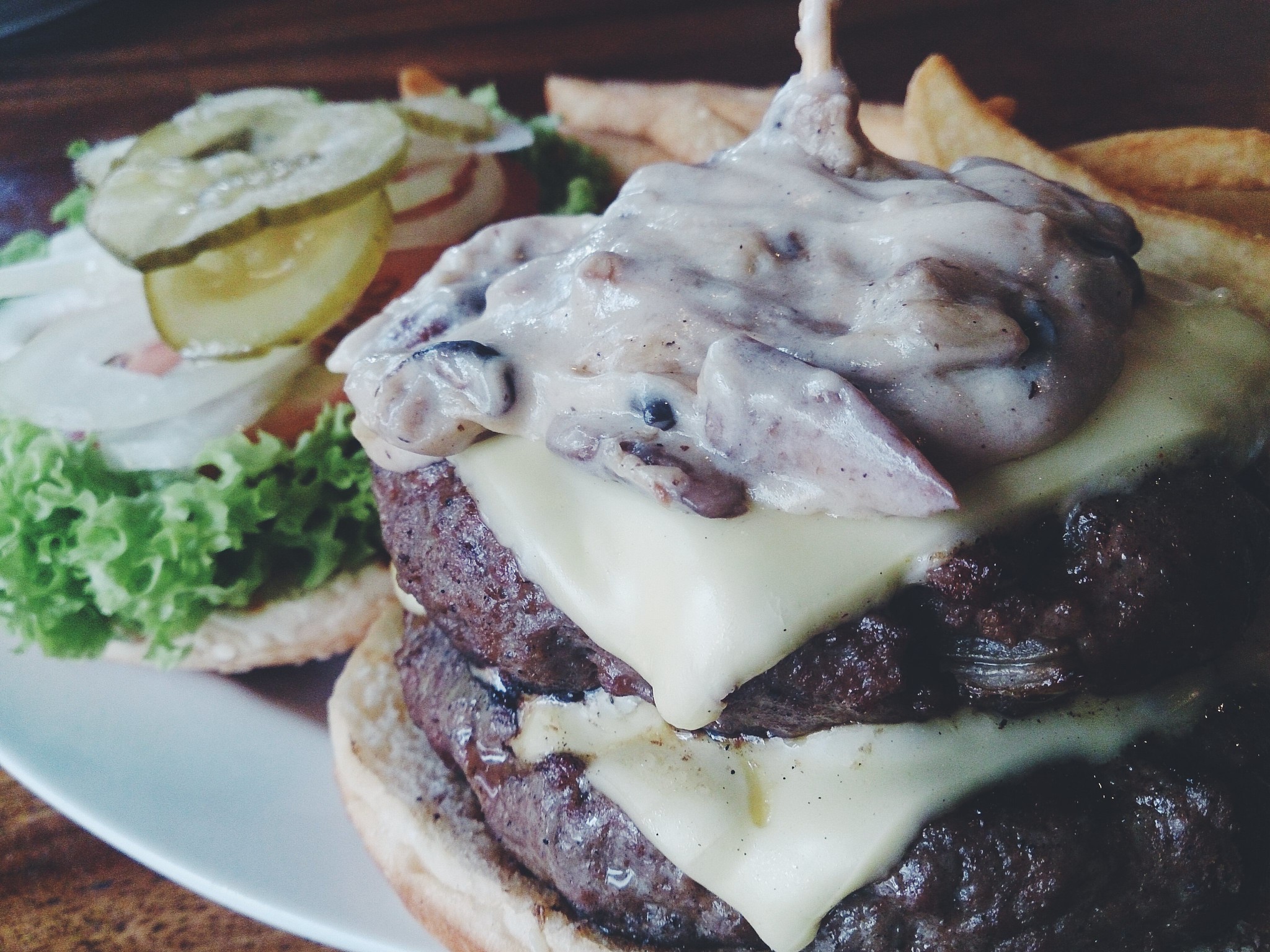 I didn't expect their Double Cheese Burger ($18++) 3.8 to come with double patties. I was thinking of just double slices of cheese. The patties are homemade with imported beef. Each patty was evenly charred on the outside with the inside a little rare and juicy. My other half shared that he learnt a burger consists of a well toasted bun with charred sides (ticked), juicy homemade patties (ticked), fresh vegetables and onions (ticked) and last but not least, how you dress up the burgers to differentiate it from the mundane ones. Yes, the sauces was left unticked for this burger. I thought the patty could be less peppery. But still, he enjoyed it pretty much. The additional topping of Mushroom Swiss ($3++) we had was thick with cheese. You may want to skip that if you are ordering a Double Cheese. 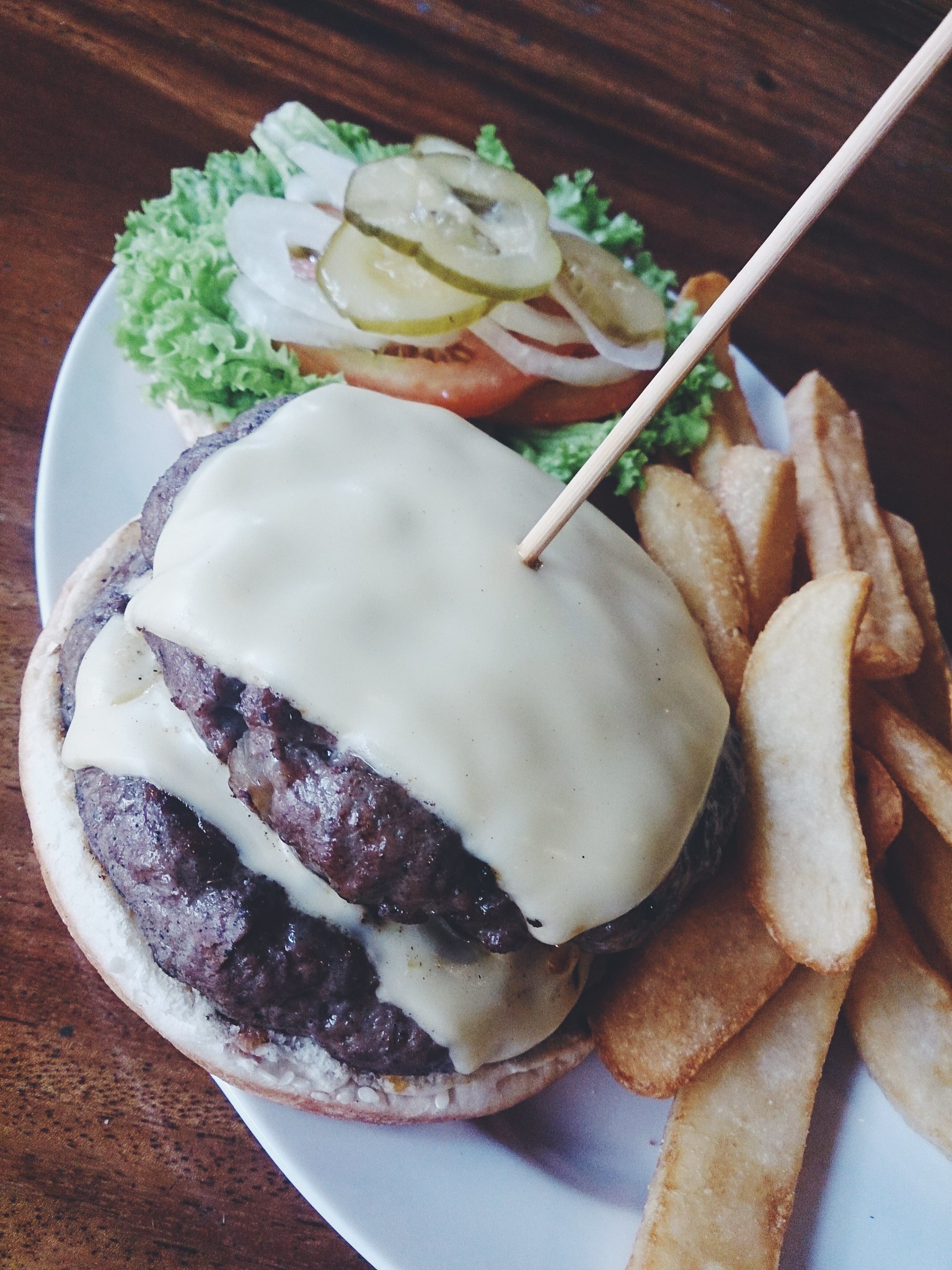 The quality of their food certainly surpassed my expectations and I wish I have a bigger stomach to try more of their offerings such as their famous Beer Butt Chicken and ribs. One may find the price slightly high for a basic setting like this but the quality and portion justify it. A hidden gem worth exploring especially for the Westerners.

Written and Photography by Si An. A lady who is allured by travelling, loves the feel of freedom, smell of the rain and the aroma of fine coffee and food.