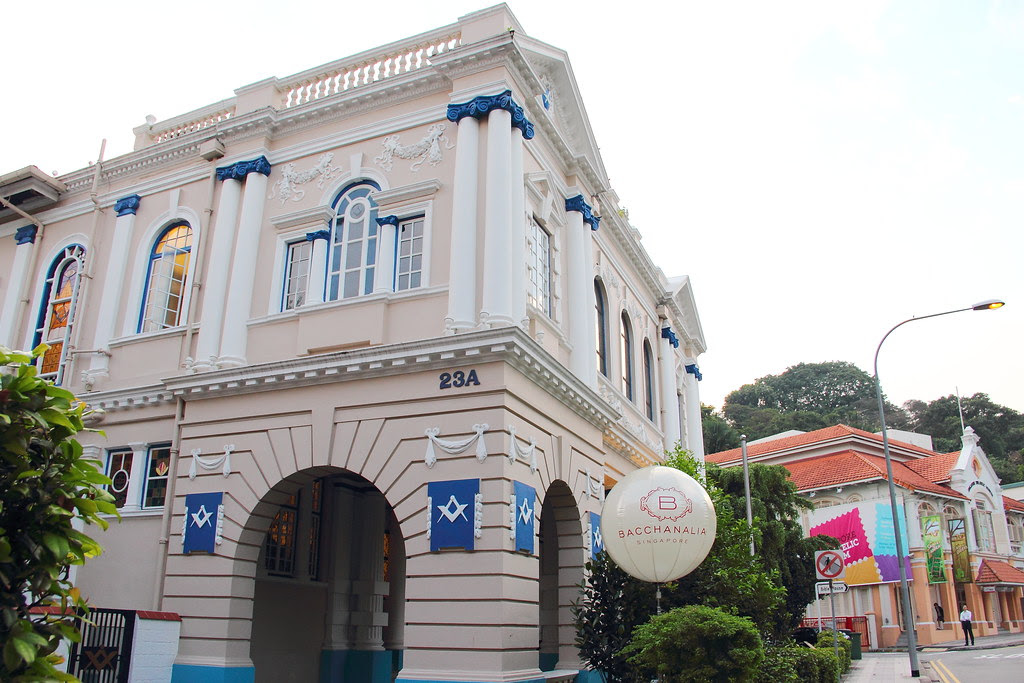 I may not have the chance to fly hundred of miles to Bray, Berkshire to eat at The Fat Duck, a 3 Michelin Star restaurant by Heston Blumenthal famed for his multi sensory cooking and scientific precision approach to food. I am not despair as the food and beverage scene in Singapore is ignited with the opening of Bacchanalia at Coleman Street helmed by Executive Chef Ivan Brehm who has spent 4 years working his way up to the development chef of Heston Blumental's Experimental Kitchen. 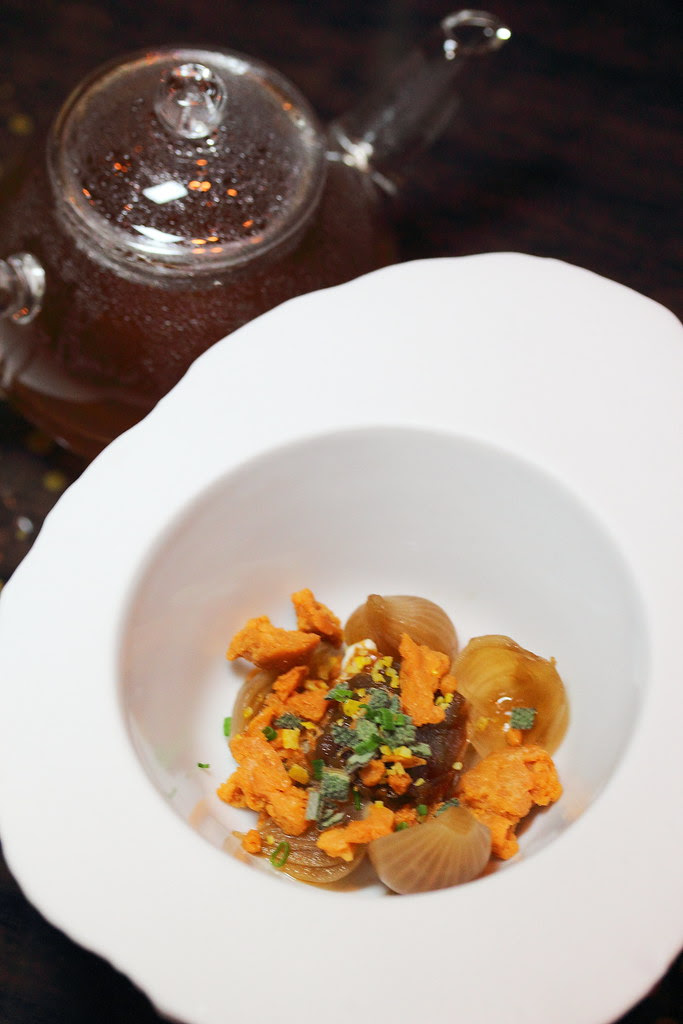 When the French Onion Soup ($20) was served separately in a a tea pot and a bowl, I knew I was into a great culinary experience. In the tea pot, the onions are caramelised at 80 degree Celsius for 3 days to develop its natural sweetness which formed the base of the broth that is poured into the bowl of caramlised white onions, crispy cheddar nuggets, homemade rye bread and ricotta cheese. The bowl of french onion soup was brought to a whole new level, delicate and exquisite. The bowl of french onion soup was not only flavourful but it was accompanied with texture enjoyment such as the cheddar nuggets. 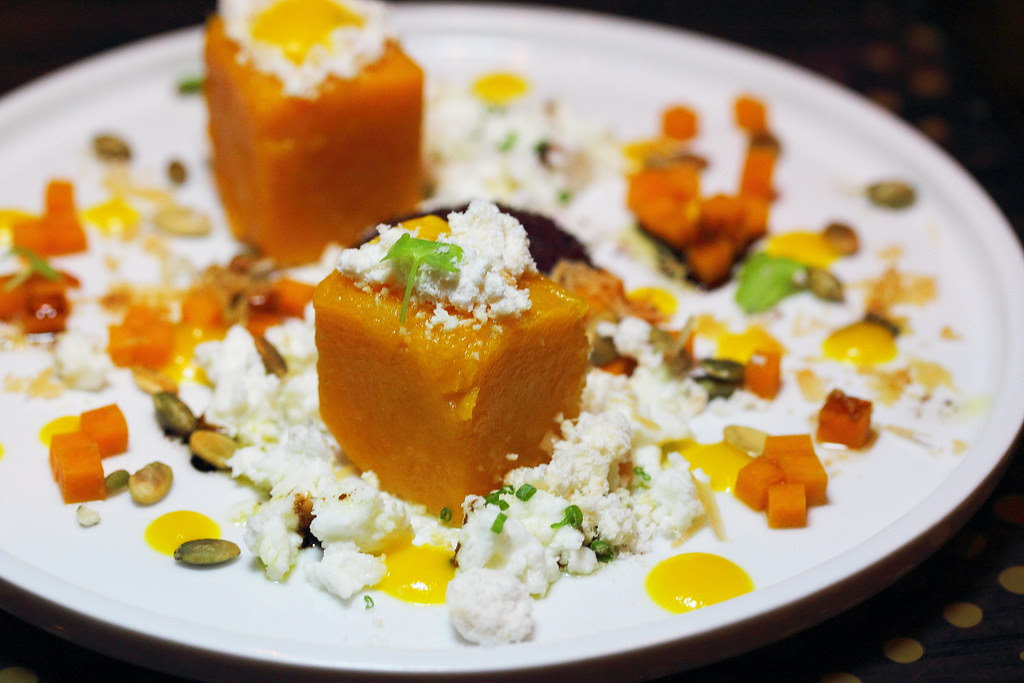 The colourful Amaretti Di Saronno ($19) is a spin of the classic Northern Italian flavour pairing of amaretti and pumpkin. The butternut squash confited in olive oil, sage and orange was served with goat feta, toasted pumpkin seeds, pickled butternut squash, pumpkin puree and araretti biscuit crumbs. An egg yolk cooked at 63 degree Celsius and coated in sumac sat in the middle of the dish, serving as the sauce by breaking the yolk. An interesting combination of different flavours working harmoniously that will whet one's appetite. 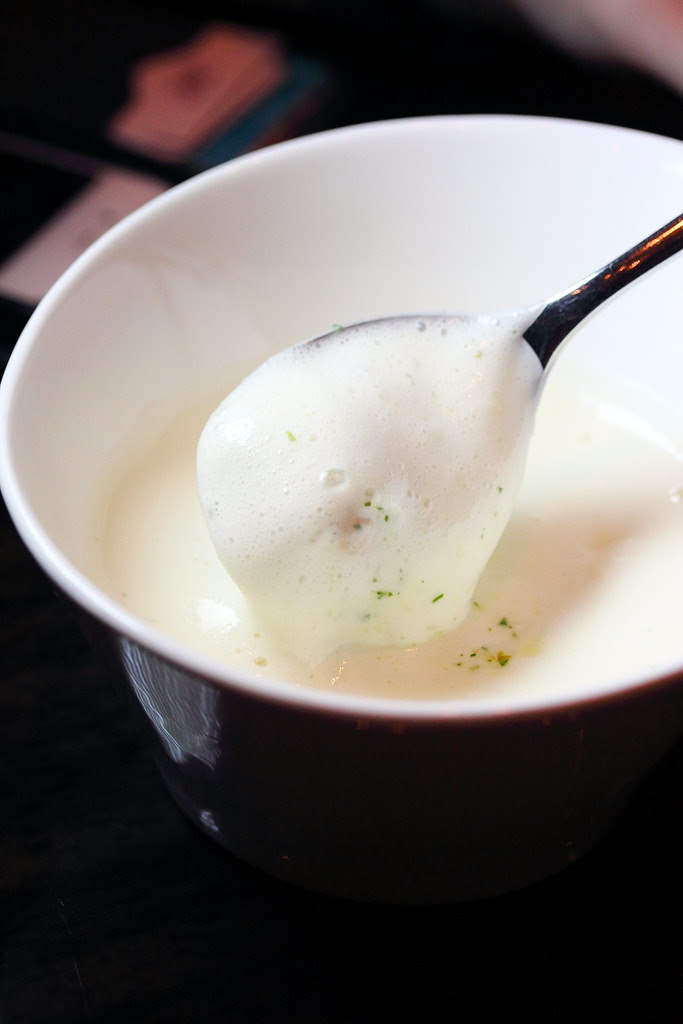 The classic Cauliflower Gratin ($17) was given a new twist whereby the cauliflower florets are buried in a feather light white truffle and cheese foam served with scamorza cheese. The cauliflower florets were cooked in milk, lightly breaded and deep fried to a golden brown crisp. The modern rendition of the class cauliflower gratin was exciting and bursting with flavours. 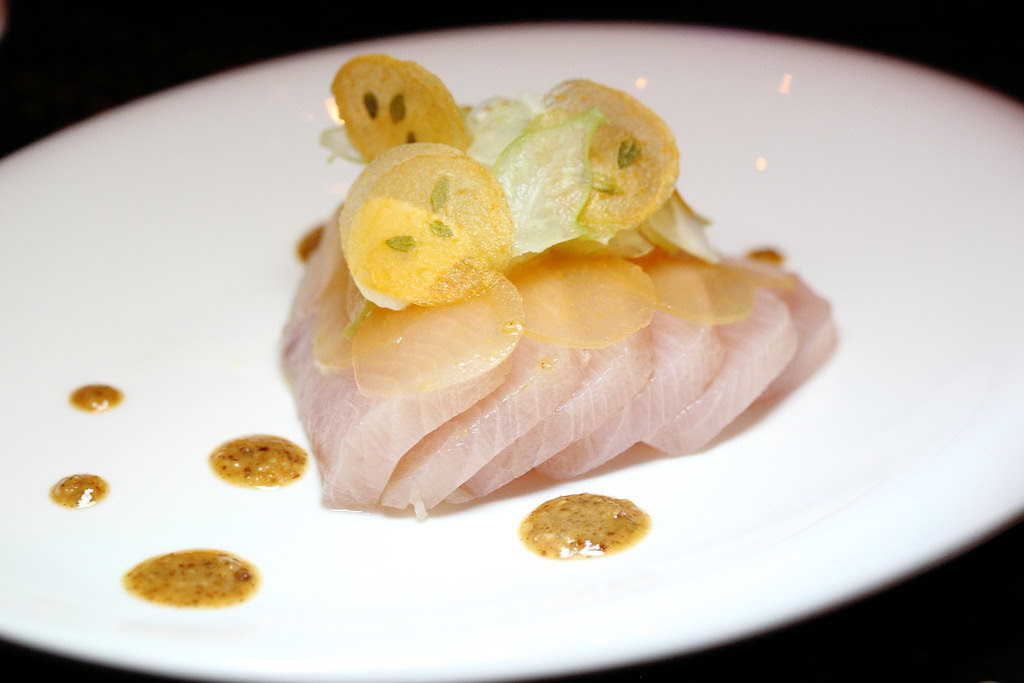 The philosophy of Chef Ivan's culinary approach to food can be clearly appreciated in the Hamachi Carambola ($26). The Hamachi was cured in seasonal citrus fruits and served with pickled starfruit, silvers of pickled garlic, dehydrated melon flavoured with thyme and walnut praline. I was told to have a bit of everything on the plate together. I was glad that I followed the advice as I was blown away by how perfect the accompaniments accentuated the dish to a new level of enjoyment. 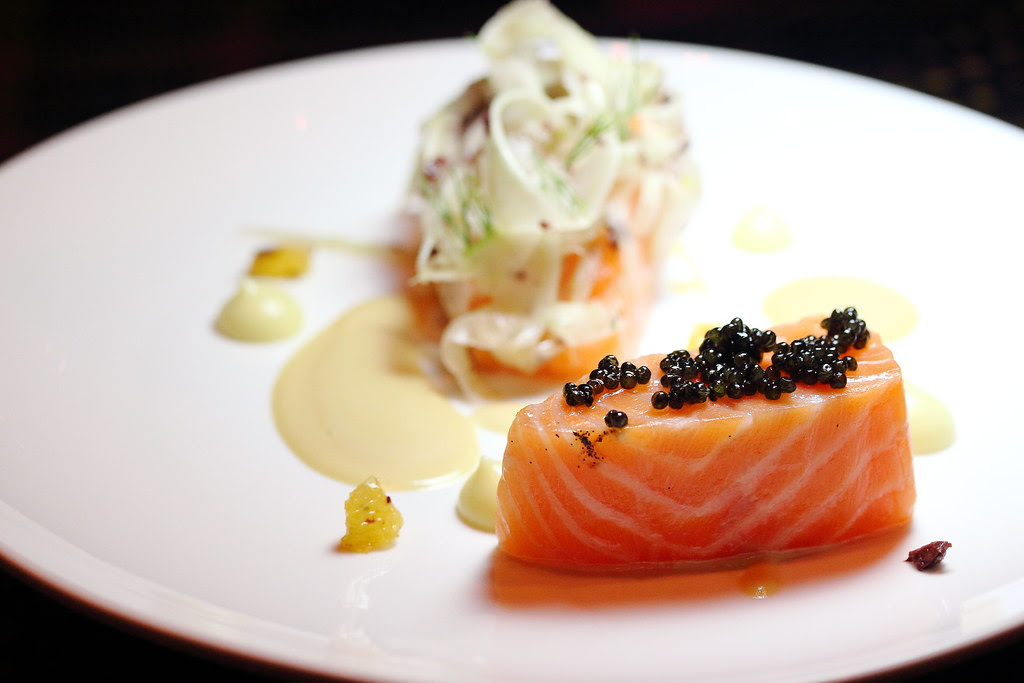 The Tahitian Vanilla Confit Salmon was brined in a salt and sugar solution for half day before being confited in olive oil and Tahitian Vanilla. The beautiful salmon was cooked to perfection that simply melted in the mouth. Love the extra crunch from the refreshing shaved fennel that further enhanced the dimension of the whole dish. 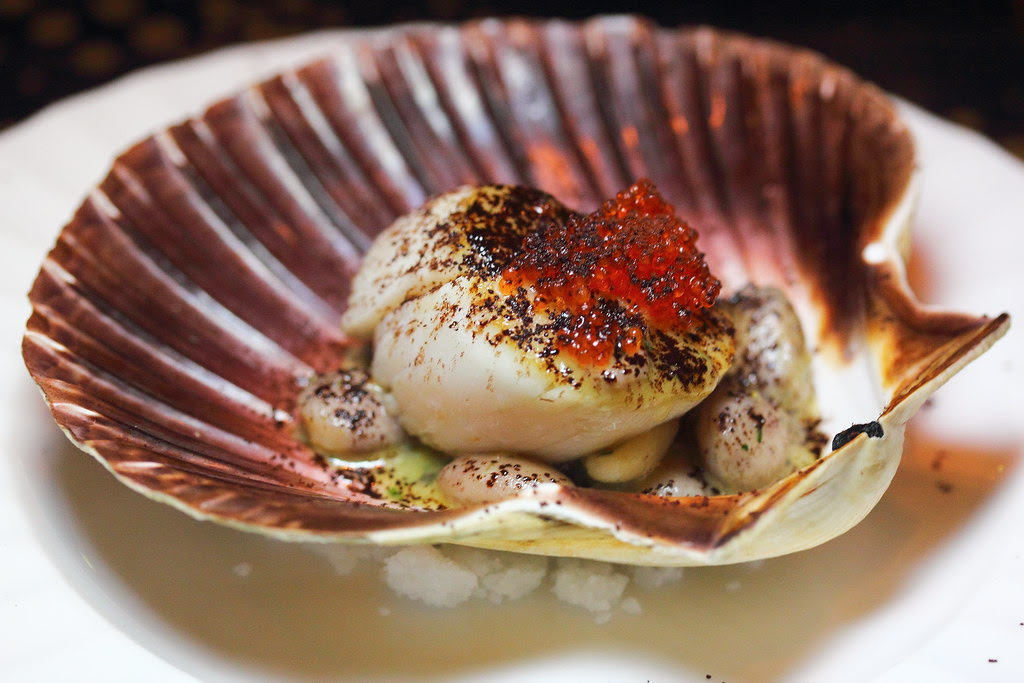 The HD Scallops was gently seared, served with borlotti beans and garnished with tobiko. Recently I watched Masterchef China and got to know that chocolate if used correctly can enhance the flavour of seafood. Coincidentally the scallop was dusted with cocoa powder and I was able to experience first hand the wonderful chemistry of the cocoa powder accentuating the flavour of the scallop. 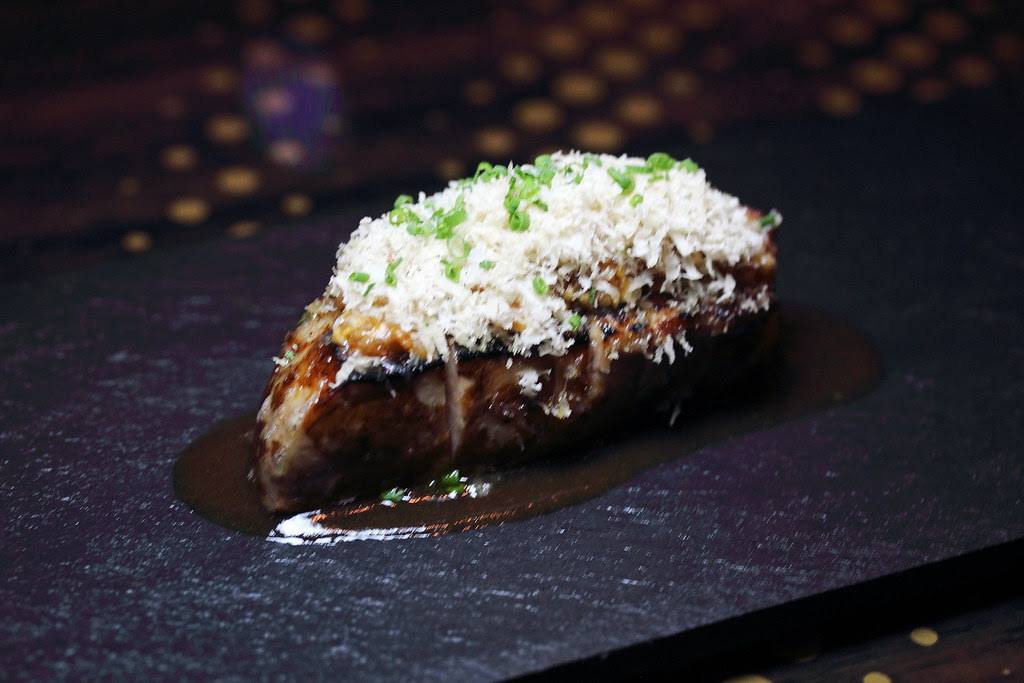 The Foie Gras Satay is served with a tamarind gel infused with lemongrass and ginger, finished with grated chestnuts and a peanut satay sauce made with chilli, lemongrass, ginger and gula melaka. Finished with a blow torch, the sou vie foie gras had a creamy texture that I had yet to experience before. The selection of Asian influenced ingredients was a great rendition of the classic dish. 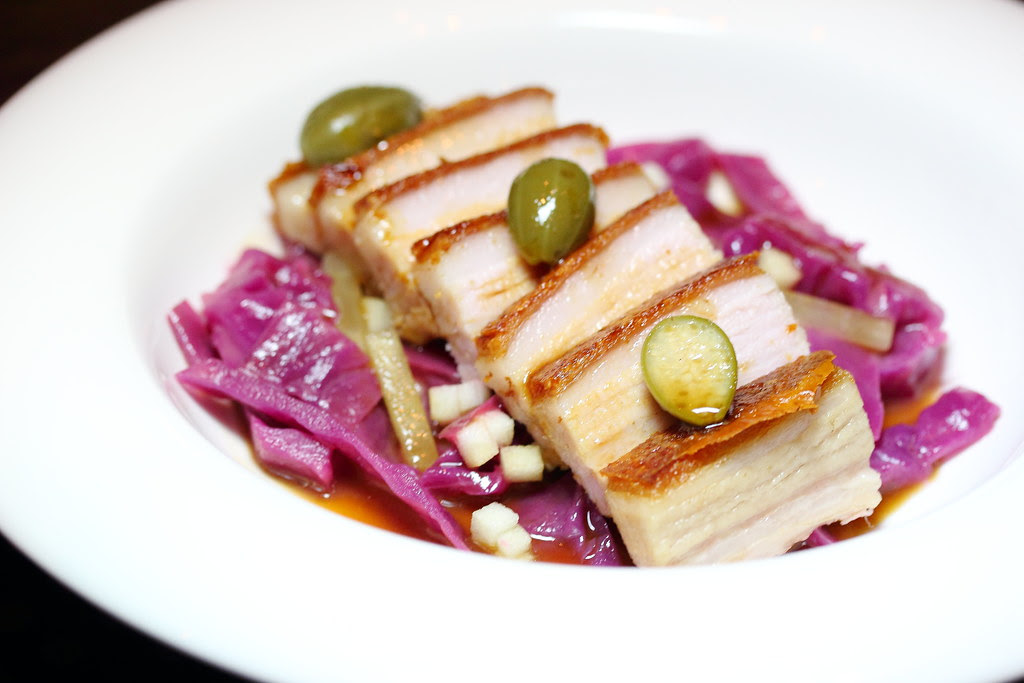 A dish that I was looking forward to try is the 48HR Pork Belly that was cooked in its own brine for 48 hours. The pork belly was fork tender but the red cabbage that was braised for 2 hours in butter and apple cider vinegar stole the limelight for me in this dish. 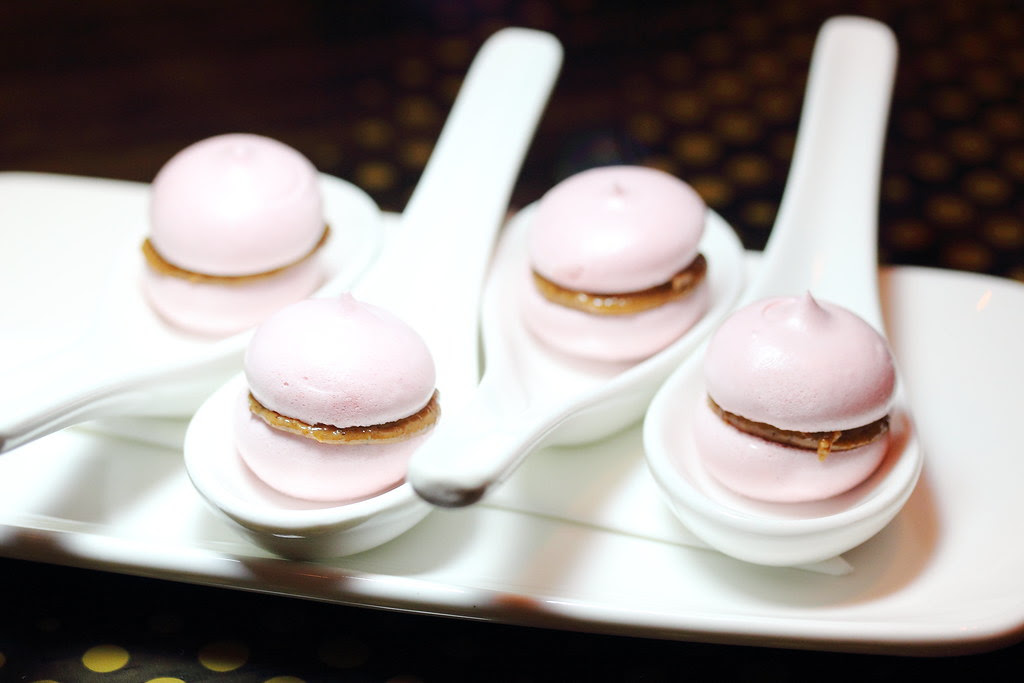 Before moving to dessert, complimentary Strawberry Meringue was served to help cleanse the palate. The combination of acidity and sweet creaminess was a surprising cleansing agent preparing me for the next round of desserts. 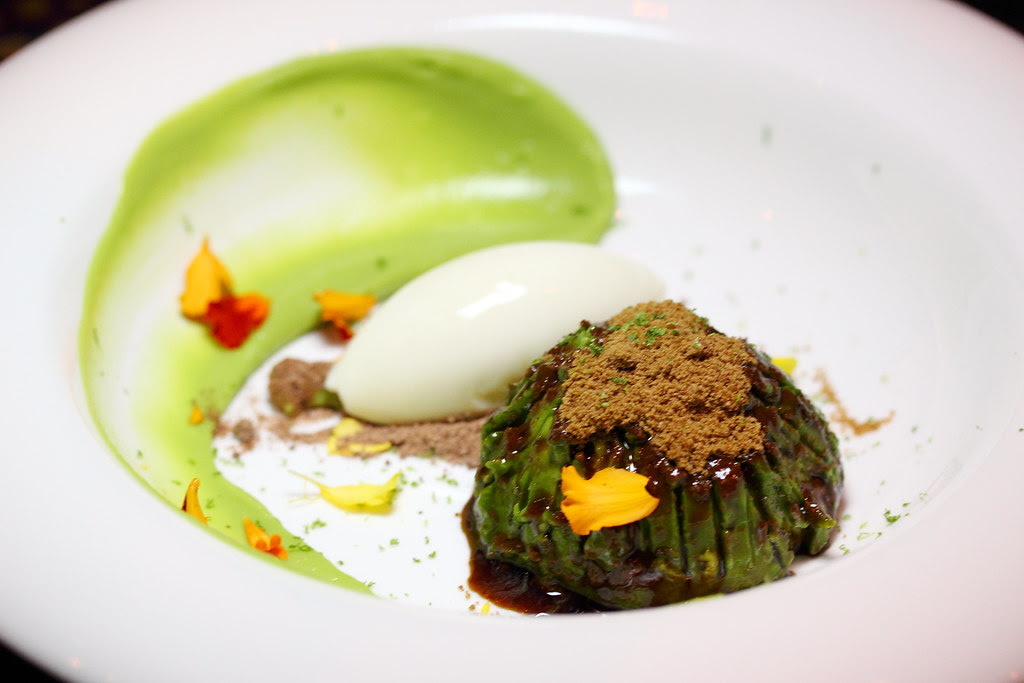 Inspired by the chef's childhood memories, the Avocade & Lime had the avocade filled with goat cheese and drizzled with a few spoons of Okinawa black sugar. It was a good dessert but I felt it was not something many locals may like it. 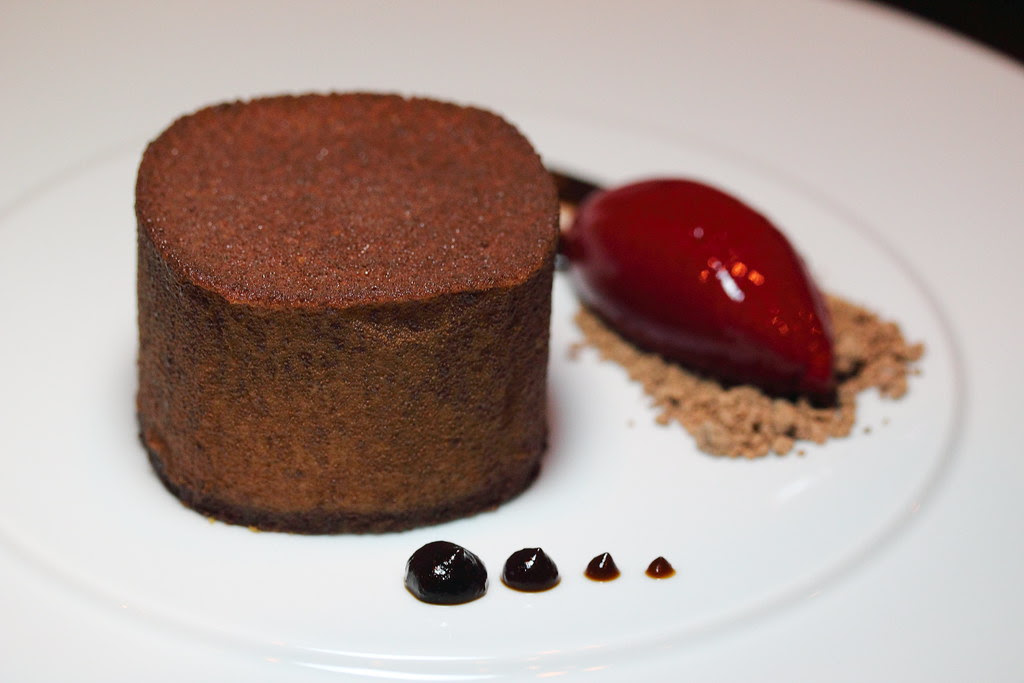 Served with blackcurrent sorbet, the classic interpretation of the Tiramisu had a surprise of popping candy biscuit base at the bottom. Probably one of the best tiramisu I have eaten. 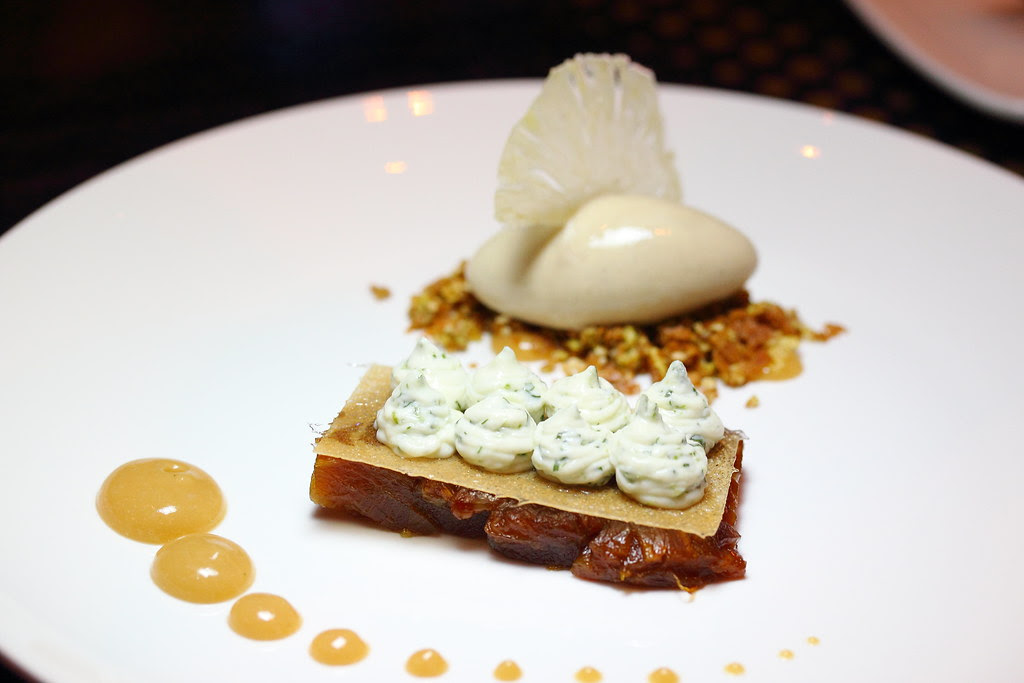 I could not help to associate the Pineapple Tatin to the traditional Chinese pineapple tart snack. Much effort was put into slow cooking the Sarawak pineapple in caramel till they formed gum like consistency. It was a dessert that I will order again.

Dinner experience at Bacchanalia was like attending a chemistry class where your palate was exposed to different flavours and textures working harmoniously together. The used of Asian ingredients in the reinvention of classic dishes made it closer to the heart and easier for diners to appreciate the chef's philosophy approach to food. I left the restaurant not only with a satisfied tummy but a bag of knowledge that was hard to come by.

Posted by DerrickTan at 1:50 PM