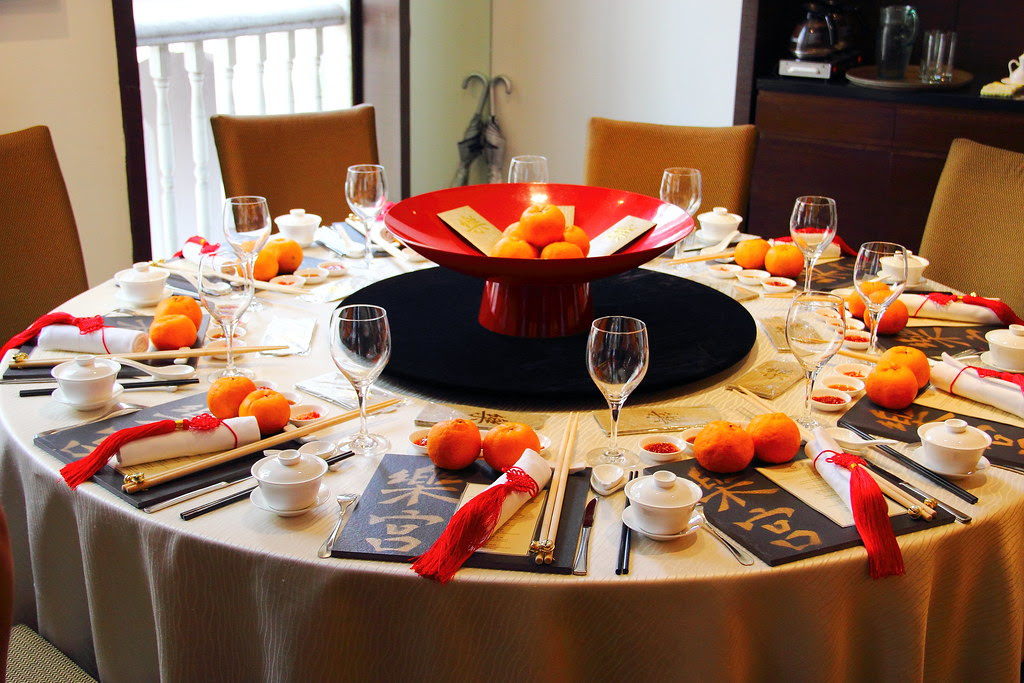 With Lunar New Year around the corner, many families will be planning for their reunion dinner to usher the year of the magnificent Snake. Have you make plans for your reunion dinner? If not, you can check out Park Palace at Grand Park City Hall. 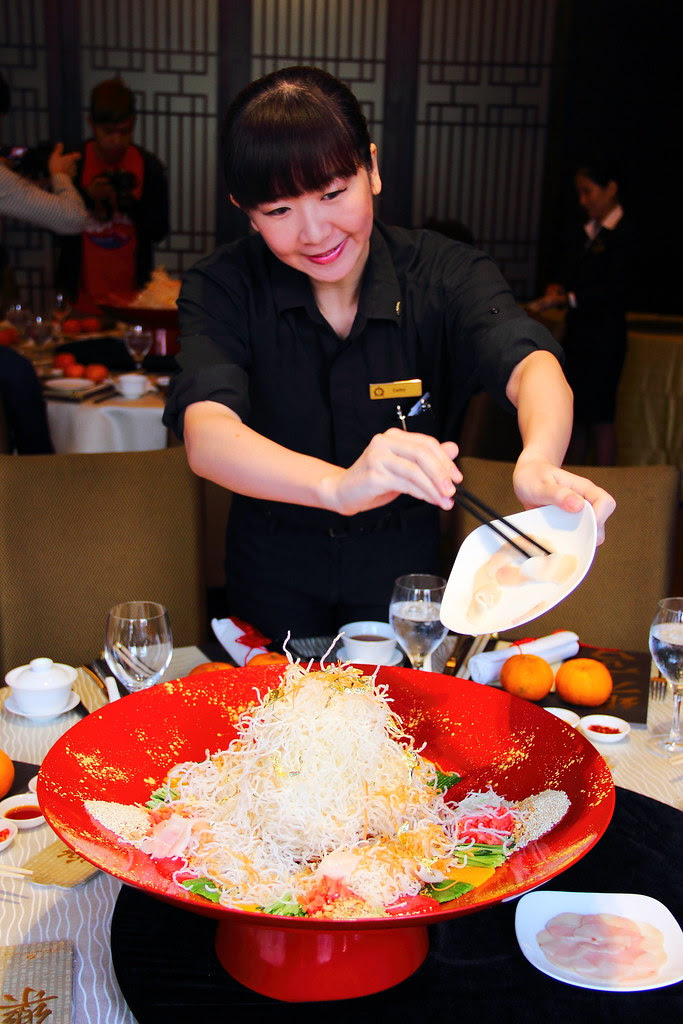 Since it is Lunar New Year, how can we not have the Prosperity Toss or Lo Hei. For a change, try the signature Shunde Yu Sheng with Yellowtail ($88++) at Park Palace. Doing away with the usual shredded vegetables and sweet plum sauce, Shunde Yu Sheng is a refreshing twist from the overwhelming sweetness. The delicacy is made up of a base of crispy fried vermicelli and adorned with slender slices of ginger, spring onion, crunchy capsicums and finely grounded peanut, tossed in a special concoction of fragrant peanut oil and premium soya sauce. 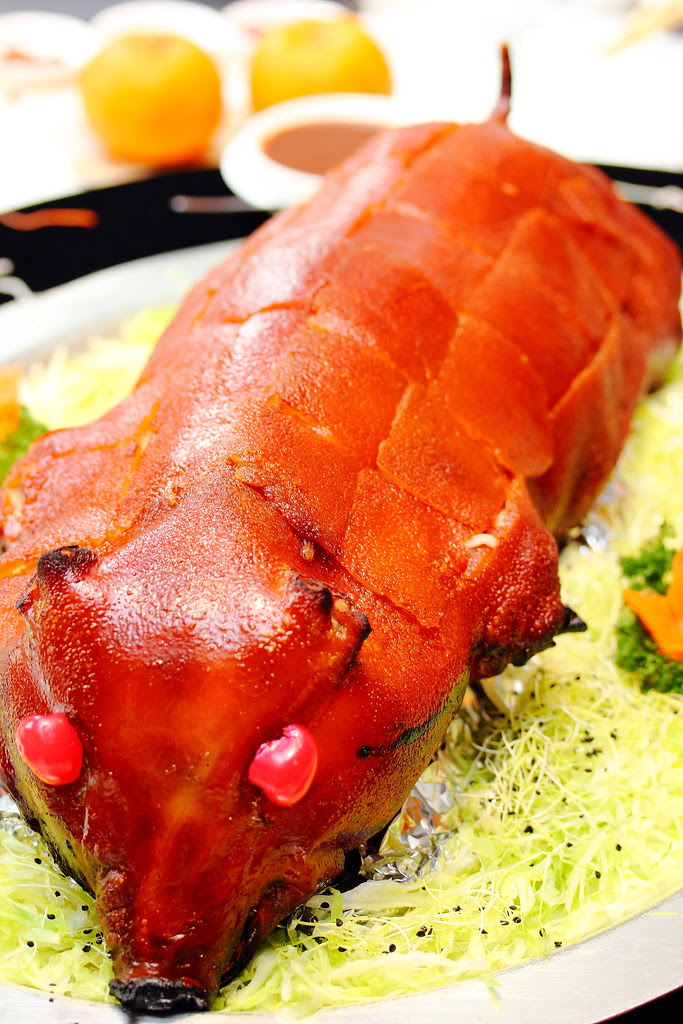 The Imperial Suckling Pig ($238++)  weights a good 5kg and need to order at least a day in advance. The piglet is air dried for a day before roasting. Served 2 ways, it was first eaten like Peking Duck. The skin was thinly sliced that it felt like eating crackers. I was commenting to my fellow diners that I could not find a trace of fats on the skin. 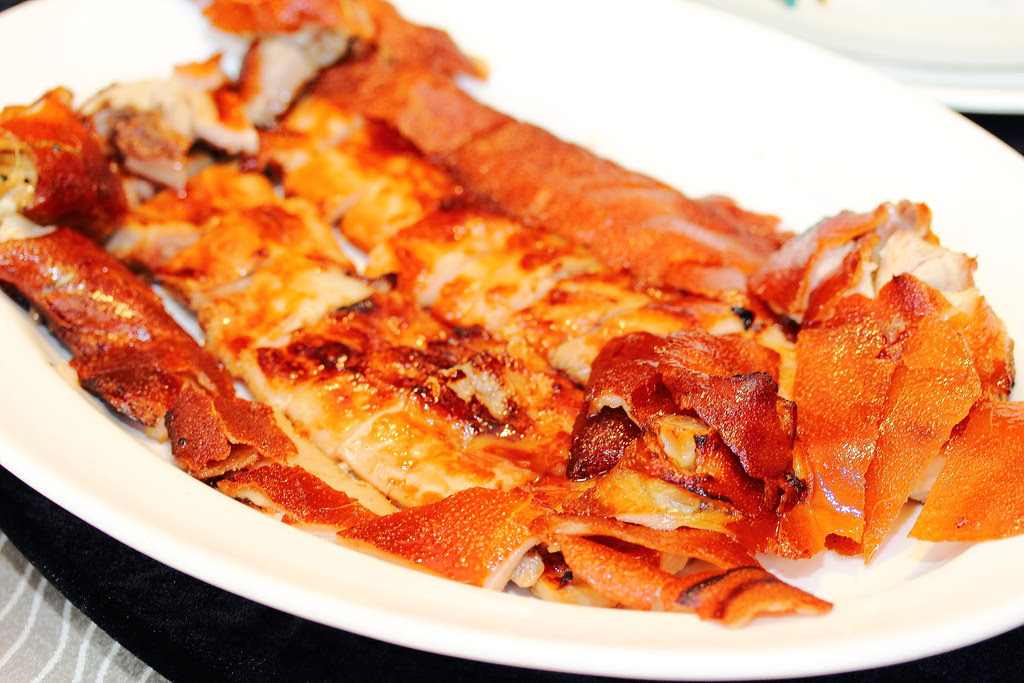 After skinning the piglet, it was brought back to the kitchen for a second roast with lemongrass. The suckling pig itself was already a delicacy but with a hint of fragrant lemongrass simply accentuated the flavour by a notch. 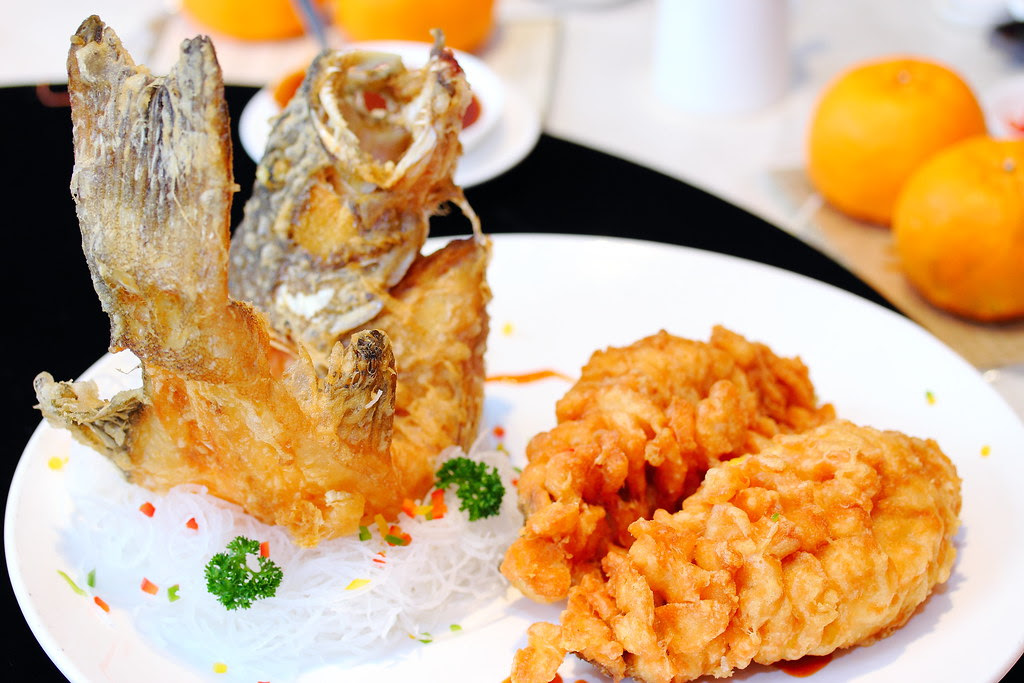 During Lunar New Year, fish is an important dish on the dining table symbolising prosperity and vigor. The presentation of the Golden Happiness Crispy Garoupa also reminds me of the chinese phrase "Carp leaping over Dragon's Gate (鲤鱼跳龙门)" a cultural symbol of courage, perseverance and accomplishment. I find that it is very thoughtful of Park Palace to fillet the fish as reunion dinner will have old folks and children. This will avoid any bony incident. 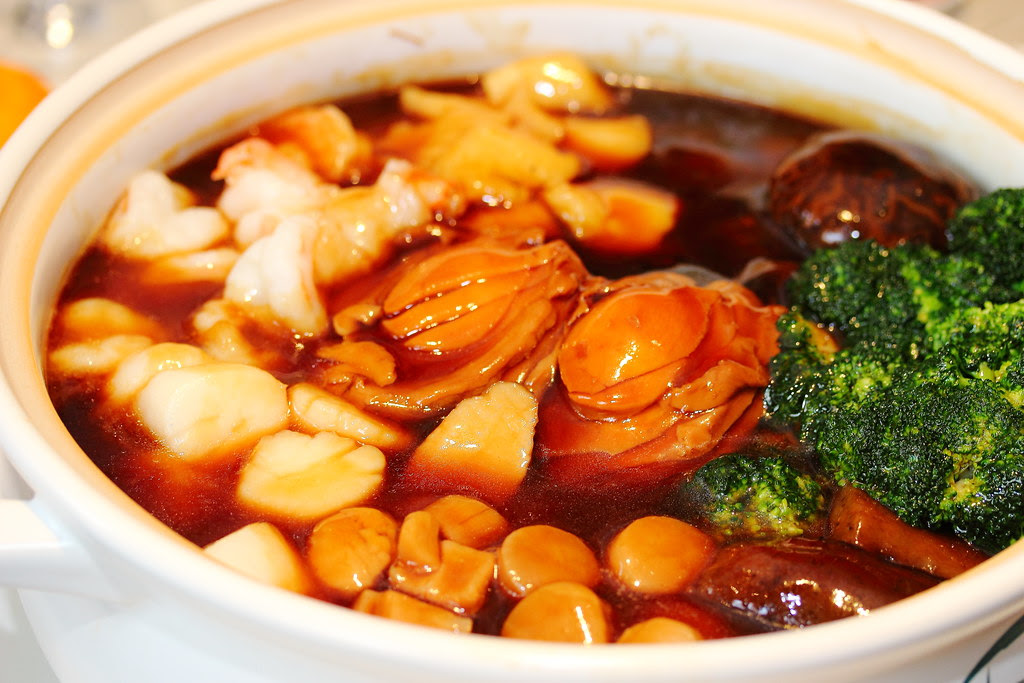 Boasting a 18 luxurious ingredients, the Prosperity Flambe Pen Cai ($268++ for 6pax, $428++ for 10 pax) was flambeed with cognac to bring out the rich flavours and tastes of the ingredients. This is my first time having Pen Cai and was thrilled with joy discovering the different ingredients in the treasure pot. There were sliced abalones, sea cucumber, conpoy, prawn balls, roasted duck, roasted pork belly, duck web, soya sauce chicken, fatt choy, black mushrooms, lotus root, broccoli, radish, beancurd skin, gingko nuts and black fungus. 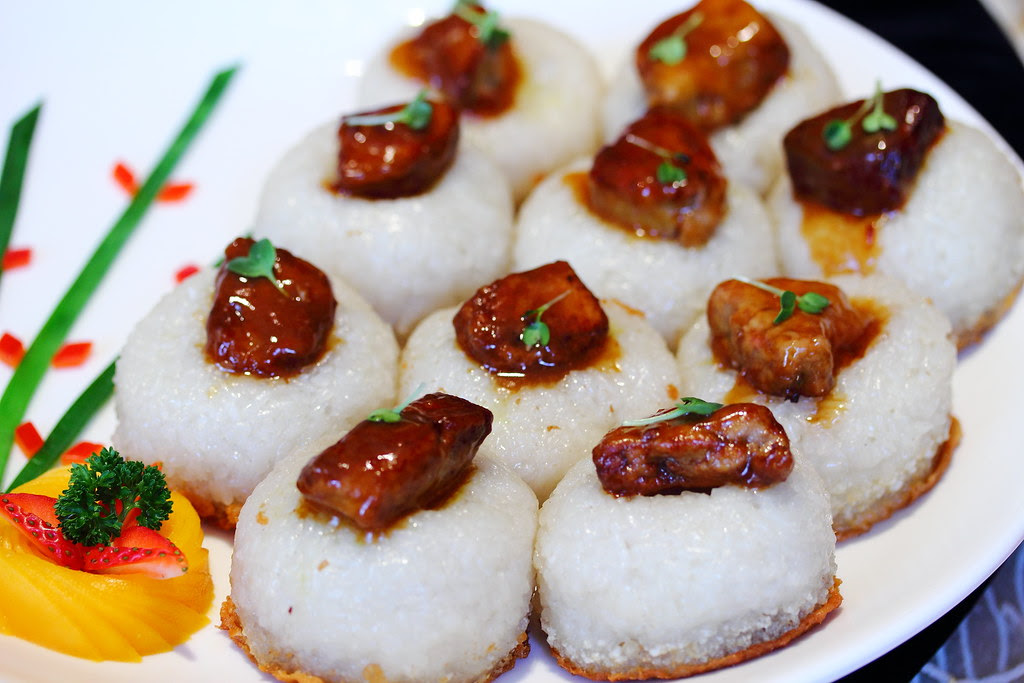 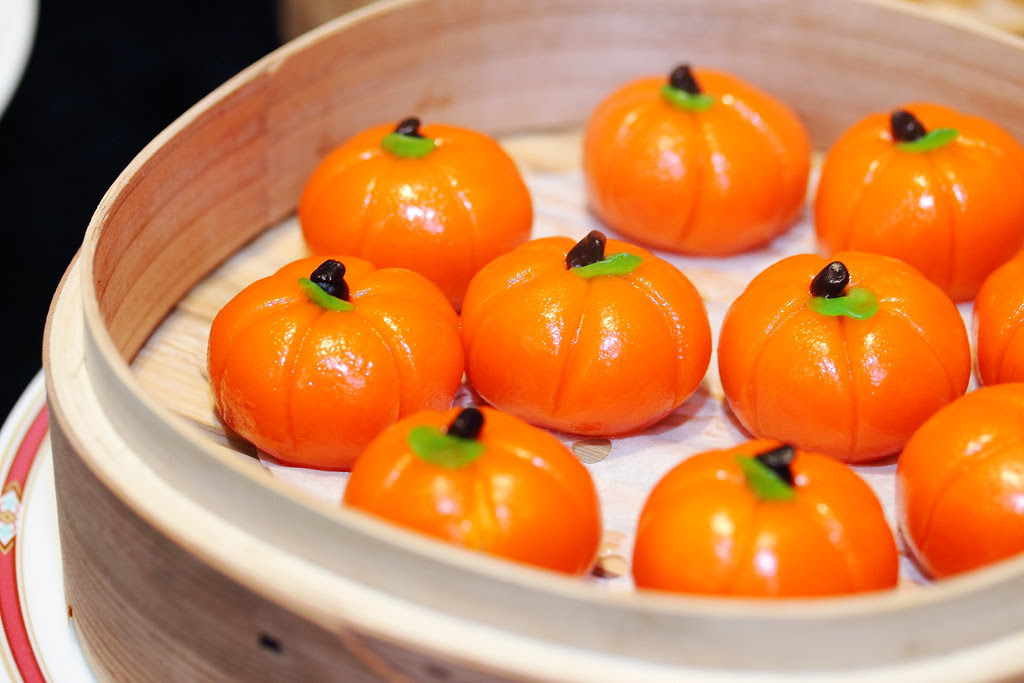 The Steamed Mini Pumpkin Dumpling with Green Bean Paste was really beautiful. Unfortunately the artistic appearance does not translate to the execution. We found the flour to paste ratio was rather inconsistent. Flavour wise we also felt that it can be sweeter.

If you have not decide where to have your reunion dinner or company lunar new year function. Take the opportunity to book early to enjoy 20% of the Lunar New Year Set Menus or ala carte. Get a complimentary bottle of house red wine per table of minimum 10 pax too by quoting "SG Food on Foot" during reservation.

Posted by DerrickTan at 2:33 AM