BBQ by the Beach @ Sentosa 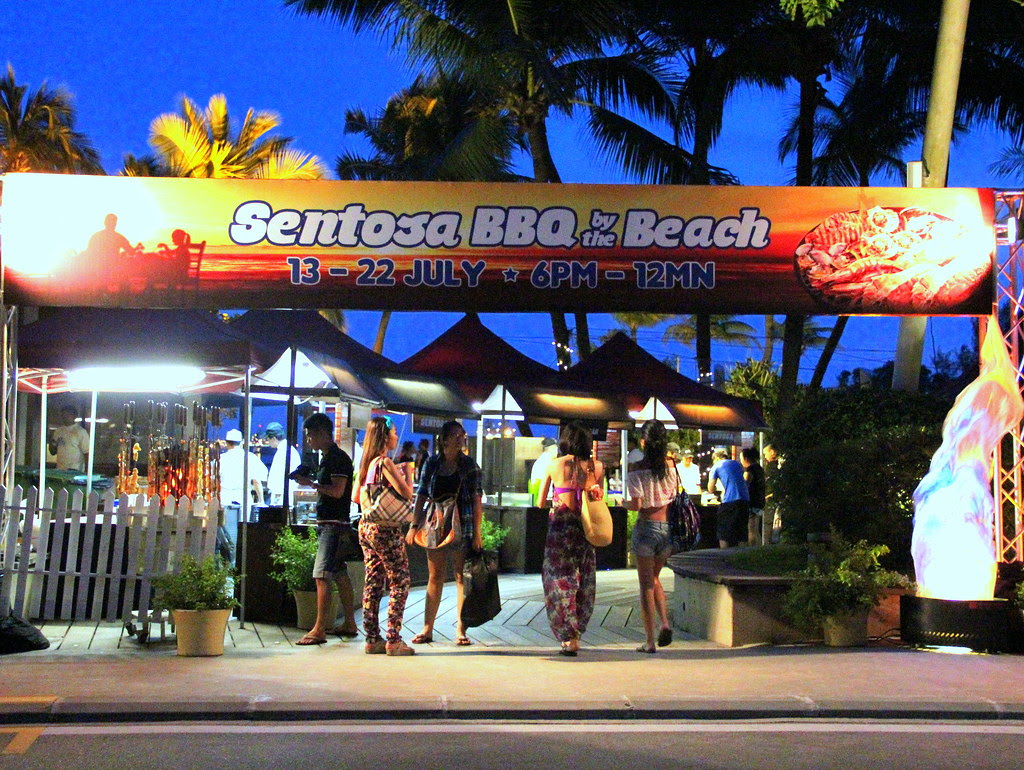 Back in May 2012, I blogged about Sentosa celebrating its ruby (40th) anniversary this year and has lined up a series of events, activities and treats to recollect 40 fabulous years as Singapore's iconic playground. Sentosa held its very first Penang Buffet by the sea from 10-20 May 2012. This month from 13-22 July, Sentosa is having BBQ by the Beach at Siloso Beach. 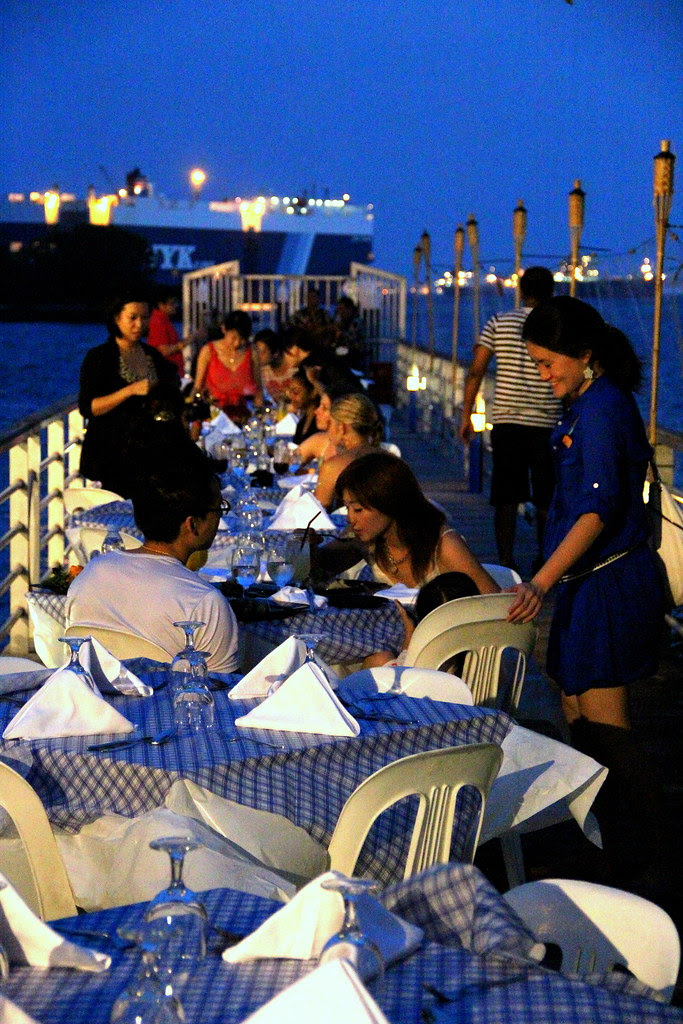 As part of Singapore Food Festival, diners will get to savour a variety of seafood barbeque. Sentosa BBQ by the Beach features different types of BBQ techniques such as the traditional Hawaiian underground oven known as the "imu", vertical grill and the regular barbeque grill. Meat lovers are also in for an extraordinary taste with the Texas style ribs laced with Bourbon and beer-marinated sausages. A feast not to be missed. 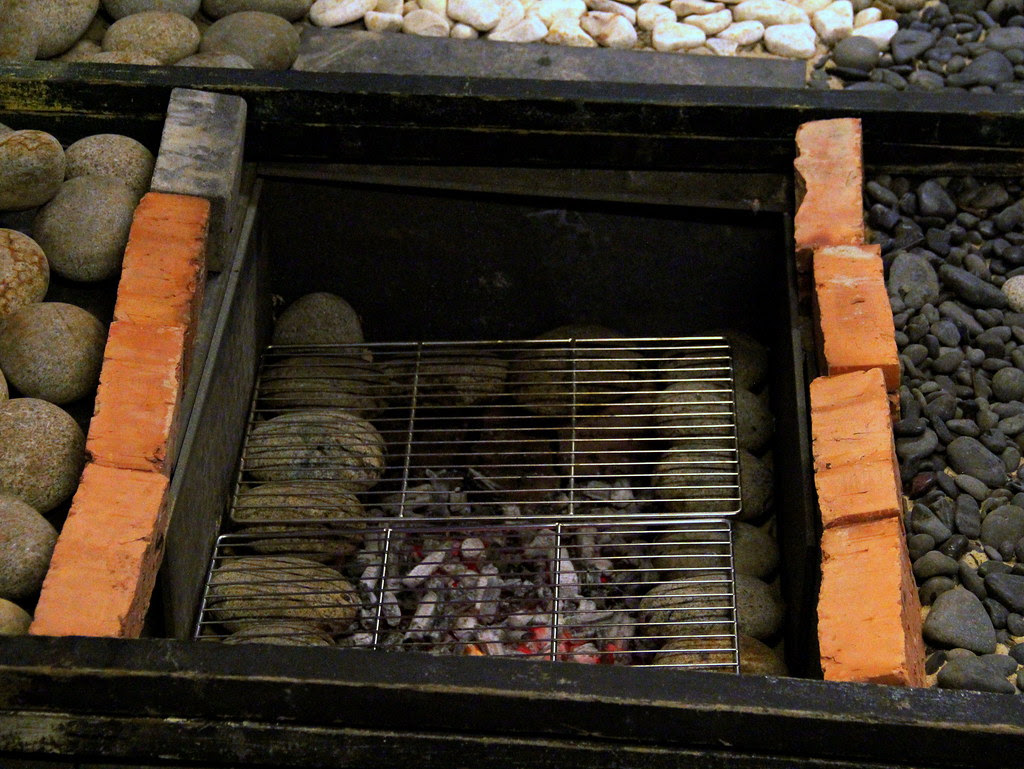 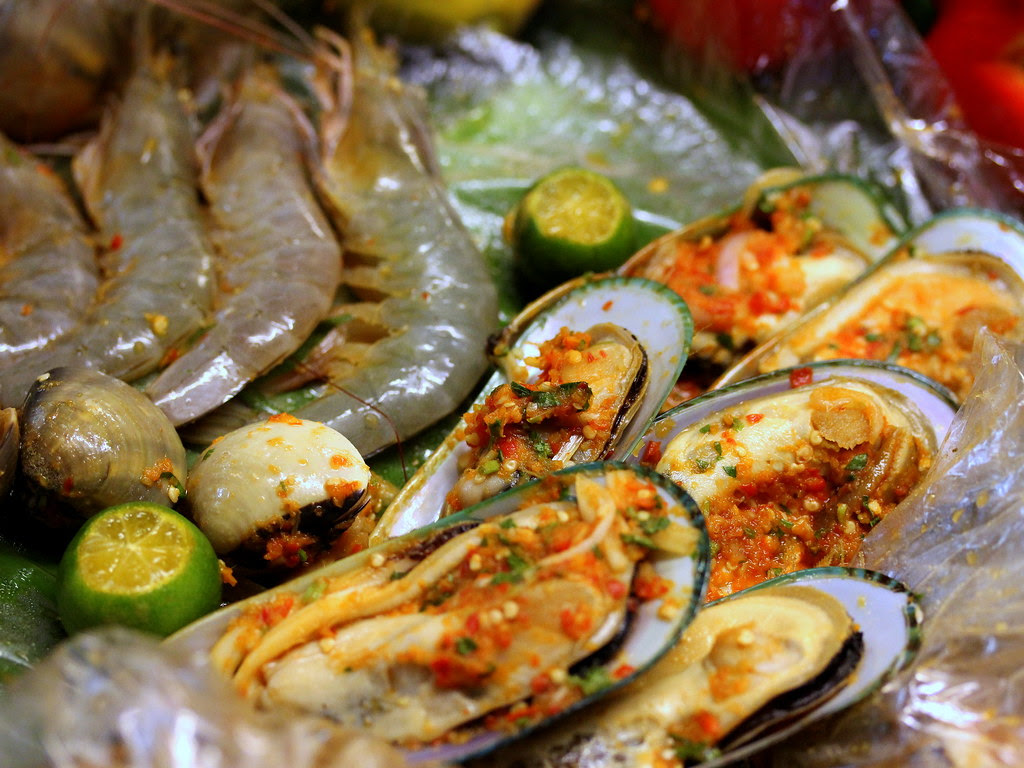 For the imu style barbeque, the team is using a combination of Pepes (Indonesian cooking method using banana leaf as food wrappings) and placing the wrapped aluminium foil with banana leaf into the underground oven to cook the seafood. 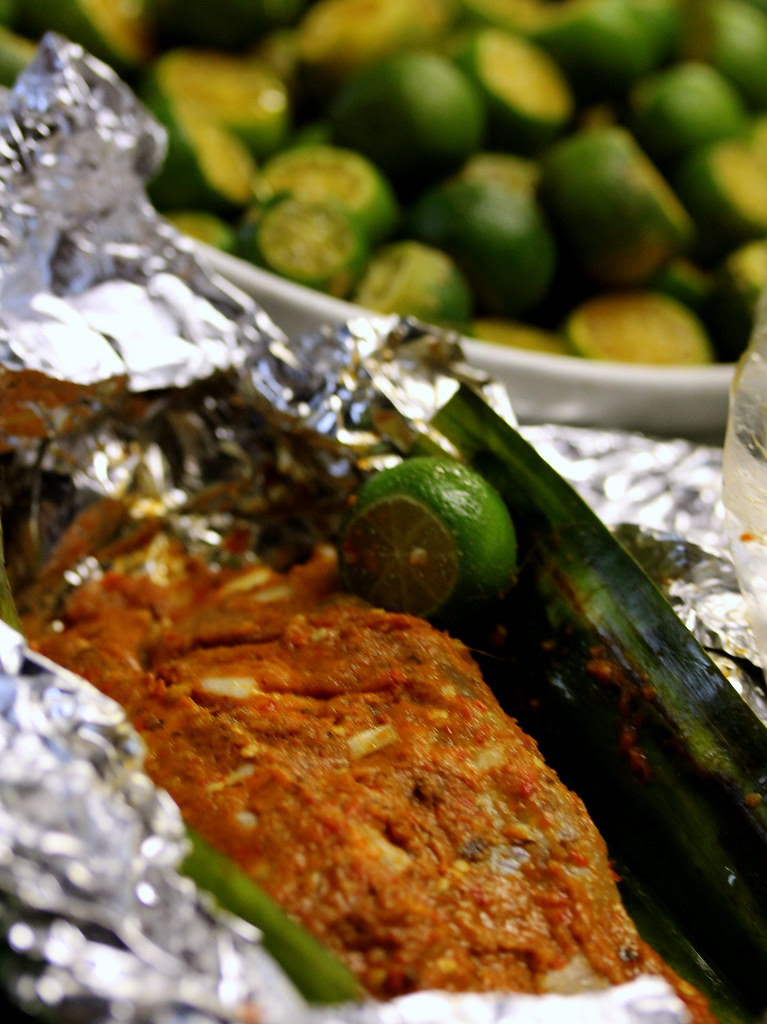 For my piece of Pepes Ikan Jawa ($10), the Seabass fillet with Javanese Sambal was cooked to perfection. The seabass was moist under the layer of sambal that packed a punch with a tad of banana leaf aroma. 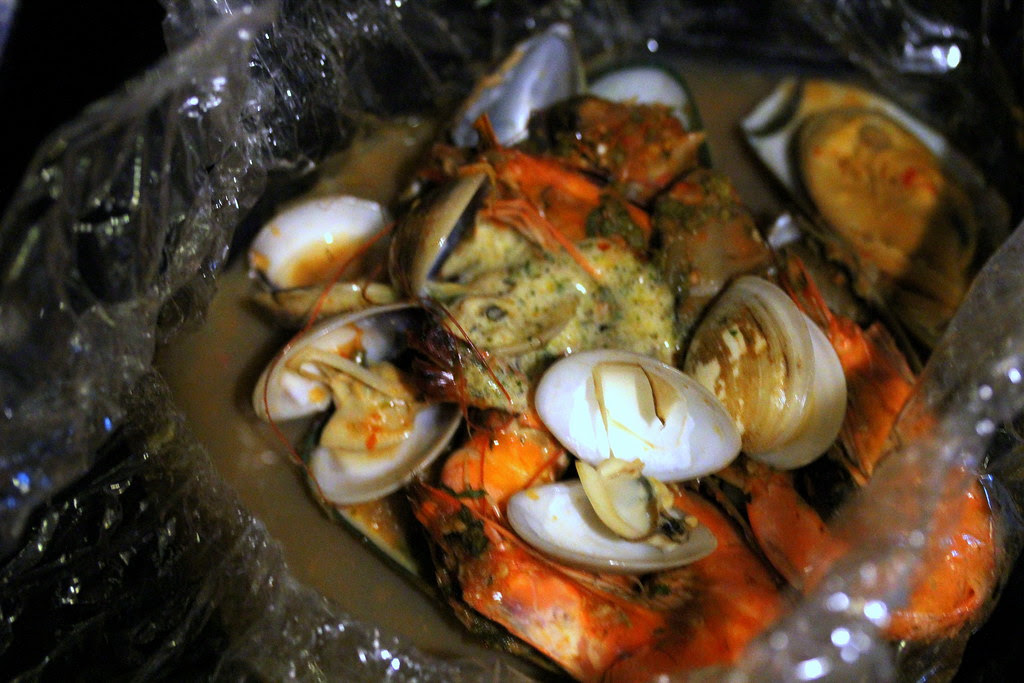 The Assorted Seafood in imu style barbeque was my favourite for the night. It was rather spicy due to the used of garlic and sambal. The broth was thick and had a robust seafood flavours. The Asian Spiced Marinated Shell Fish ($10), Pepes Half Shell Mussels ($5) and Pepes Prawns ($5) are priced individually. 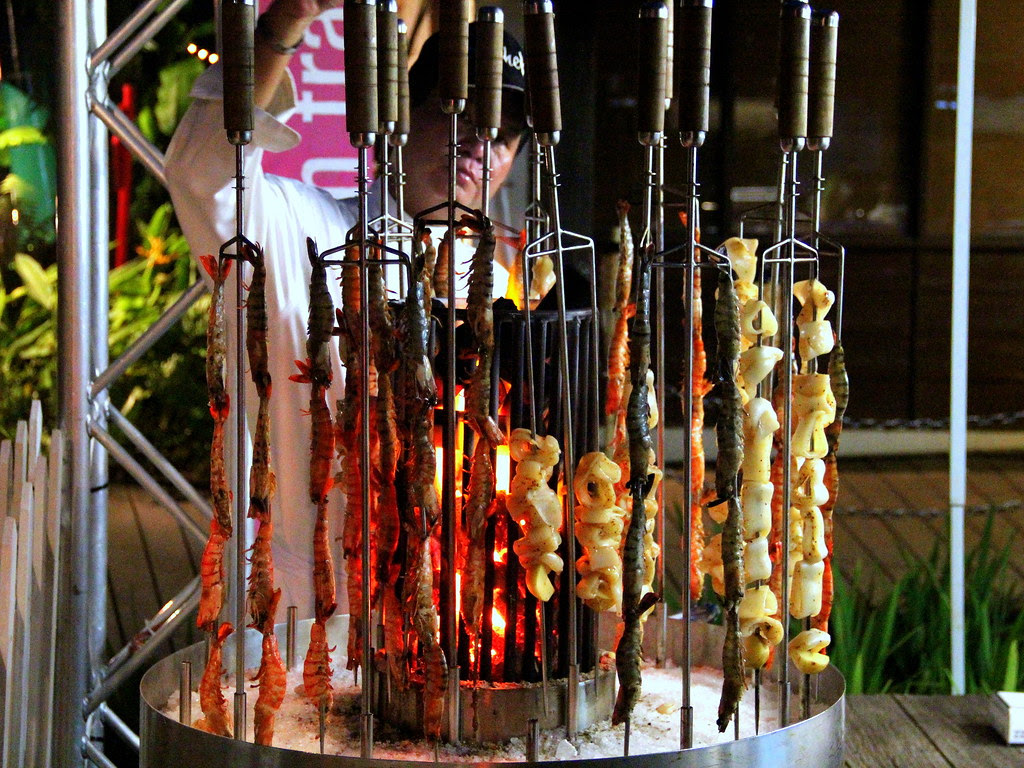 The Vertical Grill is an barbeque technique I have not  seen. The seafood were cooked by the heat radiated from the fire in the middle of the pit. 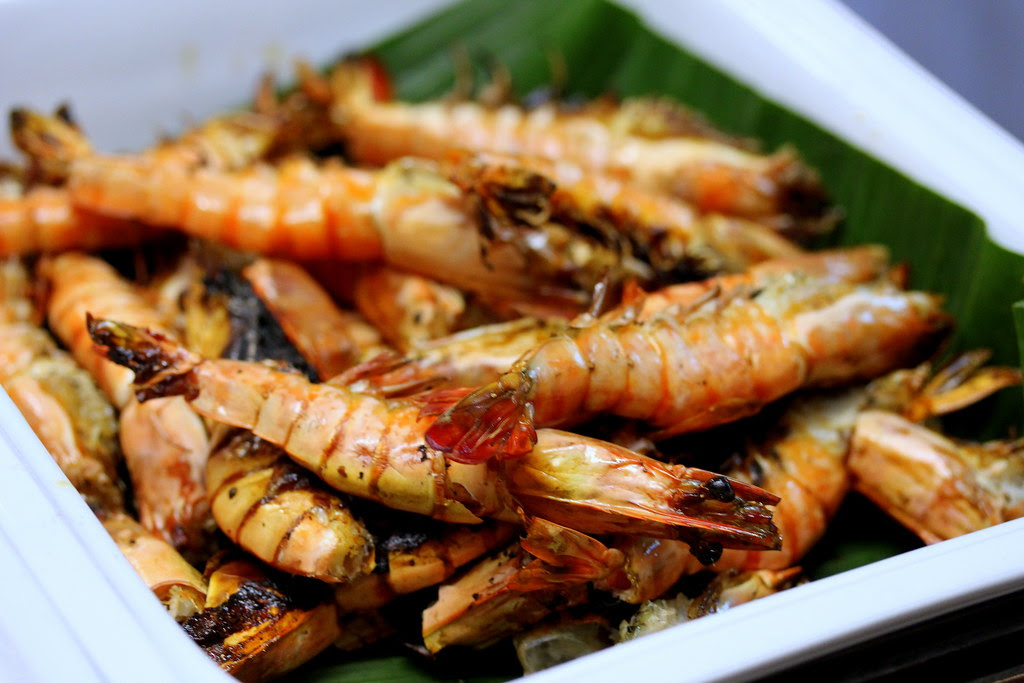 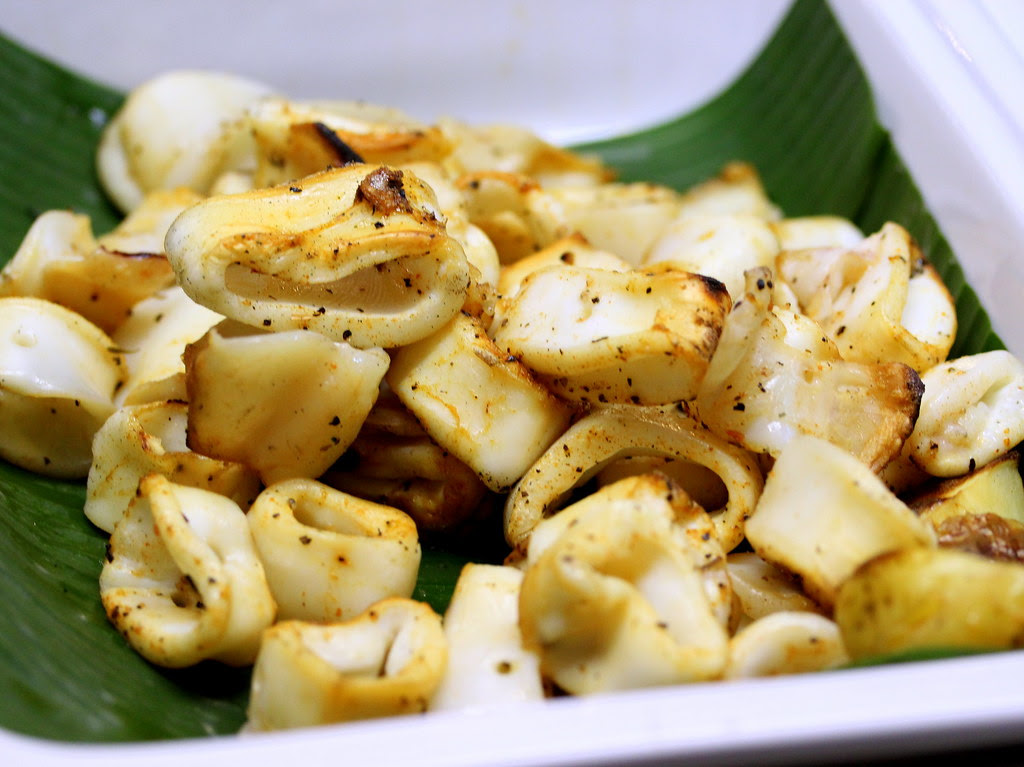 Normally barbeque it is quite hard to control the fire and usually you will end up with charred food. The used of heat from the vertical grill ensured that the Prawns ($5) and Squid ($5) were not overcooked with better control of the fire. 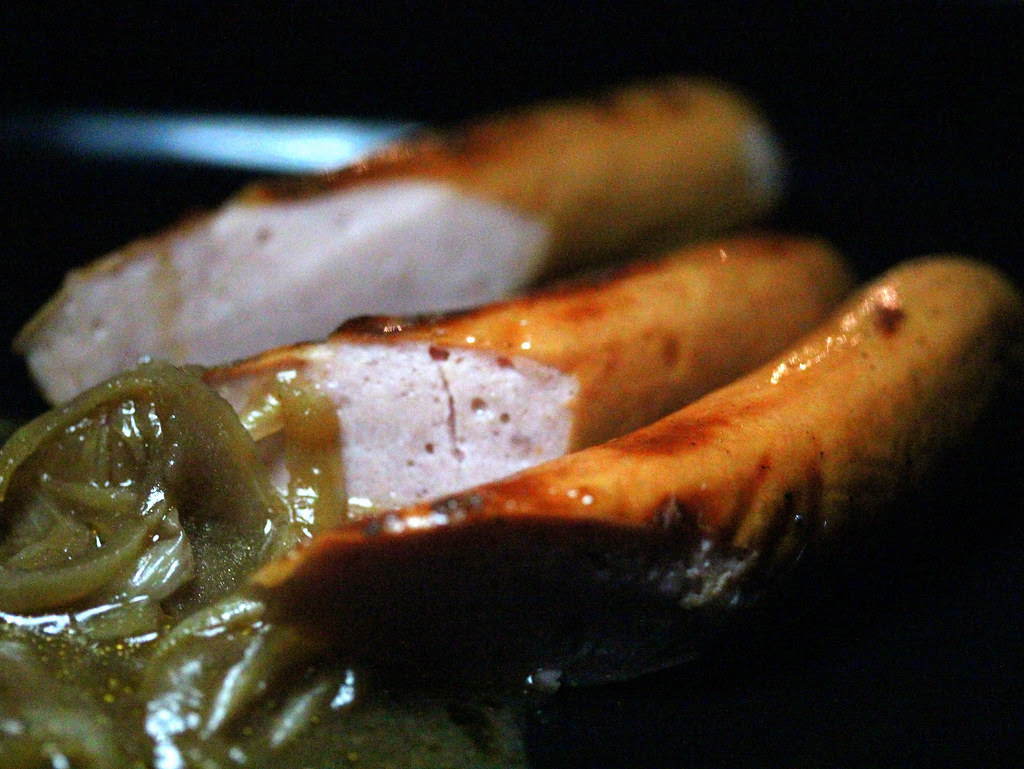 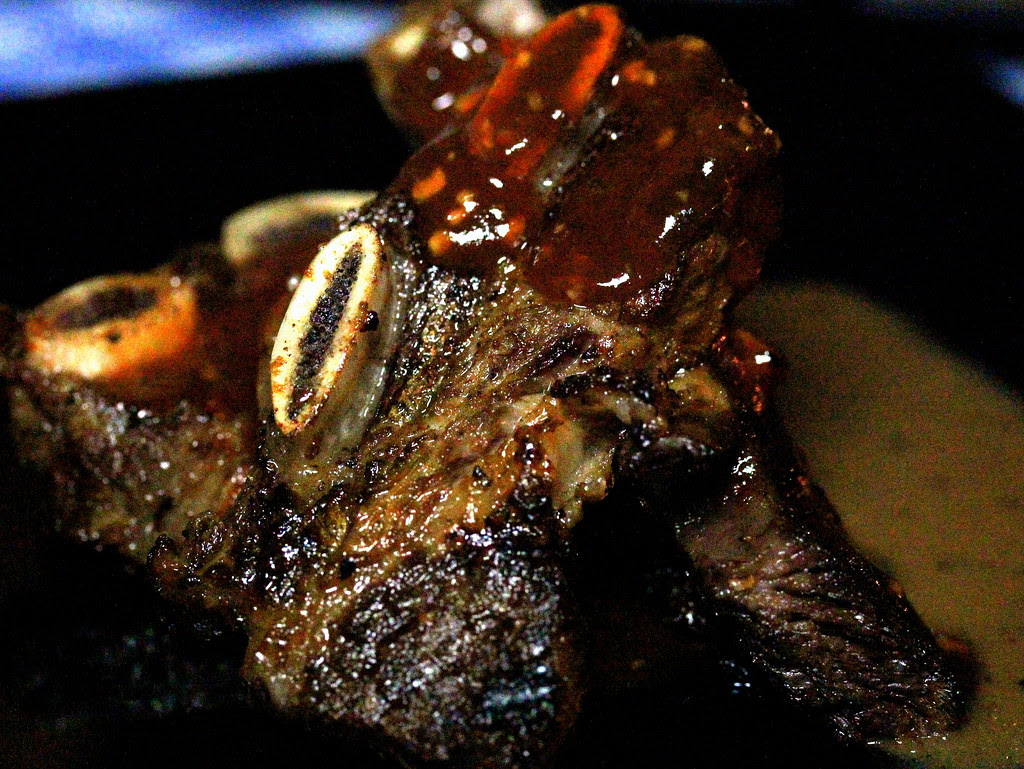 The BBQ by the Beach is not just about seafood. The Marker's Mark Bourbon Beef Rib ($10) in BBQ sauce will satisfy the carnivores.The beef rib were beautifully grilled to a smoky charred outer layer but juicy and tender inside. 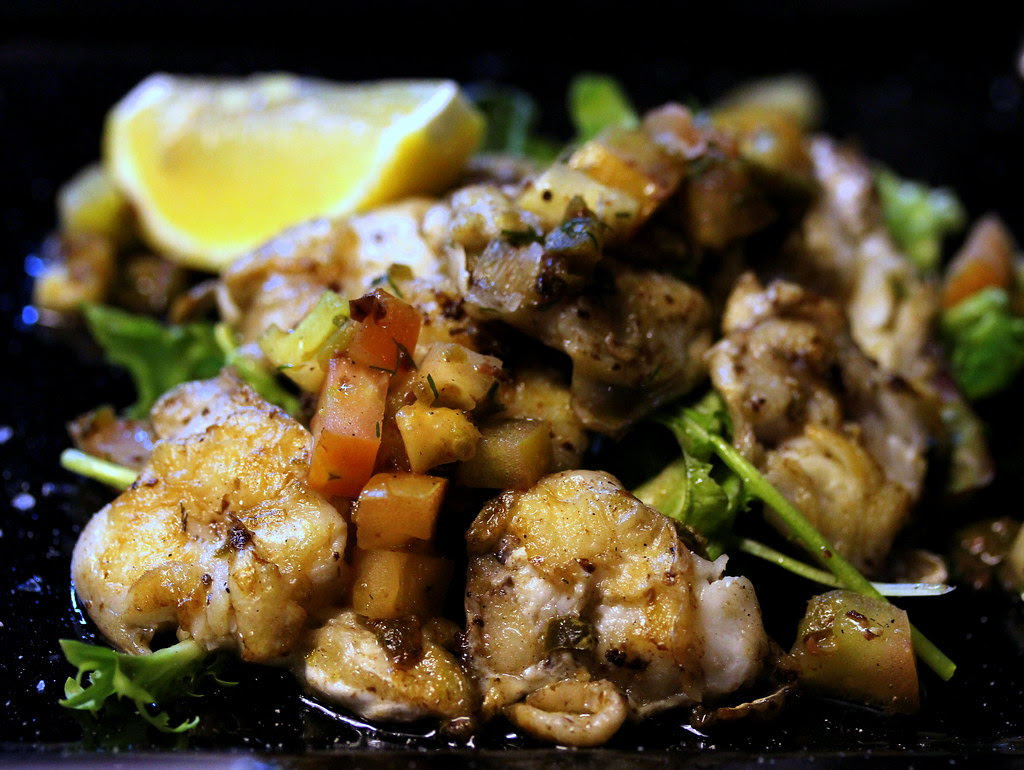 Several Food & Beverage outlets at Sentsoa also took part in the BBQ by the Beach event. For Coastes booth, the seafood was wrapped in a salted dough and cooked in open fire. The Marinated Grilled God's Tongue ($16) was served with jalapeno and tomato salsa. Cod's tongue is actually a gelatinous piece of flesh from the fish throat. The texture was a bit chewy. 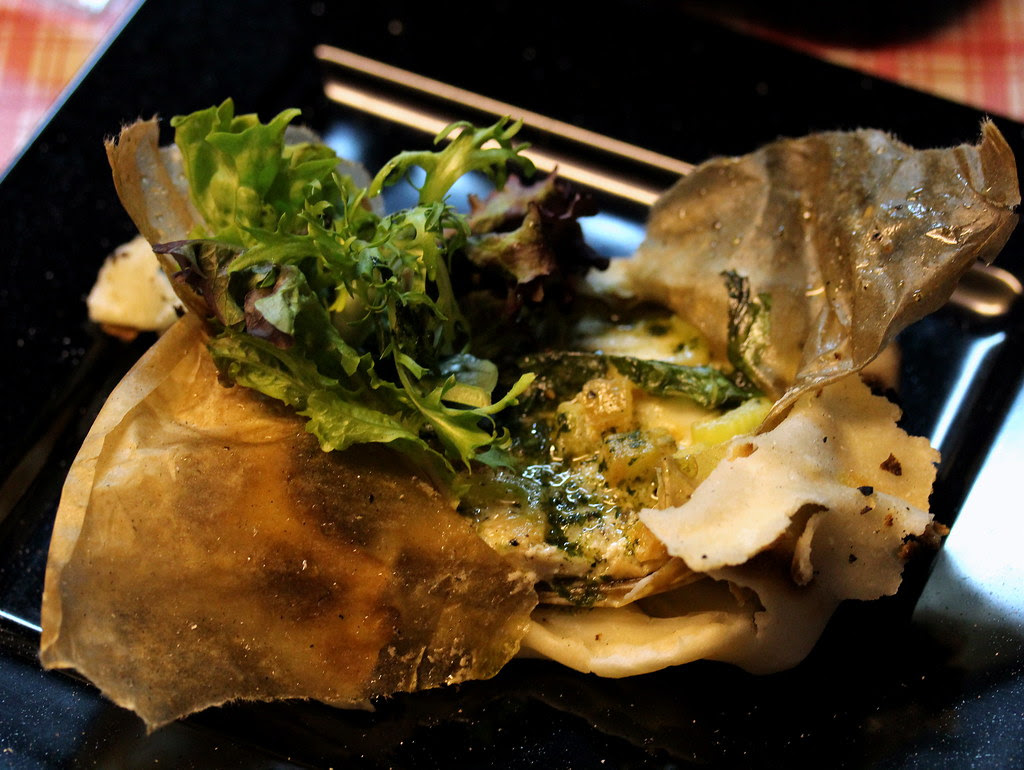 The Crusted Lemon Sole ($20) with fennel, lemon, capers and dill was quite nicely cooked. The Lemon Sole (a type of flatfish) did not look appealing but tasted quite pleasing. 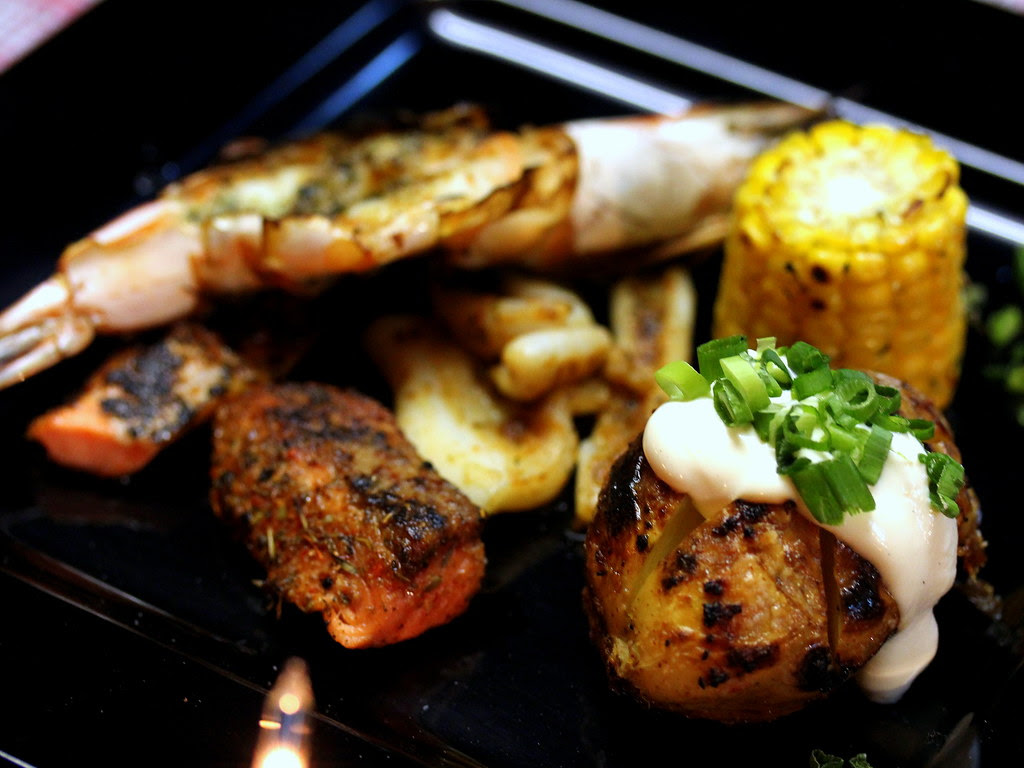 Over at Amara Sanctuary booth, the Seafood Platter ($10) was probably a good steal at the average of $2 per item.  The platter had king prawn, squid, salmon, corn and baked potato. 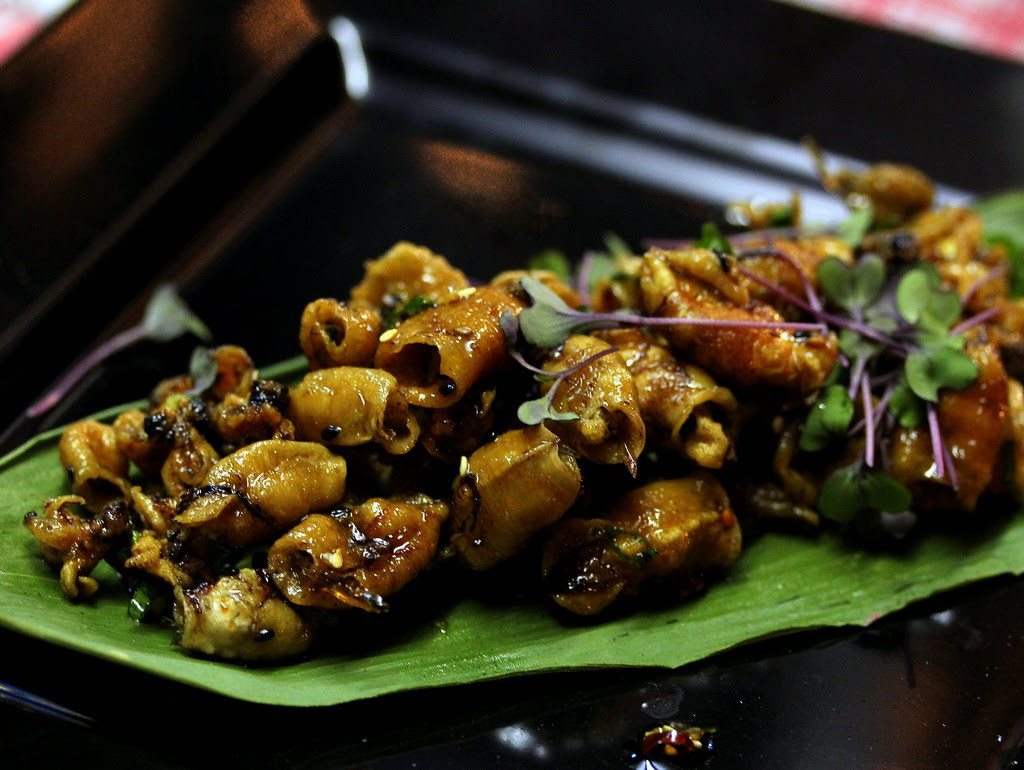 These Crispy Baby Squid ($12) was so addictive that one was not enough. It was so crisp that one would simply thought they were deep fried. 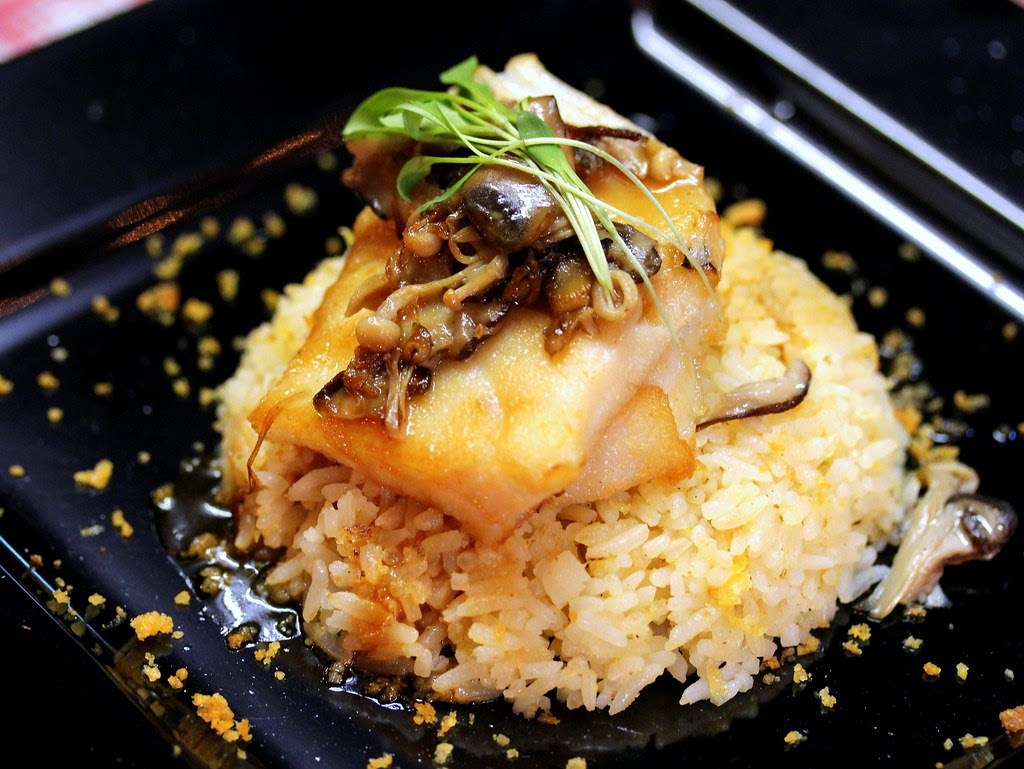 The Bonito Infused Cod Fish ($18) was my favourite for the night. The cod fish was cooked beautifully and  flavoured with a very appertizing sweet-savoury sauce. 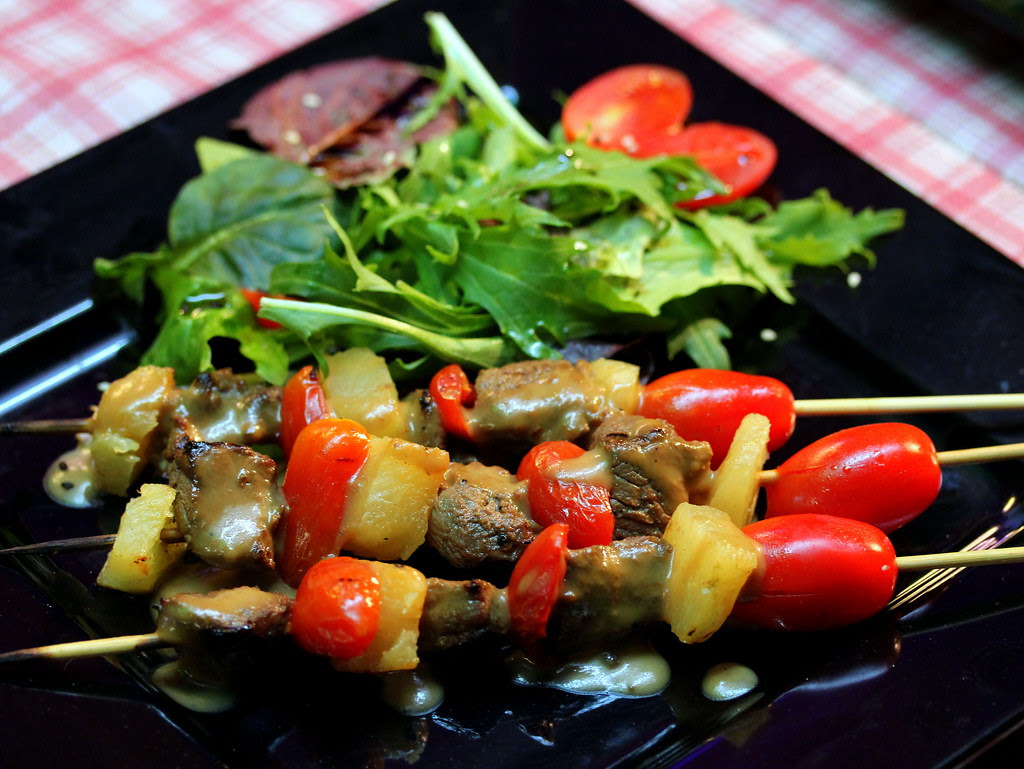 I also tried the BBQ Beef Stewers (4 sticks for $10) at Azzura booth. The jerk marinated beef cubes skewered with honey cherry tomatoes and char-grilled. The meat was moist and tender. It also comes with Prawn, Lamb and Chicken stewers ranging from $8-$12 for 4 sticks. 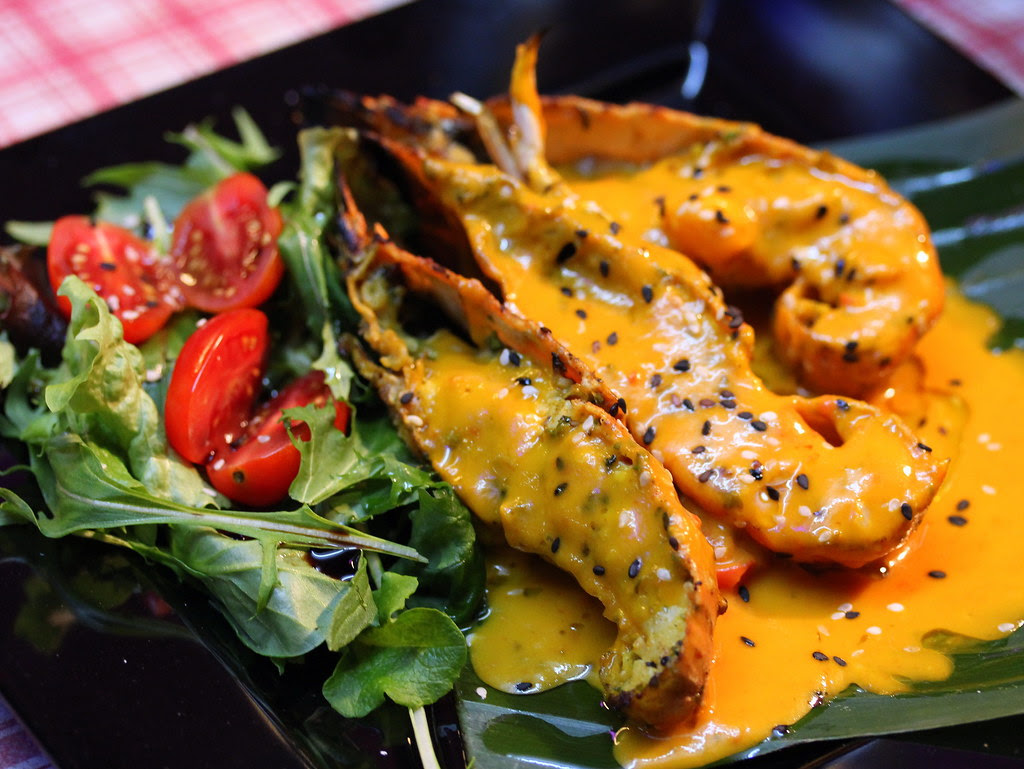 The lovely Mango Butter sauce paired with the BBQ Crayfish ($12) was a hit among the table. We even returned to the booth for anther 7 plates of it.

Thank you Sentosa for the invitation.

Getting There:
1) Sentosa Express - Board at Vivocity 3rd floor, drop off at Beach Station
2) Drive-in - Park at Beach Car Park
3) Taxi - Alight at Beach Station
- From Beach Station, walk to towards Song of the Sea to the direction of Siloso Beach. Follow the pathway to destination.
Posted by DerrickTan at 1:25 AM