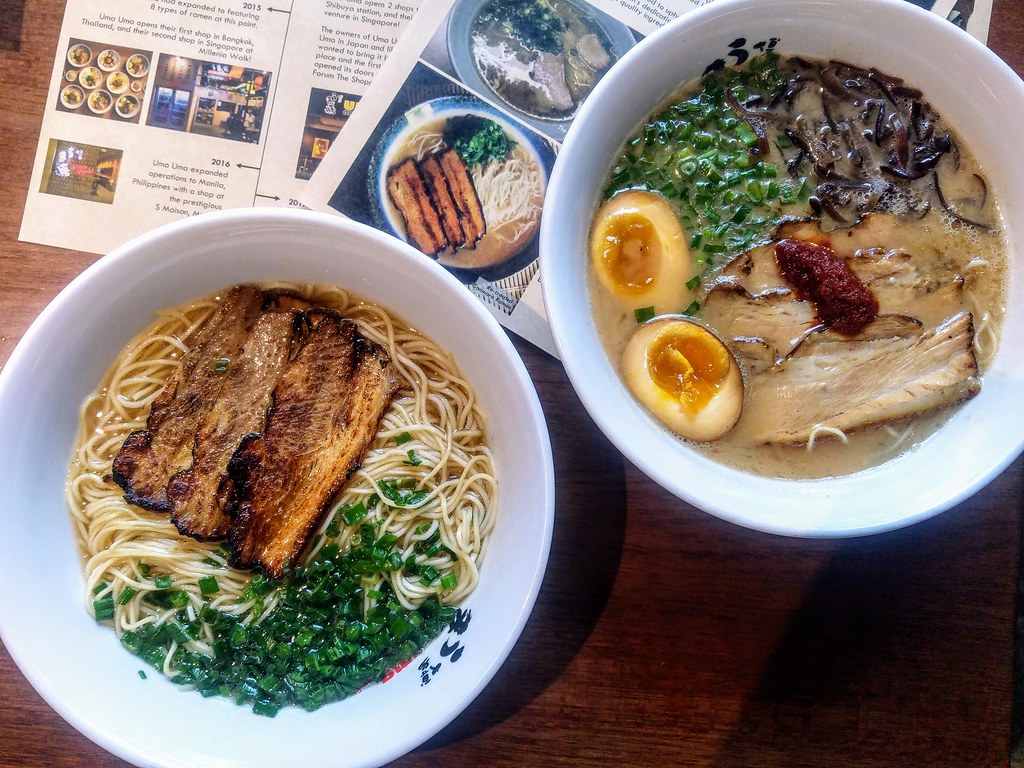 Before Uma Uma, there was Sanmaro. Sanmaro was the very first ramen stall in Fukuoka, founded in 1938 by Mr Mori Kentaro. It was born out of his love for the Chinese "La Mian" he had known in Shanghai, where he had worked and lived for a period of time. "Sanmaro", or 3rd street in English, was a street in Shanghai which meant a lot to him. 10 years after Mori-san handed over his legacy to the Teshima brothers in 1953, Sanmaro was eventually renamed Umaro, and finally to Uma Uma in 1994. 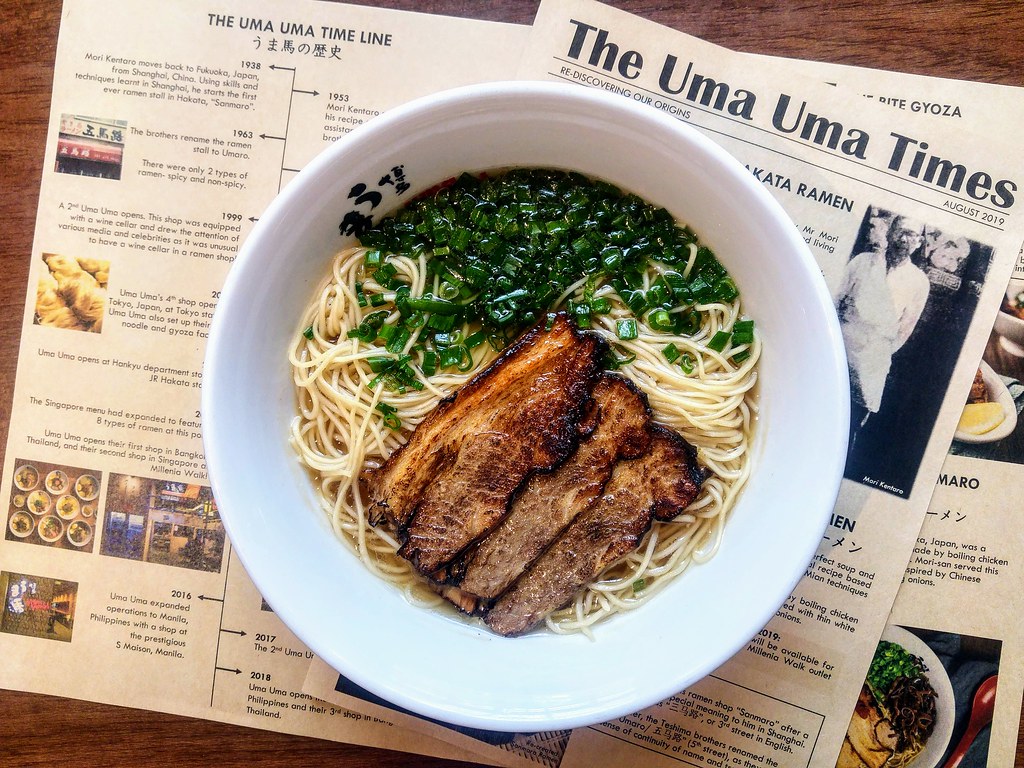 The Original 1938 Sanmaro Ramen brings you back to the post-war era when gas supply was scarce. The first Hakata ramen in Fukuoka was simple - thin white noodles in a light broth that was made by boiling chicken and pork bones for 4 – 6 hours. 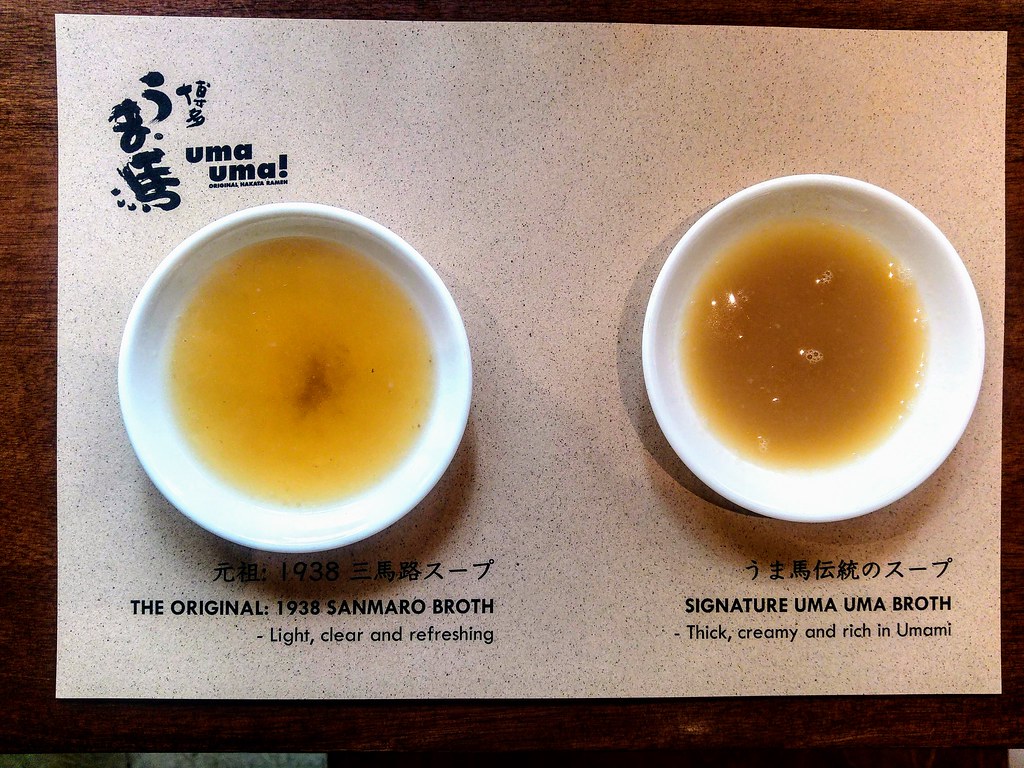 Comparing the broth side by side, The Original 1938 Sanmaro broth can be easily identified by its consistency. Despite it being a rather clear broth, it smells incredibly comforting, like a bowl of chicken soup for the soul as one called it. You just got to draw the bowl close to you and smell it. 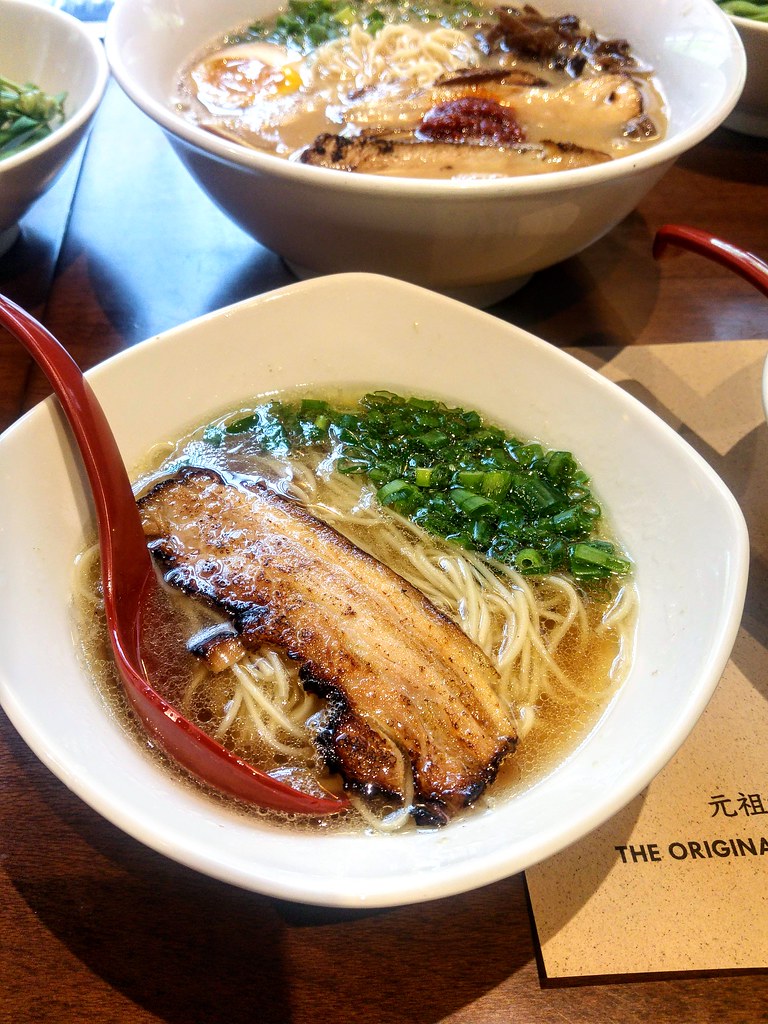 Inspired by Chinese La Mian, Sanmaro is served with chasiu and spring onions only. That allows the subtle flavours of the broth to stand out. Compared to a Tonkatsu broth, this chicken-pork broth is much more well-rounded with a better balance of sweetness and savouriness. I was surprised by how much I enjoyed it. 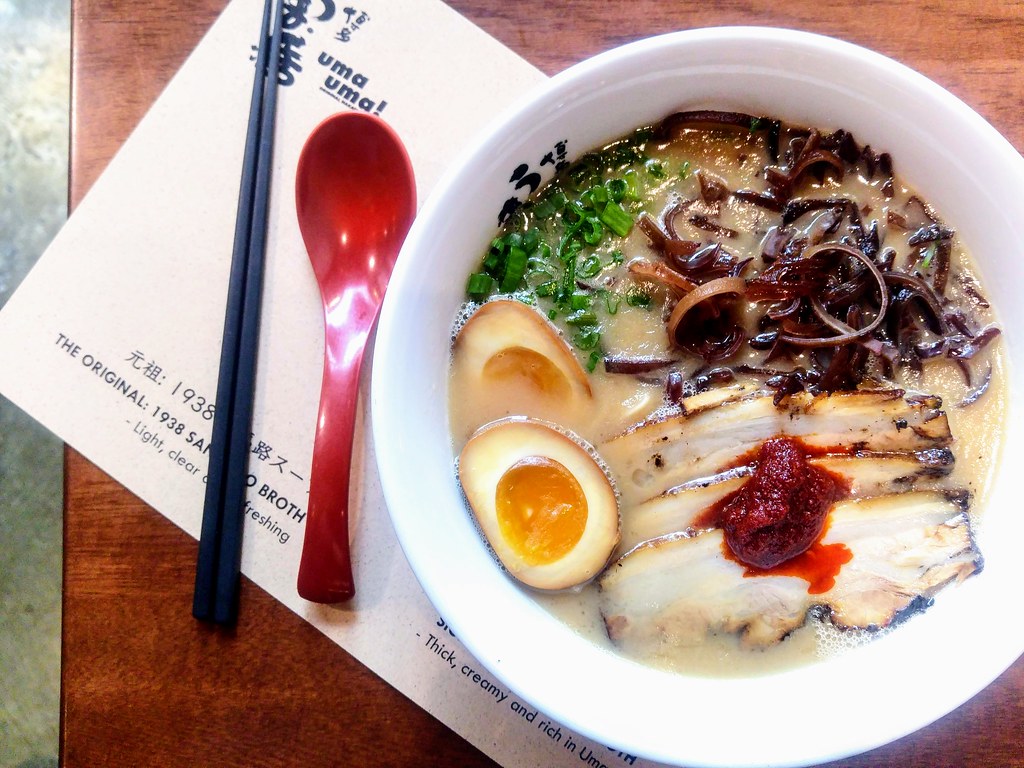 The Signature Uma Uma Ramen was created by Teshima-san. The original thin, white Hakata noodle is used, but a luxury version with more things added for colour, texture and flavour. It is served in a pork broth that has been boiled for over 10 hours. The gelatin-rich broth was satisfying for sure, but I yearn the most after finishing it is the beautifully charred pork belly and the ramen egg. It has been a while since I last had good ones. Most are just average. 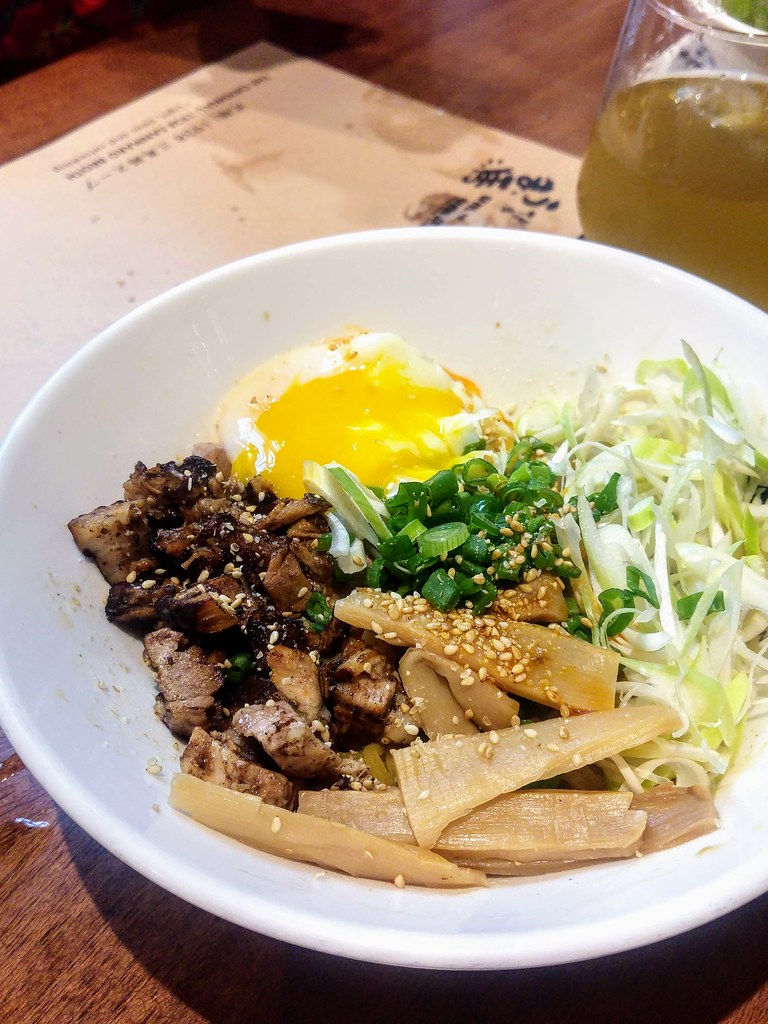 Perhaps it is their charsiu that makes the dry ramen so tasty as well. Uma Uma's BCM inspired Mazesoba Chasiu ($17) was what brought me to their outlet at Forum years ago. Being one of the pioneers in dry ramen, I think theirs is still one of the better ones. If you like springy egg noodles, this will be right up your alley. 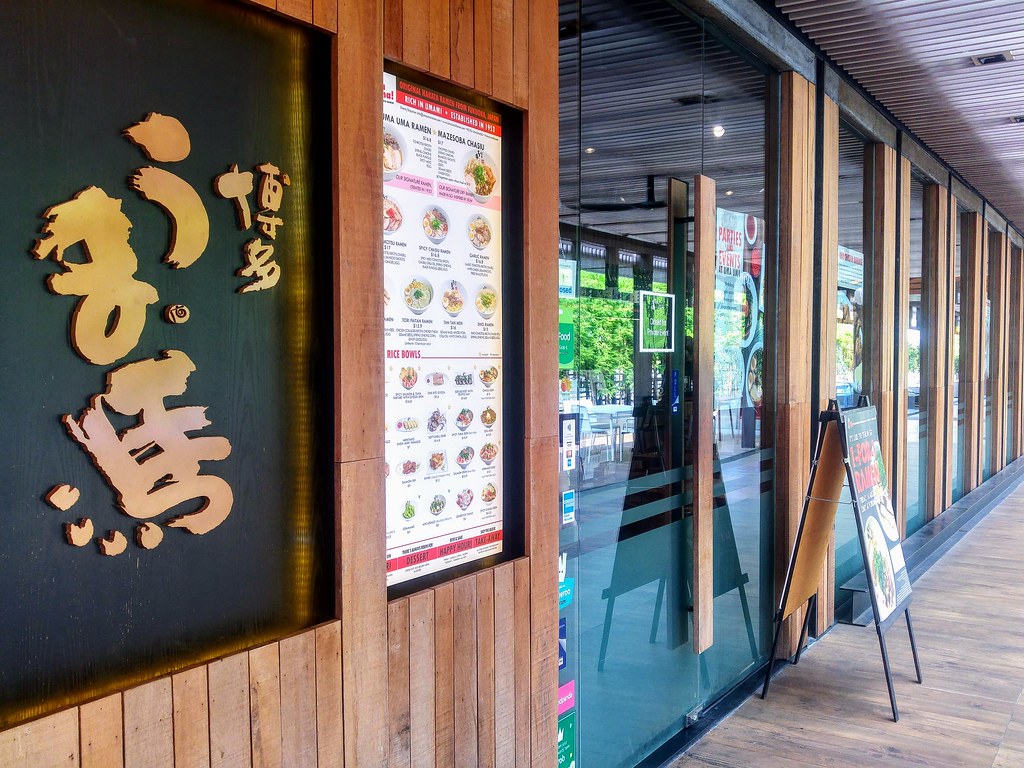 The original Sanmaro ramen will be available for a limited time at Uma Uma Millenia Walk outlet only from 2 September 2019 onwards. In conjunction with the celebration of their 7th year in Singapore, you get to enjoy 1-for-1 ramen at Uma Uma, Forum The Shopping Mall. Choose from all available ramen on the menu, available for 1 day only on 16 August 2019, Friday.

Direction:
1) Alight at Promenade MRT station. Take Exit A or B. Walk to destination. Journey time about 3 minutes. [Map]