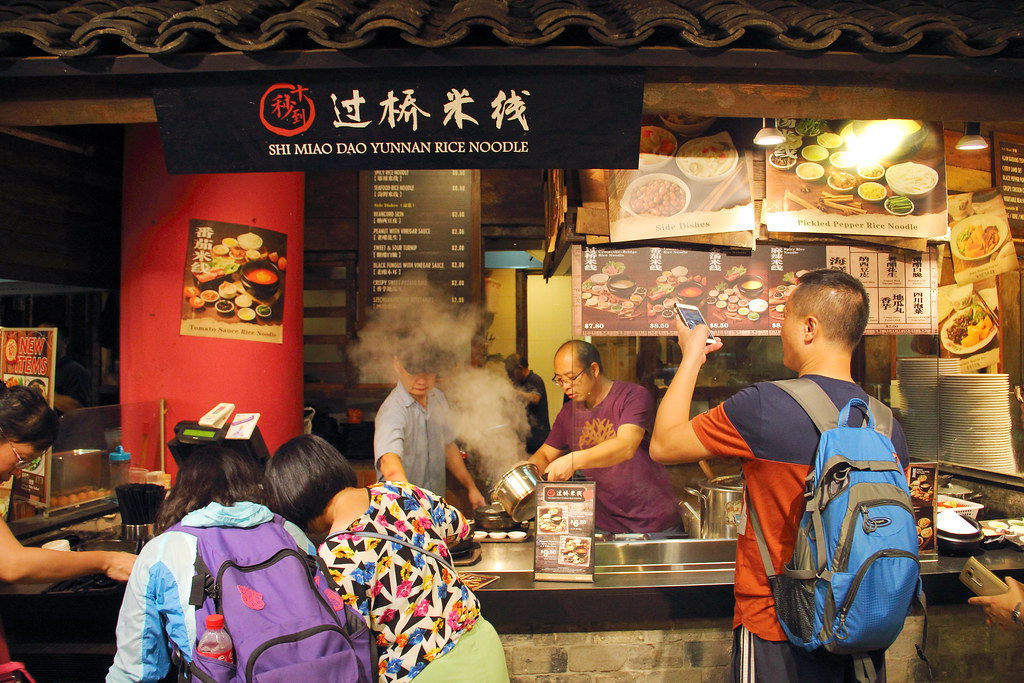 In our food courts and hawker centres, Mala Hotpot is ubiquitous but in China, what's popular is not just that. With over 750 outlets across China, Shi Miao Dao Yunnan Rice Noodles (十秒到过桥米线) is here at Vivocity Food Republic to introduce to you another of their heritage dish from Yunnan - “crossing-the-bridge rice noodles”; where vermicelli and assorted ingredients are tossed into a boiling bowl of soup to cook within 10 seconds, hence the name 十秒到。You get your noodles in 10 seconds. 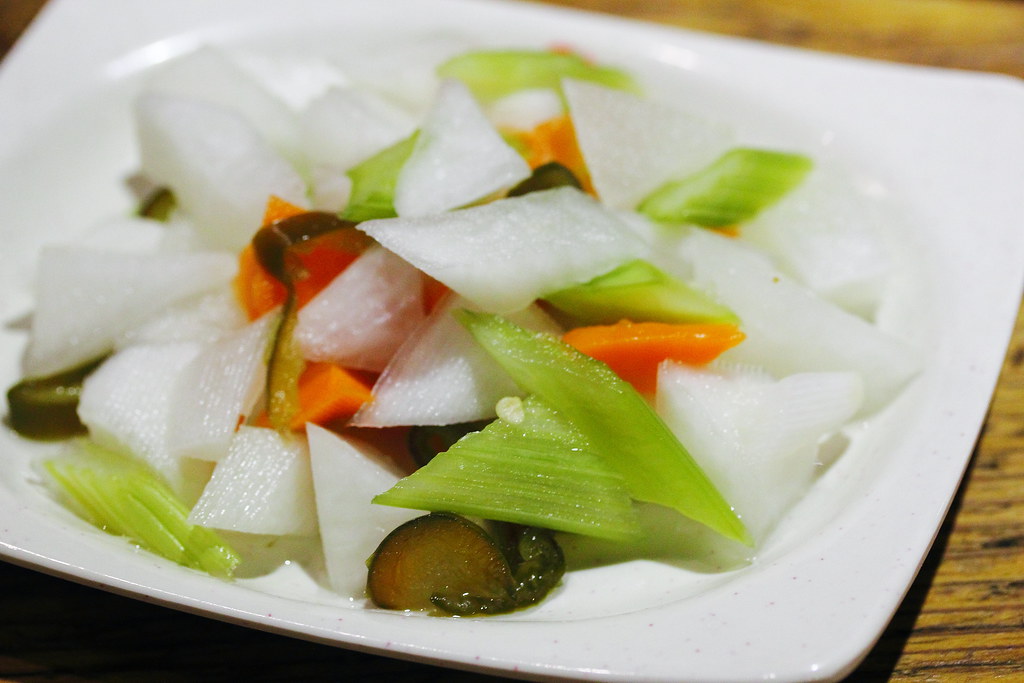 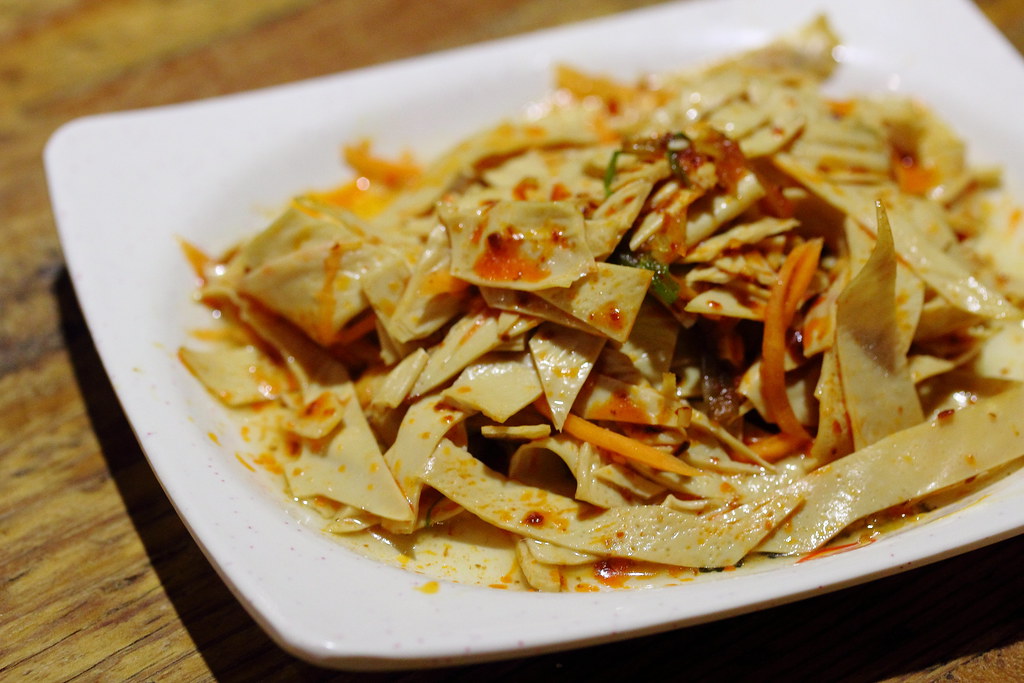 Besides their signature rice noodles, it offers a selections of appetizers on their menu at $2 each. During our visit, we tried some of them such as the Sweet & Sour Radish, Beancurd Skin, Old Vinegar Peanuts and Old Vinegar Black Fungus, 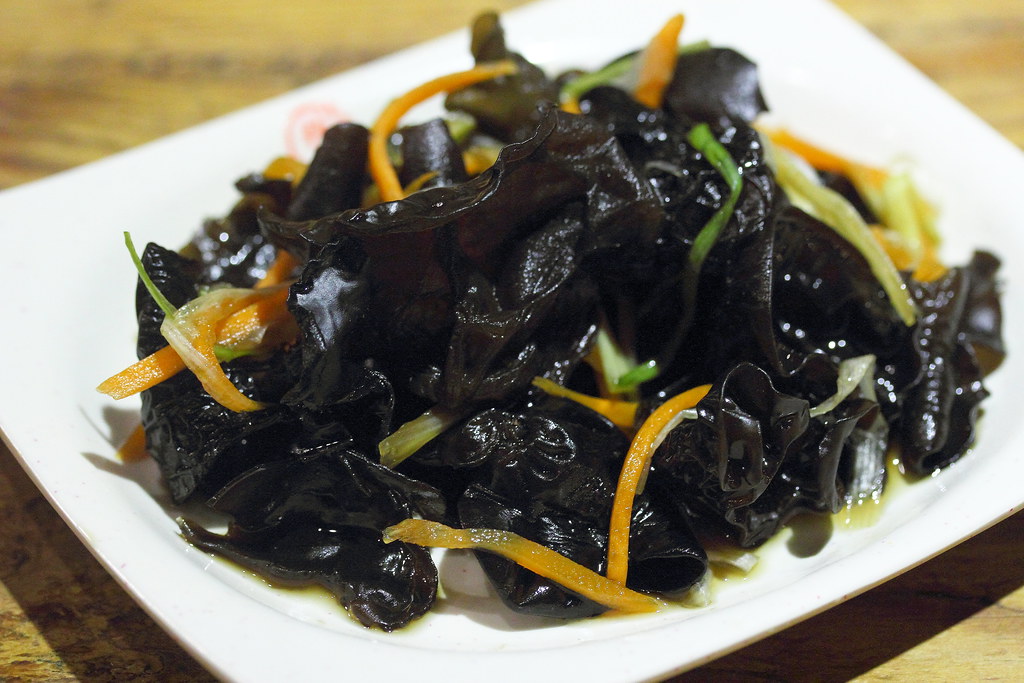 My favourite is the Black Fungus, pickled with their homemade Old Vinegar. The Old Vinegar has a slightly thicken texture which coats the black fungus thinly. Not just a harsh sourness often given by white artificial vinegar, it flavours the crunchy fungus with a tarty wildhoney - like sweetness. For $2, I feel the portion can be more generous, especially when the small plate can't hold much of the puffy flowers. 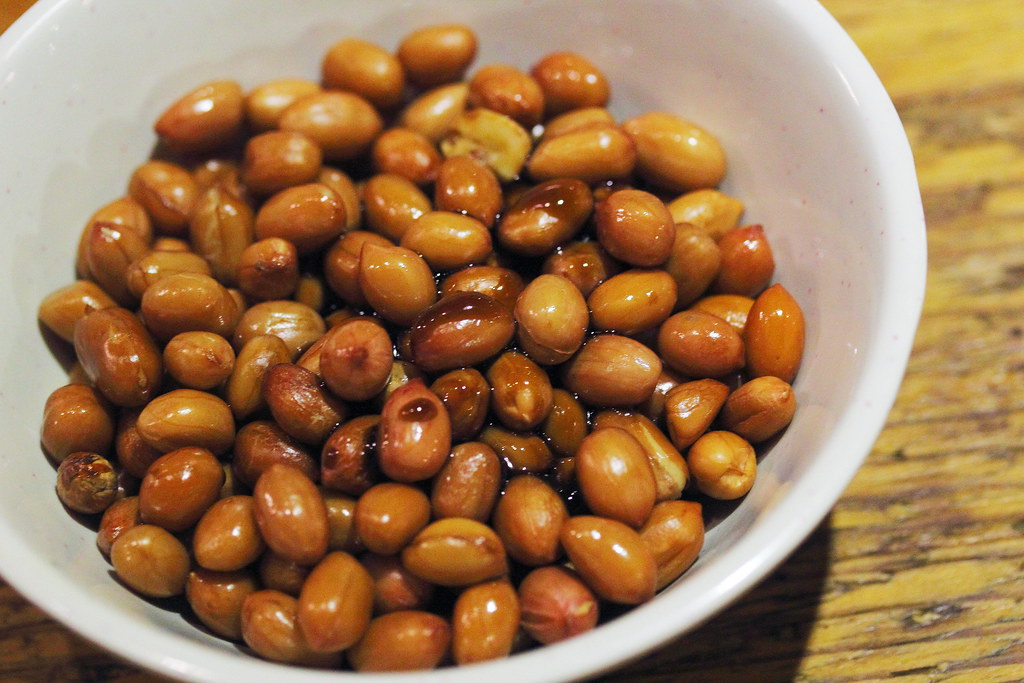 Something new is their crunchy peanuts, which is roasted in-house as well. Not braised but drizzled with the Old Vinegar, the nutty and vinegary taste makes it just as moreish. 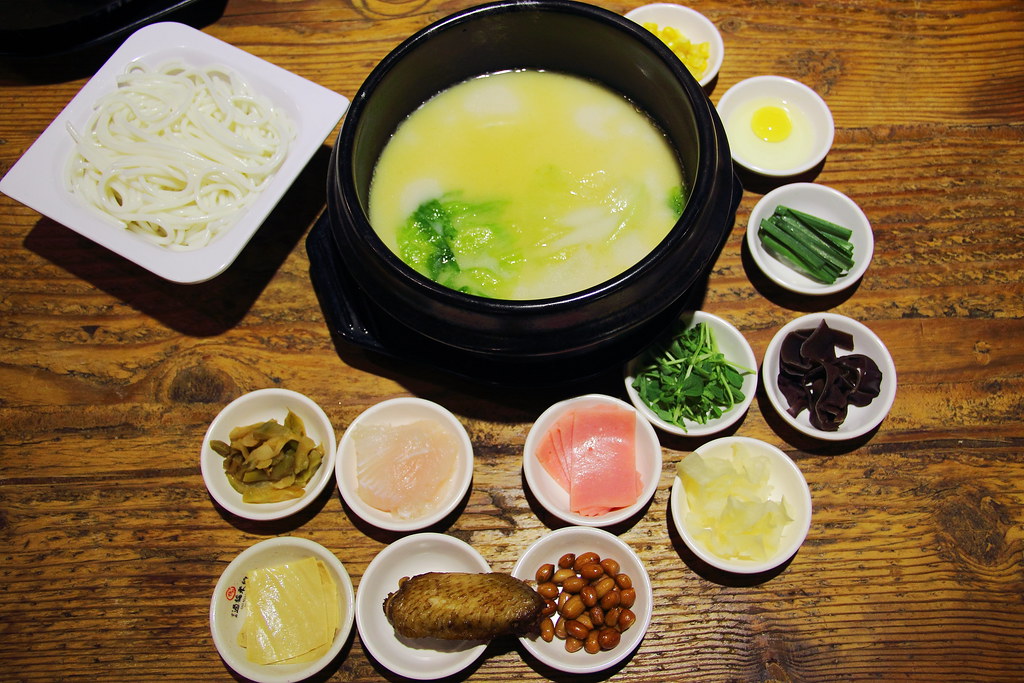 Like a ramen broth, their base stock is made from brewing chicken and pork bones for 6 hours. There are 4 different soup base to choose from for your noodles. If you want a taste of the natural sweetness of the soup, simply order their Original ($7.80) and you get to savour the natural creamy white body of the soup. Noodles should be the last to be thrown into the soup so as to absorb all the flavours from the meat and vegetables. Their special rice noodles is almost as thick as our thick rice noodles but much more silkier and lighter, which is perfect for slurping as there's minimum friction! 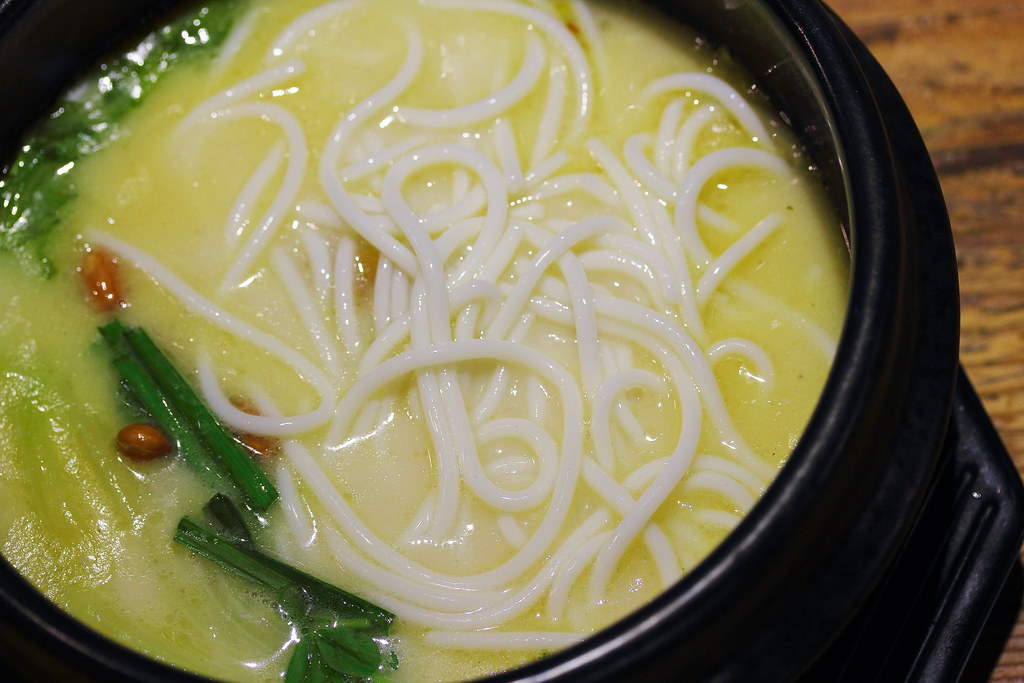 All sets come with the rice noodles, chicken drumlet, quail egg, pork ham, beancurd skin, black fungus, white fungus, corn and assorted vegetables. Seafood option is also available. Additional pork ham and fish slices will be $1 per portion. The lightly braised chicken drumlet adds some weight to the dish which may otherwise be too light for some diners, like a fish soup. The fungus add crunch to the silky noodles, while the corn punctuates the soup with bursts of sweetness. What I don't quite appreciate is the thin slices of rather tasteless ham. In comparison, even the unassuming tiny quail egg seems to add more character to the entire dish. 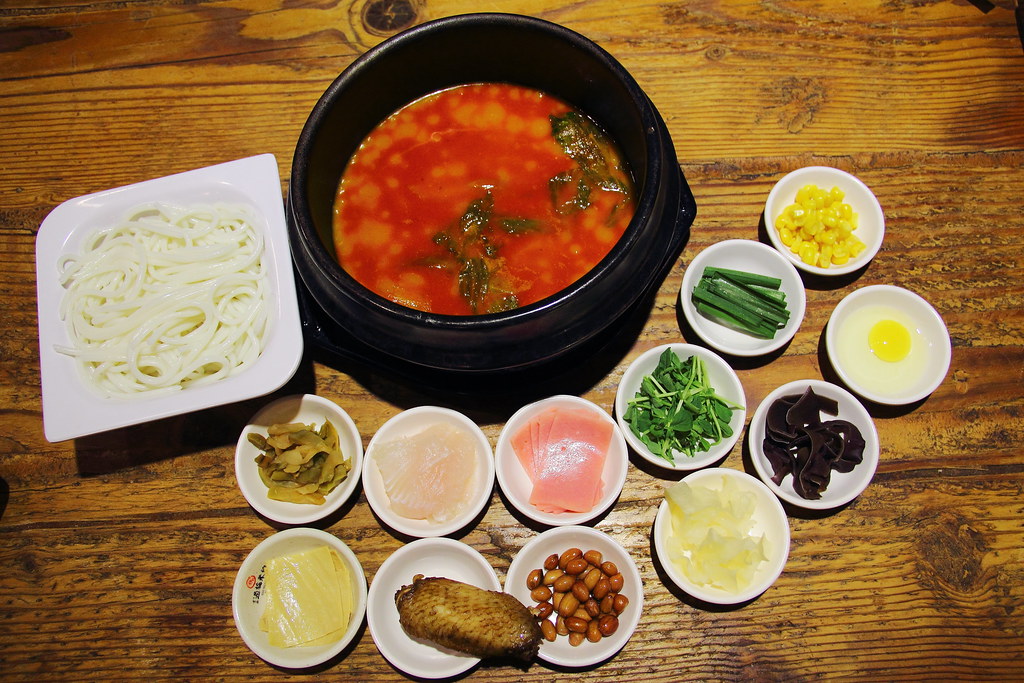 Fortified with fresh, crushed tomatoes, the Tomato Soup ($8.50) is savoury, tangy and richer in taste than the Original. The noodle was also more well flavoured as the slightly thickened soup seemed to coat each strand of the noodles. It could be my favorite potentially if not for the saltiness. 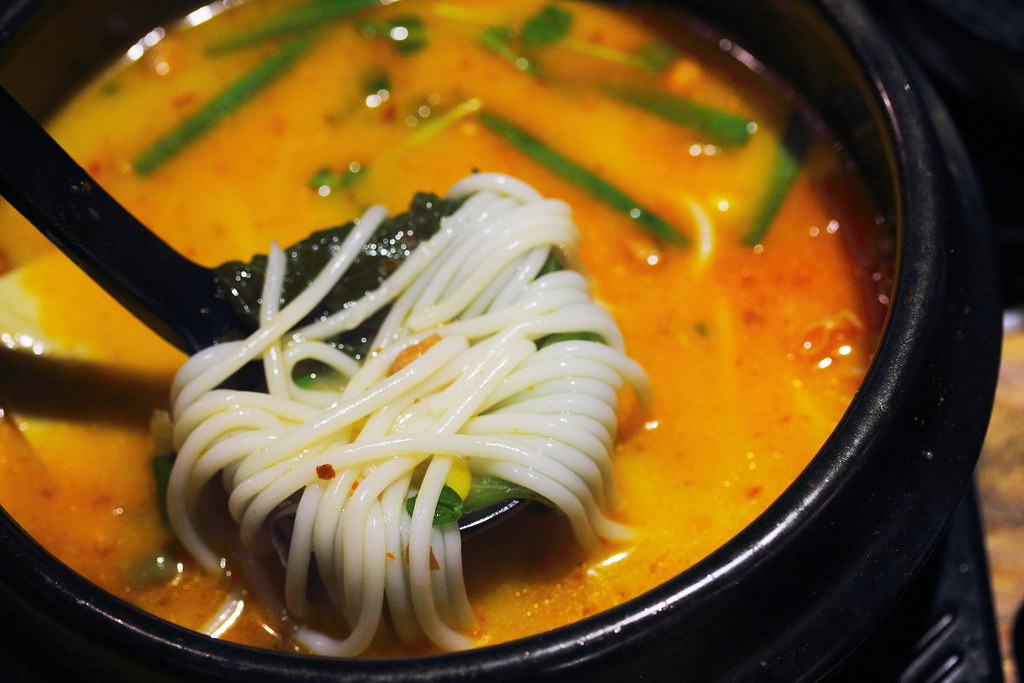 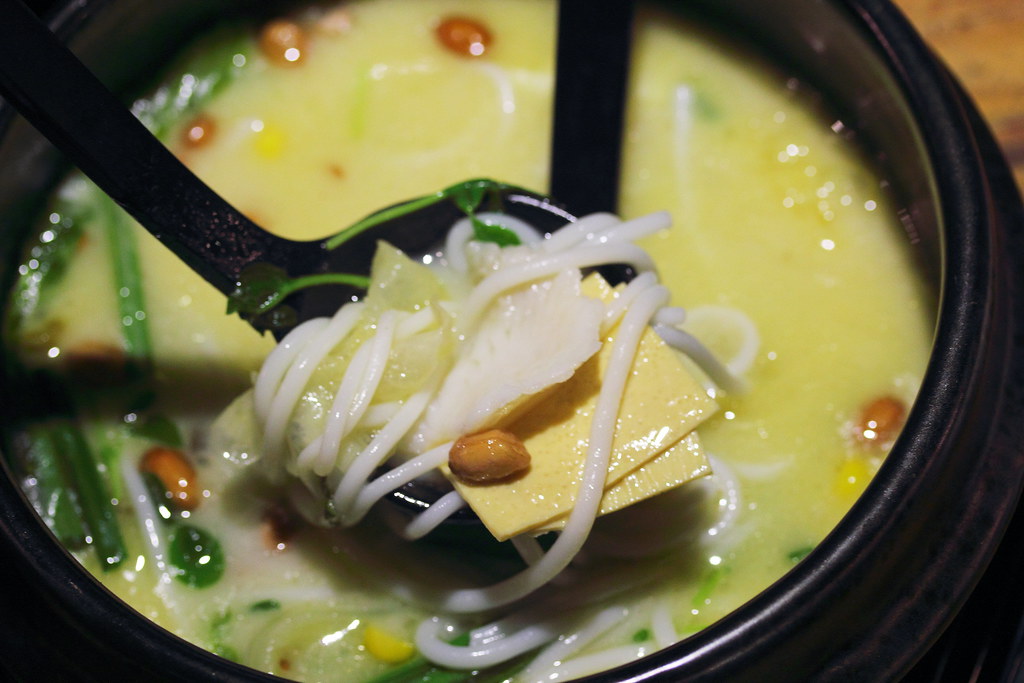 The Mala Soup ($8.50) has 3 levels of spiciness for you to choose from. It carries just a slight aroma of the spices and I find the flavor rather one dimensional, perhaps due to the lack of real spices. If I want something stimulating, I would much prefer the Pickled Cabbage ($8.50) enhanced with finely grated cabbage and green chilli pickled in aged vinegar. The soup is sharp with spiciness but at the same time has the tang and sweetness akin to a pickled Sizhuan vegetable soup. Even if I'm suffering from a cold, my appetite would wake up to this. 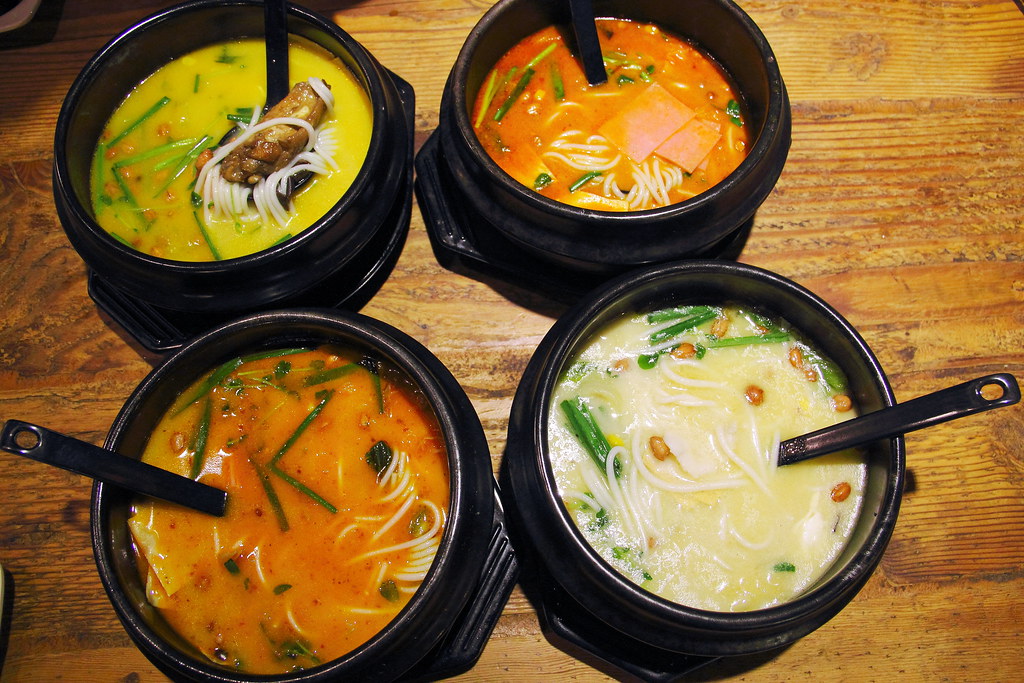 Knowing the story behind this “crossing-the-bridge rice noodles” may deepen your appreciation for it. Legend has it that a woman dutifully crossed a bridge daily to an island to bring to her husband his mid day meal while he studied for his imperial exams. Earthen pot was used to keep his meal hot and fresh which she filled it with boiling broth and added in the noodles and other ingredients to cook only when he was ready to eat. If you want to have a taste of this legendary noodles, just come down to the Food Republic at Vivocity.