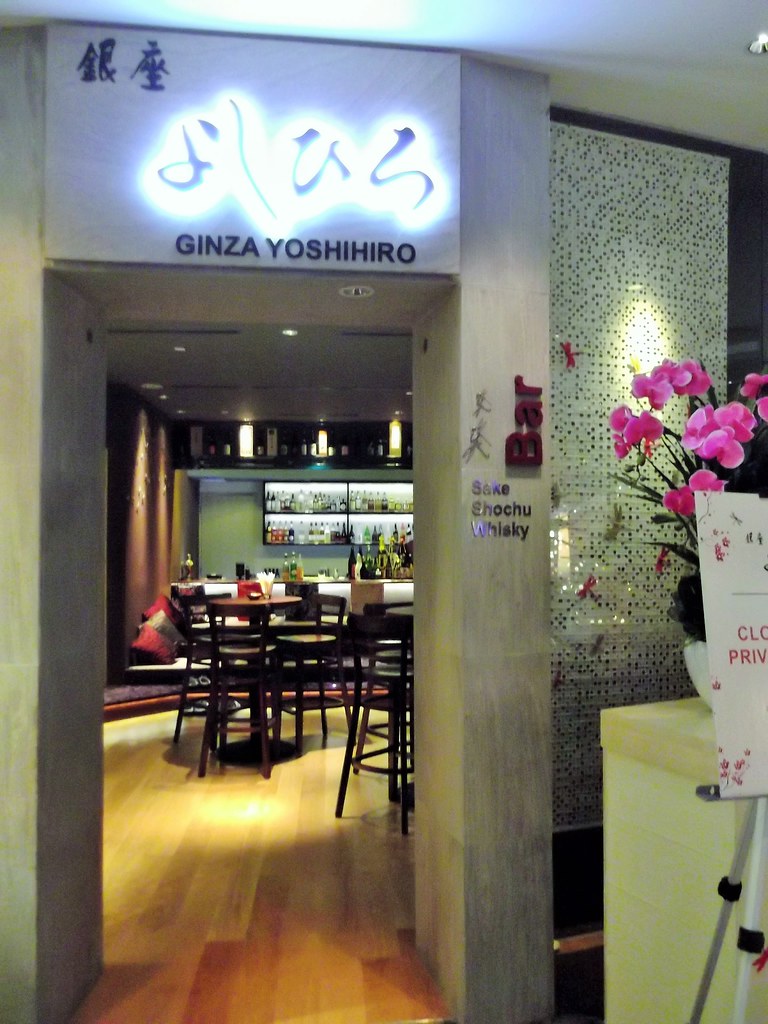 Ginza Yoshihiro Singapore, located at Marina Mandarin Hotel, is a place that exploits the natural synergies between traditional Japanese cuisine and Japanese drinks - whisky, soju and of course, sake. Ginza Yoshihiro has brought its 30 years of heritage in Japanese cuisine all the way from Tokyo to our little island, where sake and soju bars are getting more nods than ever before. Their signature is Oden that comes with their homemade soup, which is of a unique Yoshihiro’s flavour created with exclusively selected ingredients. With the second generation at its helm, Chef Nishioka is now the main chef in Ginza Yoshihiro Singapore, with his younger brother running the restaurant back in Tokyo. 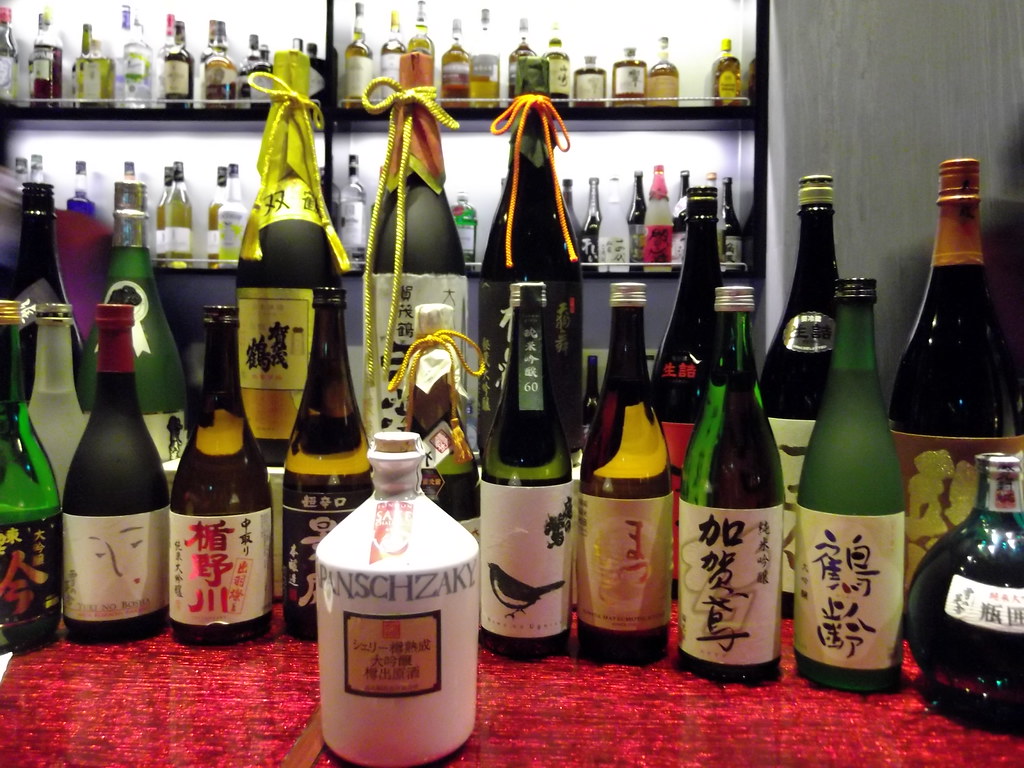 A whisky, sake and soju Bar front the restaurant. Bottles of sake and soju (directly from Japan which are not distributed in Singapore), as well as their extensive range of Japanese whisky, forms the backdrop of the bar. It is an enjoyment, to be seated at the low bar counter on the tatami platform, and watched the bartenders deeply absorbed in the making of their special cocktails for the guests tonight. The overall atmosphere is still kept rather vibrant as a hipster bar, with the background music and the usual high stools and tables surrounding it. On the other hand, the minimalistic dining area reflects its identity as a fine Japanese dining. Their menu is pretty simple but it covers the quintessential - Donburi, Oden, Tempura, sukiyaki and sushi gozen. There are 3 different sets of Omakase to choose from - Oden Gozen ($128++), Kikyou ($158++) and Botan ($188++). 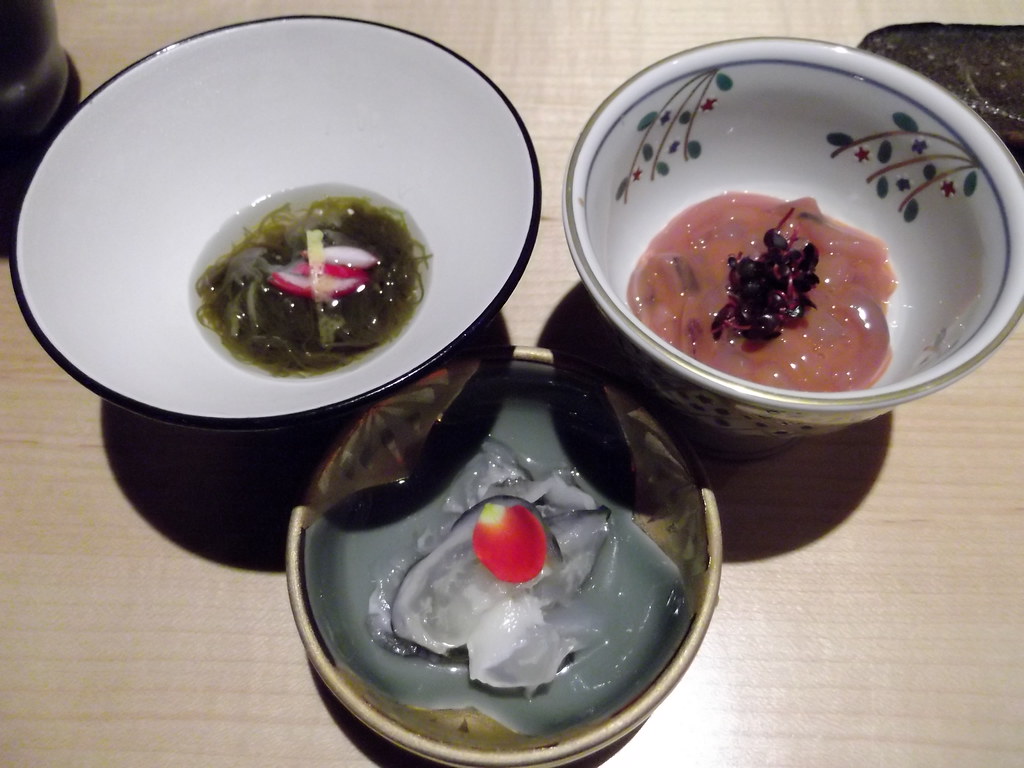 A few sips of their cocktail Yuzumoshu Borendo ($15.50++) could be one of the best ways to refresh your senses before dinner. we got to try a few items on the Kikyou set. The appetizers were more towards the tangy side. I caught a tinge of yuzu in the Seaweed appetizer. In particular, I like the Salmon Head Slices as they were very crunchy, and most importantly, full of collagen! 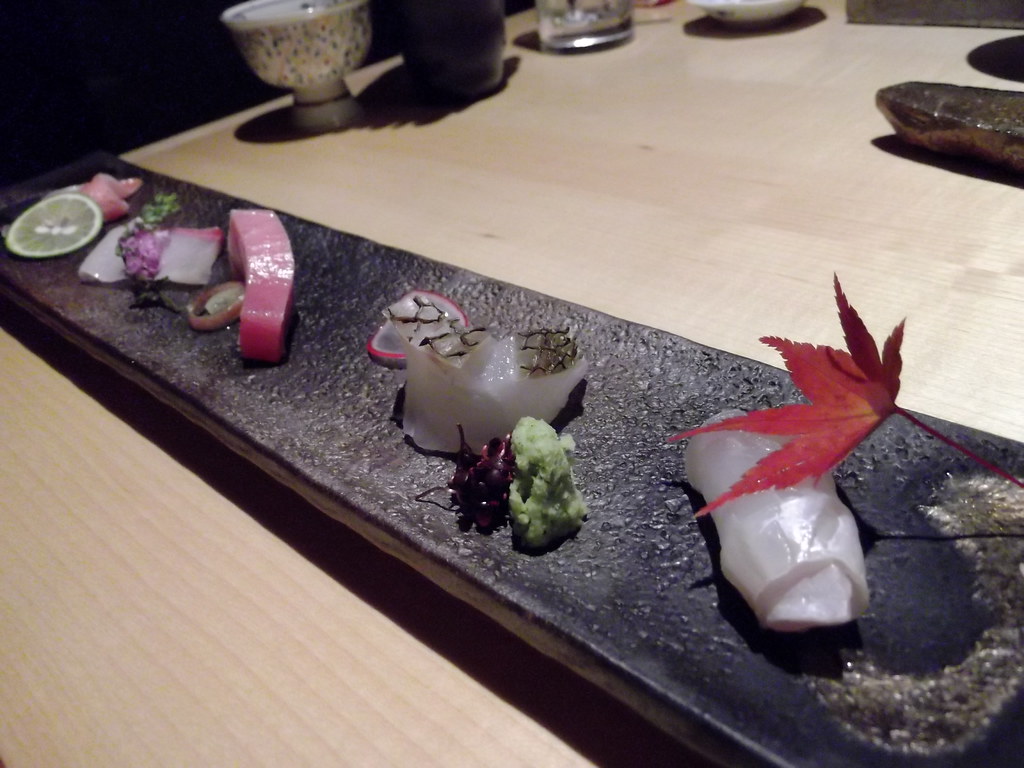 The beautiful plating of the Sashimi was somewhat mesmerising, and certainly necessary for such premium quality. I love the freshly grated wasabi, which lends a touch of herbaceous flavour to the sashimi without the intensity found in fake wasabi. 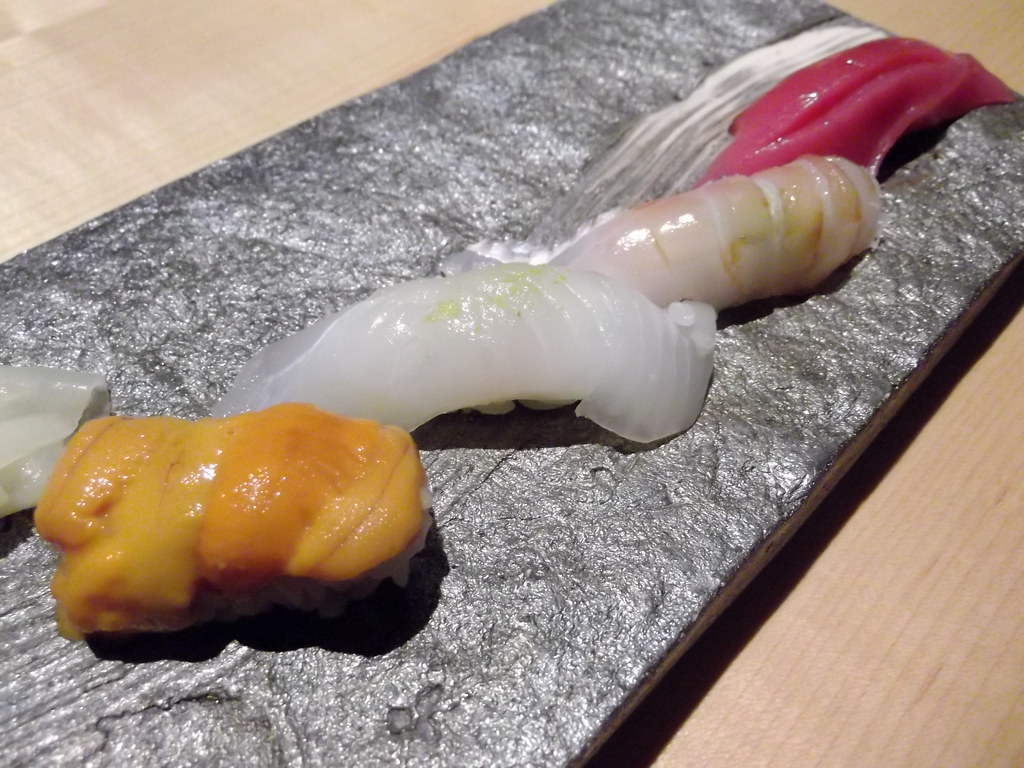 The Nigiri Sushi came to me, shimmering in the light. Out of the 4 sushi created for us, the Hirame stimulated by a dash of yuzu stands out the most. 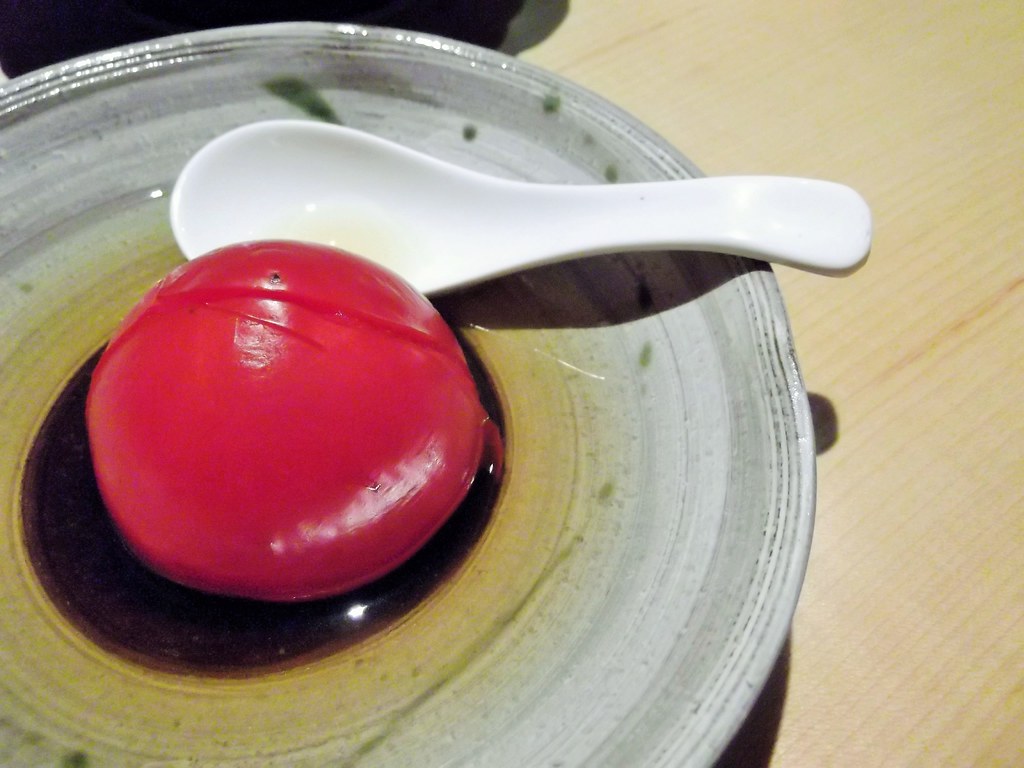 Momotaro Tomato Oden is certainly one of its kind. Not very common to find tomatoes as the lead in a dish. The only one in my repertoire is the Tomato Ramen by Tonkotsu Kazan Ramen. The light-taste soup has a certain depth to it, which come across even more comforting after a few rounds of drinks. 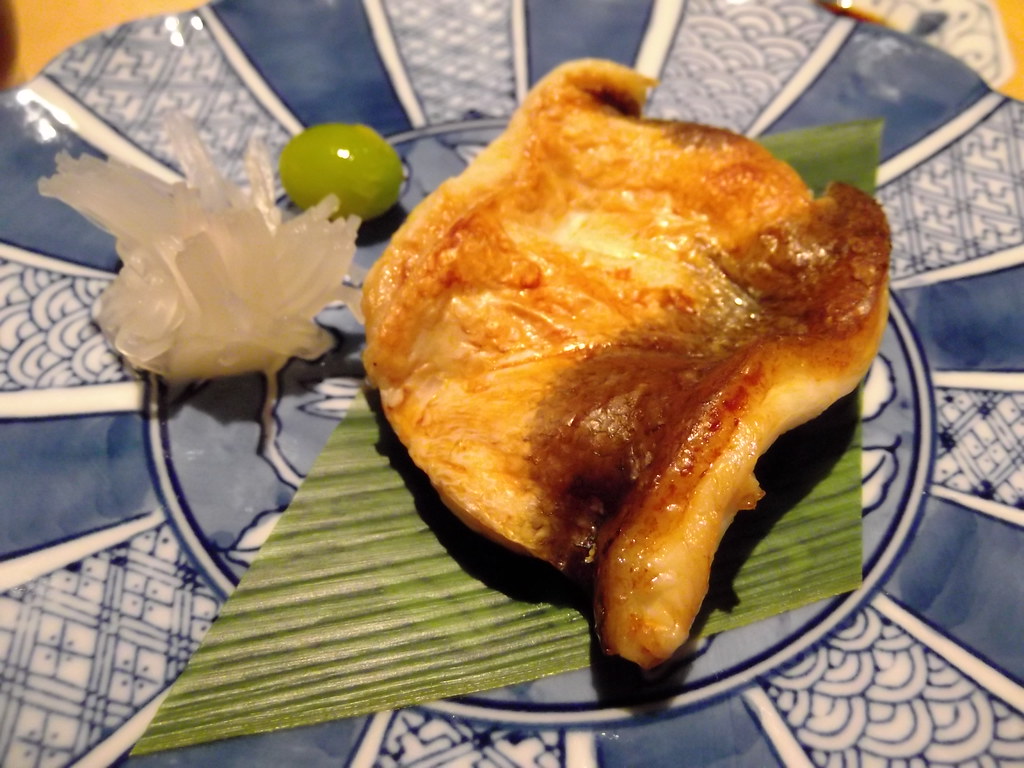 As for yakimono, we have had fish as well. Beautifully grilled, but I find the texture a little too dry for me. 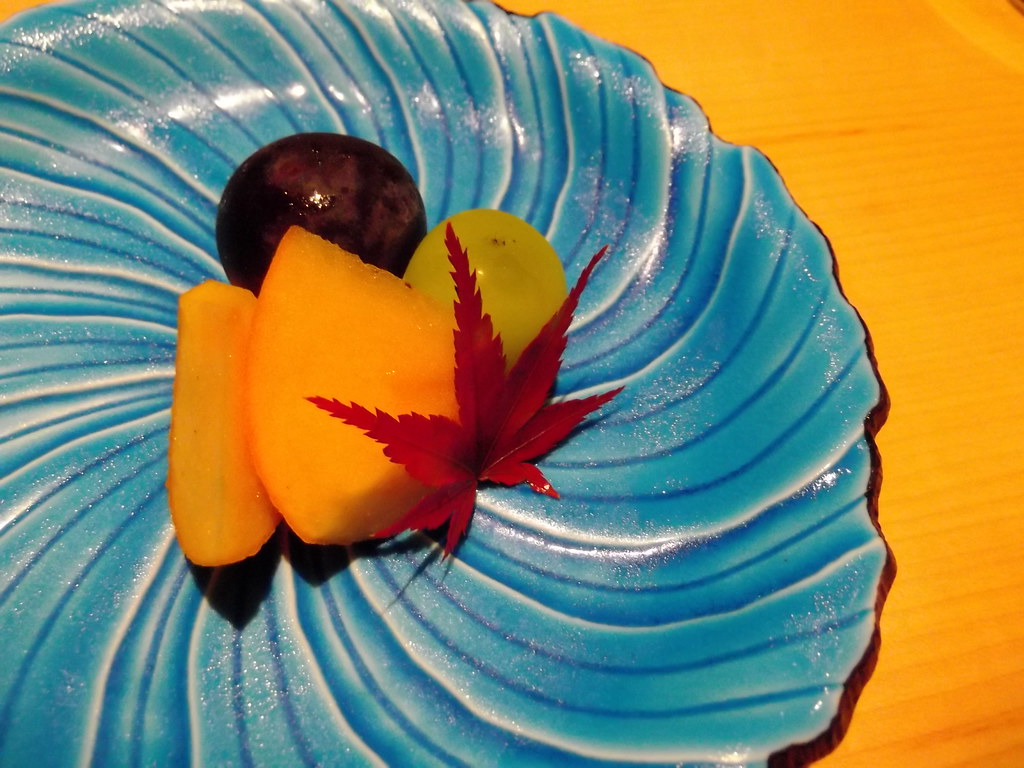 Dessert, as simple it looks- Persimmon and Grapes, the taste was amazing. Now I do see why some people are willing to splurge on their fruits.

A strategic partnership indeed. The coexistence of these two traditions help in creating a much stronger brand name and wider appeal. There is no denying to the originality of the traditional Japanese cuisine here for sure, although I wish it can be as spectacular as its sake soju bar. Likewise for the latter, I wish it can be slightly more Japanese accented. Perhaps the presence of a Sake sommelier might help? However, to be fair, this is just its first month into business! So some fine tuning is expected.

Photograph and Written By Si An. A girl who is allured by travelling, loves the feel of freedom, smell of the rain and the aroma of fine coffee and food.

Direction:
1) Alight at Esplanade MRT station. Take exit B. Walk to Marina Square via Marina Square Link. Walk to the destination. Journey time about 8 mins.[Map]
Posted by DerrickTan at 11:30 PM