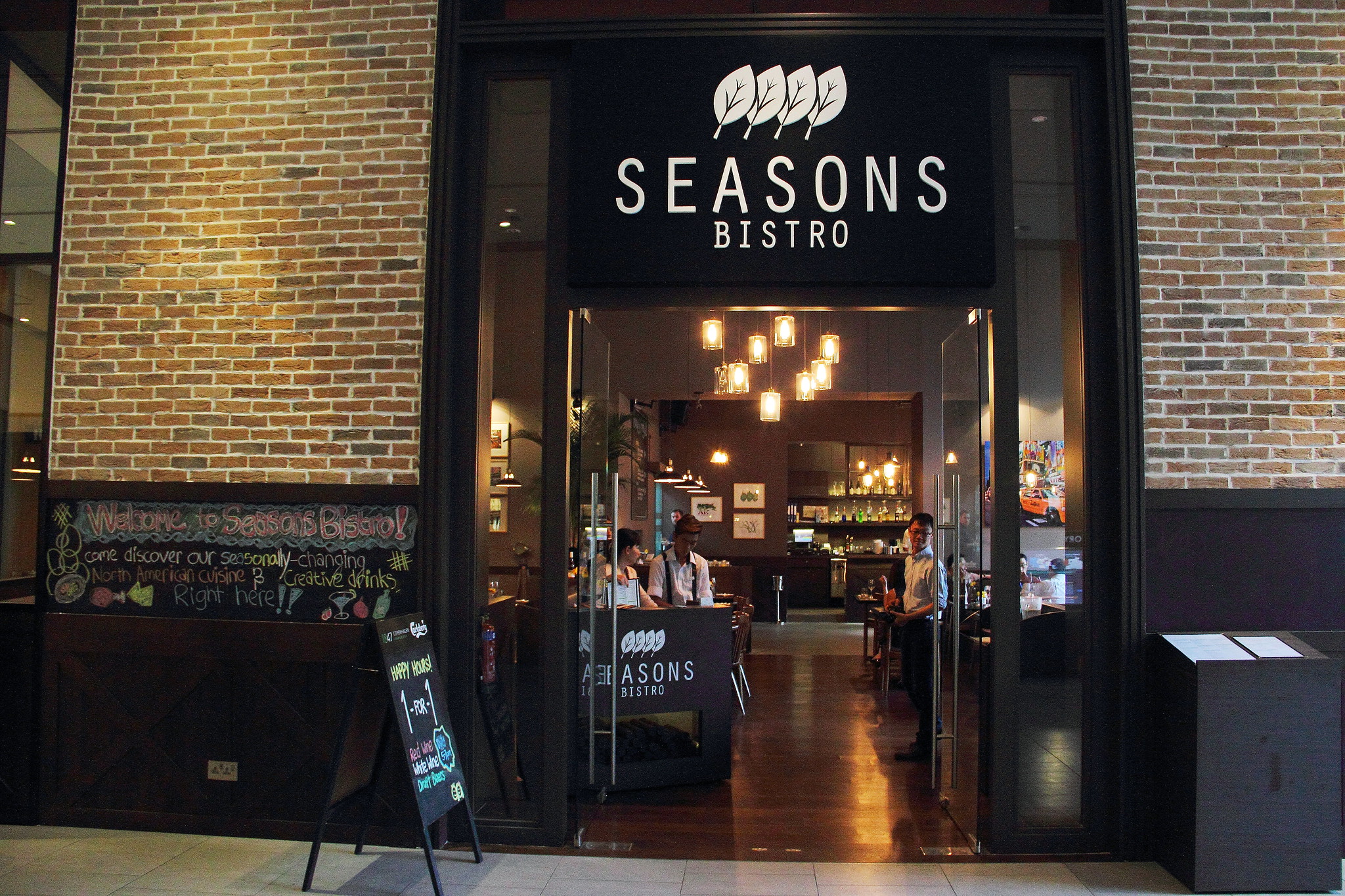 Seasonal eating is rare in Singapore, I would say. Living near the equator where there is only rain or shine, we are naturally not inspired by seasonal produces. That, however, is the philosophy behind Seasons Bistro.

Seasons Bistro set foot in Triple One Somerset in May 2014. The founders believe that eating by the season is not just about taking advantages of the seasonal produces - better flavours and lower cost, it also contributes to sustaining our Mother Earth. Inspired by Executive Chef Benjamin Fong's travels in America, the menu offers a range of dishes that speak the diverse characteristics of the different regions across the continent - from New England to Southwest. American craft beers from independent breweries in United States are also being brought in for an even more authentic experience. 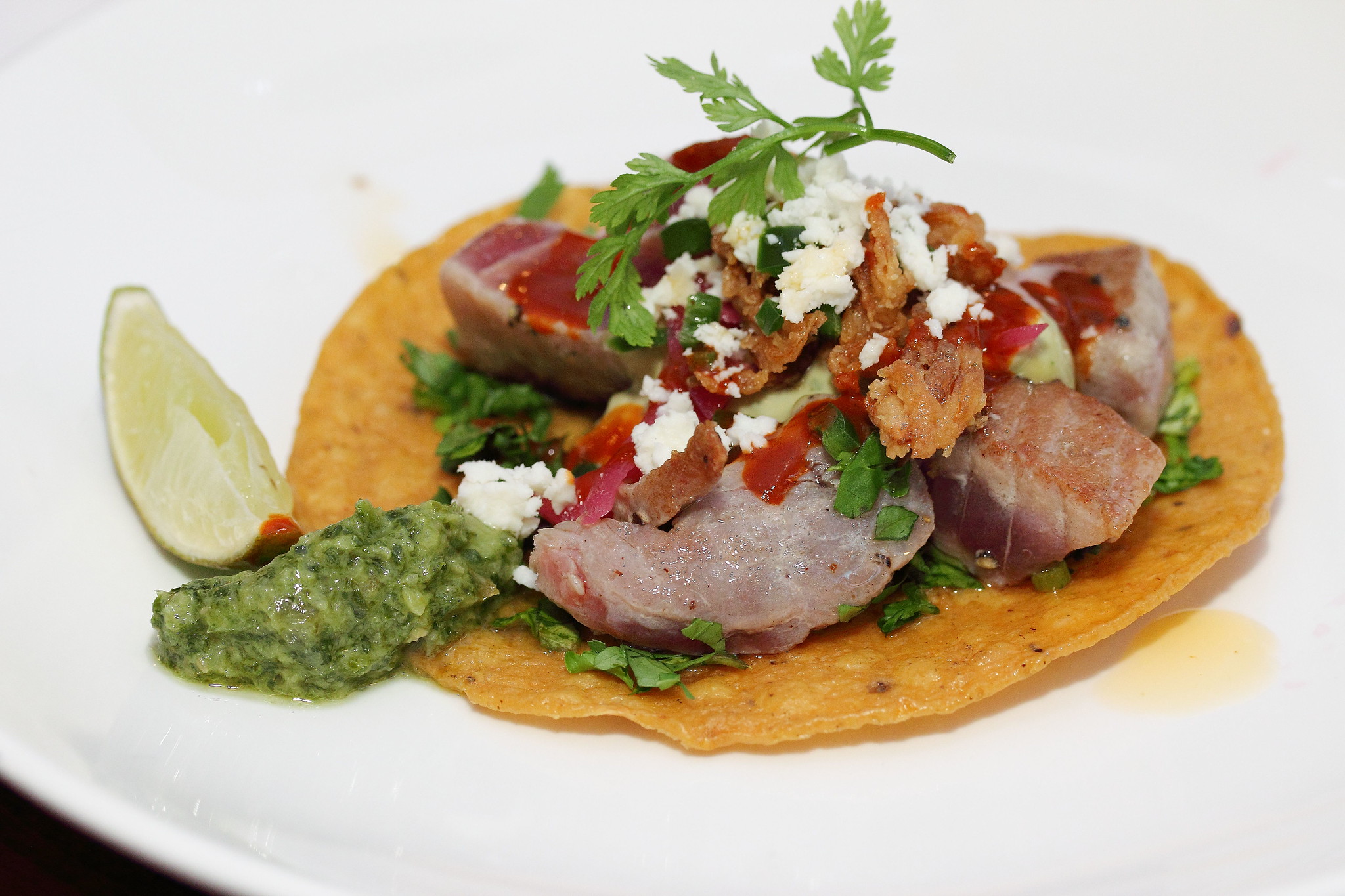 We began our journey across the continent with Seared Yellowfin Tuna Taco ($14). Marooned on a tortilla shell, the pinkish tuna was accompanied by Avocado mayonnaise, pickled onions, crispy shallots, cotija cheese, and cilantro jalapeno watercress salad. I love the way the chef played with different flavours and textures. The tortilla snapped readily as I bit onto the tender seared tuna, which was well flavoured by its accompaniments. Under the work of the creamy mayonnaise, all the different elements fused together and glided down my throat effortlessly. With the generous serving of tuna chunks, I certainly don't mind having a couple more as a main... 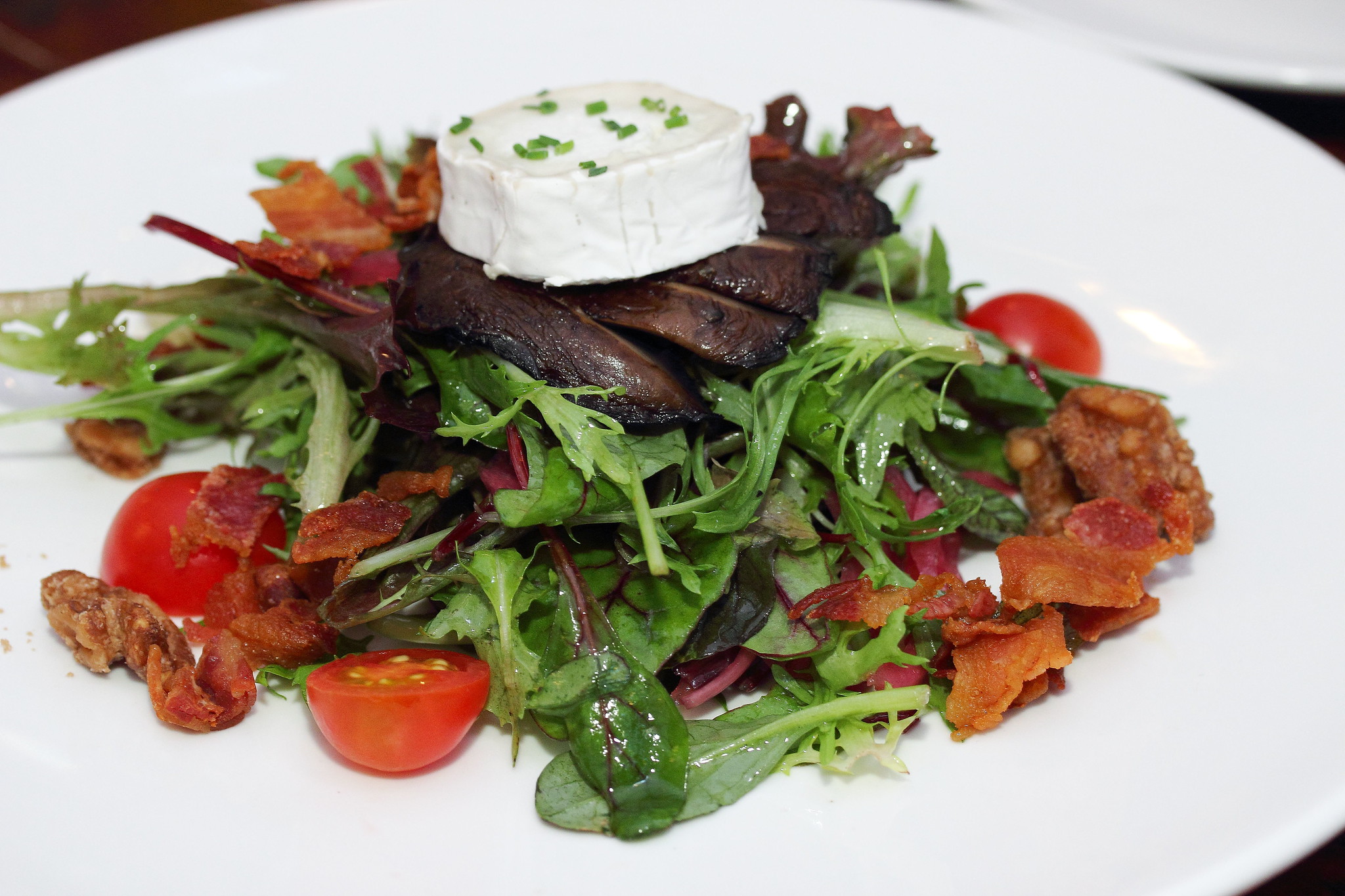 The Grilled Portobello Salad ($16) shared a similar treatment. With the whole Portobello in the centre, an array of ingredients were summoned- St Maure Terroir, tomatoes, beans, candied walnuts, pickled onions, and bacon crisp. The candied walnuts sweetened the bold St Maure Terroir with strength, creating a fine balance of flavours. However, I felt that the use of goat cheese was not an apt choice for this salad. Because of its distinctive flavour, it overpowered the Portobello. More candied walnuts could potentially be the saving grace. 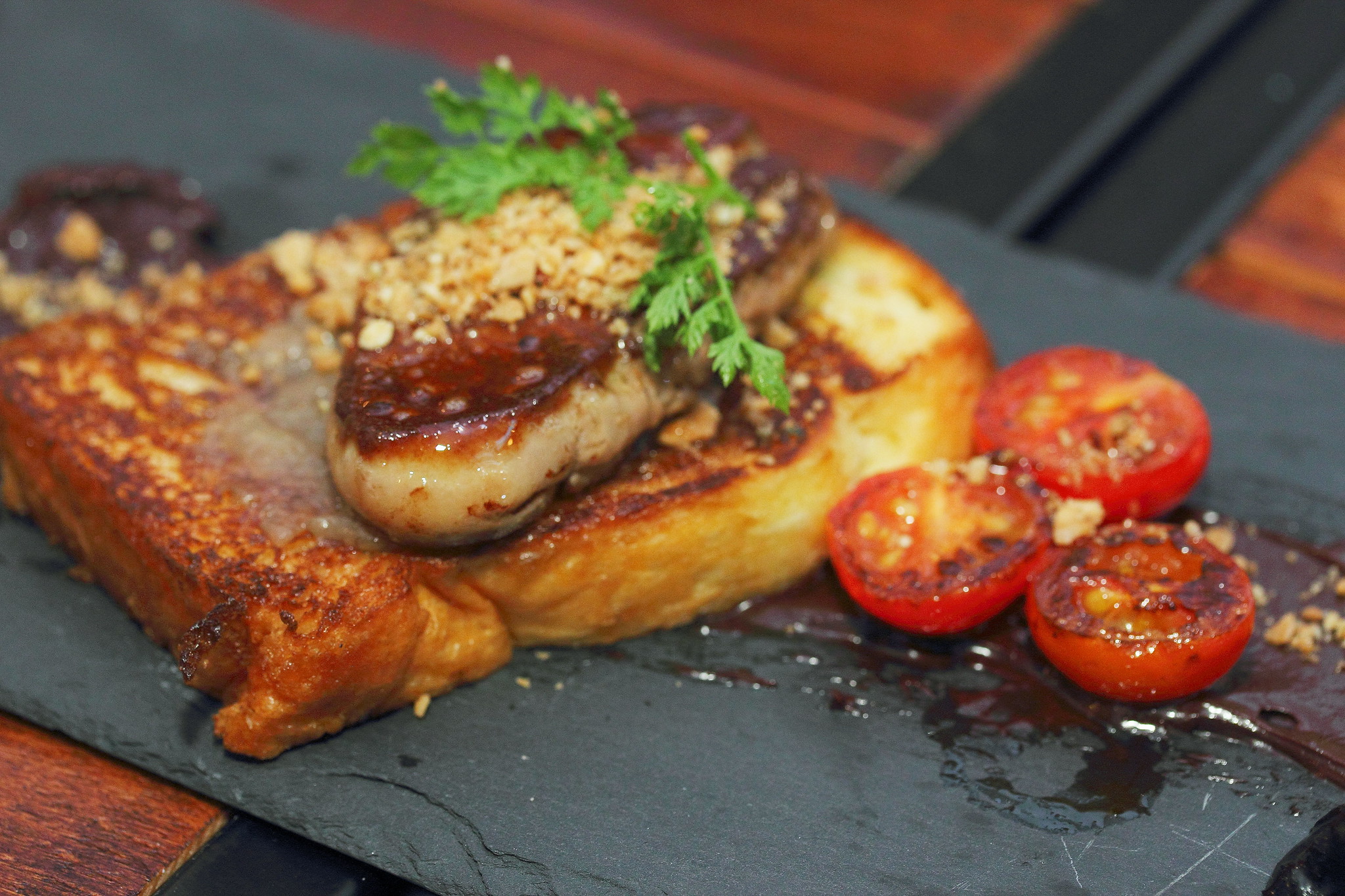 Pan Seared Foie Gras ($16) is what I would call a premium breakfast. Imagine a pain de mie with caramelised bananas spread and a piece of butter on top, spiked with granola crumbs and drizzled with chocolate ganache. But switch the butter with foie gras. That was what came to my mind when I took the first bite. The foie gras melted gracefully in my mouth. Coupled with the salty jab from the bacon jam, this dish is a must-try for the adventurous taste buds. 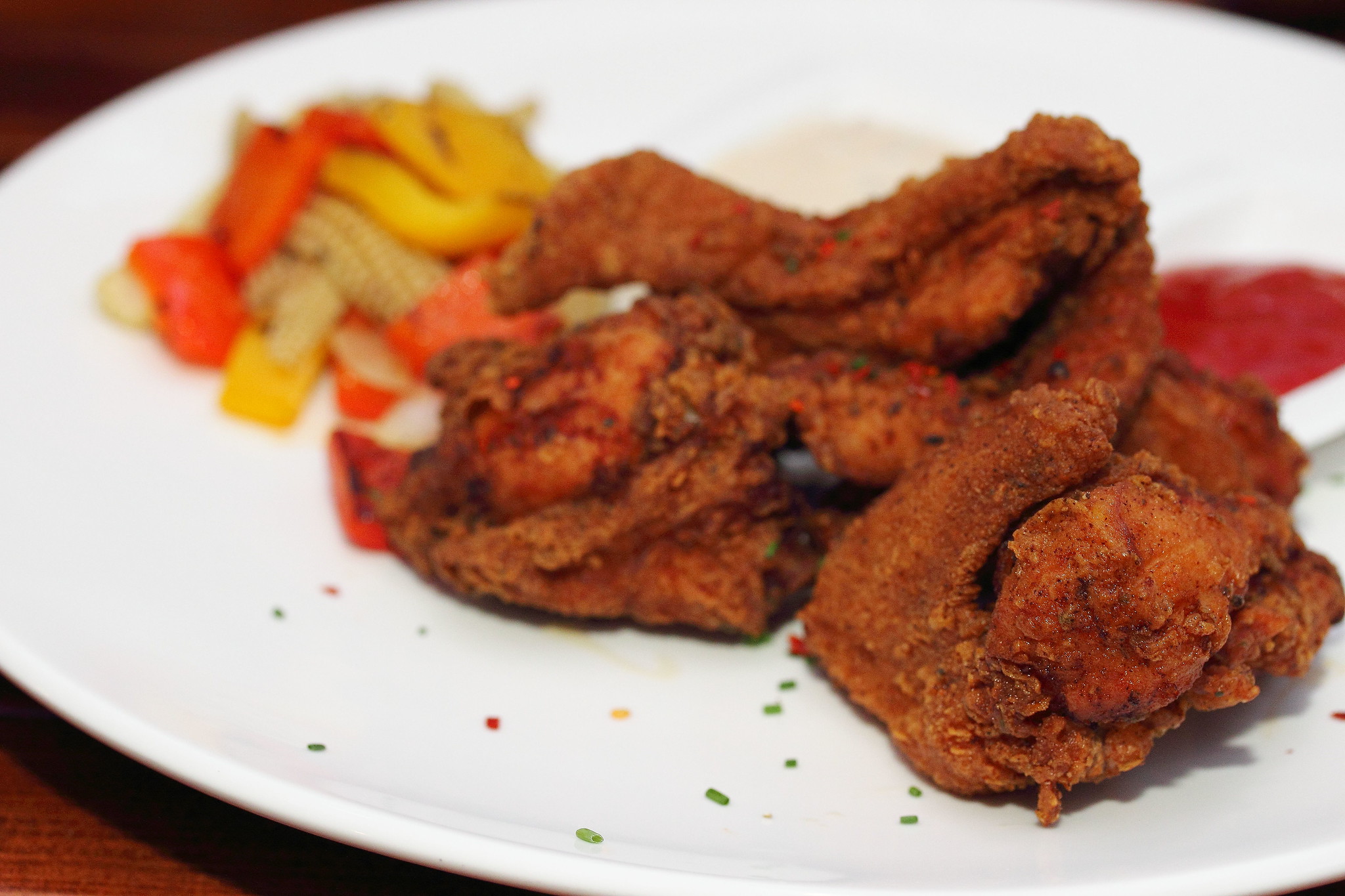 The Buttermilk Fried Chicken ($22) met our expectations - crispy skin and tender meat. But what I thought was worth commenting is their dips. Nothing beats homemade. If you are ordering this dish, do try to appreciate the difference in their homemade ketchup. It leaves your tongue clean. 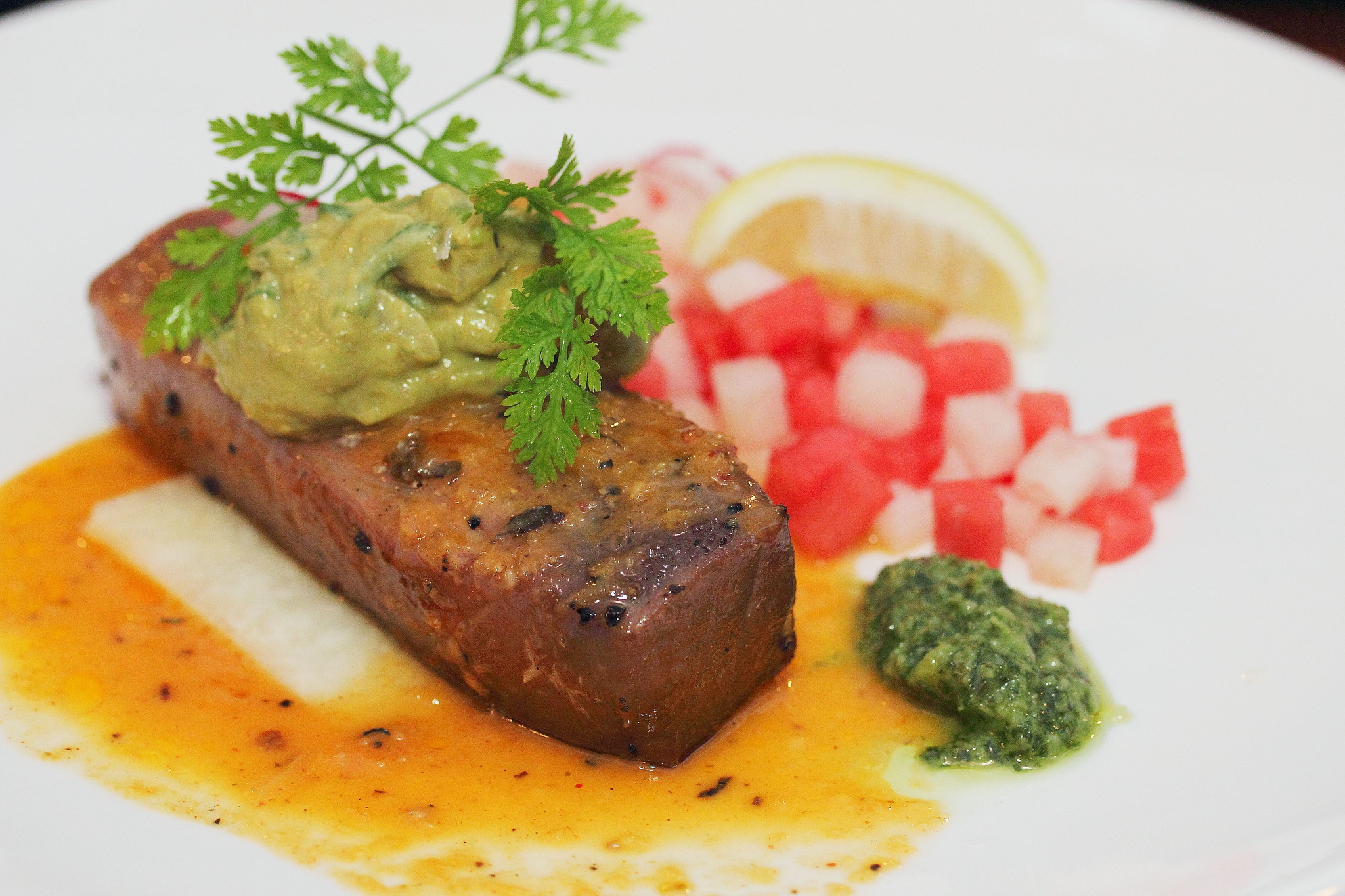 The dish that I really looked forward to is one of my all time favourites - Seared Albacore Tuna ($26). To preserve the taste of this delicate seafood, it is a kind of dish that I feel should be served as simply as possible. Tonight, this dish did not disappoint. Although I felt that the fish was slightly overdone, the avocado puree creamed the meat really well. At some point, the meat fell apart readily and seemingly melted in my mouth. I really like its fruity companions - Asian pear, jicama, watermelon with chipotle mojo and salsa verde. They were so refreshing, I believe this dish is a ladies' pleaser. 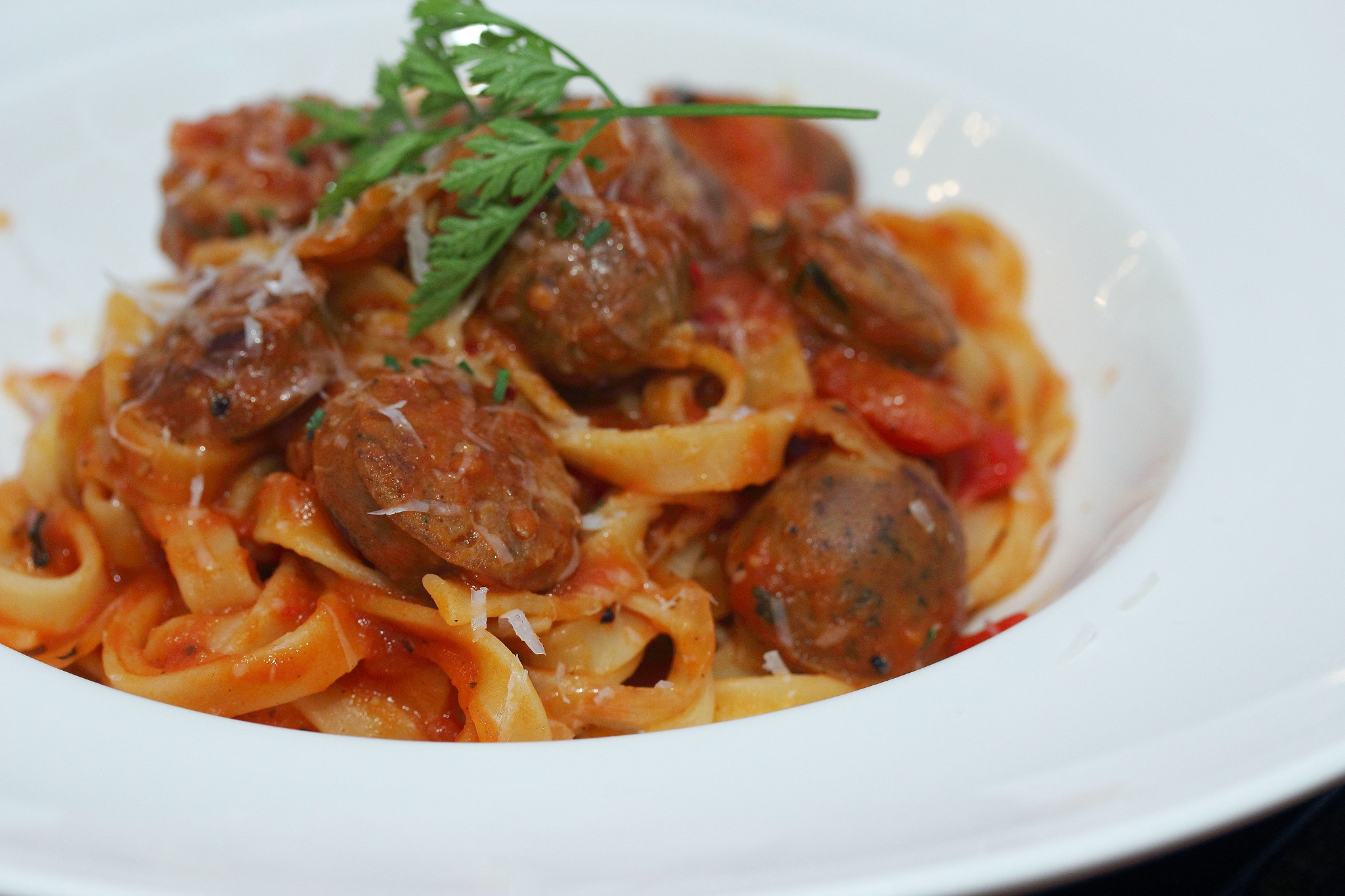 A stir of the Tagliatelle immediately released the uplifting aroma of the fresh herbs and spices - fennel, basil and chili. When I do not usually associate pastas as a Summer dish, Chef Benjamin subverted my expectation by creating the Southend Summer Pasta ($18). Prepared using homemade tomato sauce with chunky sausages, this dish was appetising and moreish. It was balanced in almost every way. At my first bite, I could taste the natural tanginess and sweetness of the homemade tomato sauce. The pasta was done al dente and the sausage chunks was not overly seasoned like many others. 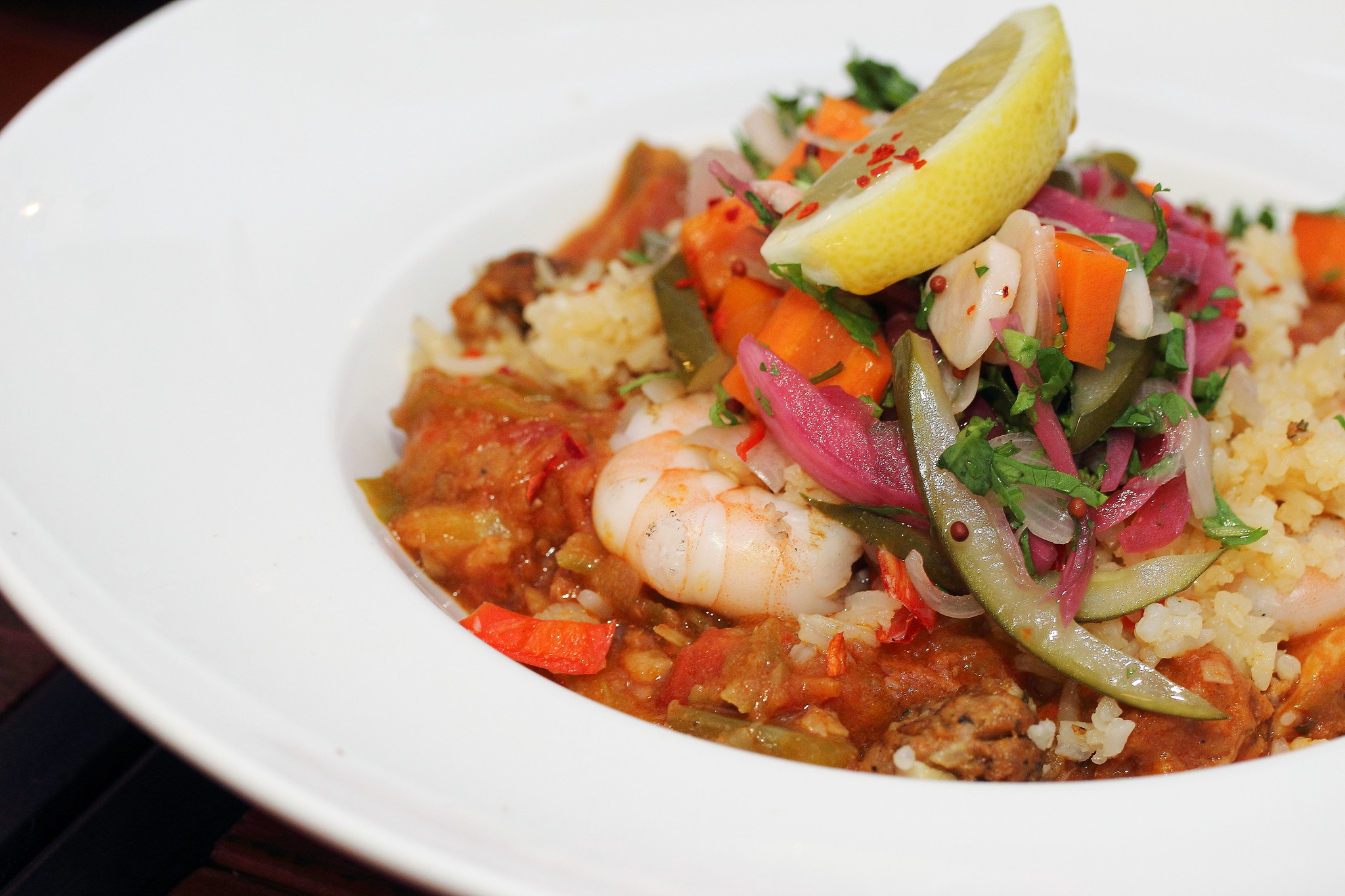 Surf& Turf Gumbo ($27) comes with a grain by the name of "dirty rice". As unappetising as it may sound, it is actually quite a tasty Cajun dish. This dish was traditionally cooked with white rice mixed with small pieces of chicken liver or giblets, green bell pepper, celery, onion and spices cayenne and black pepper. That was how the rice obtained its 'dirty colour'. The dirty rice we had this evening was a much hearty version - cooked with Chunks of Shrimp, chicken, sausage, okra tomato stew, mixed evenly with pickled onion, cilantro, chow chow relish & french bean salad. The chow chow relish was extremely appetising. I wish there was more bite to the rice, rather than being 'soaked' with stew. 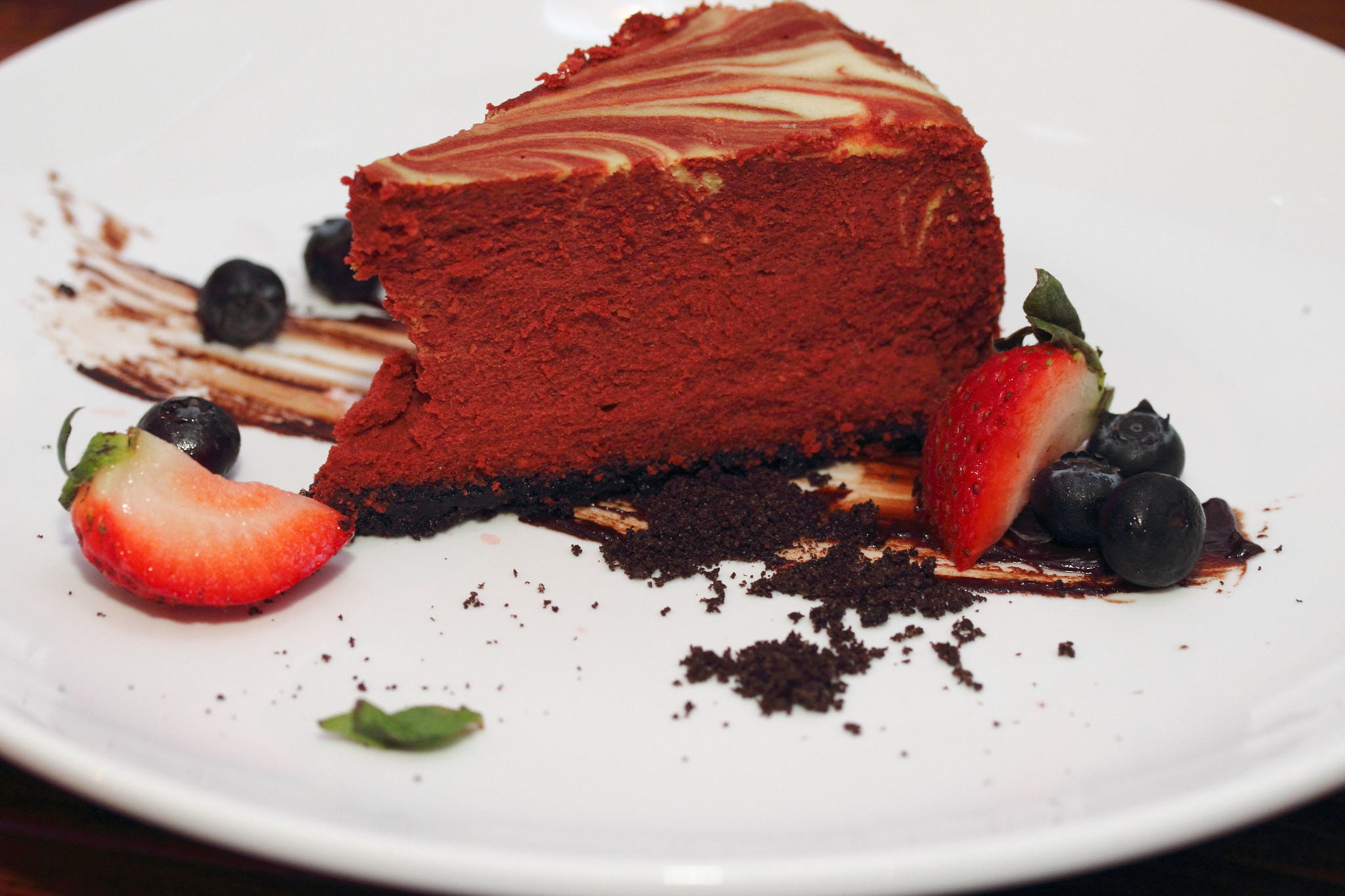 Our journey came to an end with some of their popular desserts. Like Oreo, Red velvet seems to have acquired its own flavour. Here at Season's, one gets to try a Red Velvet Cheesecake ($10). Though it is said to be a popular choice among the diners, I find it too cloying. 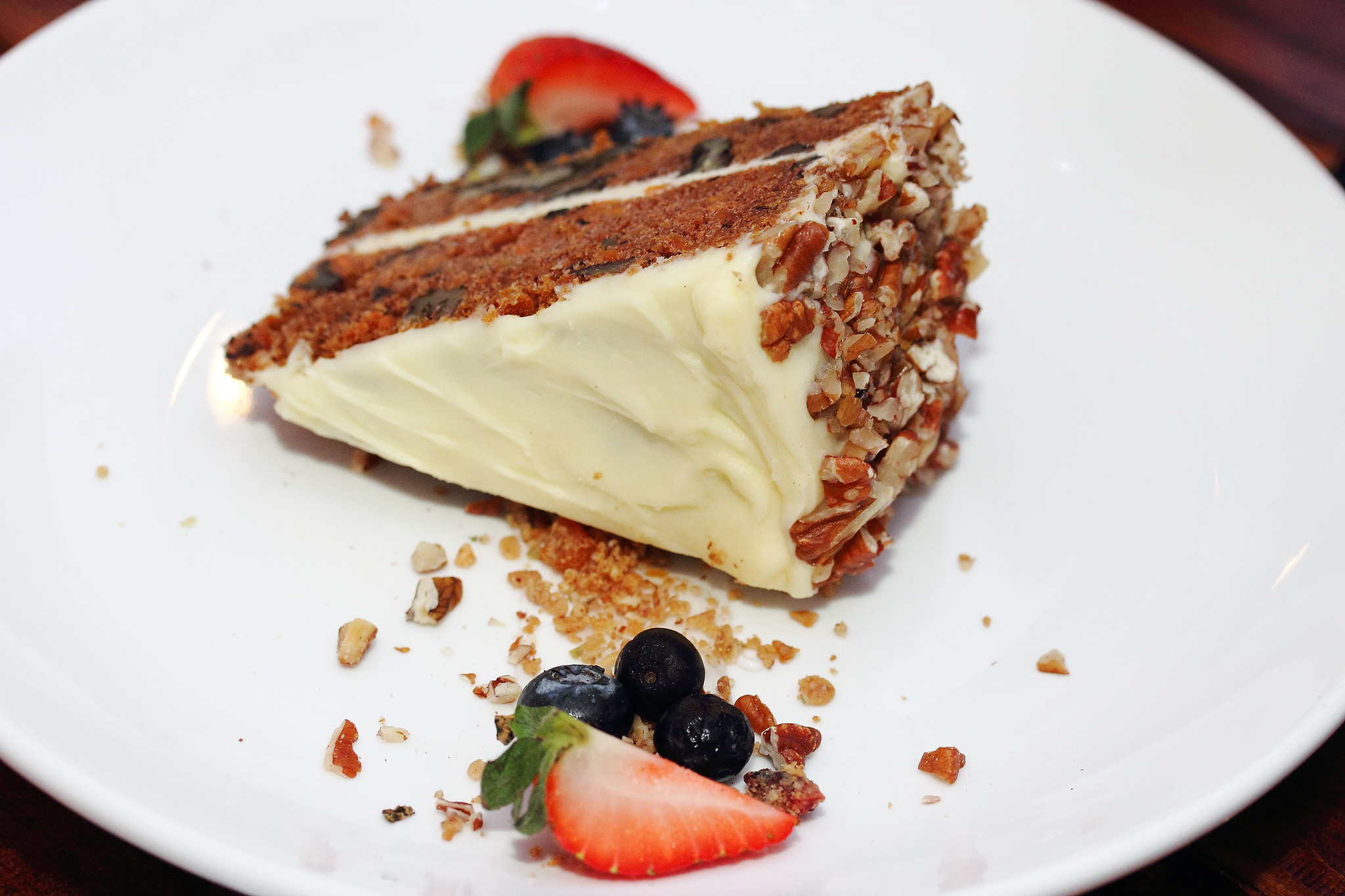 Their Carrot Cake ($12) was a real pity. Although it was loaded with walnuts, the taste of nutmeg and cinnamon was seemingly absent. 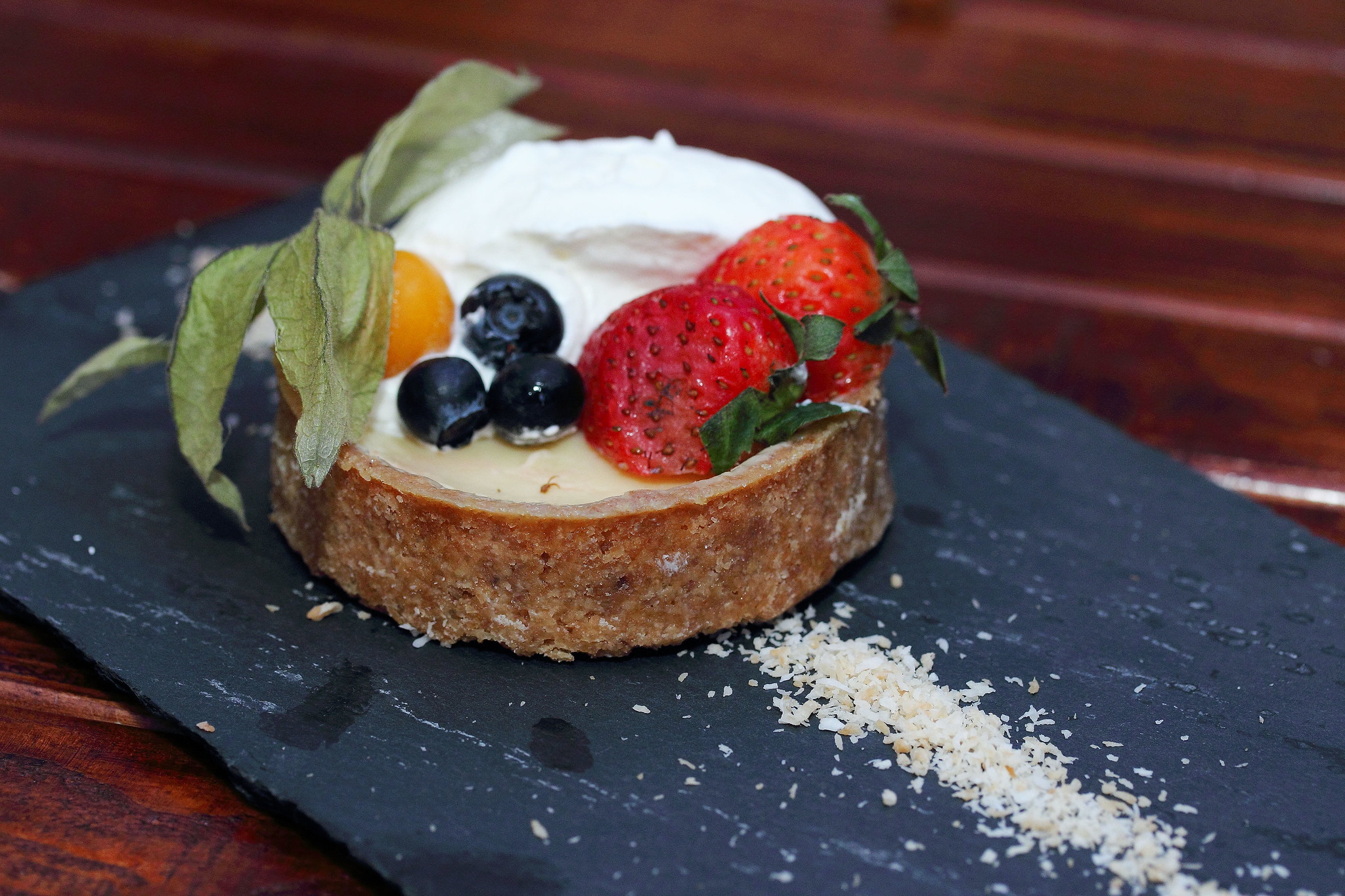 If you like something rummy, you can try their Mojito Tart ($12), which was quite well liked by some diners that evening. It is a toasted coconut tart with mint lime curd & rum cream. But personally, it fell short of my expectations. I feel that the lime curd was sticky on the throat, and the taste did not go well with the rum either. 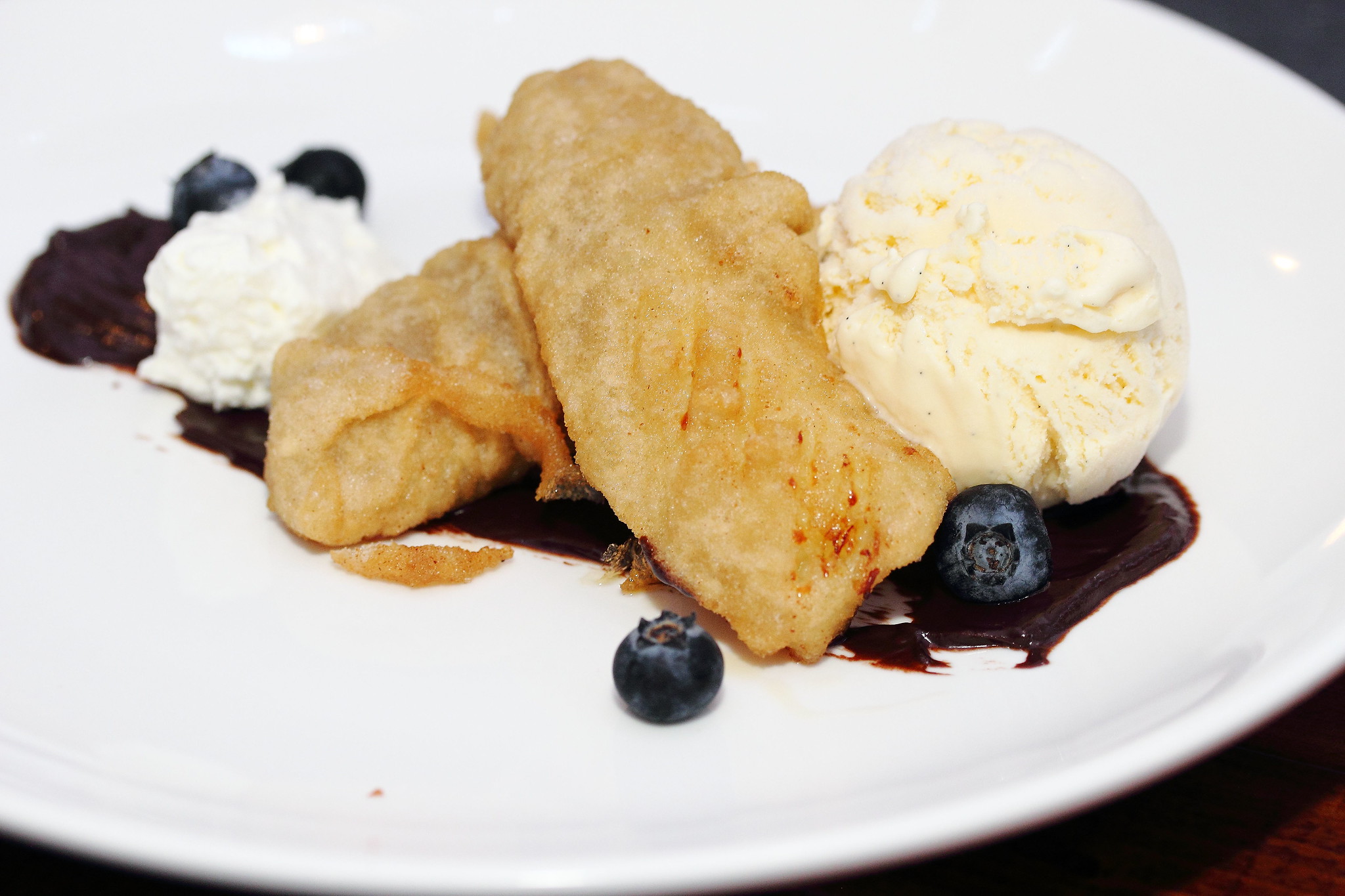 That was when I realised; some classics will always remain as classics. What could go wrong when you pair fried bananas with ice cream? Especially when the ice cream is made with real vanilla pod. Season's Deconstructed Banana Split ($12), was my favourite among the rest. Together with granola nut crumbs, fresh strawberries, nutella & fresh cream... I just wanted to savour it with my eyes close... 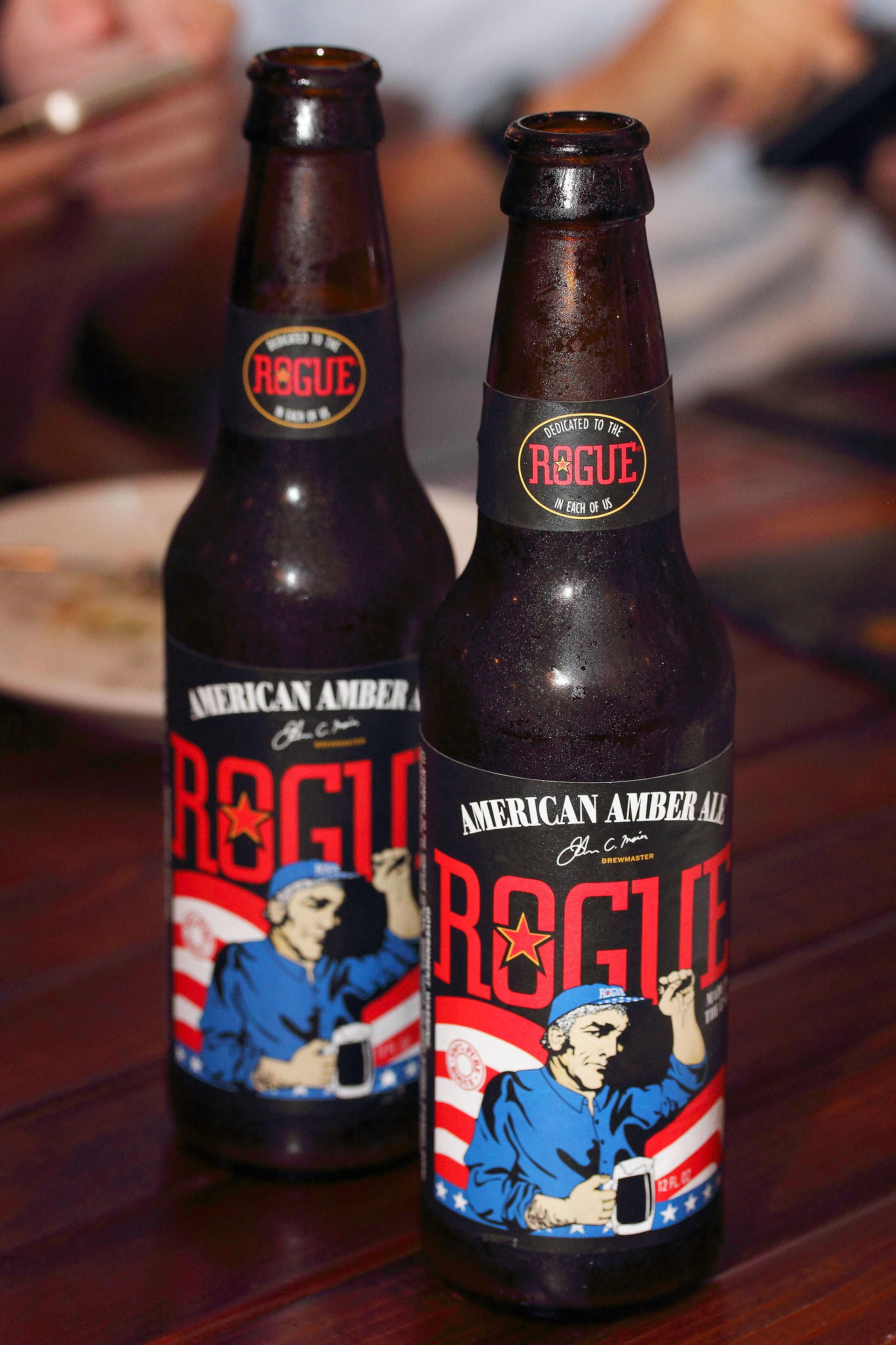 I heard that the lunch menu here is also quite popular among the working crowd. There is also a deli-counter offering gourmet sandwiches, cheese and cold-cut platters for takeaways. Tonight, I really enjoy my maiden journey with Seasons Bistro, and I attribute a large part of it to their impeccable service. Located at a rather obscured corner of Somerset, the food really got to speak for itself. Judging at its crowd, yes, I believe it has done it.