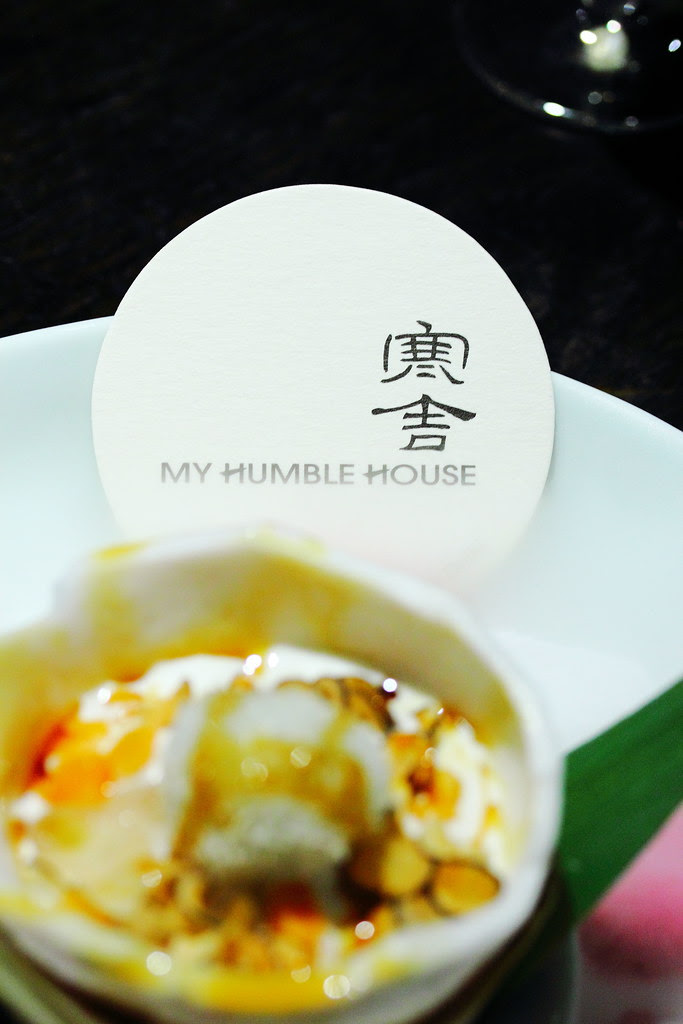 TungLok Group is well known for the restaurants under their management with more than 40 restaurants in Singapore, China, Indonesia, Japan and India representing over 15 brands. TungLok Group has also been awarded twice in the prominent Singapore Prestige Brand Award for being overall winner for Established brands in 2009 and 2011.

The Humble House, one of the 40 plus restaurants of TungLok Group is located at The Esplanade, Theatres on the Bay is the Group's first artistic restaurant celebrates its 10 anniversary this year. 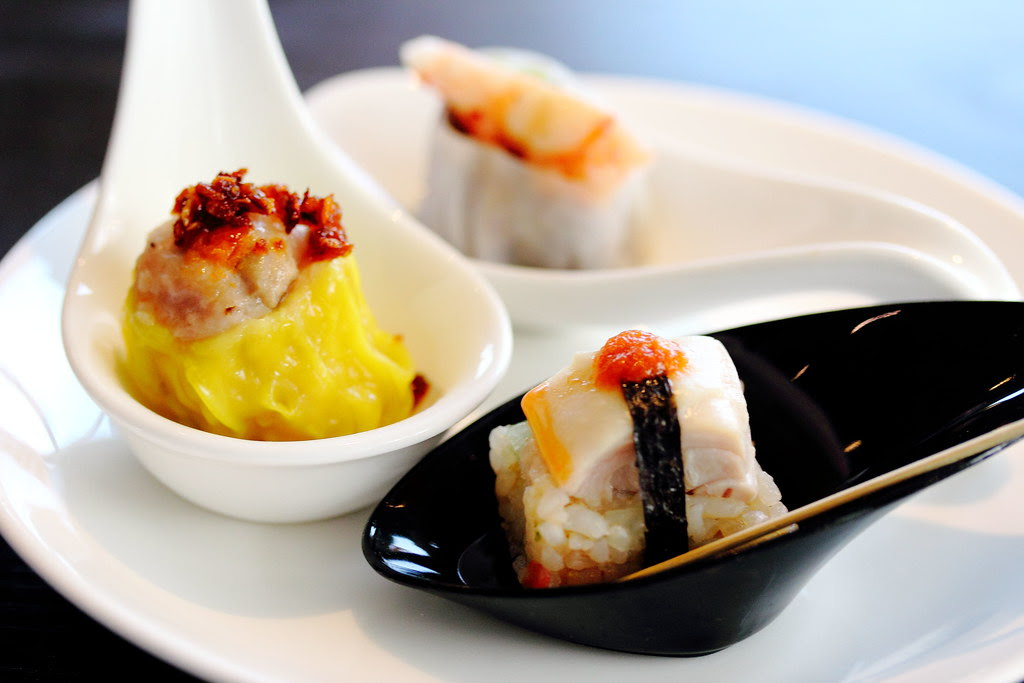 While waiting for all the bloggers to arrive, we were served a delectabe trio of canapes that showcased the artistic endeavour reflected in My Humble House's cuisine, design, service and attention to detail. 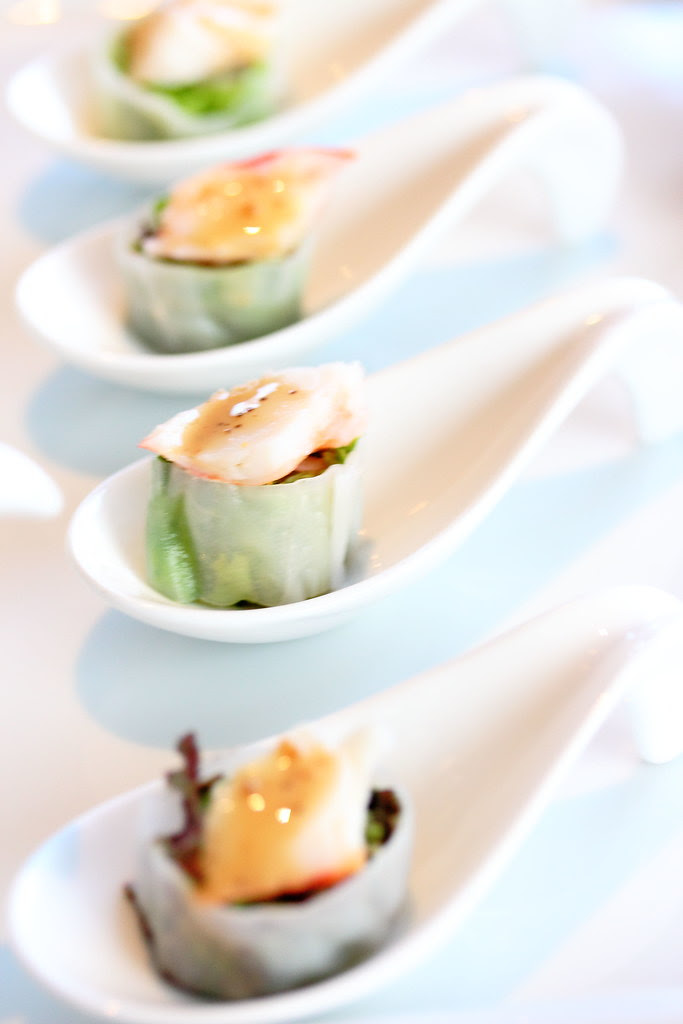 Popping the Vietnamese Roll canape into the mouth came with abundance of freshness with a light delectable sauce that married everything together. 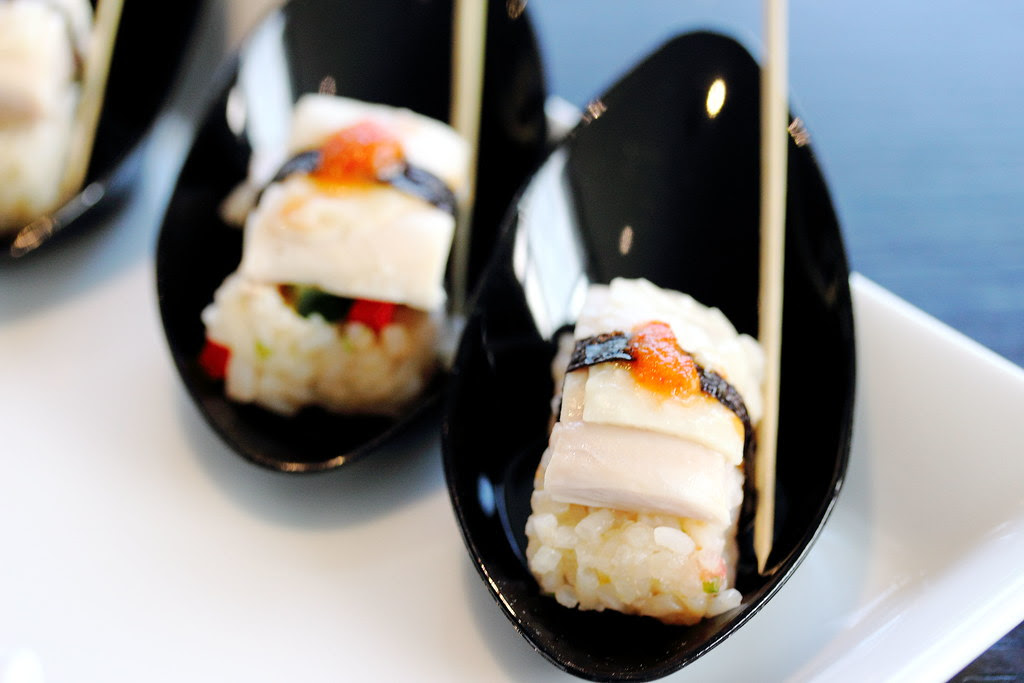 Chicken rice as a canape is a first for me. I am amazed that our local delicacy can be presented exquisitely as a sushi canape. The canape even came with a dash of chicken rice chilli sauce that completes the whole meal of chicken rice. 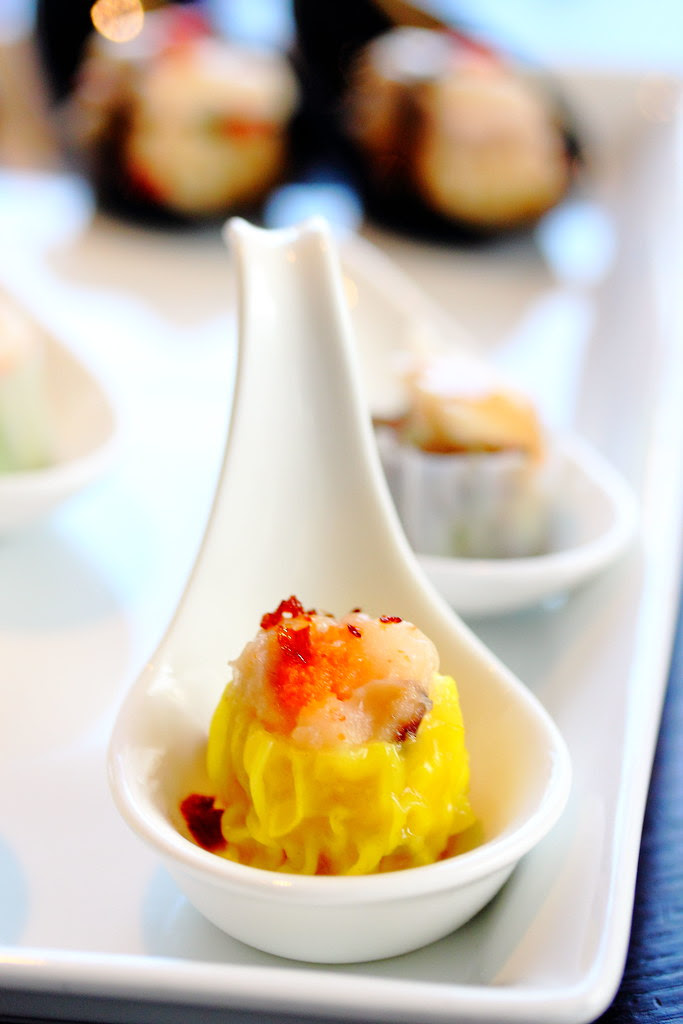 The Siew Mai canape was probably the favourite among the bloggers. The balance of texture and flavour with a hint of XO sauce was lovely executed. 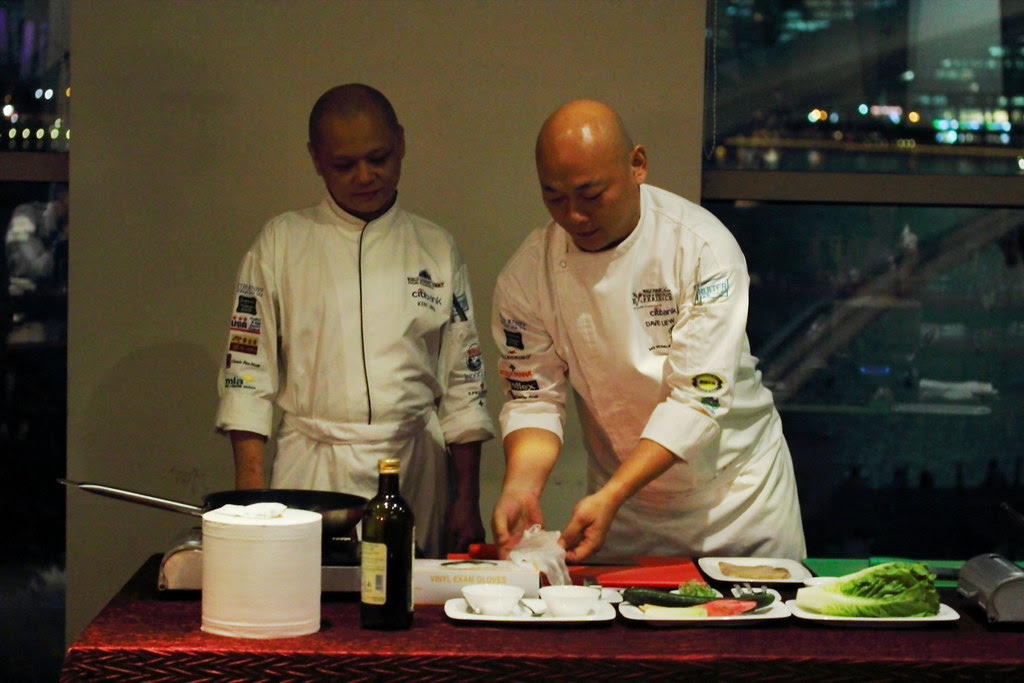 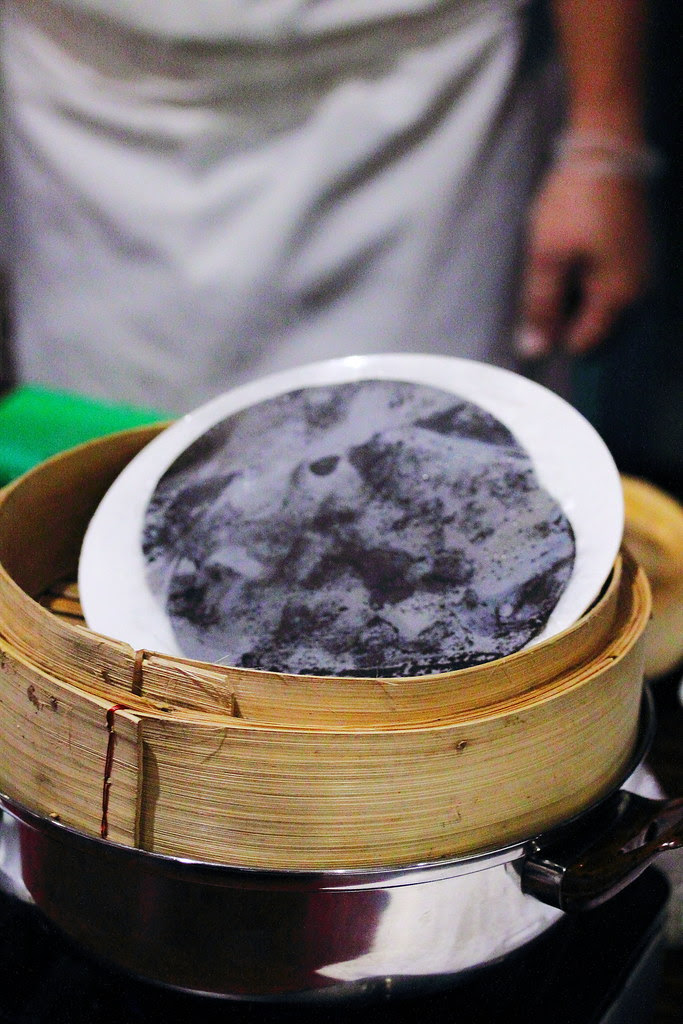 Uniquely TungLok, this is the first time I have seen and tried Black Sesame Crepe. 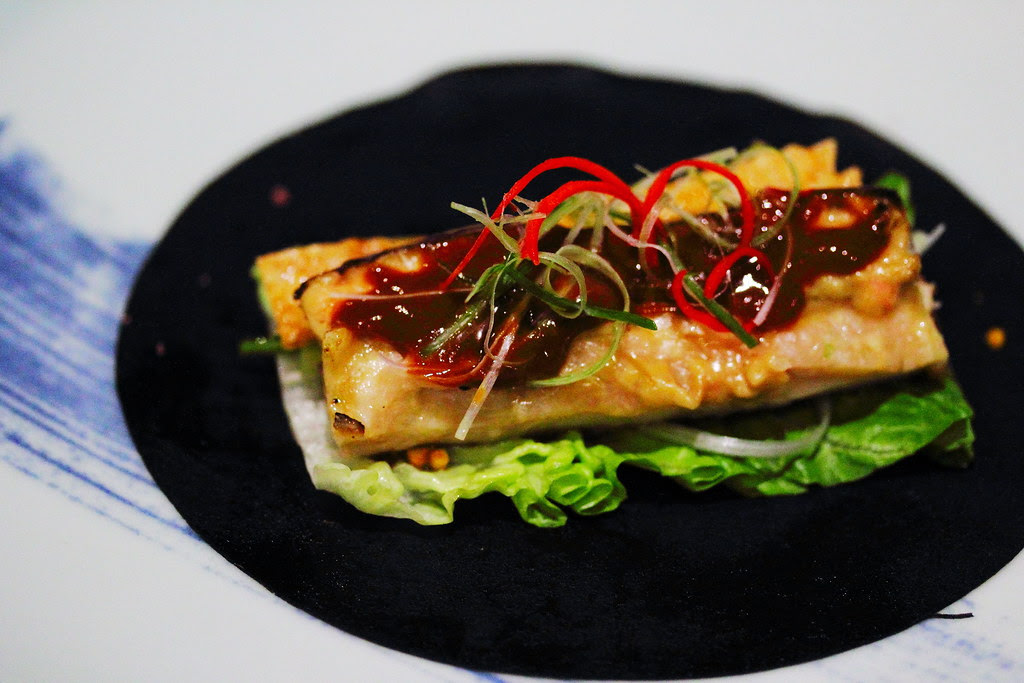 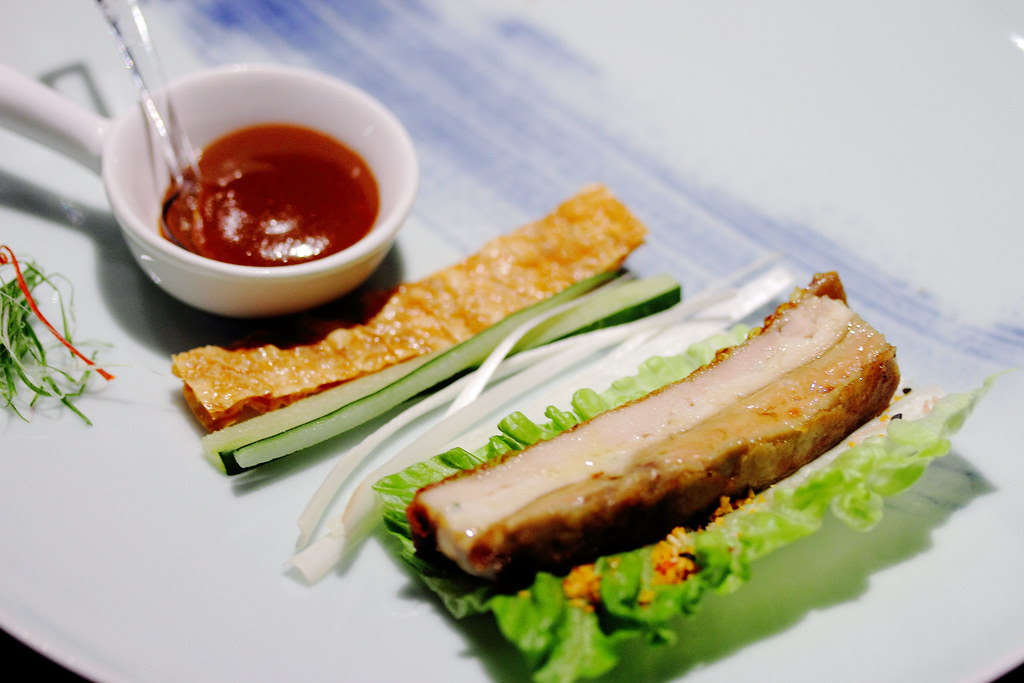 After the demonstration, we were giving the ingredients to plate it ourself. 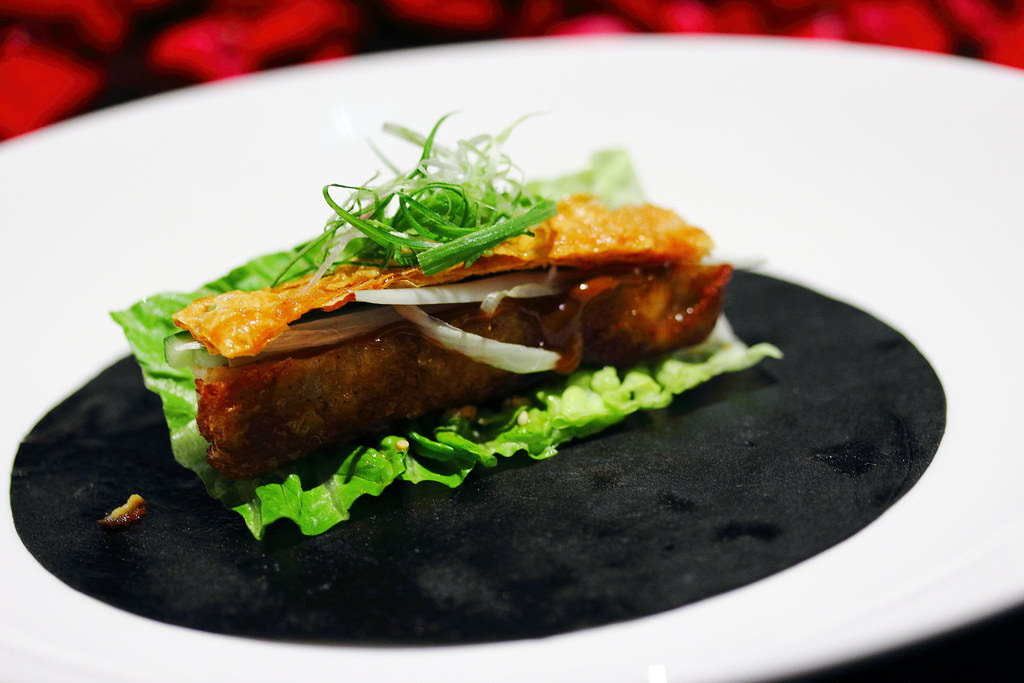 This is my version of the Pan-seared Maotai Wine-marinated Chicken stuffed with Foie Gras wrapped in Black Sesame Crepe. My girlfriend who does not take foie gras commented that it did not come with the acquire taste and she was happy to finish everything. I applauded the creativity of the black sesame crepe which was soft, smooth and fragrant. 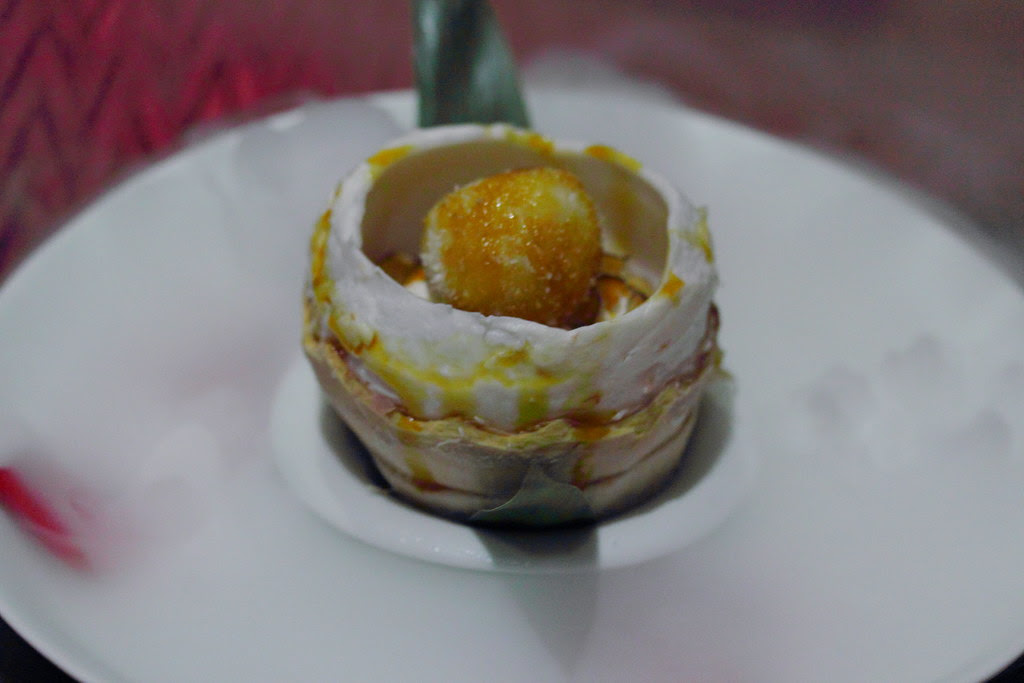 The second winning dish the two chefs put together for us was the Soft Red Bean Banana Ball coated in Shredded Coconut served on Chilled Tropical Fruits with Crushed Coconut-flavoured Ice with Gula Melaka. This is a surprisingly long name for a dish considering the chinese name for the dish only has 7 characters, 椰风蕉雨话南洋. 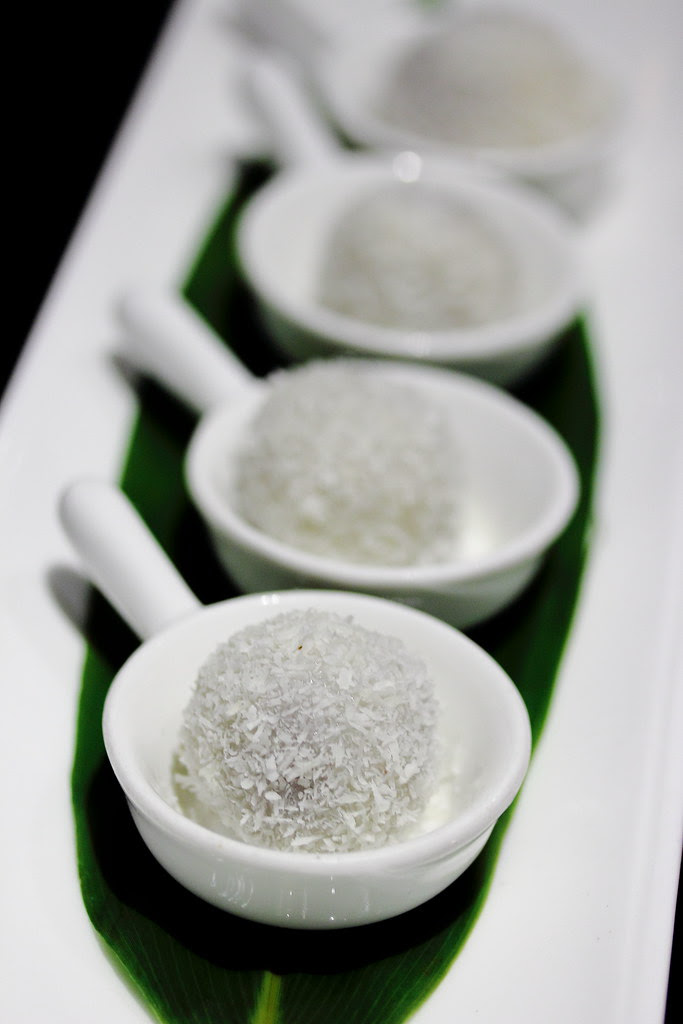 The rice ball or rice dumpling in the middle of the coconut husk bowl was stuffed with banana cubes and red bean paste. 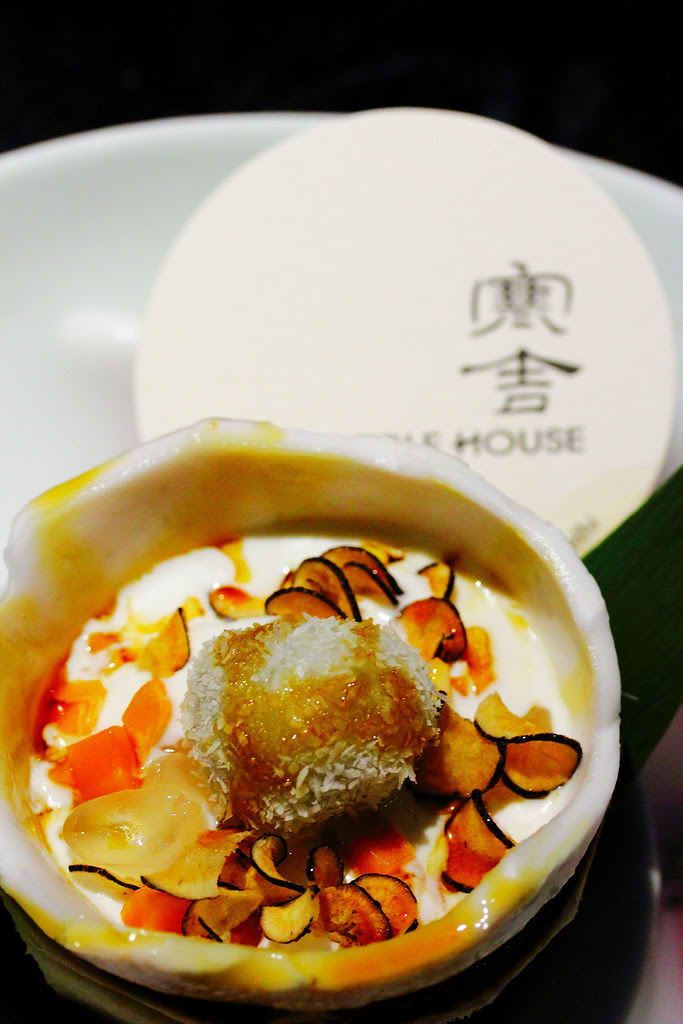 The lovely dessert was like compact coconut platter. The coconut ice cream was made from pure coconut juice, coconut milk, pandan leaf and sugar bringing it to a boil until mixture thicken and refrigerate for 8 hours. The coconut flesh was also deep fry to crispy to give texture.The chef also painstakingly removed the husk making it into a bowl so customers can enjoy the coconut fresh with ease.

When the management asked me whether I have visited My Humble House, I felt bad that I have not visited the restaurant considering it is into its 10 anniversary. I was very impressed with the effort behind each dish and the artistic presentation of them. Attention to details were also put into each dish. My Humble House definitely will be on my next to visit list.

Posted by DerrickTan at 9:06 PM