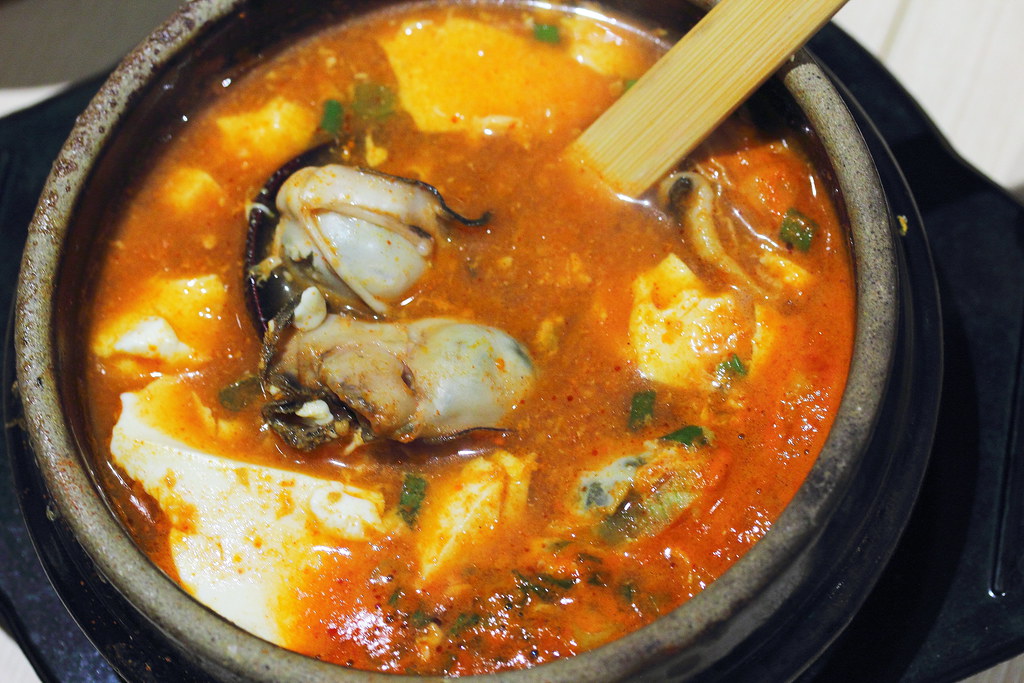 I was thinking about the angle for this review while playing Europa Universalis IV at the same time, and it occurred to me - culinary empire-building is not unlike the real thing. It’s always a balance. You can sell people the equipment and a licence and be done with it; Subway does this and they’re everywhere. Or you can keep a shorter leash, keep a firm hand on the reins; the growth is slower, but more of the original is preserved.

You’d think Tokyo Sundubu would take the first path, considering what their specialty is. Sundubu jjigae is a little more complicated than its name suggests, but it’s still a straightforward stew. But no - the Singaporean outpost of the chain, which has grown to some 35 outlets in its native Japan, is adamant about consistency and control over its chief ingredient.

But I’ll get to that later. Tokyo Sundubu is the least obviously Japanese of the several restaurants in Eat at Seven, the Japanese corner of Suntec City, and perhaps also the most family-oriented in its looks - clean lines, bright lighting, with decor consisting of stacked ttukbaegi pots - the things the jjigae come in. 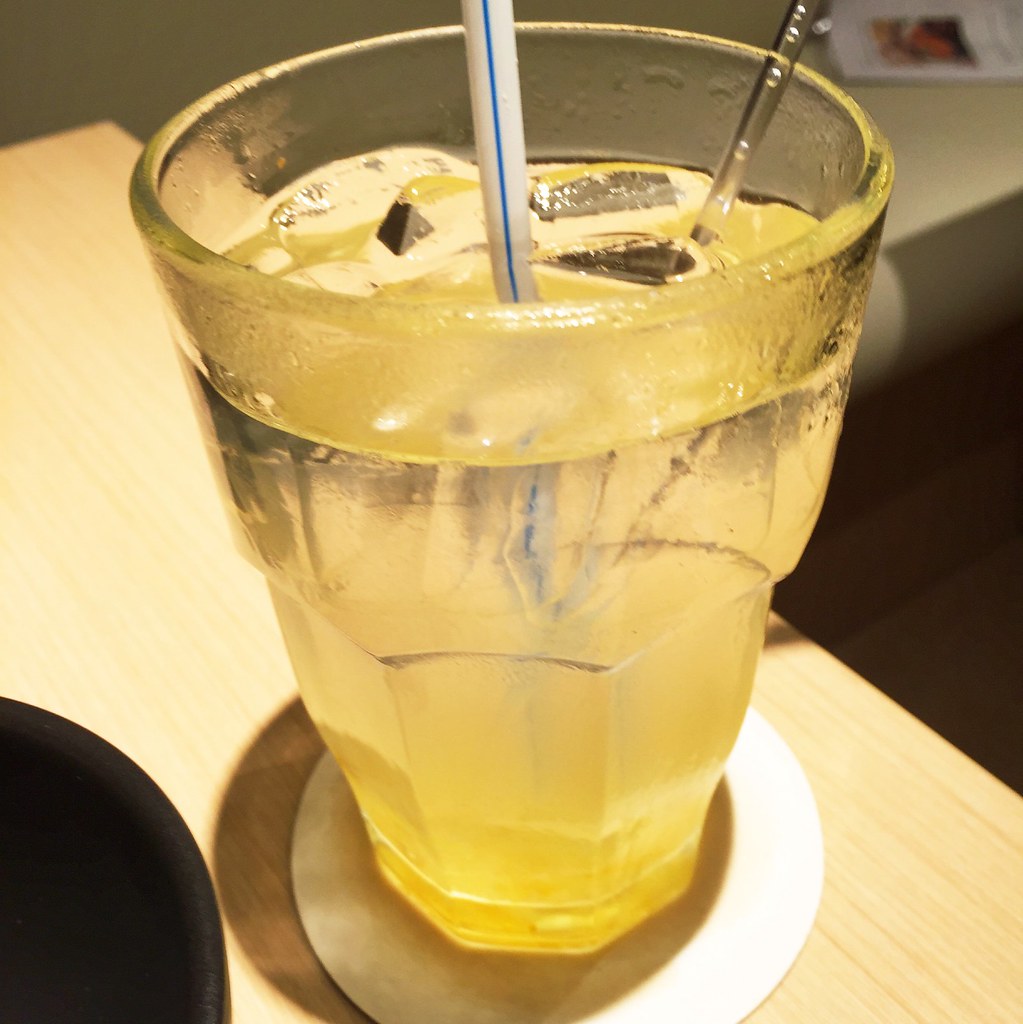 Yuzu Fizz ($3.50) is a bright and clean drink too, not too sweet and very citrusy with plenty of peel, and we are given a little time to look over the menu. The chain was created out of a Japanese chef’s fascination with this homely Korean staple; from the basic material of sundubu jjigae the menu spins out some 20 varieties. To order, you choose what goes in the pot, followed by a choice of soup and spice level; then the jjigae is made to order. 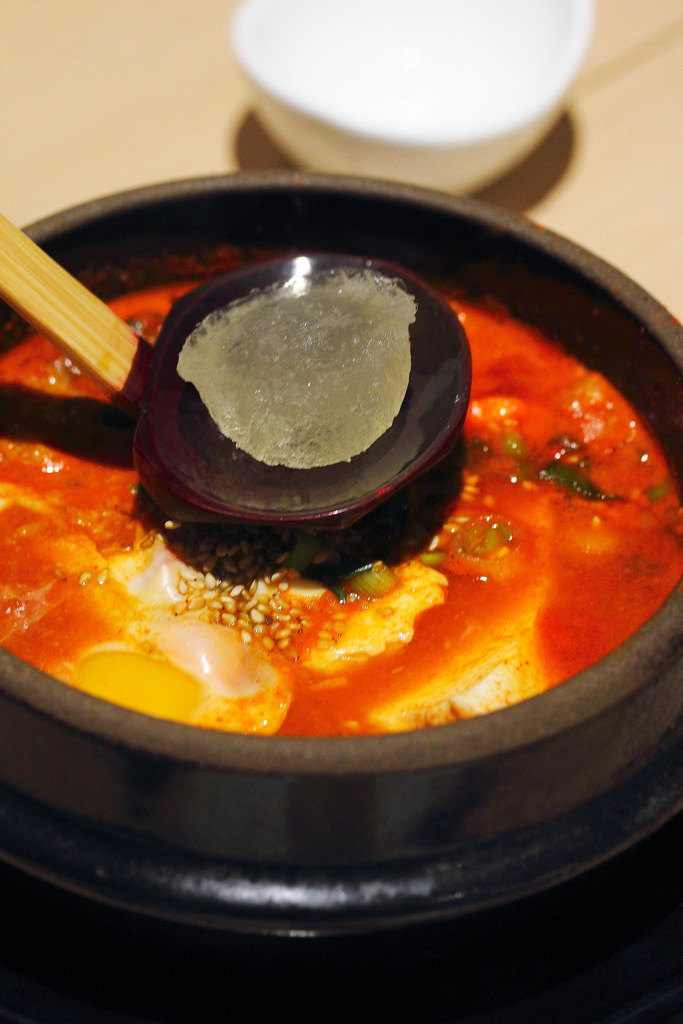 The Health and Beauty Sundubu ($18) comes in a broth where gochujang and miso mingle with the sweetness of mirin, all gently bubbling around a slab of tofu. And here’s the place to talk about that tofu - they go to some length to maintain that abovementioned control and consistency. The tofu is made in house, since sundubu doesn’t keep long; the soy milk is actually flown in from Nagoya, just so it’s the same stuff they have back home.

Is it worth it? The soybean’s light flavour somehow manages to float above the gochujang; the curd is fluffy and wobbly. So that’s a yes. Tofu and okra constitute health; beauty comes from the egg, as well as another wobbling globe of collagen made from fish skin, which shimmers as it dissolves. 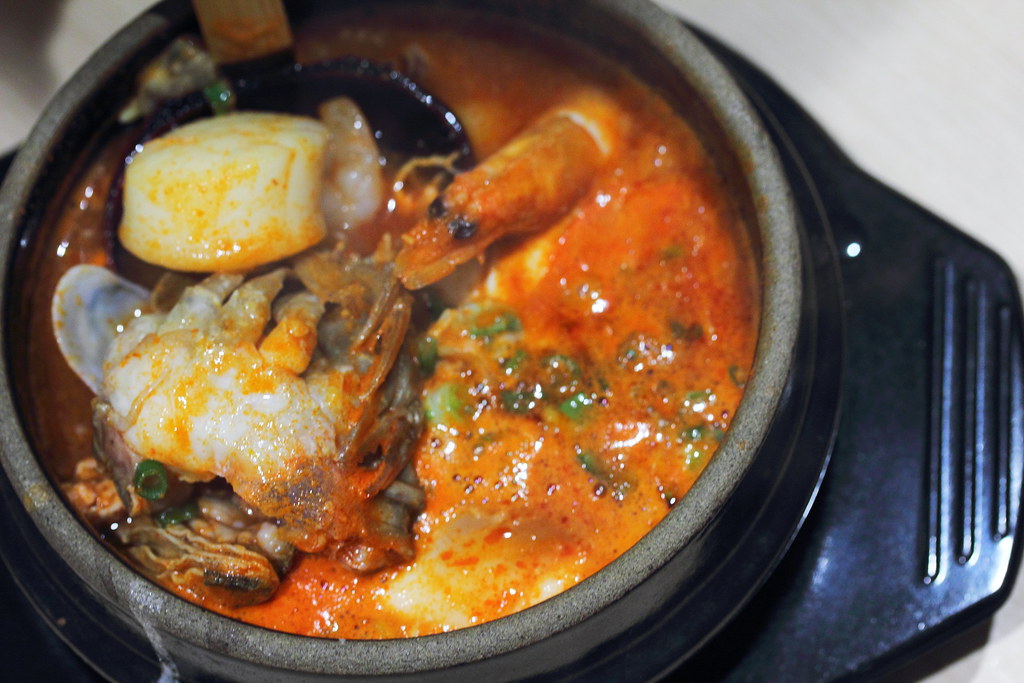 Similar elements appear in the Seafood Sundubu ($24) as well, the main difference being the salt and ginger soup base, which carries a little more warmth from the ginger. For the broth, Tokyo Sundubu does make a compromise - the versions used in Singapore have been tweaked to the local taste. The spice levels, though, are still pretty mild - at level 2 you can easily taste the ginger. If it is chilies you are after, go for level 3. Seafood includes clams, squid, prawns and even swimming crab which keeps its marine sweetness well. 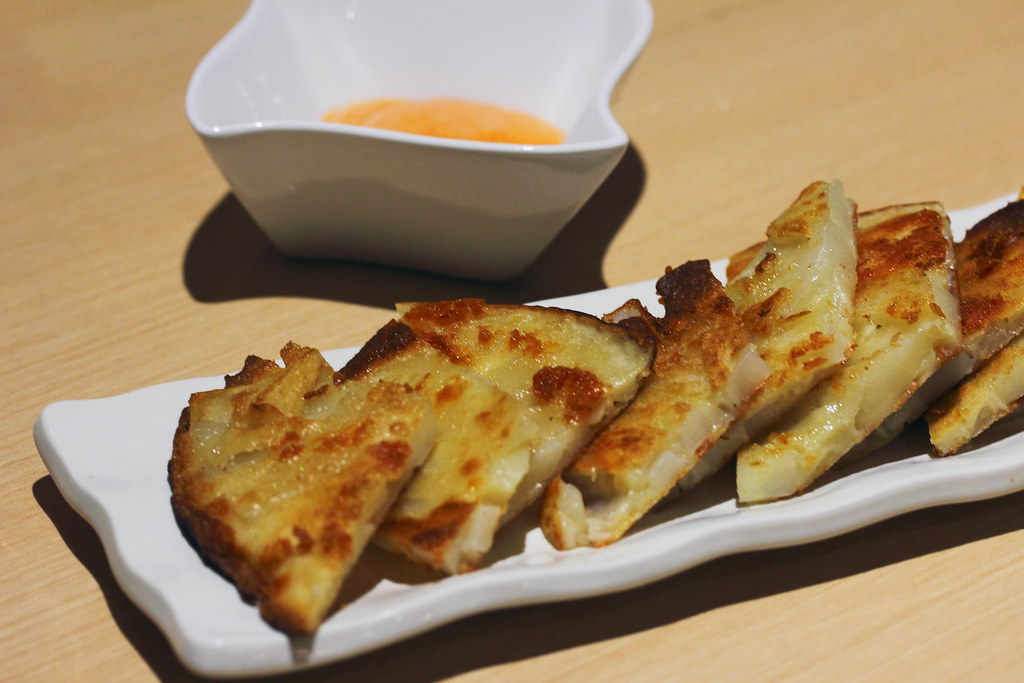 Potato Cheese Pancakes ($12) may look a little plain to the camera, but are as tasty as you expect anything with cheese and potato to be - the cheese distinct but still friendly, with strips of starchy, soft potatoes that have felt the heat of the teppan. Nonetheless, I do notice they have the good old pajeon (with scallions), and I would probably still have gone for that. 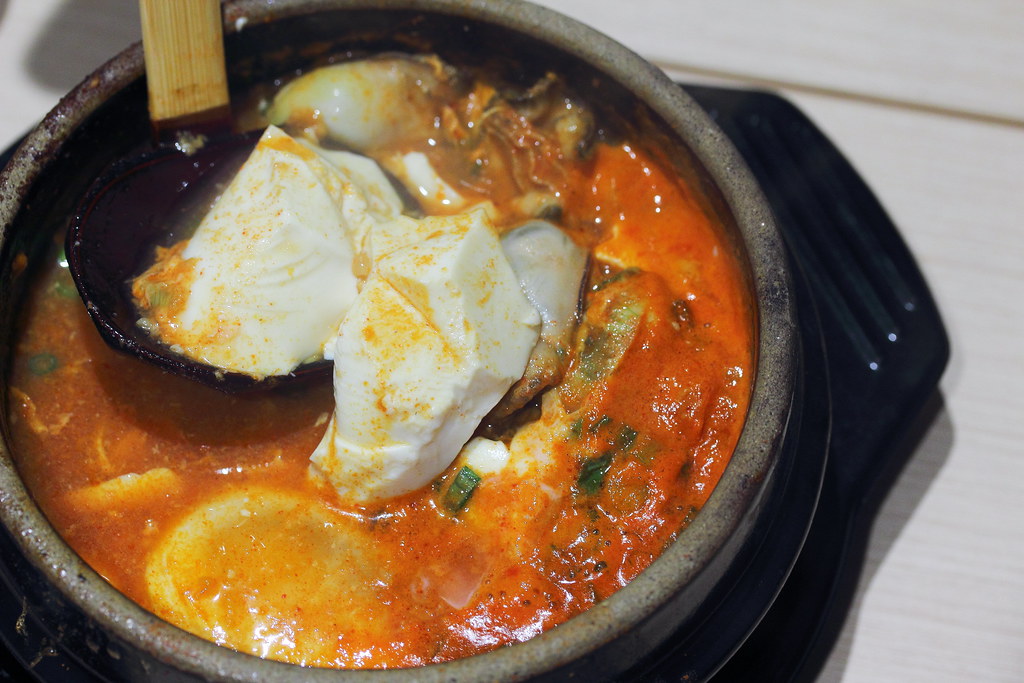 Tokyo Sundubu’s attention to detail is impressive, and they are rightly proud of it. That they have trained the staff properly about what they do is also apparent; throughout the meal we are introduced to the dishes by the wait staff. That is how we learn, for instance, that each bowl of sundubu jjigae contains less than 500 calories.

But at the same time, the soups we try do blur into each other quite a bit, in a problem common to Korean food (for me anyway) - the range of flavours is fundamentally limited when you have things as potent as gochujang and gochugaru being thrown into everything liberally. I do notice they have more exotic flavours which might break the mould, though, so actually I’d recommend you bring people with you and try a few at once when visiting.