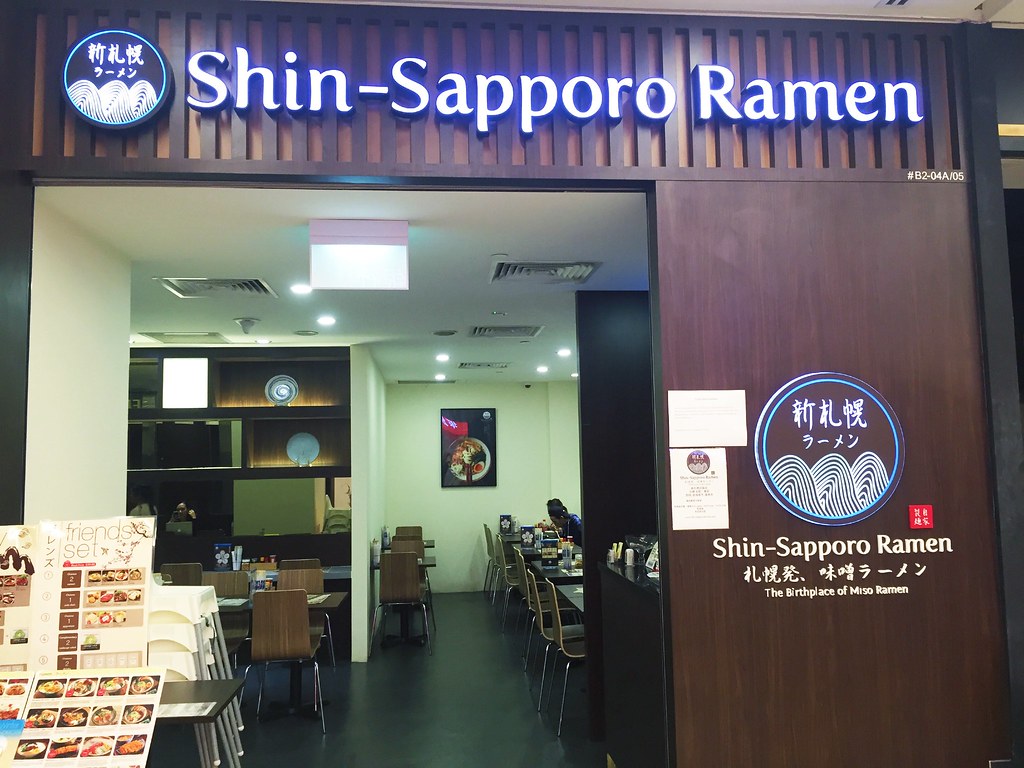 Humans are visual animals, and for restaurants to give people something to look at is nothing new. The Japanese absolutely love that, to the point they have a term (moritsuke) for it, even if that is a term normally used for more refined dishes than ramen. Ramen is fast food. Ramen rarely cries out for artful decoration.

But what ramen could use, visually, is a bit of spectacle, and that’s what Shin-Sapporo Ramen is happy to provide with their new special. They’ve done their bit to hype the new special with a bit of mystery, just calling it Fire Ramen, which could really mean anything. They probably mean ‘fire’ figuratively. I’ve written before about how capsaicin works by tricking your mouth into thinking it’s on fire. That must be what they’re driving at.

Shin-Sapporo Ramen is no stranger to Singapore by now, and the name itself has potency to people who know ramen; Sapporo, after all, is the birthplace of miso ramen - thick almost to the point of viscosity, its flavour massive and deep and clinging to the mouth, quite literally. It’s just the thing when your taste buds have been blasted with the Hokkaido cold, though - to cater to demand from a tropical land - they have since expanded their menu to include the more familiar and less imposing tonkotsu and shoyu stocks as well. As with most ramen places, the quality of the stock is the foundation of their success; but Shin Sapporo has been willing to tweak it in some unusual directions. 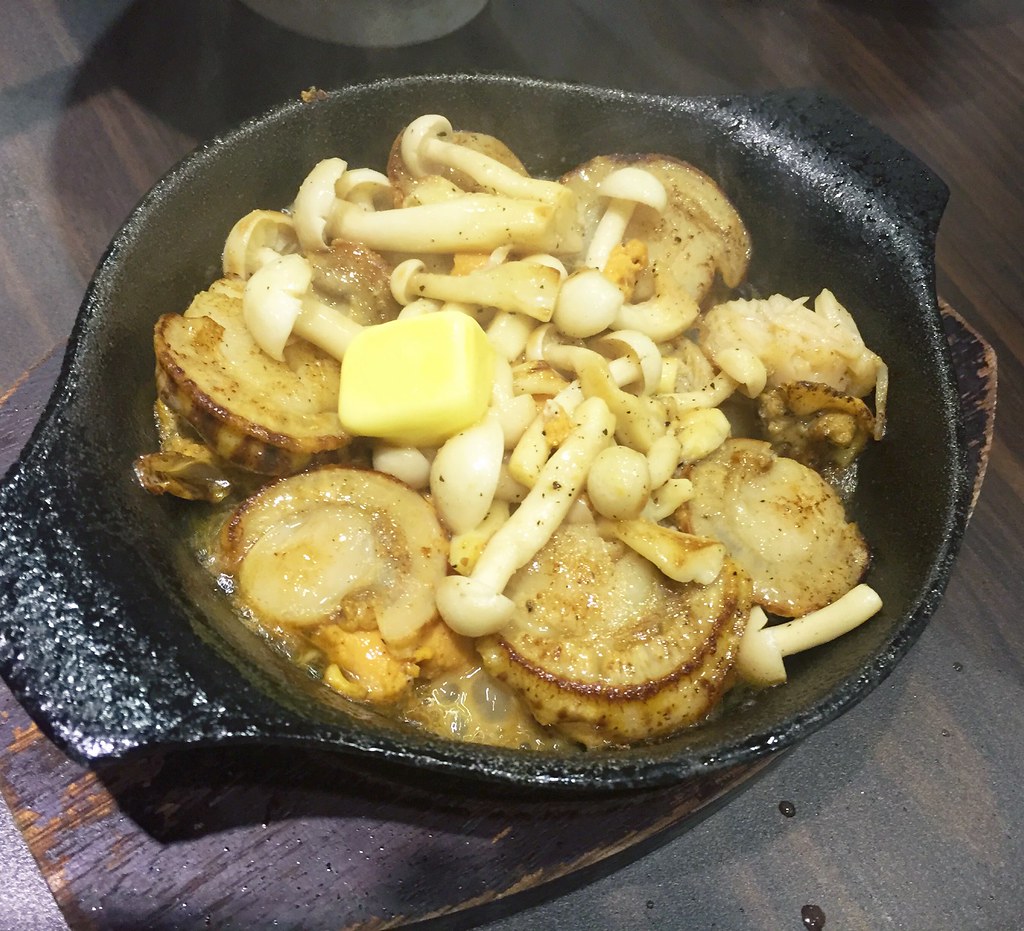 Still, before any of that, we get a skillet of Butter Hotate - Scallops, with everything save the shell, on a bed of shimeji and melted butter. It’s best eaten hot, when the flavours are still swirling about, the scallops gleaming with a coat of butter and still springy. 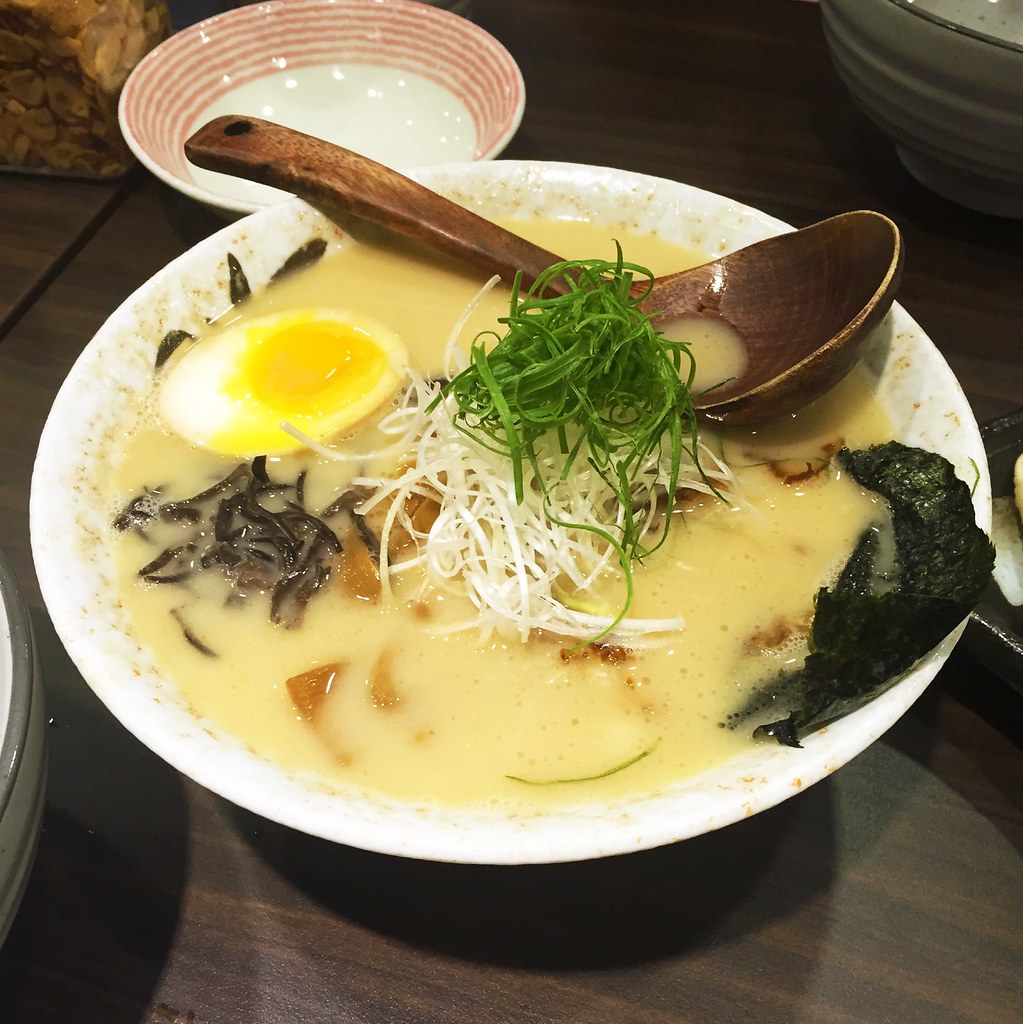 Then comes the Sake Ramen, or rather the sake ramens - one based around the classic pork stock, the other based around Tokyo-style abura soba, springy noodles tossed in plenty of black tare. The sake is a lot more obvious in the soup noodles, springing eagerly out from the broth and lingering at the end of each sip. But there is method in the drunkenness, and the sake is not an intruder by any means; woven in with the thick stock, it is another long note and one that does not clash. 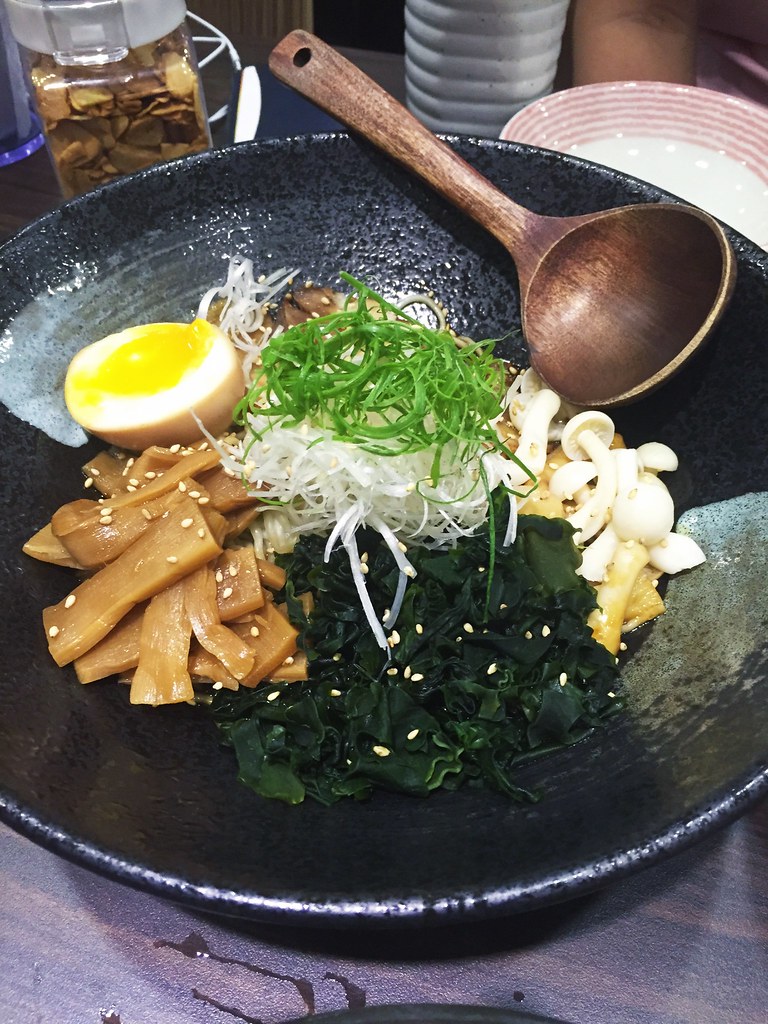 We are told that the Abura Soba is a lot more common among female customers - presumably it looks less substantial, though it really isn’t. It glistens with oil and shoyu, but the sake remains hidden until slurping. The difference between this and the soup version is really just like the difference between drinking cold and warmed sake; with the dry noodles there is no hint of what is to come before the liquor hits. There isn’t enough to make one tipsy, but it probably makes the world feel slightly better and less weighed down with troubles. 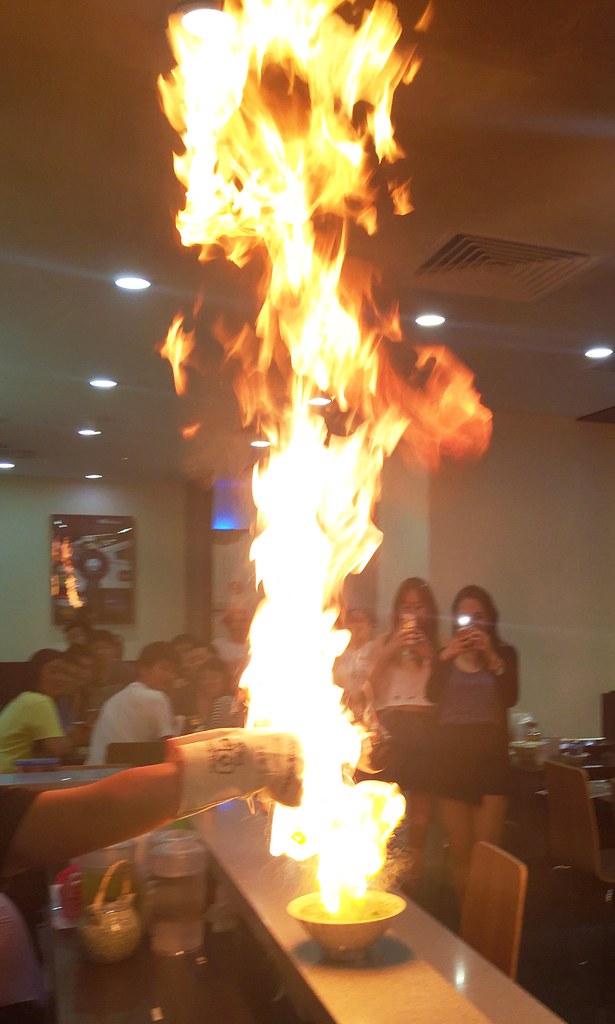 Back to the Fire Ramen, at some point the host points to a soot-stained patch of ceiling above the counter, and that’s when I realise they really meant Fire, literally. That oil in all its forms - flavoured, heated, animal or vegetable - plays a big part in every bowl of ramen is well known. But here, the oil is heated to ignition, then poured into the soup, which is valuable both as a spectacle and as a lesson on why you don’t douse an oil fire with ramen broth. Or, uh, water. 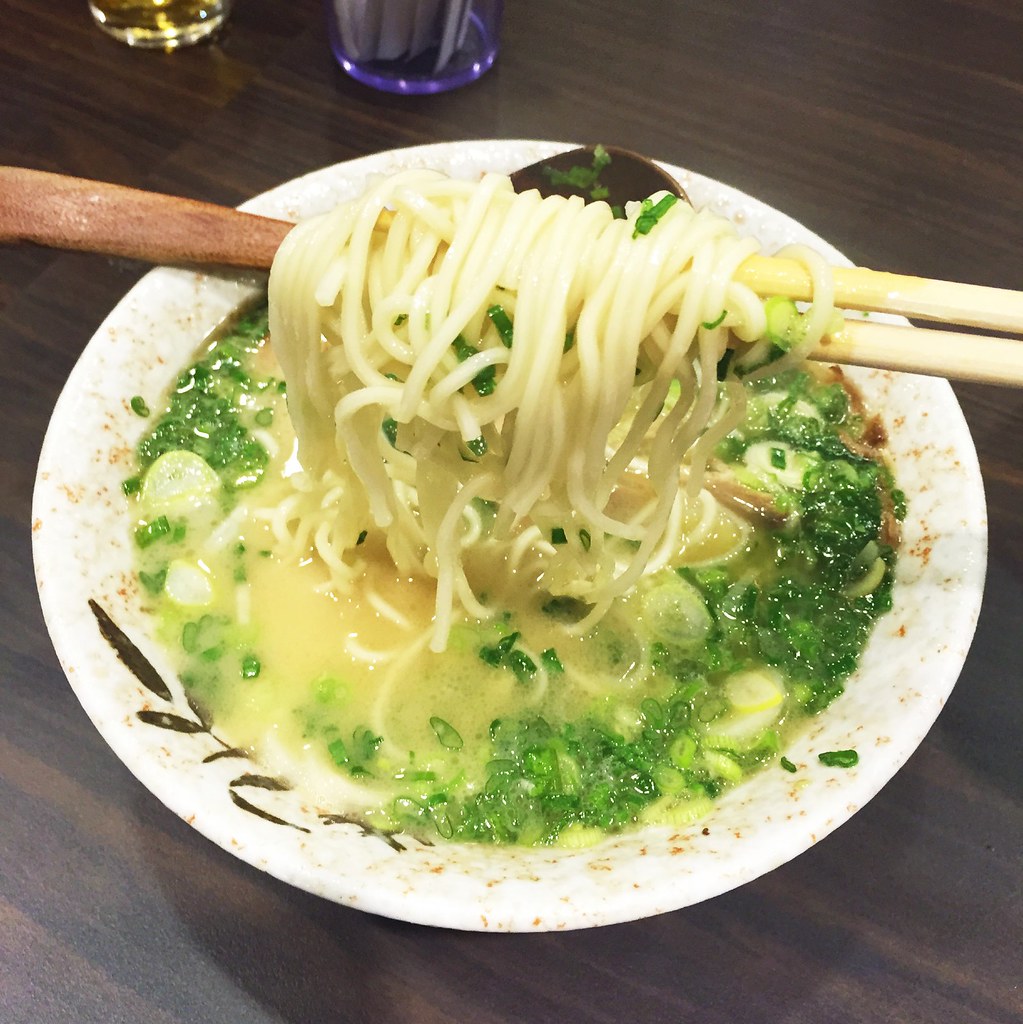 Thankfully, the demonstration is not all there is to this bowl of noodles. Modifications have been made to allow for the fireworks; most ramen toppings, like egg or chashu, would be charred and sooted if exposed directly, so instead a thick layer of chopped scallions floats on the soup, protecting its tenderer bowlmates. The oil forces the fragrance out of the scallions; it’s a little like how hot oil is splashed on spring onions and ginger on a Hong Kong steamed fish. Is it a bit anticlimactic? Well, in their defence, there isn’t anything that would top a two-metre tongue of flame - not anything edible, anyway. 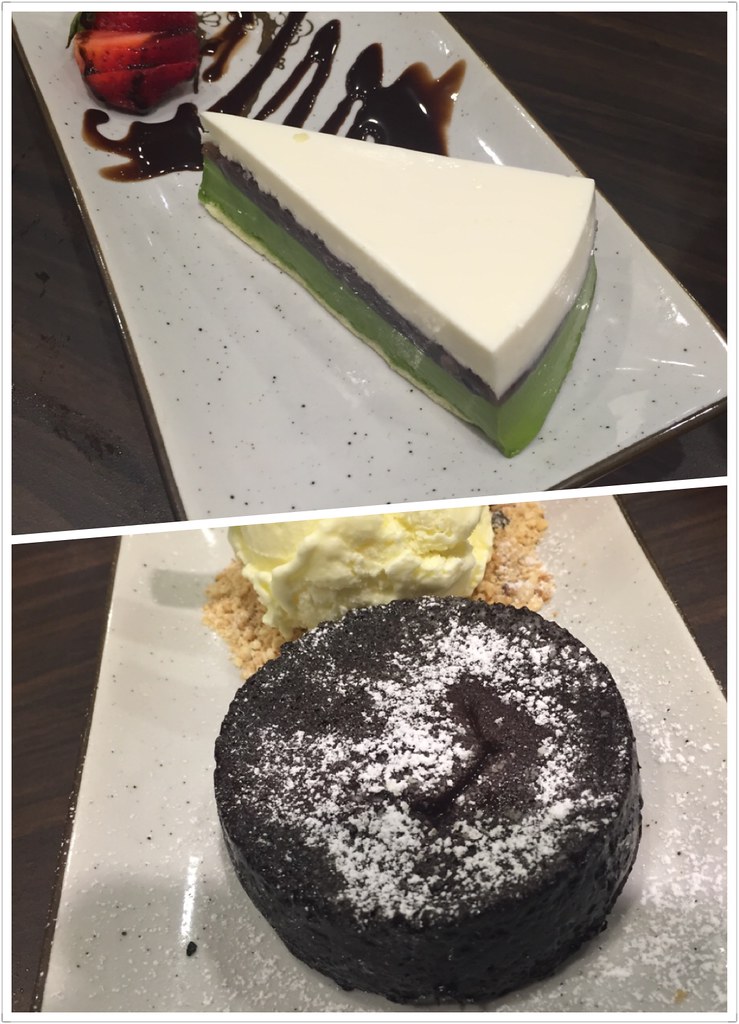 We finish the tasting on a much more mellow mode, with a nicely wobbly Matcha Cheesecake and Chocolate Lava Cake that is unctuous as any, a much needed bit of sweetness to end a meal that has been mostly lip-sticking umami. But good lip-sticking umami, no doubt. Both the sake ramens are subtly thought out, playing with sake as much as they are playing with the noodles. And as for the fire ramen, the spectacle is not all there is; the heat of the fire is meant to add something to the bowl besides the drama. They’re definitely both worth a try.