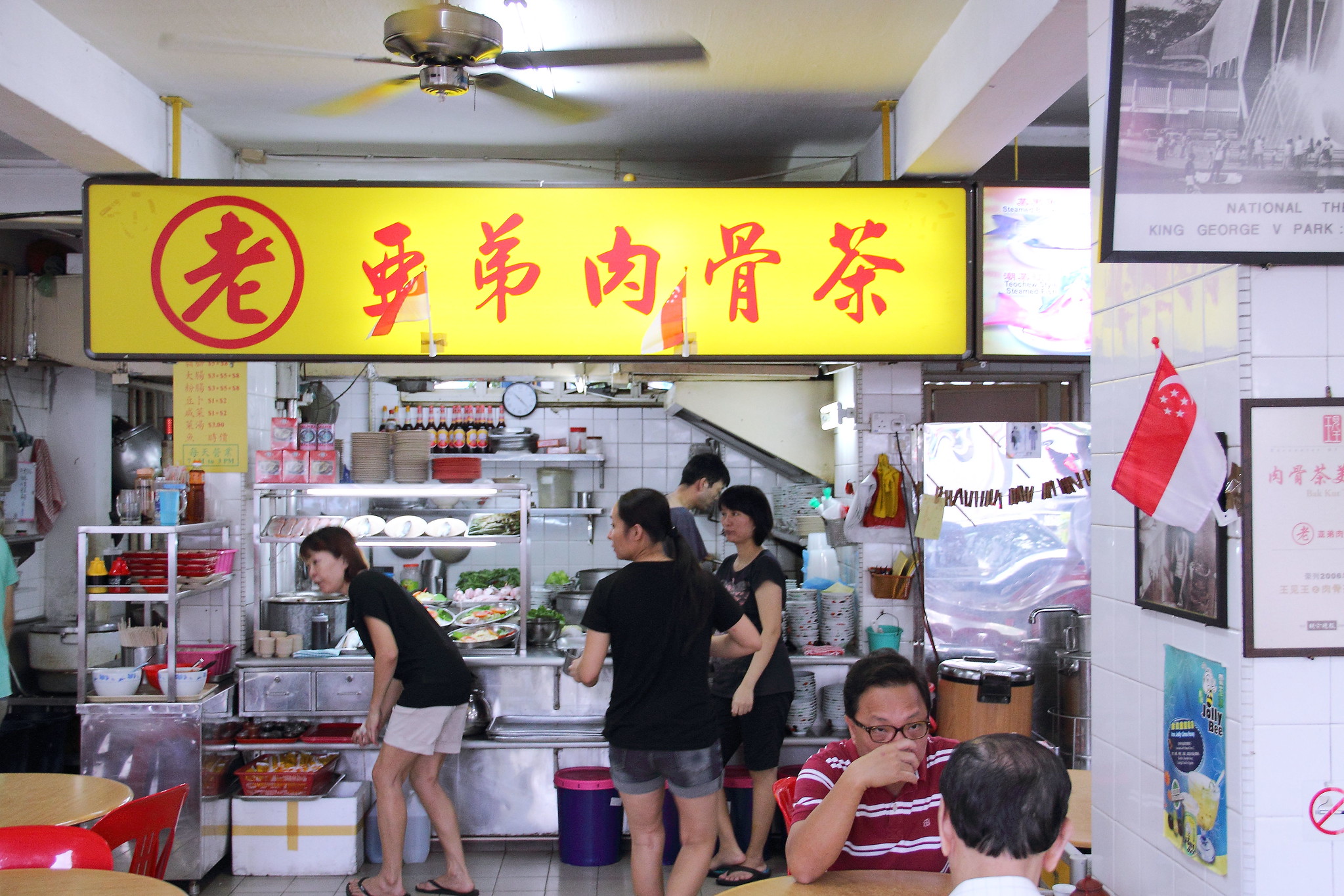 Many people may not know or heard of Lau Ah Tee Bak Ku Teh (老亚弟肉骨茶) at Whampoa West along Upper Serangoon Road. Little did many know that the owner Mr Sim Choon Lian or more commonly known as Lau Ah Tee learnt his recipe from his uncle Ng Mui Song who is also the founder and father of Ng Ah Sio Bak Ku Teh. It was my great privilege to meet one of the pioneers in Teochew bak ku teh and who is so keen to share with me the heritage story of bak ku teh. 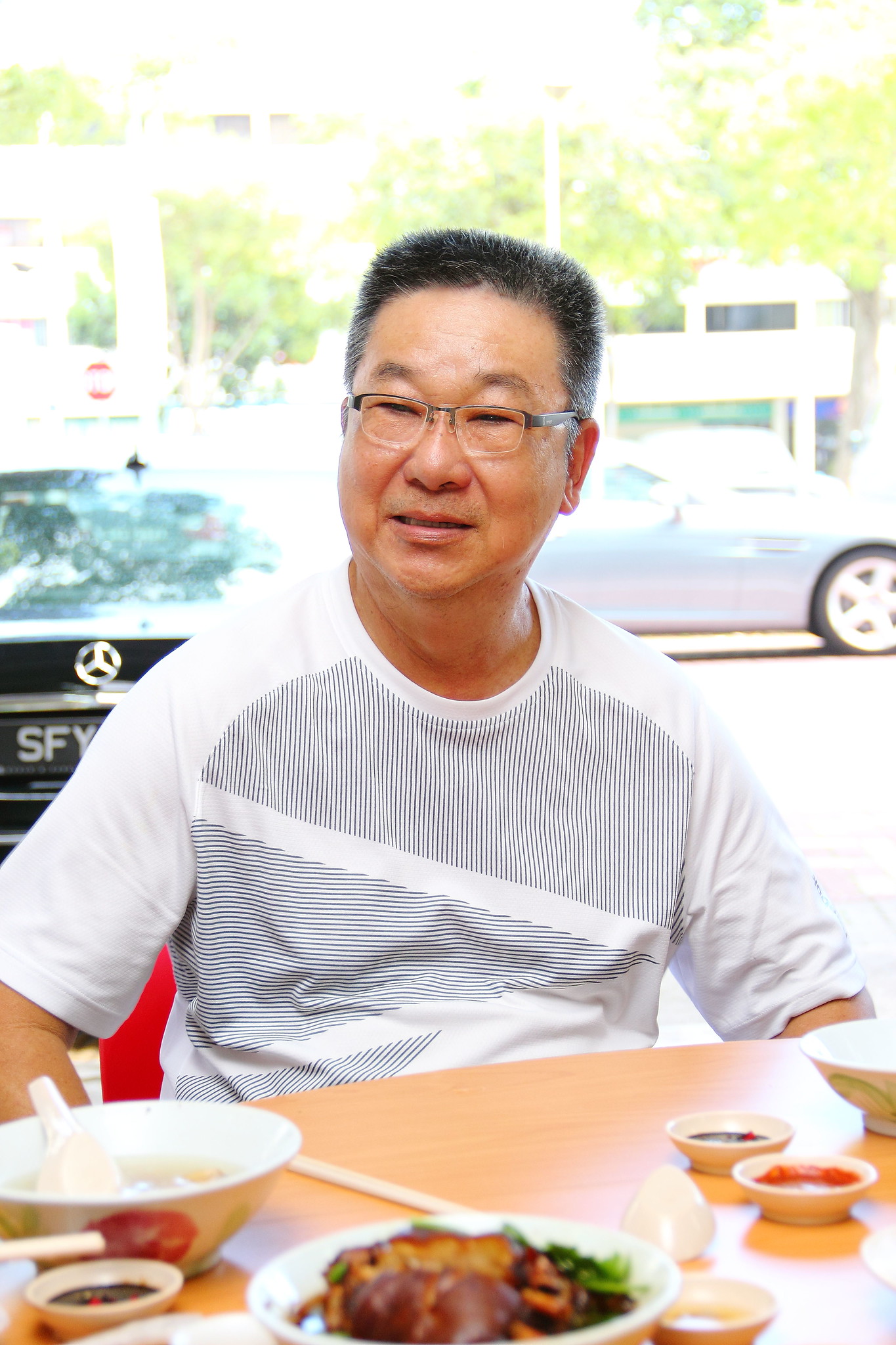 Mr Sim is now already 67 years old. He started working at his uncle stall when he was around 16 years old.
Previously he has worked in a Teochew porridge stall and  duck stall before working for his uncle. It is no turning back from him since then in the bak ku teh business. 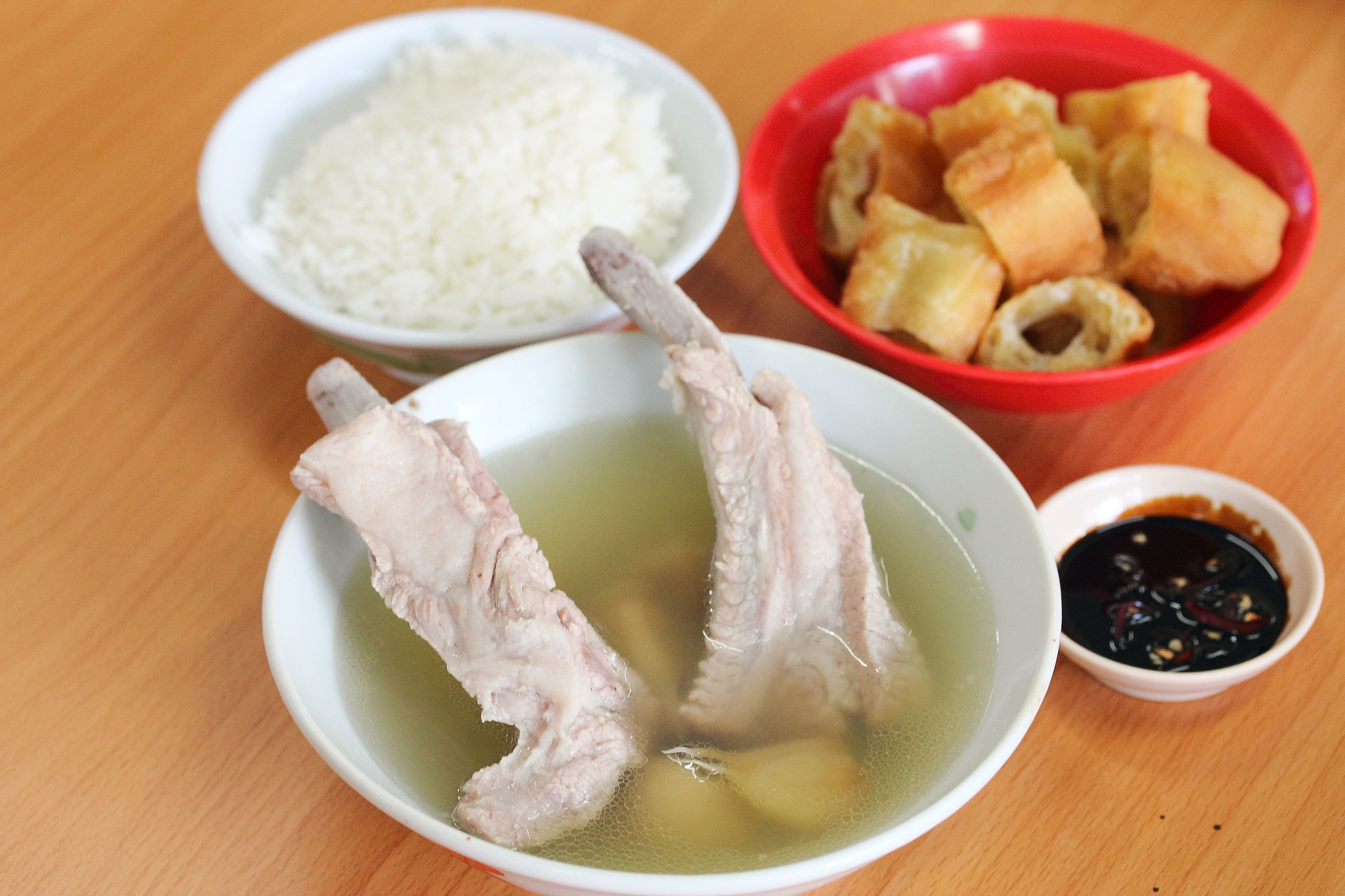 Lau Ah Tee Bak Ku Teh uses Indonesian pork for their Bak Ku Teh and they are cooked only in water, pepper and garlic. The result surprisingly is a clear soup with the sweetness of the pork. The full bodied, garlicy and peppery soup was flavourful but not overpowering. We had the prime ribs or more commonly know as dragon bone (龙骨) which was tender and fell of the bone with ease. Mr Sim also shared with me that in the earlier days youtiao was not served. It was not after coolies brought their own youtiao to soak up the delectable broth that it was introduced at a later stage. 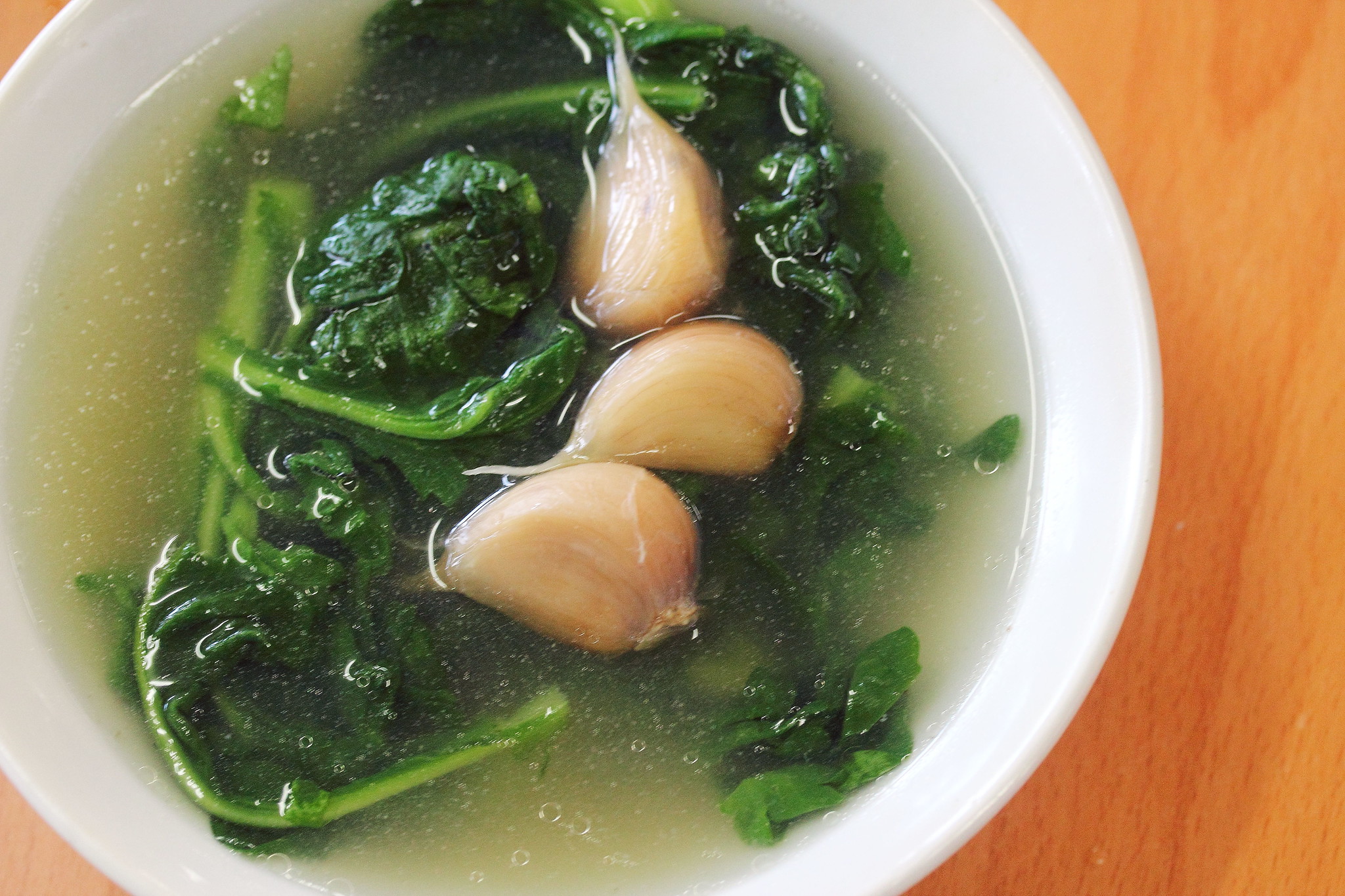 I love to have Tang Oh also known as Chrysanthemum Coronarium especially during steamboat. I am glad that I can get Tang Oh soup at the bak ku teh stall too. Some people find that the vegetable has a bitter earthy taste but that is exactly what I enjoyed. 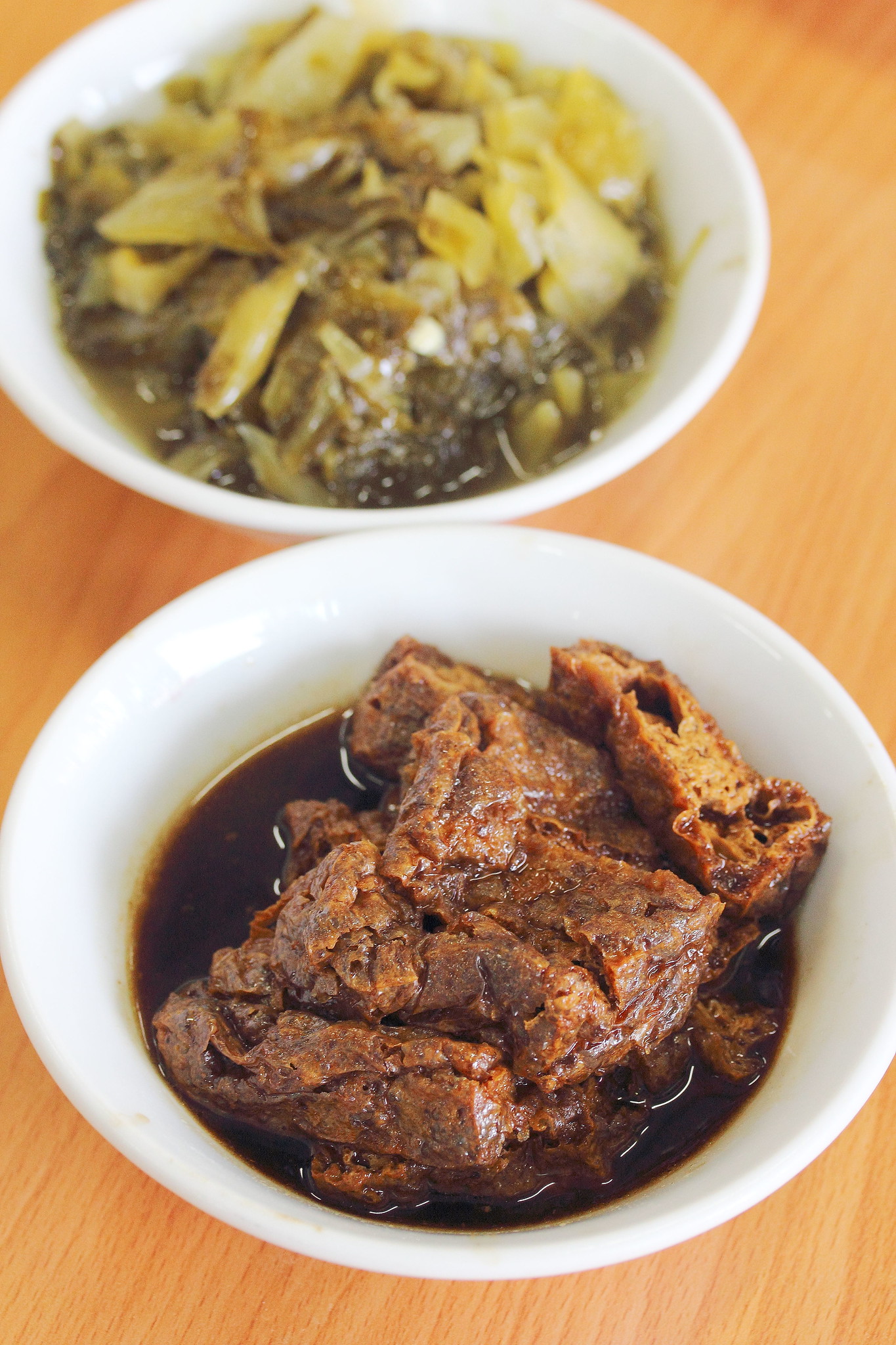 Besides bak ku teh, there are also some other side dishes offered at Lau Ah Tee Bak Ku Teh such as the Braised Tau Pok and Chai Buey. 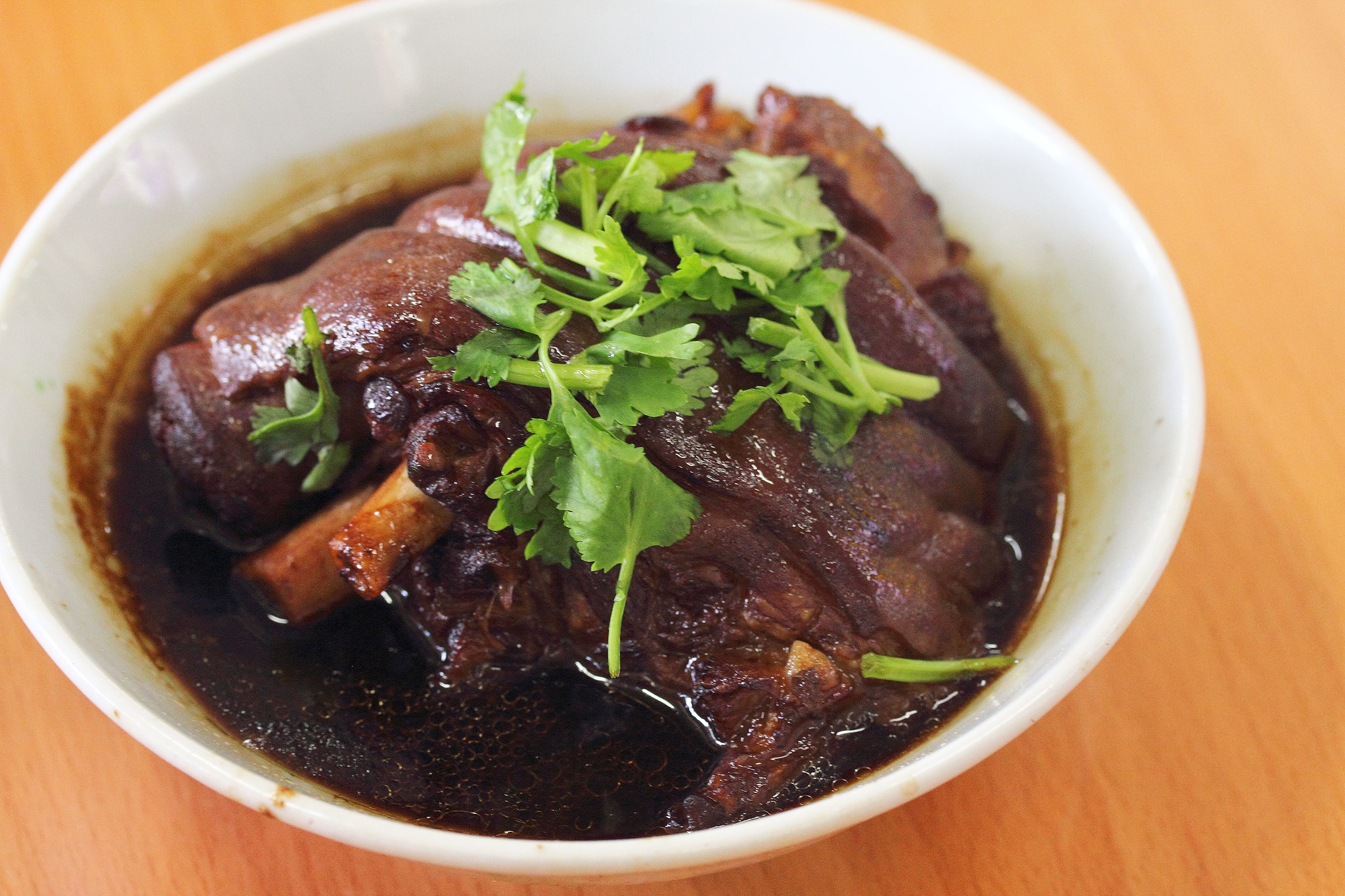 To be frank I find nowadays all bak ku teh stalla are too stingy with their serving portion of pork so I usually ended up ordering the Braised Pig Trotter. Maybe it is a scam after all to make us order and pay for more. Anyway I am not complaining as I love having braised pig trotter. The pig trotter at Lau Ah Tee Bak Ku Teh is well braised to a nice melted in the mouth texture with the light and savoury braising sauce. 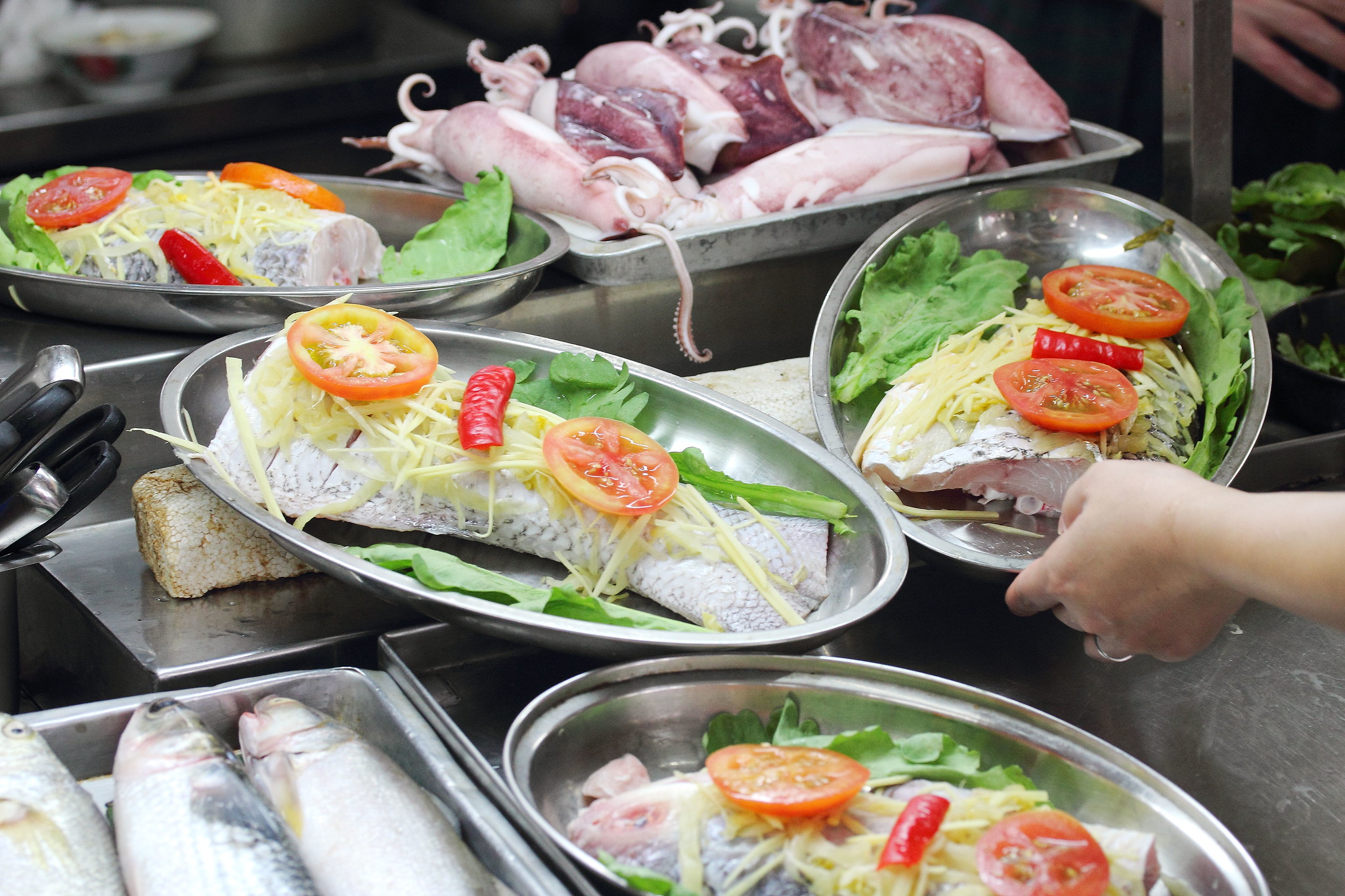 Different at Lau Ah Tee Bak Ku Teh compare to the other bak ku teh stalls elsewhere is the steamed fish and squid. These fresh catches are personally handpicked by Mr Sim from the market as early as 6am. 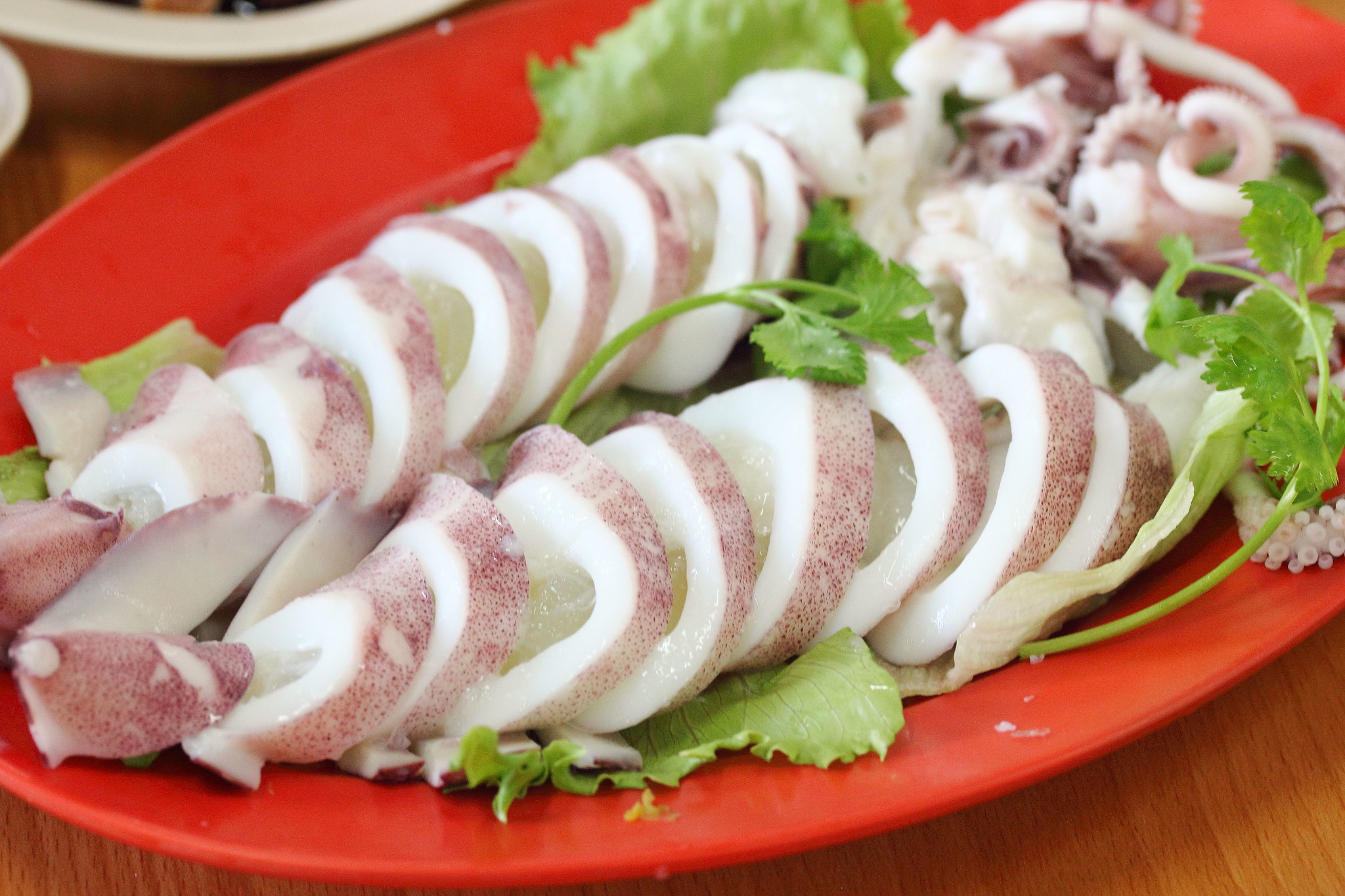 I was lost of words when the Steamed Squid was served. Don't fancy, just simple appreciation of the freshness. The squid was cooked perfectly having a very enjoyable springy bite. The jelly liked squid roe was a extra bonus completing the whole enjoyment. 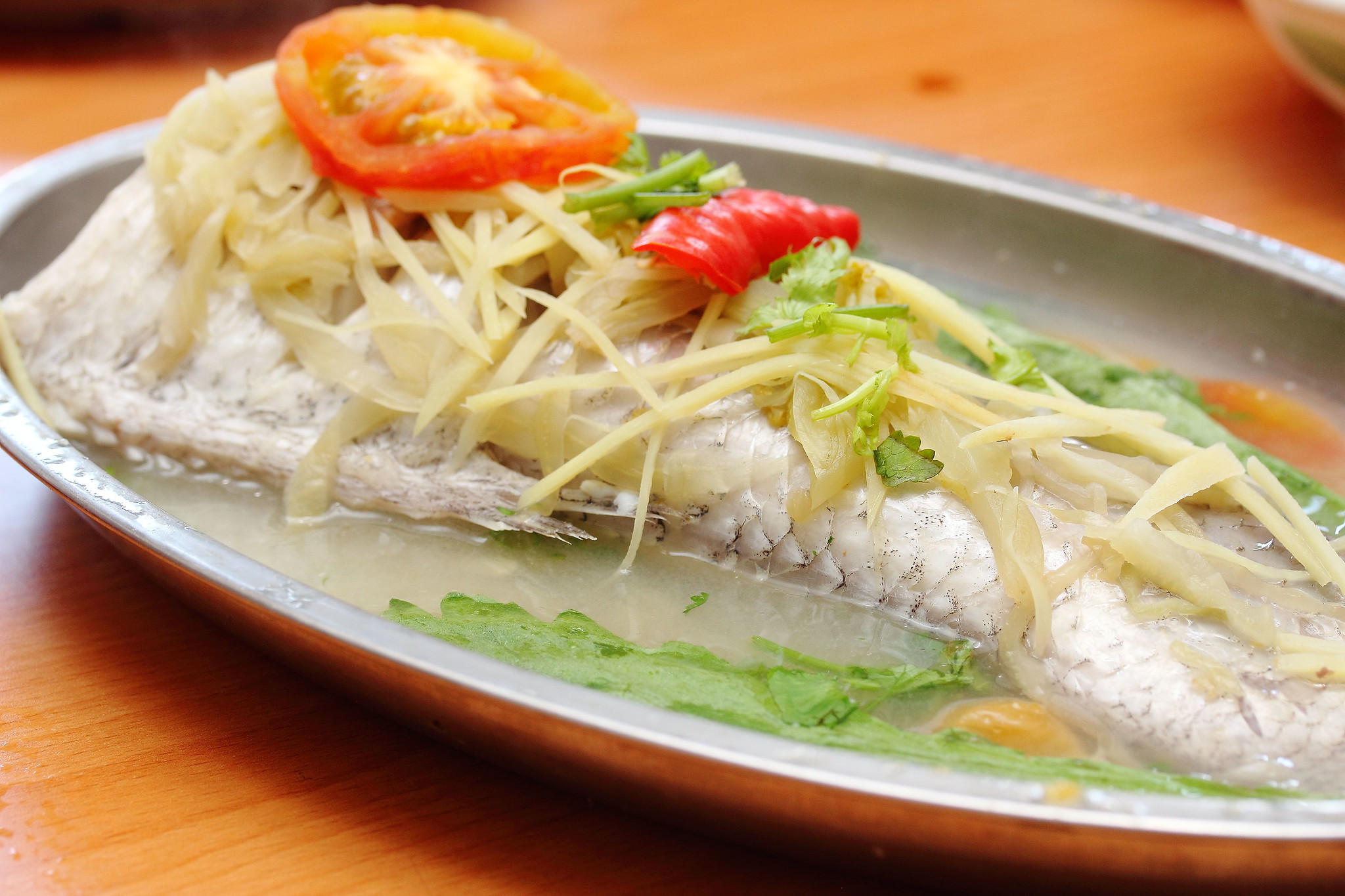 Being a Teochew, I love my Steamed Fish. The fish tail was steamed exactly how my family will cooked it. Once again nothing fancy, just some ginger, tomato, chilli and sour plum to lift the sweetness of the flesh but it was so good. The fish is Ikan Kurac caught off Tanjung Balai. 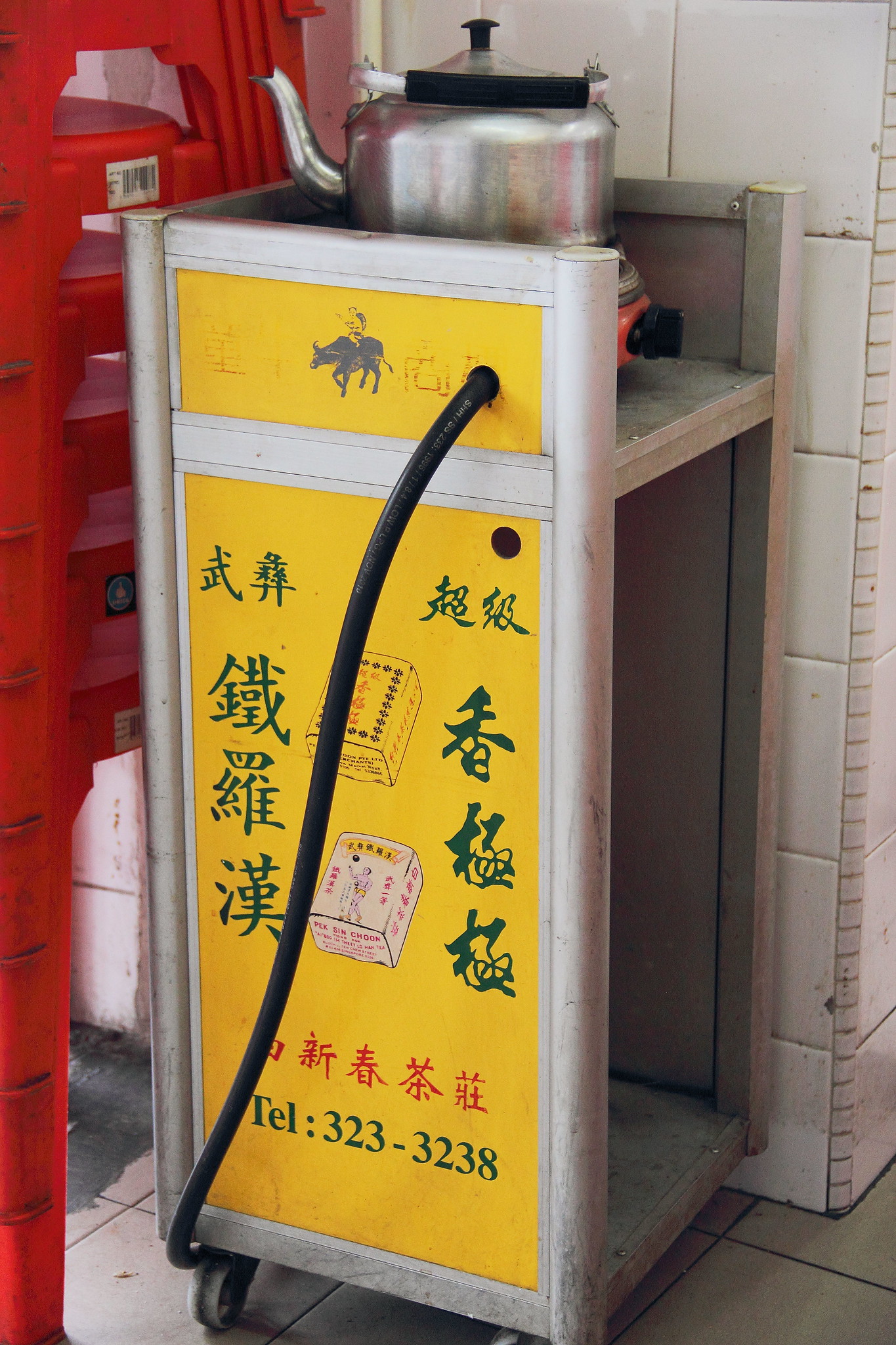 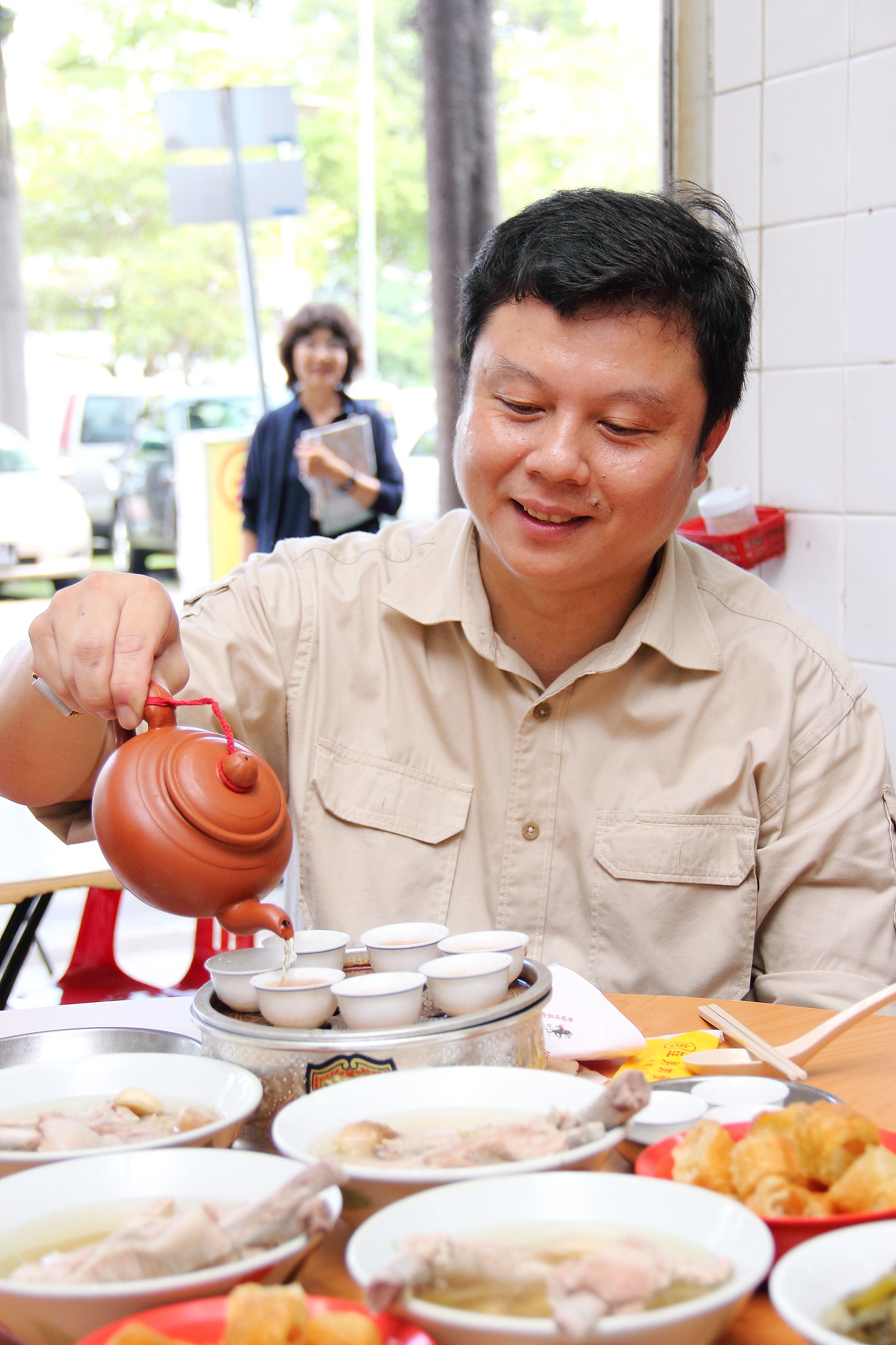 It was my honour to meet Kenry Pen the 4th generation owner of Pek Sin Choon since 1925. Pek Sin Choon is one of the oldest tea merchants in Singapore. You will find their paper wrapped tea packaging with the buffalo familiar as they supplied almost 80% of all the bak ku teh stalls around Singapore. 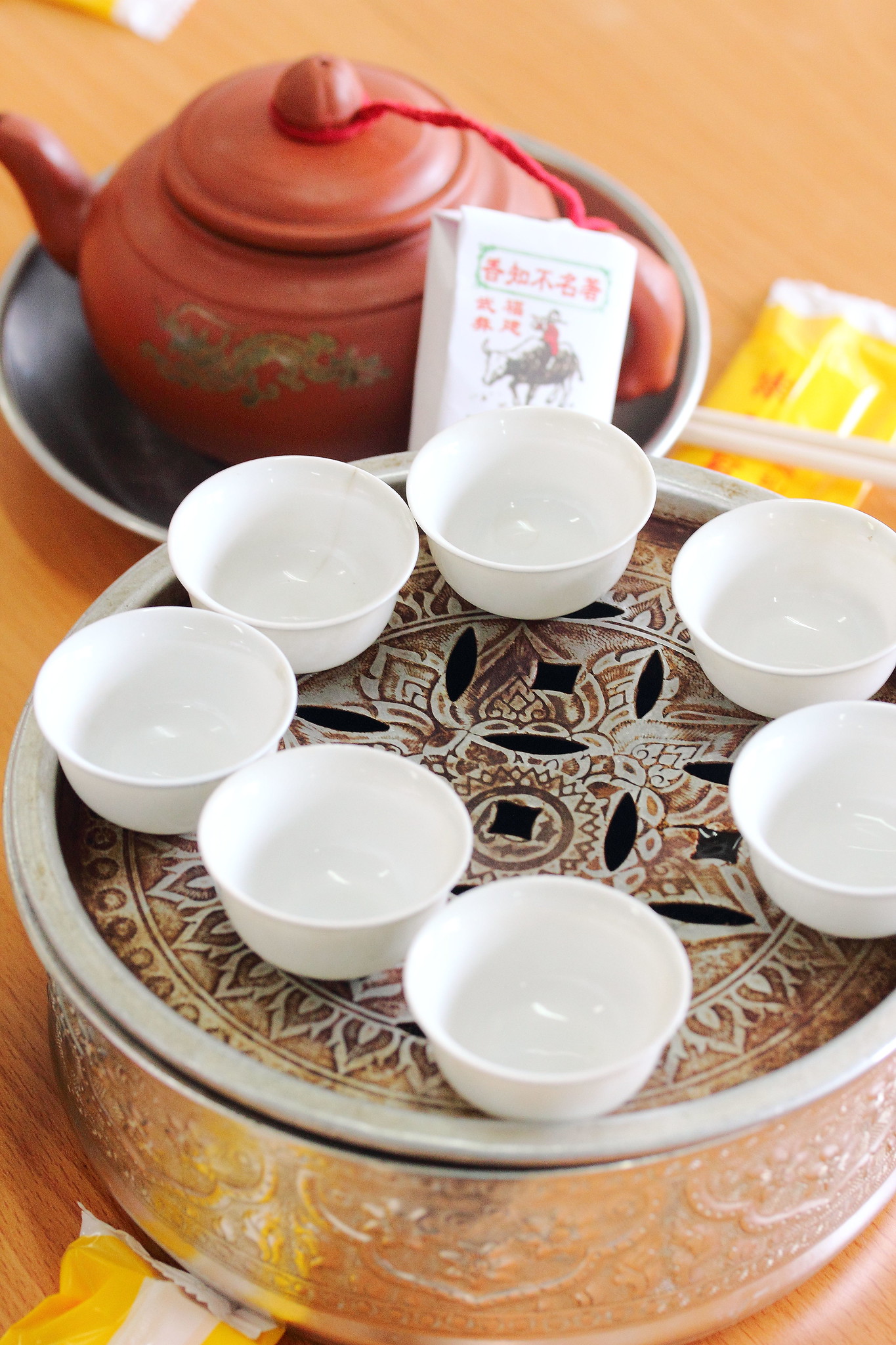 When I asked Kenry why people drinks tea when they have bak ku teh, his reply enlightened me. Apart from washing down that greasiness, tea drinking is all about connecting people. It got me thinking. It is probably similar to why European drinks wine. And at that very moment, I am connecting with Kenry over a meal of Bak Ku Teh and Pek Sin Choon's tea. I am glad that food and tea has allowed me to get to know a new friend as well as learning more about the root of our food heritage. 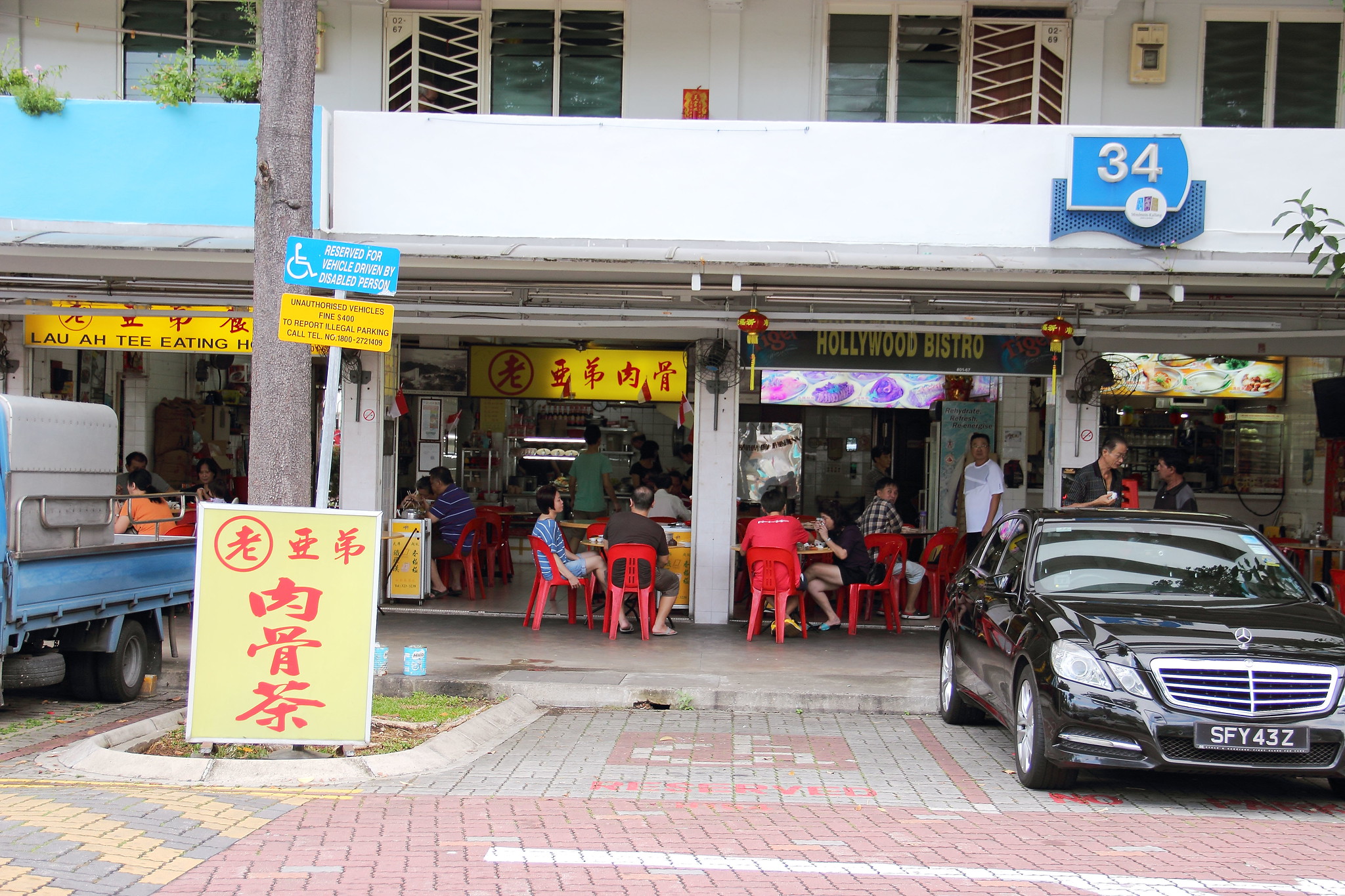 Lau Ah Tee Bak Ku Teh (老亚弟肉骨茶) may not be as popular compared to some of the Bak Ku Teh stalls out there but I can say that their bak ku teh is not second to these stalls. On top that, the offering of steamed fish and squid has given more varieties and choices to patron who wants something more or different.

Direction:
1) Alight at Boon Keng MRT station. Take Exit B. Walk to destination. Journey time about 3 minutes. [Map]
Posted by DerrickTan at 12:47 AM