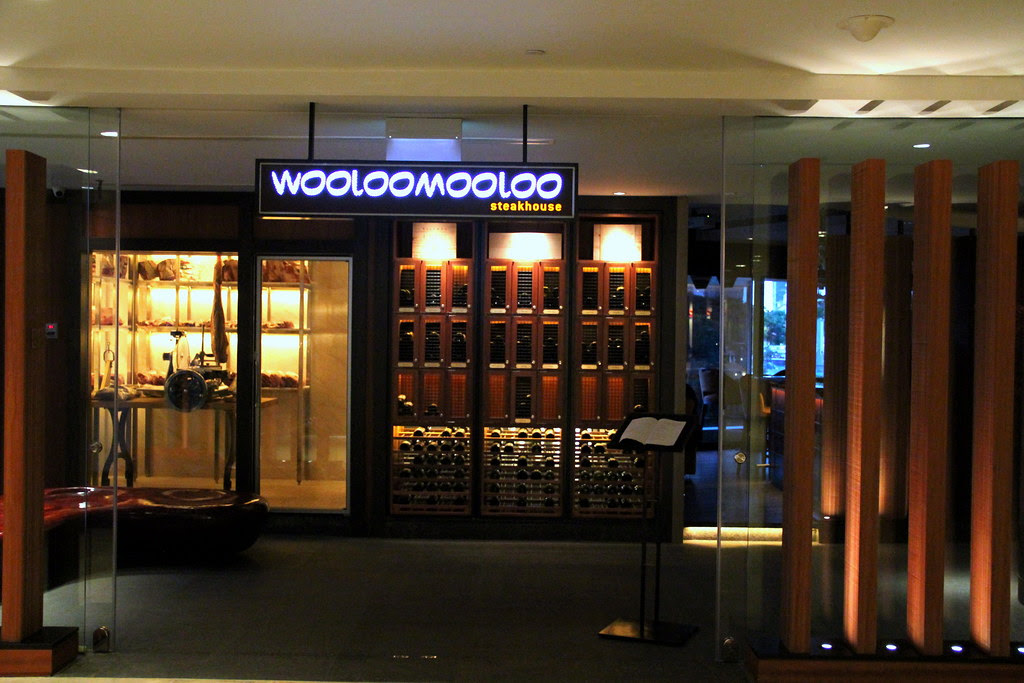 Wooloomooloo Steakhouse is an established premium steakhouse from Hong Kong that has 3 outlets at Lan Kwai Fong, Wan Chai and Tsim Sha Tsui. Taking its name from a bay side town in Sydney, Australia, Wooloomooloo Steakhouse Singapore is their first international outlet outside Hong Kong. It is situated in a stunning locale with impressive views of the city. Comprising 6,300 square feet of wining and dining space, the stylish restaurant promises a memorable dining experience with its premium steak selection, Australian-inspired offerings, as well as an outstanding range of wines and cocktails. 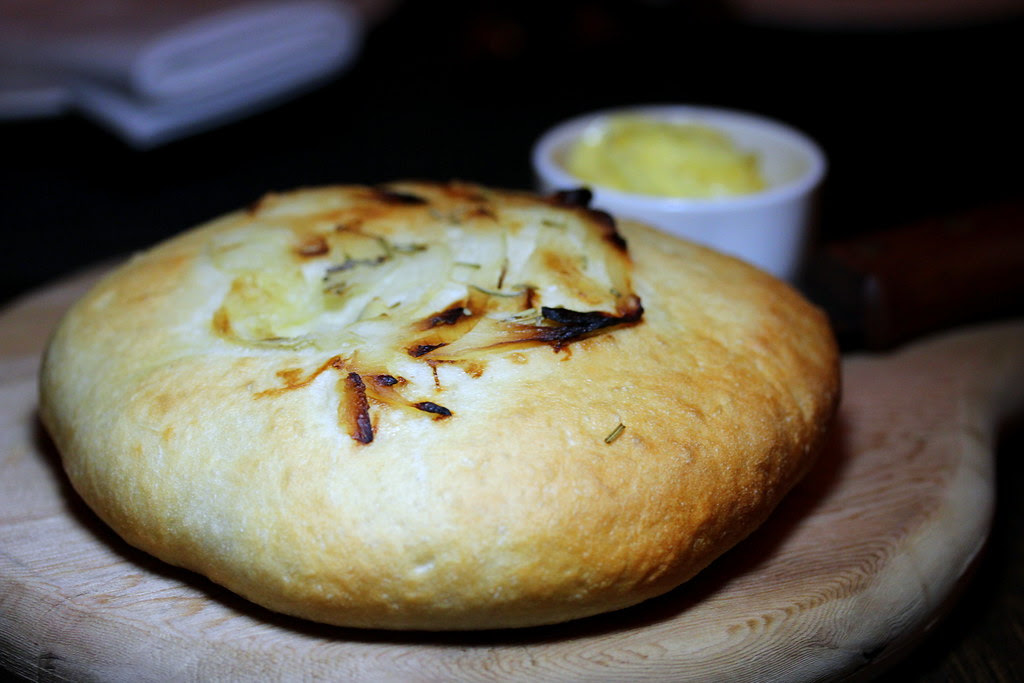 Upon settling down at the table, complementary freshly baked Focaccia with caramelised onions with whipped butter at the side was served. The focaccia was warm, airy and fluffy with a hint of rosemary. 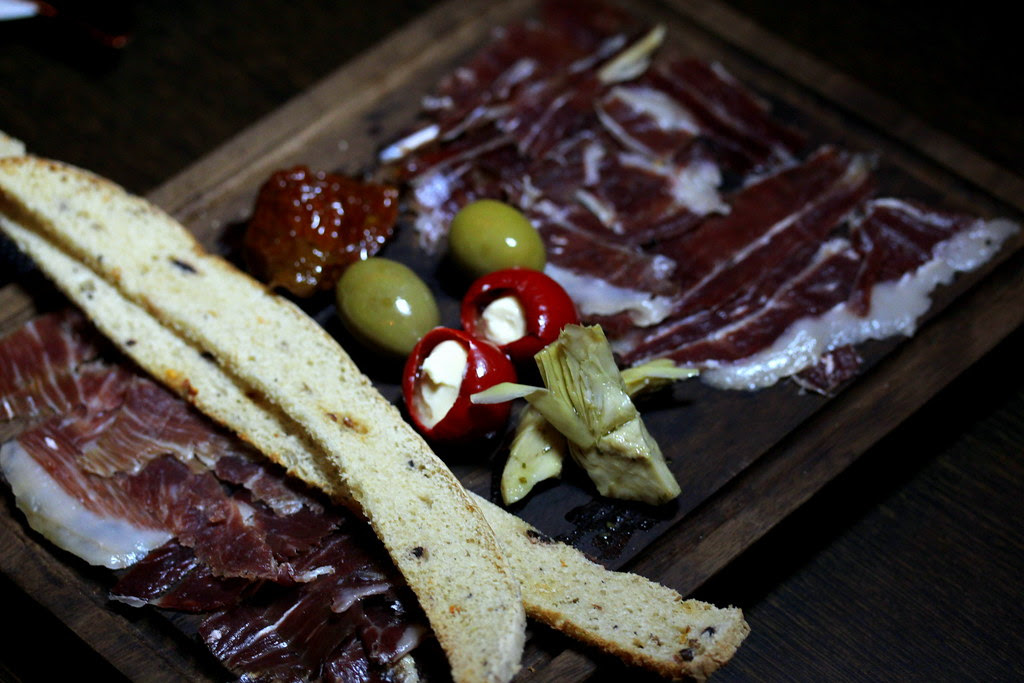 The Spanish Ham Selection ($38) came with both 20-24 months aged and 30-36 months aged Jamon Iberico, known as the finest ham in the world. The platter which is also available on the bar bites menu is served with sundried tomatoes, artichokes, olives, piquillo peppers, feta cheese and focaccia crackers. 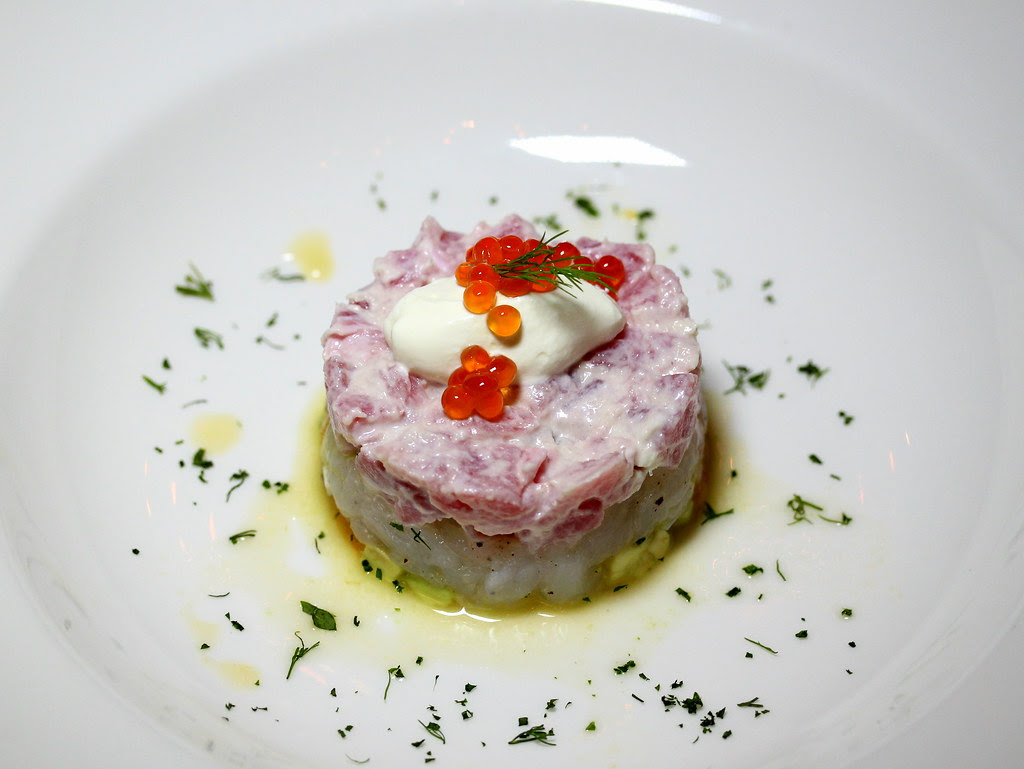 The Tuna and Spanner Crab Tartare ($29) has a base of creamy avocado cubes, tangy orange slices, diced shallots and coriander, and it topped with lightly seasoned sweet Australian spanner crab and sashimi-graded yellow fin tuna, finished off with a dollop of creme fraiche and salmon roe. The refreshing tartare had a nice balance of sweet and savoury. The salmon roe also provided exciting bursts of saltiness. 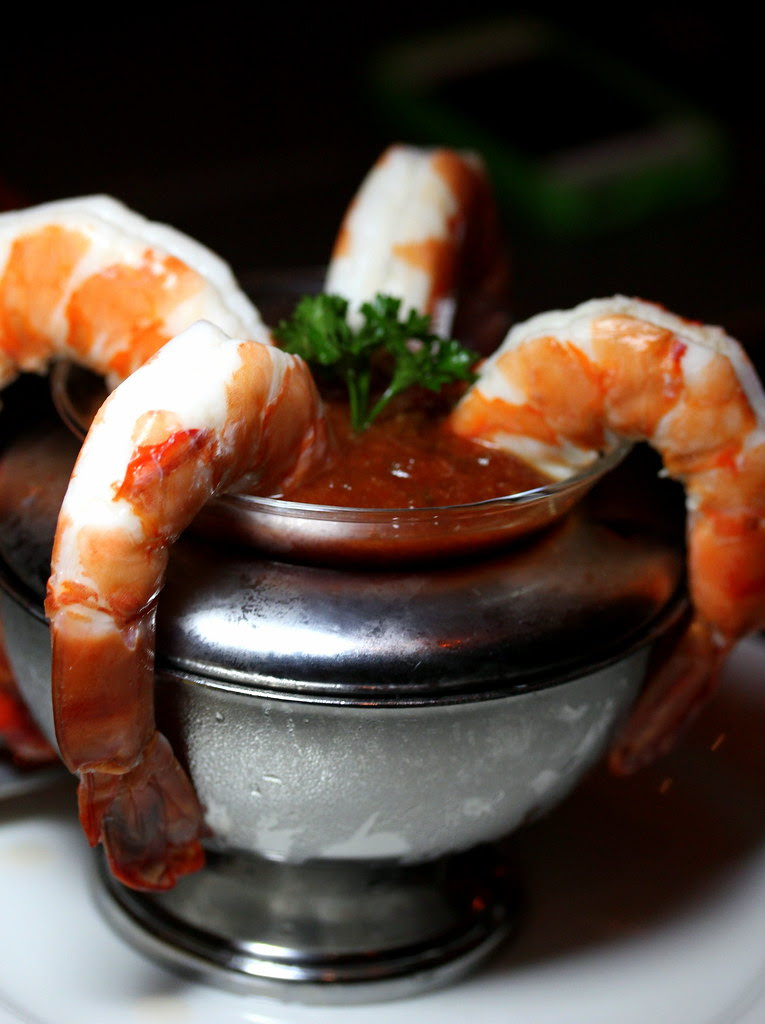 A hot favourite at Wooloomooloo restaurants in Hong Kong, the Jumbo Prawn Cocktail ($29) used fresh jumbo shelled prawns accompanied by a delectable homemade cocktail sauce of sweet chilli, horseradish and Worchester sauce. Huge for me may not be the best, the jumbo prawn's texture was firmer and tougher than norm which I don't really enjoy. 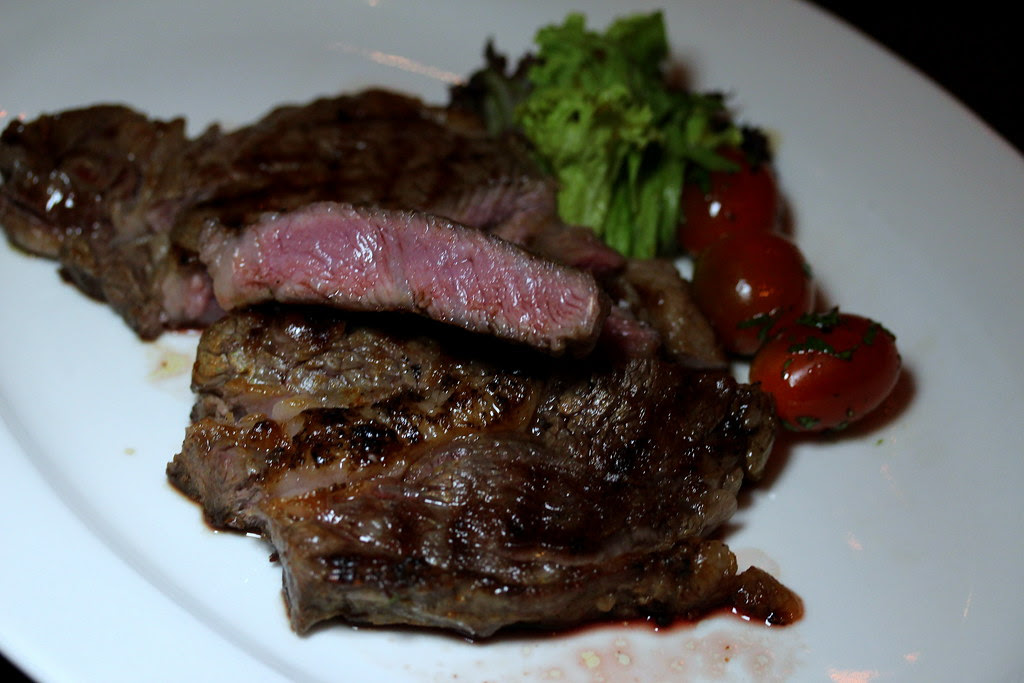 Before I go into the star item at Wooloomooloo, some facts from the butcher's block. Each cut of steak at Wooloomooloo is handpicked, cut in-house and prepared by eperienced hands. Each slab is flavoured with seasoned sea salt and broiled at 980 degrees Celsius inside the gleaming Southbend broilers from USA to attain the ideal medium-rare doneness.

The 150-day grain-fed, wet-aged Ribeye Steak (12-ounce $74) definitely was the brightest star of the night. I remembered exchanging glance with Jacob (www.cooksnapeatlove.com) who like me has tried the Ribeye at Ruth's Chris Steak House, the ribeye steak brought a smile to our face. The Ribeye Steak at Wooloomooloo was extremely flavourful and succulent. 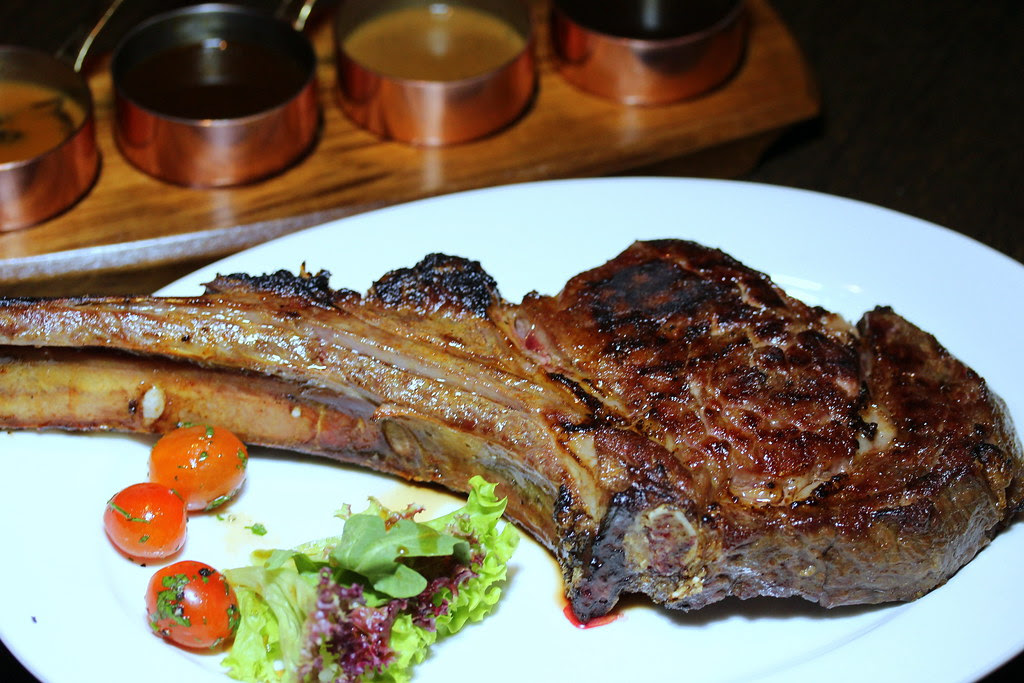 The 70-day grained-fed, wet-aged, young Black Angus cut is thus named for its resemblance to a Native Amercian Indian battle axe or tomahawk. I felt that it looked more like a baseball bat. That is how gigantic the Black Angus Tomahawk ($125) is. The massive whole rib steak weights a good 1.1kg to 1.3kg with bone in and is served medium rare after 20 minutes in the broiler.

I can understand the difficulty in cooking such a big pieces of cut. The doneness was rather inconsistent. Since the huge portion is meant to be shared, maybe it will satisfy the different preference of doneness for the table. The meat was weak in flavour and texture was rather chewy. I would prefer the ribeye more than the tomahawk. 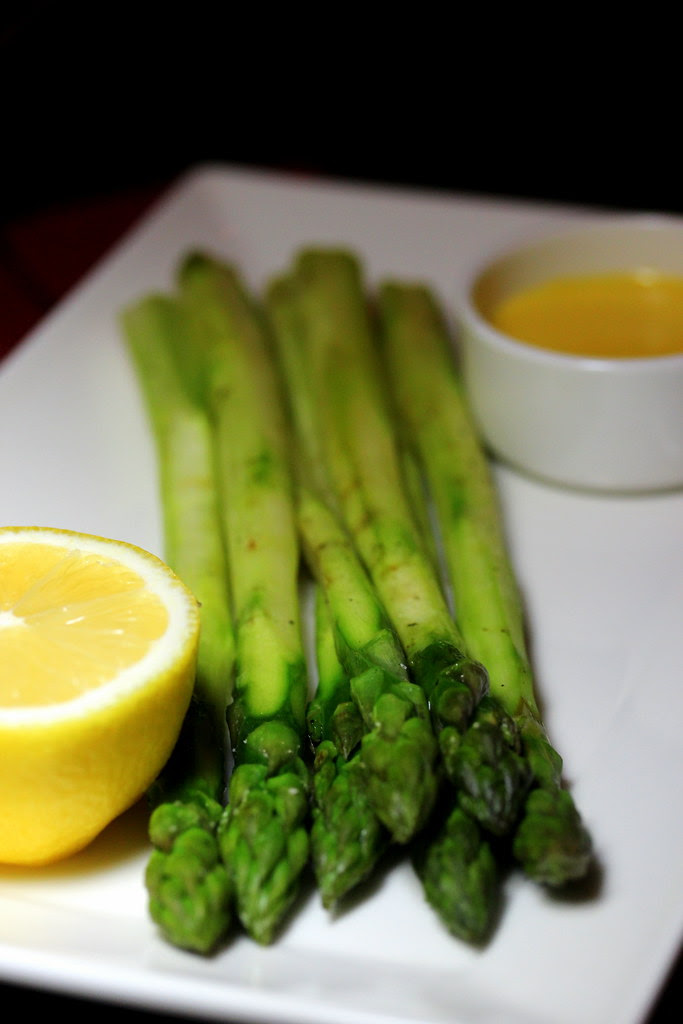 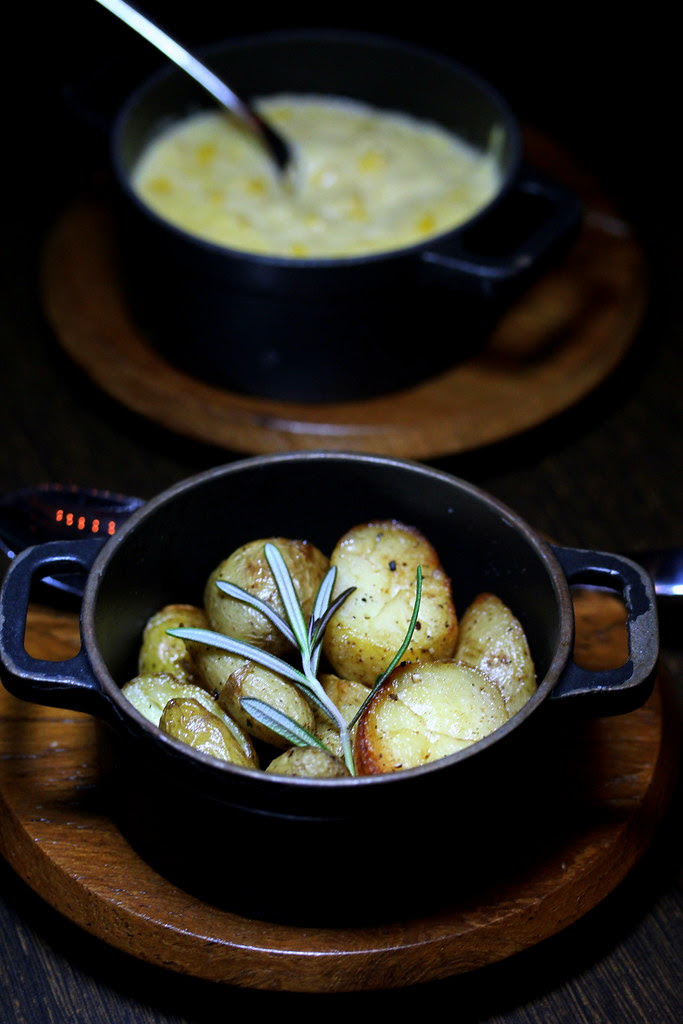 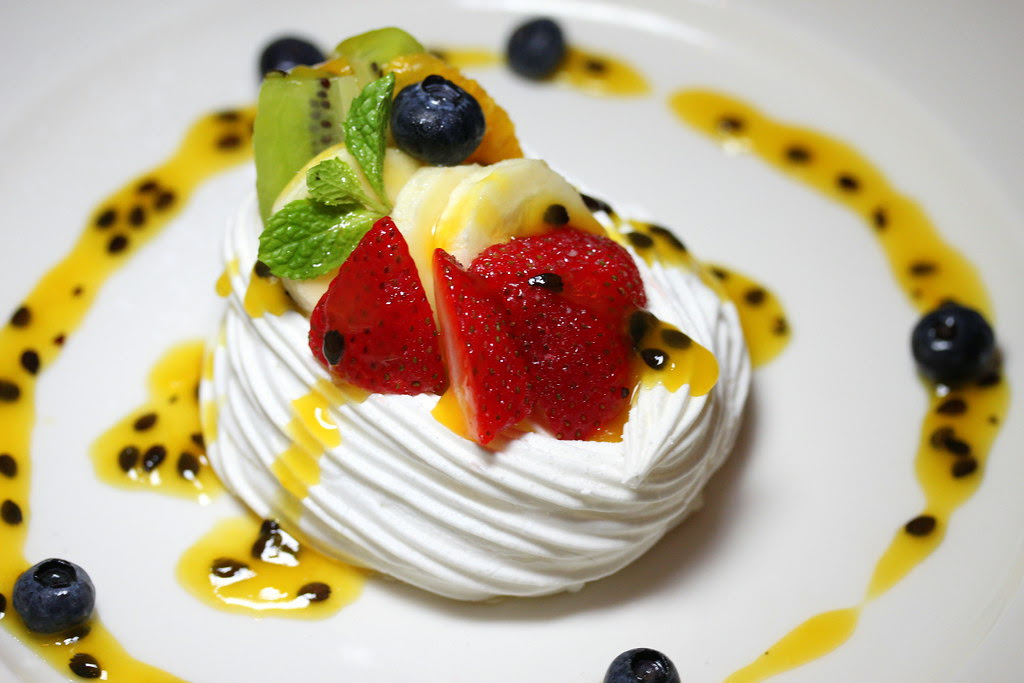 Wooloomooloo offers 11 desserts on their menu. There wasn't much room left to indulge in all the 11 variety of desserts. Nevertheless I still got my sweet fix in the Pavlova ($18) with Chantilly Cream. This is my first time having the meringue-based dessert. Love the crisp and crunchy outer crust and soft, moist marshmallow like centre. 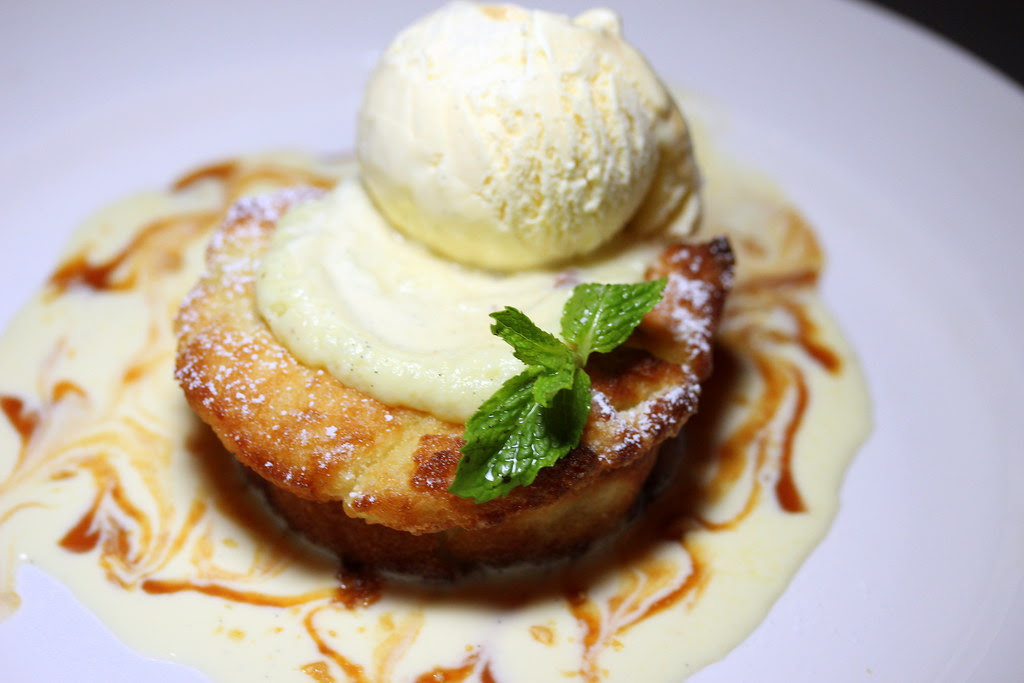 The Bread and Butter Pudding ($16) came with freshly baked vanilla bread pudding, pastry cream, homemade praline and a scoop of vanilla gelato. A lovely dessert to end the night with a sweet note.

Wooloomooloo Steakhouse has an inviting, relax and casual ambience although it is labelled as a premium steakhouses. Besides the steak which I understand some people does not take beef, the restaurant also offers other scrumptious selection including specialities such as Pan-Seared Barramundi Fillet ($52), Grilled Tasmanian Salmon Fillet ($56), Roasted Spatchcock Chicken ($46), Ricotta & Spinach Ravioli ($34) and Australian Lamb Cutlets ($56). As you can see, there is something for everyone and the restaurant is not just about steak.