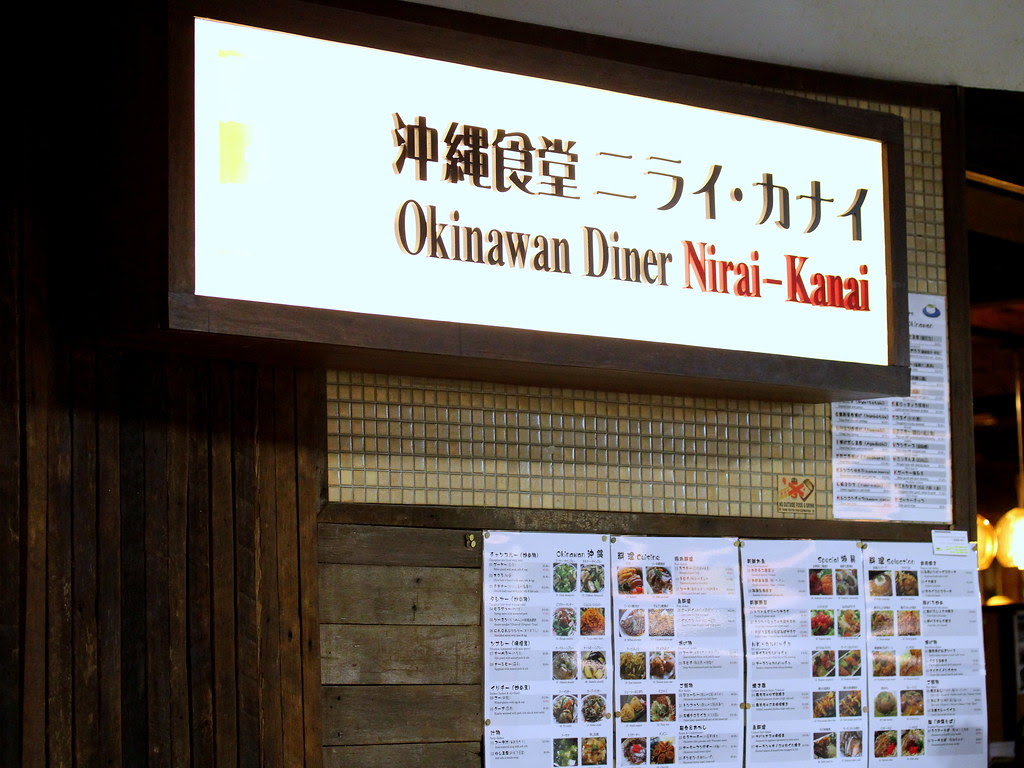 Back in July 2012, I blogged about my Japanese Gourmet Journey at Liang Court Shopping Court with my girlfriend and lovely friends (Celes, Charlene and Zhihao). It was a long and tiring day. We were all famished by dinner time. It didn't help when the restaurants we wanted to visit were all full and we needed to wait for a table. 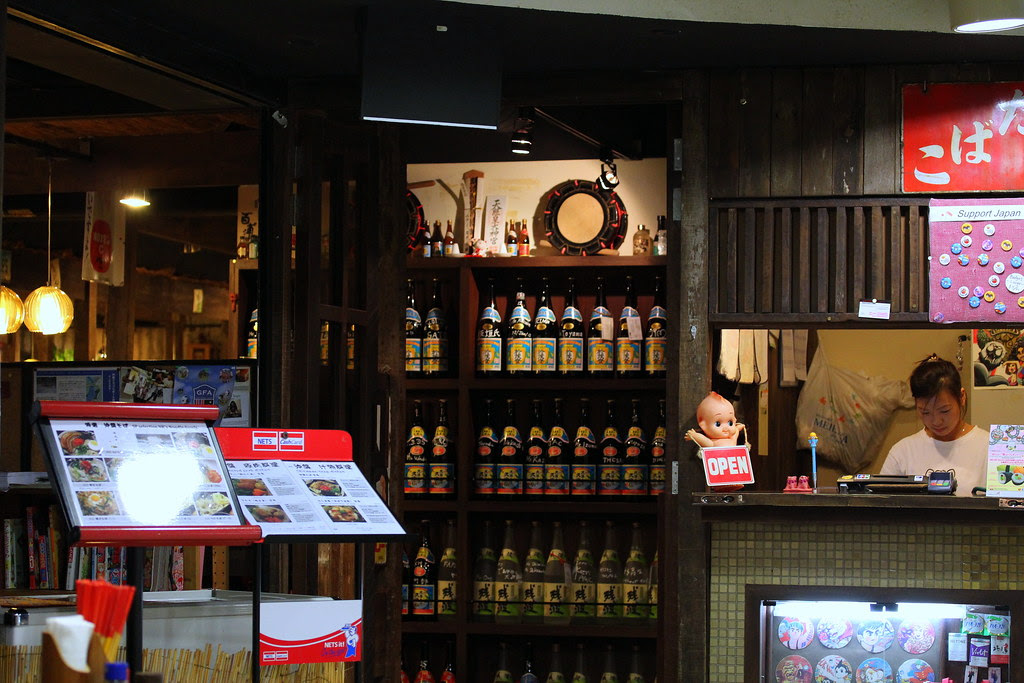 Cutting the story short, we ended up dining at Nirai Kanai Okinawan Restaurant. I have recently watched a food documentary show and I got to know that Okinawan cuisine has a lot of influence from the Chinese and Southeast Asian cuisines due to trade in the early dates. In addition, due to the difference in culture, climate, vegetables and other ingredients between Okinawa and mainland Japan, Okinawan cuisine is different from mainland Japanese cuisine. 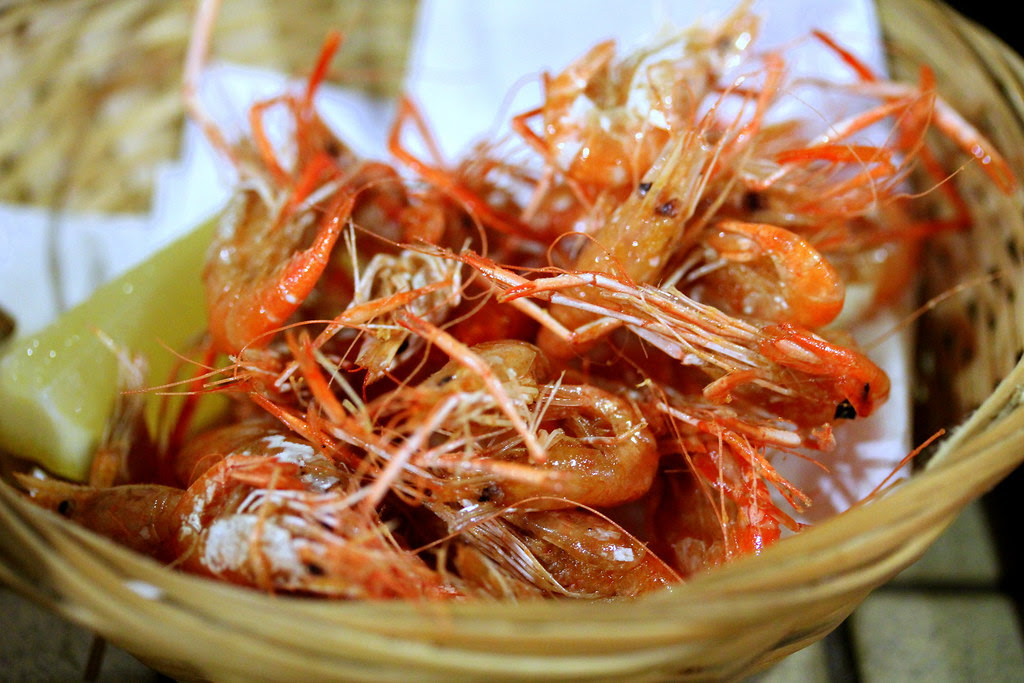 We started with some bites and starters while we waited for our mains to be served. The Crispy River Shrimp ($8) was suggested by Zhihao who has it before. Really interesting crispy bites with a tad of saltiness. Be warned to be careful while eating these. I was not careful and the claw got stuck into my gum and I have a hard time removing it. 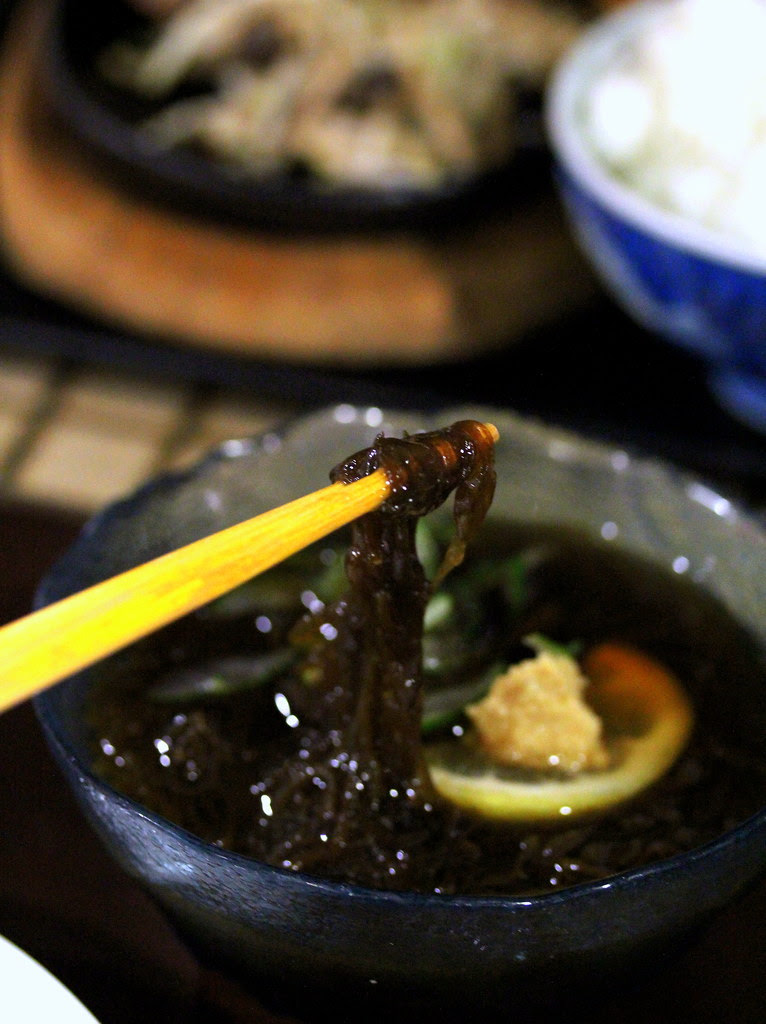 Initially I wanted to try the Green Caviar Seaweed or known as Sea Grapes but they did not have stock that day. Hence we ended up having the Vinegared Mozuku Seaweed ($8). The seaweed was a refreshing starter for a beautiful meal waiting for us. 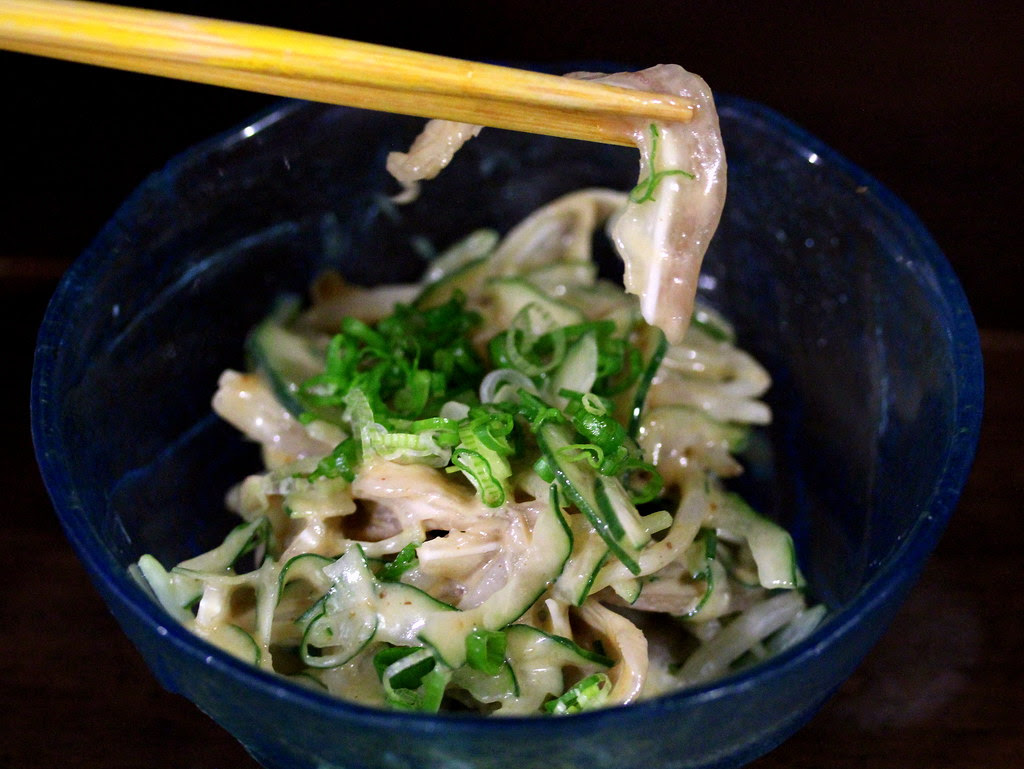 The Pig's Ear with peanut dressing ($8) was my favourite starters among the three. The delectable dressing accompanied with the crunchy texture was really enjoyable. 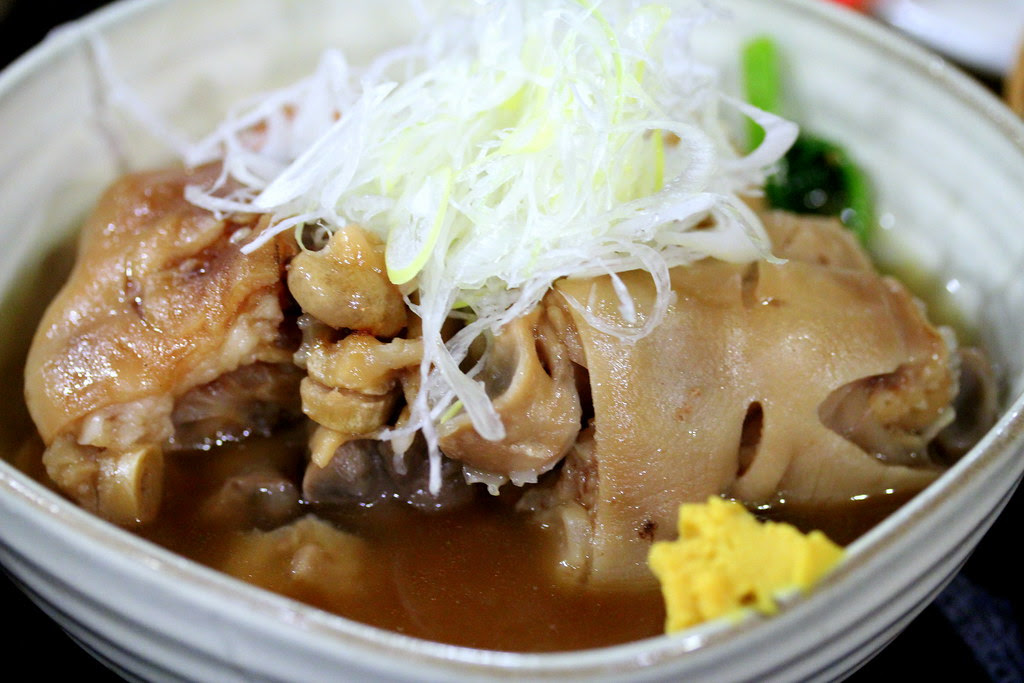 As I mentioned we were famished, so all of us went for the set meal which came with our individual mains plus plain rice, soup, vinegared vege dish, fried meat miso and peanut beancurd. I had the Tebichi, Simmered Pork Knuckle set meal ($17++) which was packed with collagen. It was rather "gelat"   (Malay expression to denote extreme weariness and irritation at repetition) if you are just having it alone without other sides. 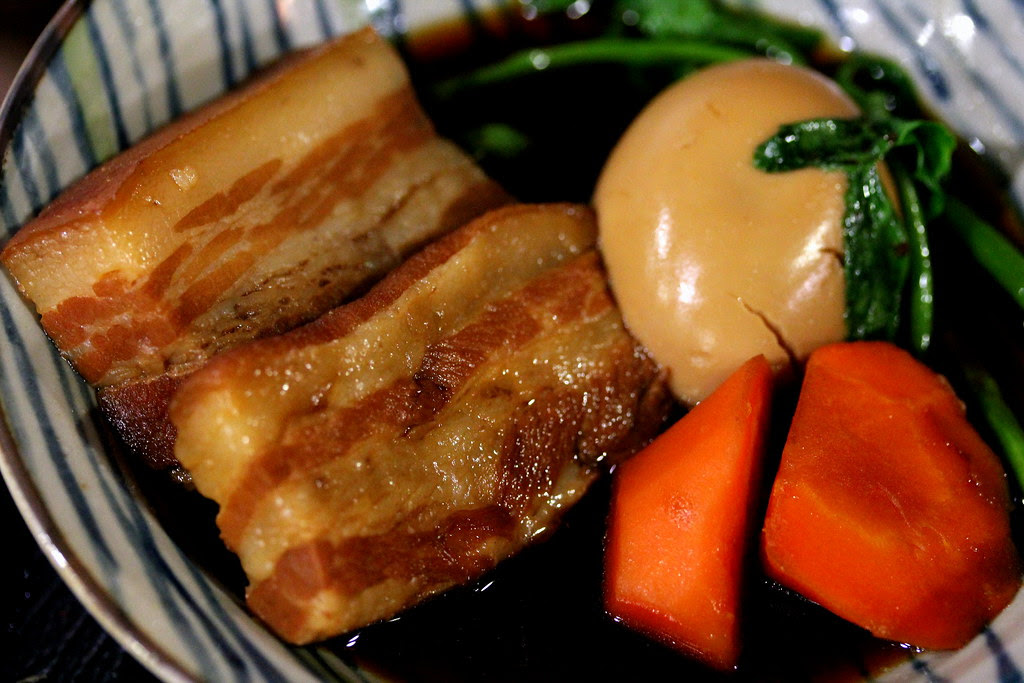 Charlene and my girlfriend had the Rafute, Simmer Pork Belly set meal ($17++). The melted in the mouth pork belly was simply "oishii". As you can see, the dish has the influence of Chinese cuisine which is similar to our braised pork belly. 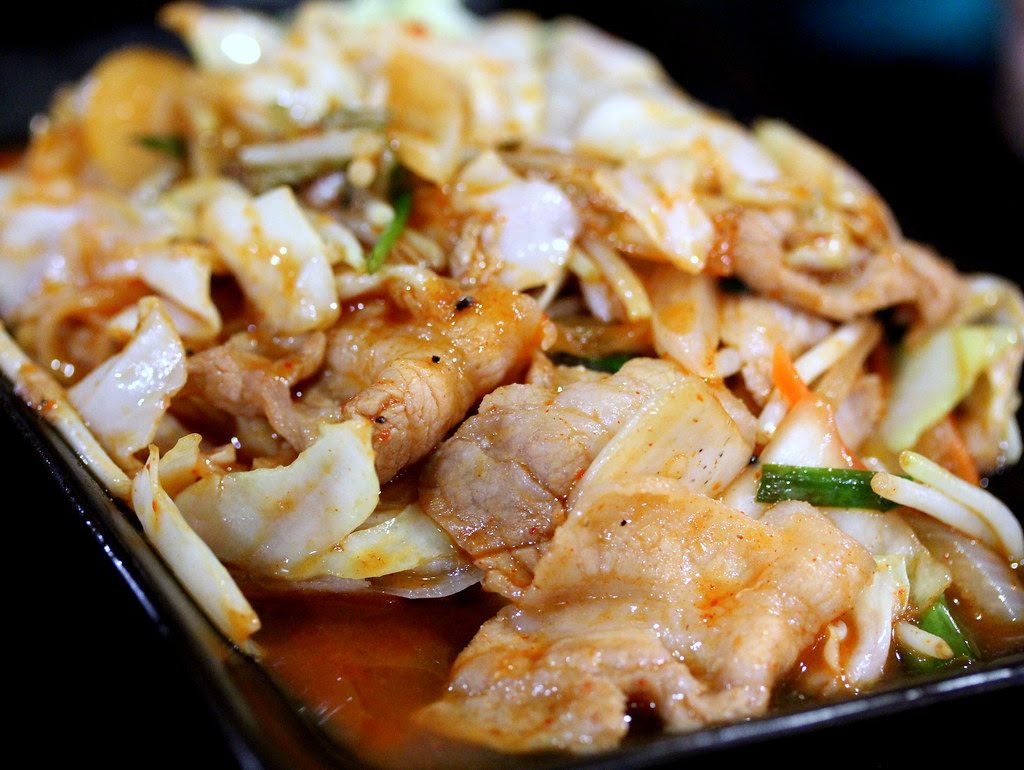 For Southeast Asian influence in Okinawa cuisine, we can see from the Buta Kumuchi, Pork Belly with Kimchi set meal ($15.30++) which Zhihao had. 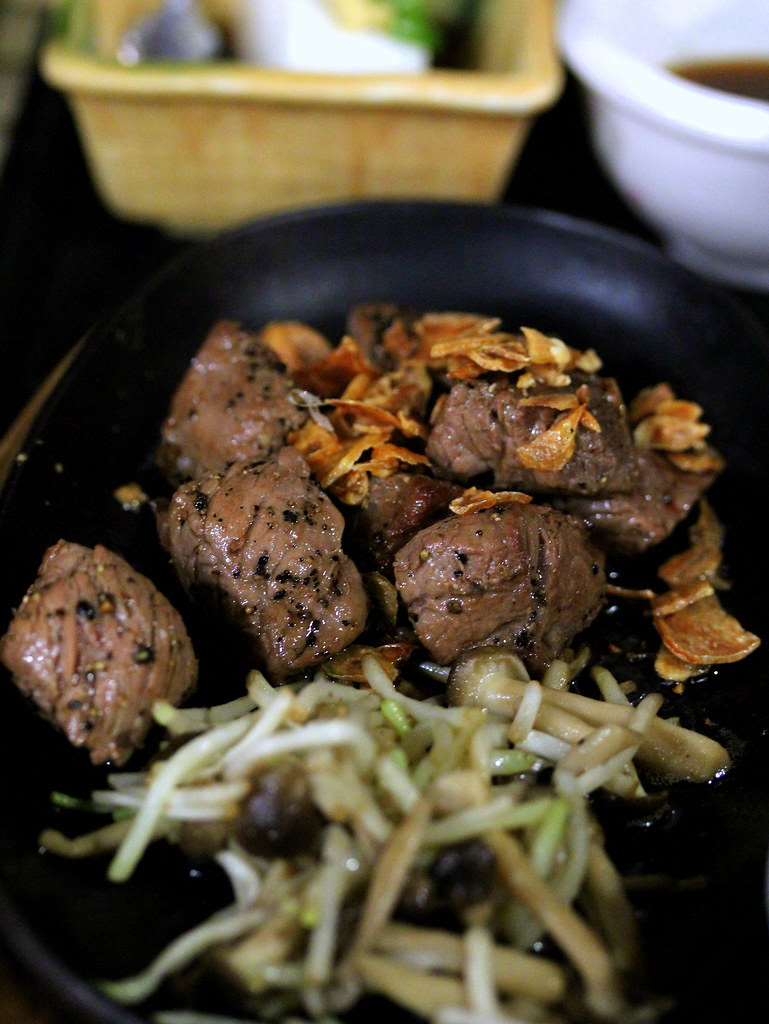 Celes is the only one in the group that did not order pork for dinner. She order the Gyu Saikoro, Cubic Beef Steak ($18.70++). The beef cubes were succulent, tender and flavourful.

2) Alight at Clarke Quay MRT station. Take Exit C, F or G. Walk along the river toward Riverside Point direction. Cross the bridge to the other end of the river. Turn left and walk towards Liang Court. Journey time about 10  minutes. [Map]

Posted by DerrickTan at 2:14 AM