The two Bak Chor Mee stalls at Block 85 Bedok North are very popular and well known but I have never tried it. I was at the Worker Party's rally at Bedok Stadium for the East Coast GRC and decided to check out the stalls for supper since I was nearby.

It took me quite a while to decide which Bak Chor Mee stall to patron. Both stalls are side by side and had long queues. I decided on Xing Ju Rou Cuo Mian because of the 3 letters "老字號". 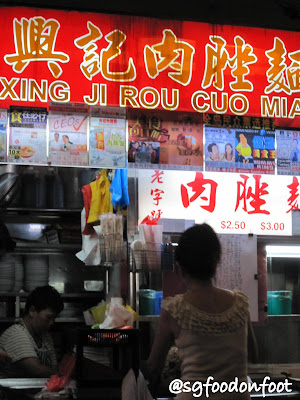 I have to wait 45 minutes for my bowl of Bak Chor Mee Soup! The stall only sells the soup version which came with minced meat, meat balls and cut red chilli. The noodles were Q and springy. The meatballs were firm and nice. The soup was slurping good too. The disappointment was the minced meat. I find it too fine and could not taste them in the bowl of soup.

I enjoyed having the cut red chilli with the noodles and asked for more. Initially I was worried that the stall owner will not be happy that I asked for more than what was given. However the lady I approached at the stall was very nice and asked me to help myself to them. 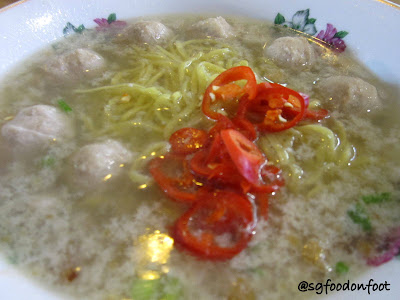 Bak Chor Mee Soup 4/5
To get here, take bus number 222 from Bedok MRT station and alight 5 stops later. Walk to Fengshan Market and Food Centre which is 190m away.


View Larger Map
Posted by DerrickTan at 2:26 AM