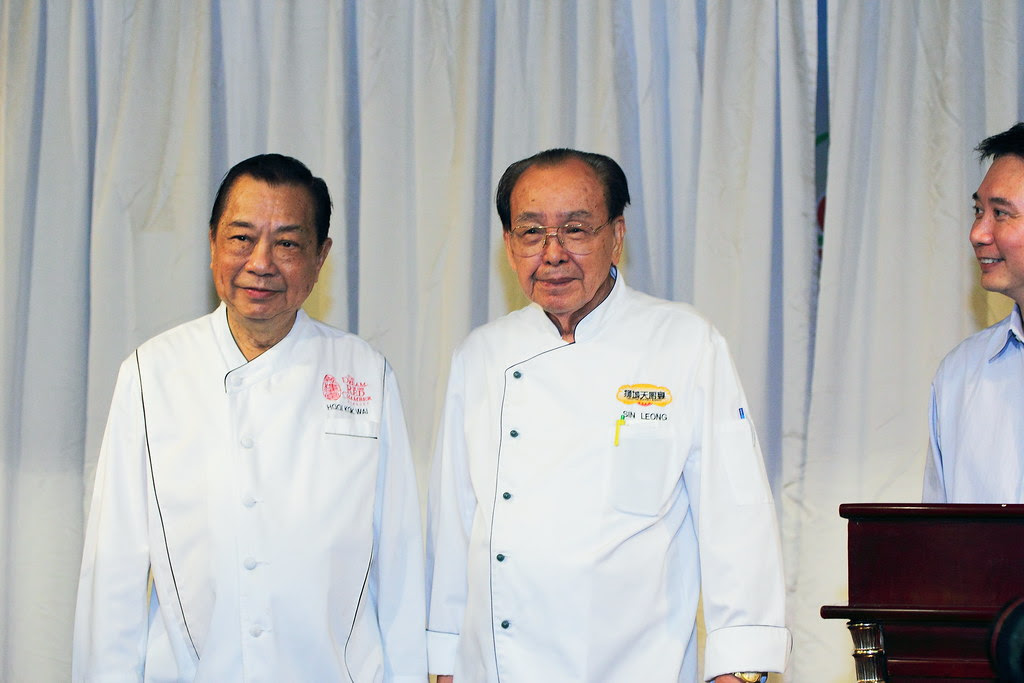 For the month of September 2013, Makansutra held its biggest ever Makan Dinner in their 12 years of organising this monthly makan session at Red Star Restaurant. I understood the overwhelming response because we were at Red Star to indulge in a 9 course dinner specially put together by the remaining 2 of the Four Heavenly Kings of Chinese Cuisine, Chef Hooi Kok Wai and Chef Sin Leong. 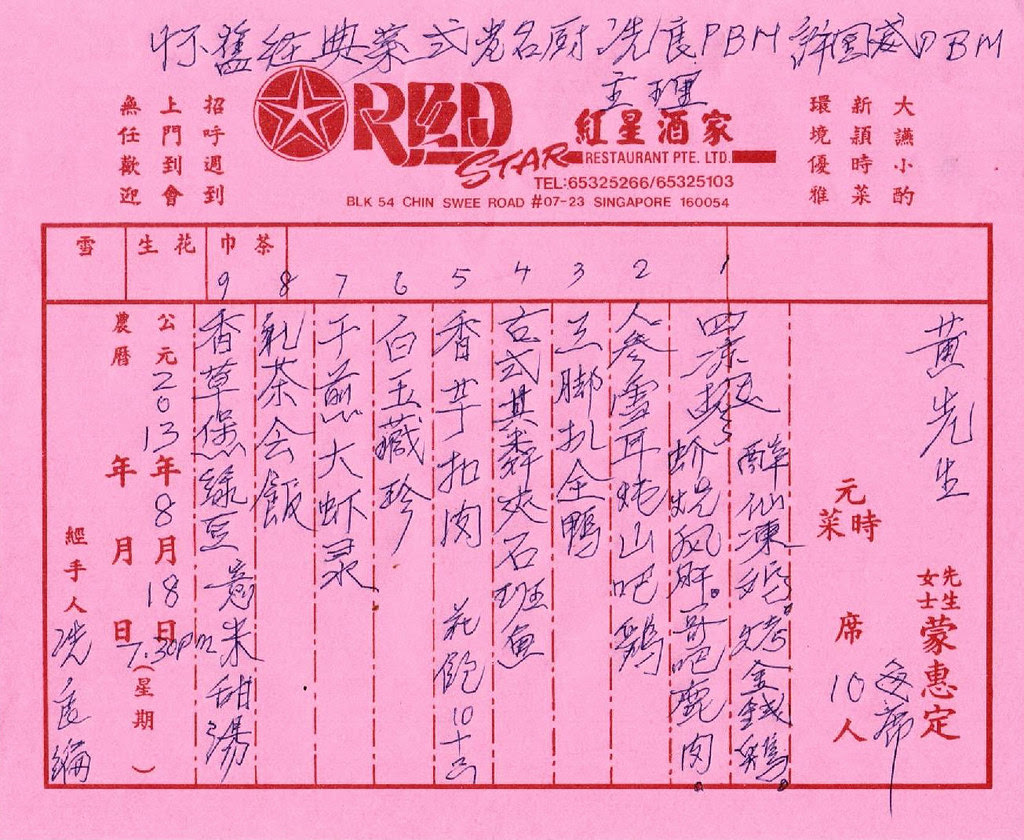 This is the menu for the night. The 9 course dinner showcases the classic Cantonese dishes back in the 1960s that are not commonly serve in restaurant nowadays. 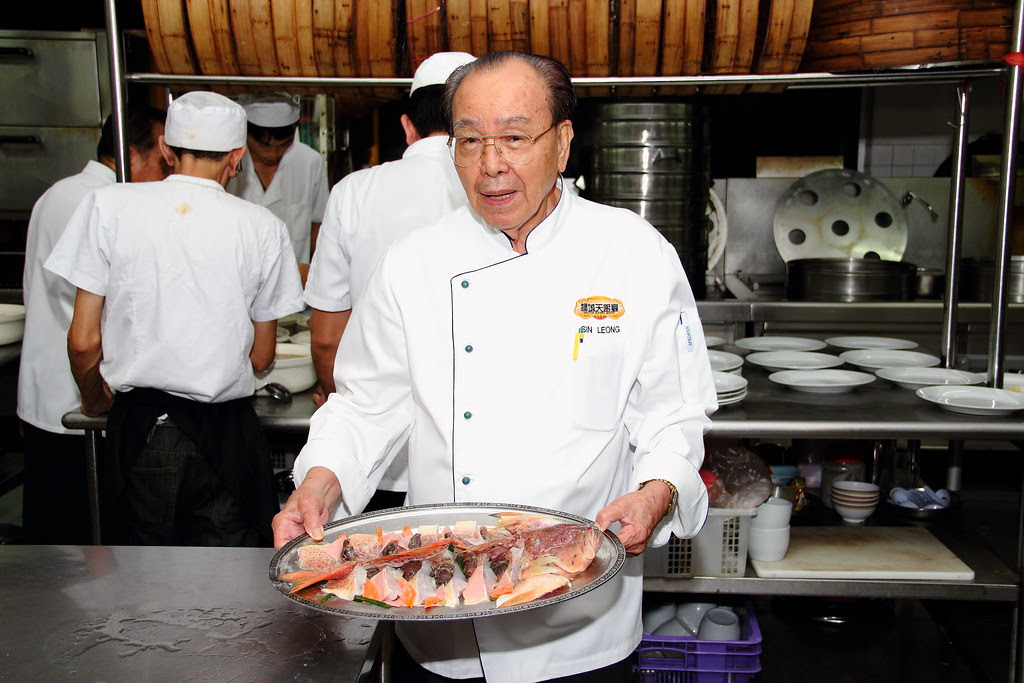 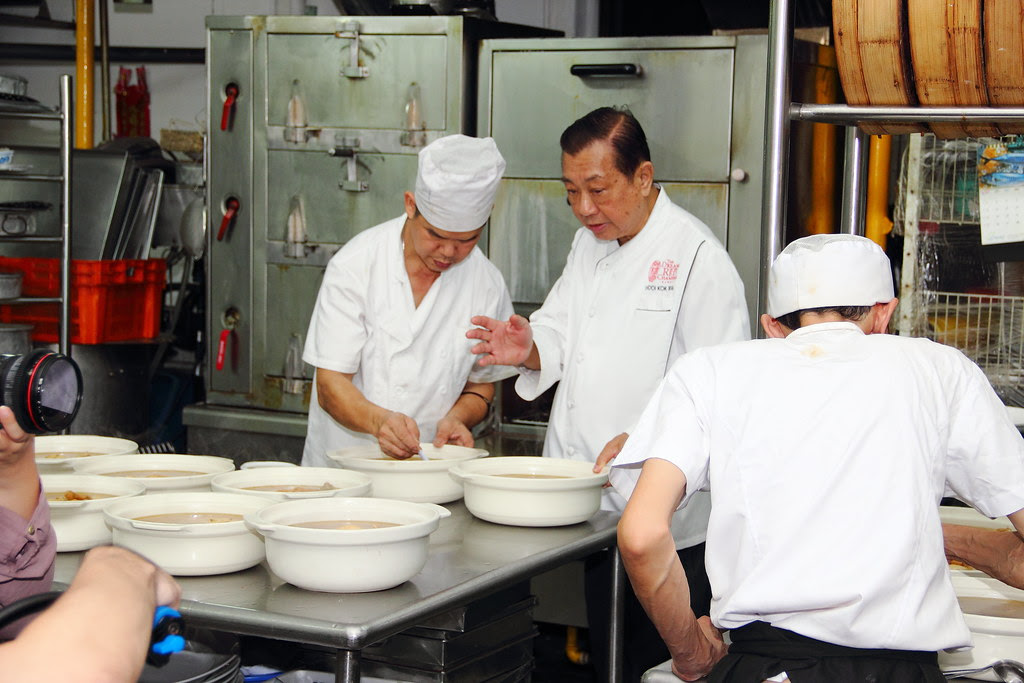 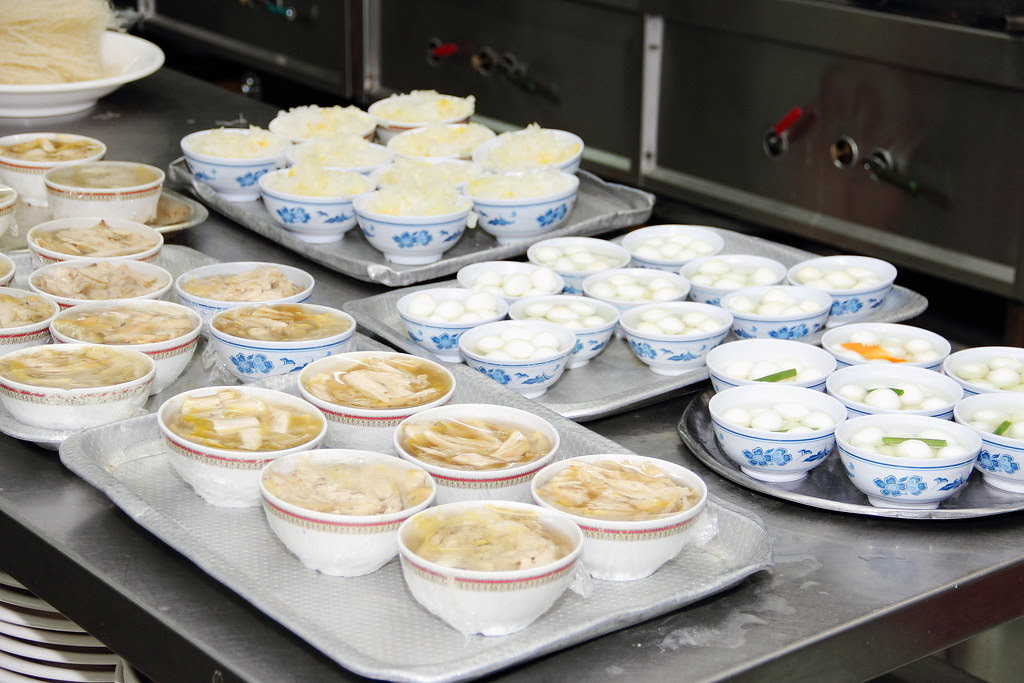 We were also very fortunately to be allowed into the kitchen and experienced first hand the 2 Master Chefs in their near 80s meticulously checking the preparation and cooking of the food for the night. 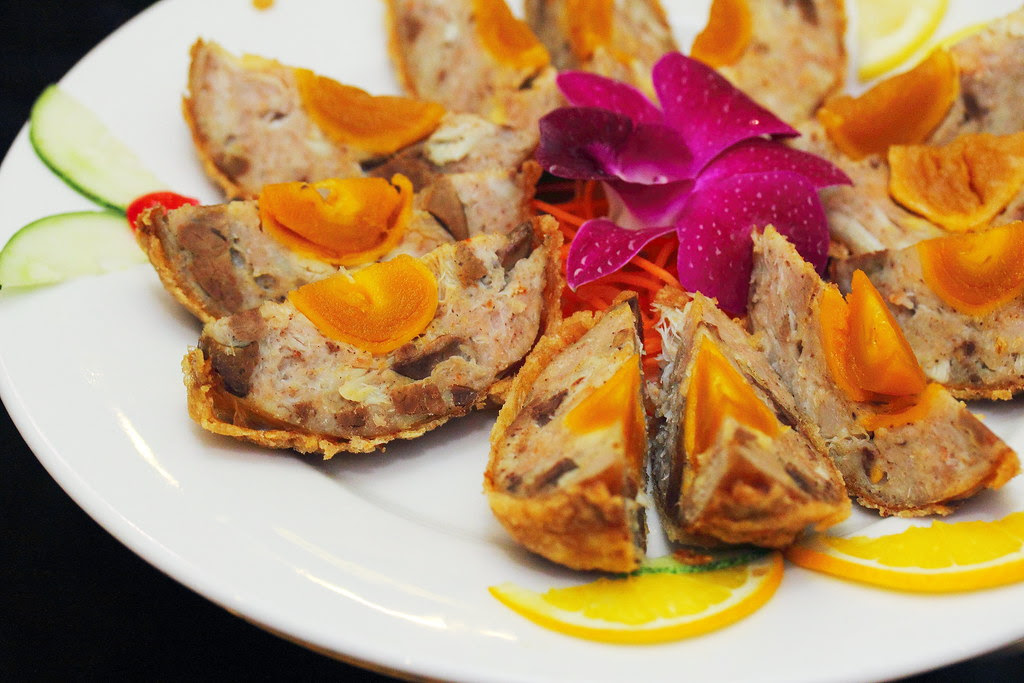 The Deep Fried Chicken Liver with Pig Caul is a tedious dish to make. It is not a surprise that it is rarely being offered in restaurants nowadays. I can appreciate the labour behind the dish in assembling all the components of the dish to together. Being a fan of innards and salted egg, the dish definitely hits the soft spot of me with its flavour and texture. 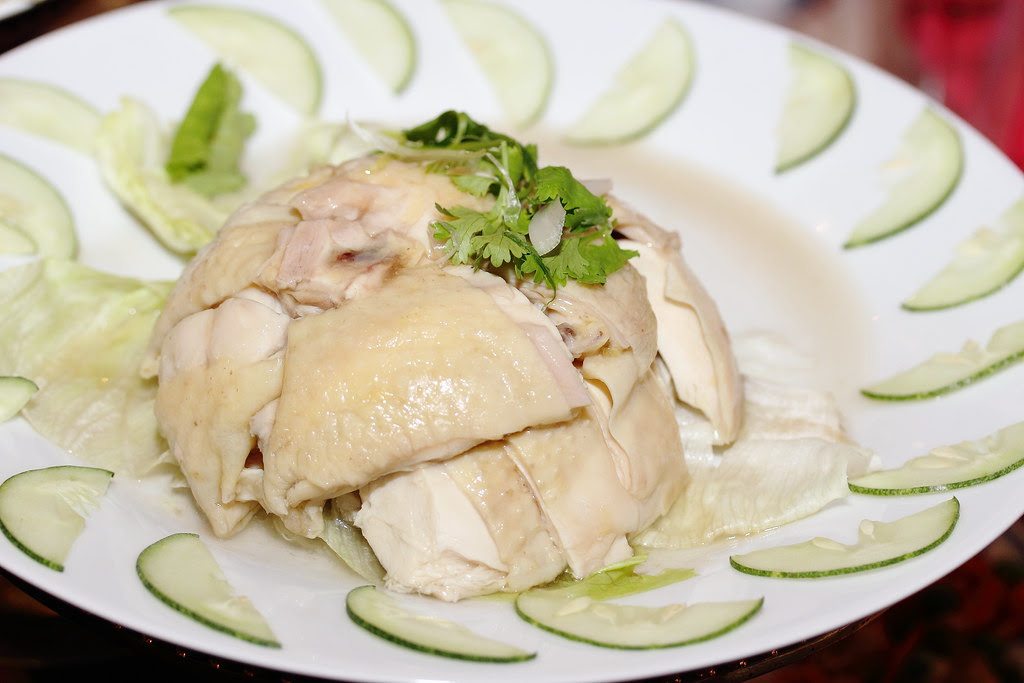 This really got me drunken of words. The chicken really could hold its liqueur well, it probably took a whole bottle of the alcohol to knock the chicken out . The beautifully poached Drunken Chicken unfortunately has a drink too much that the bitterness of alcohol had overpowered the sweetness of the chicken. 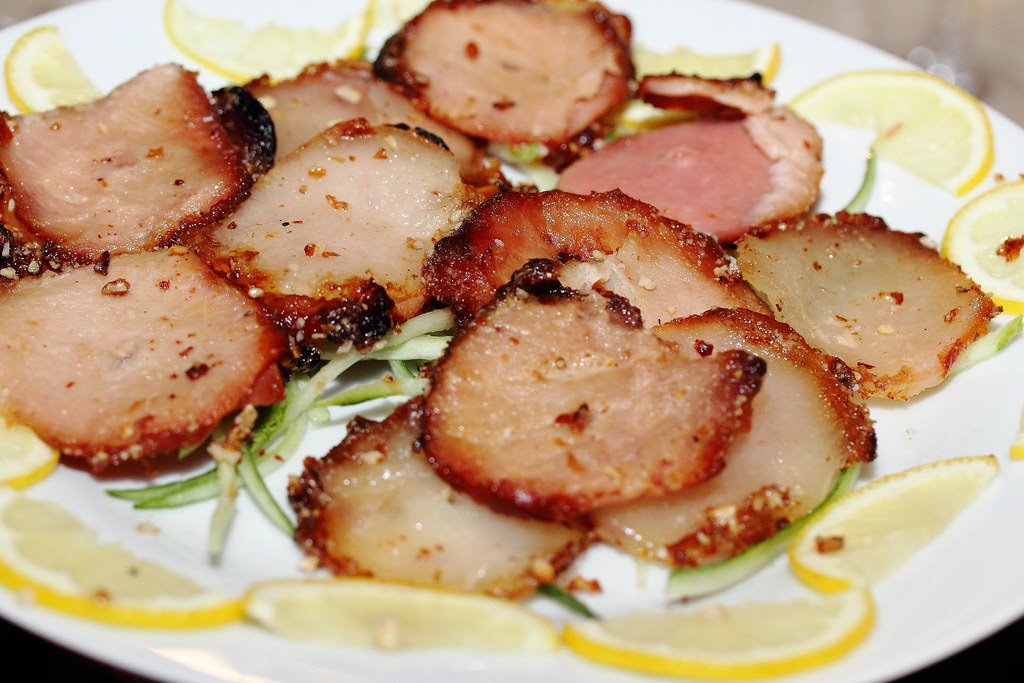 Having an interesting name the Golden Coin Chicken actually involved no chicken at all. This traditional Cantonese roast is made with candied pork lard, ham and pork loin that involved skewering and BBQ. I can taste the delectable flavours but I have a hard time appreciating it. 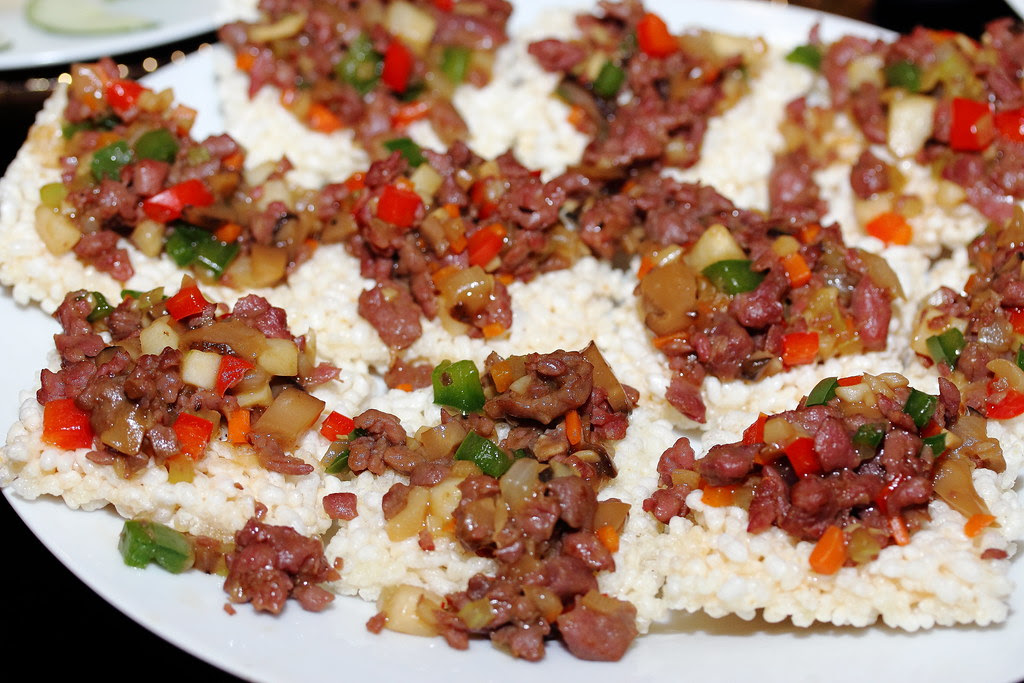 I have my reservation with the Minced Venison with Rice Crust. I enjoyed the crackling texture of the rice crust but some how I just did not feel that the minced venison together with the rice crust felt more distant in individual goodness instead of coming together as a complete dish. 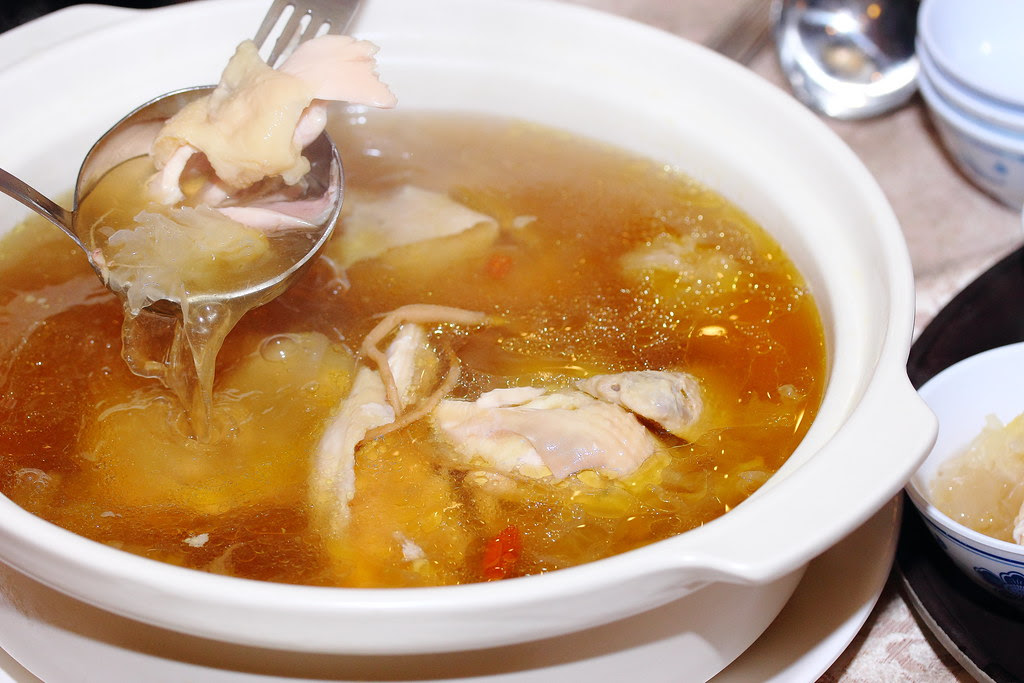 One sip and one could tell the bowl of tonic soup had been cooked for hours. The Double Chicken Soup with Ginseng and Snow Fungus was infused with the sweet bitterness of the ginseng, both nourishing and rejuvenating. The whole chicken was also cooked to fork tender with the meat falling off with ease. 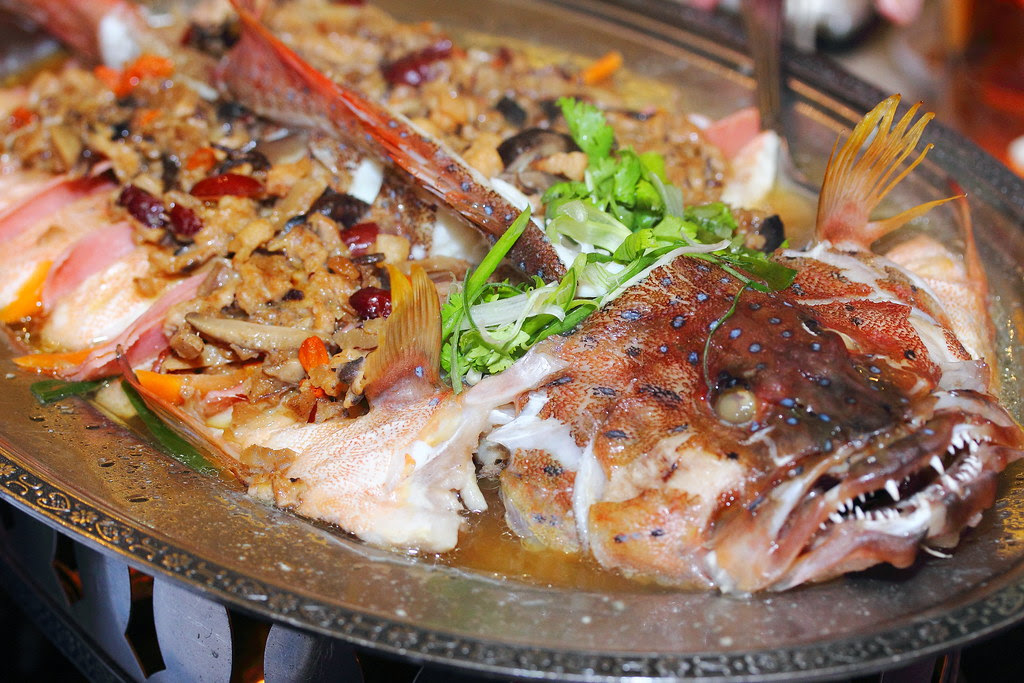 The Old Style Steamed Triple Layered Garoupa was topped with mushroom, ginger, carrot, cuttlefish and dried tangerine peels. While the fish was steamed to a nice moist, its lacking a sauce to accentuate  the flavour of the fish. 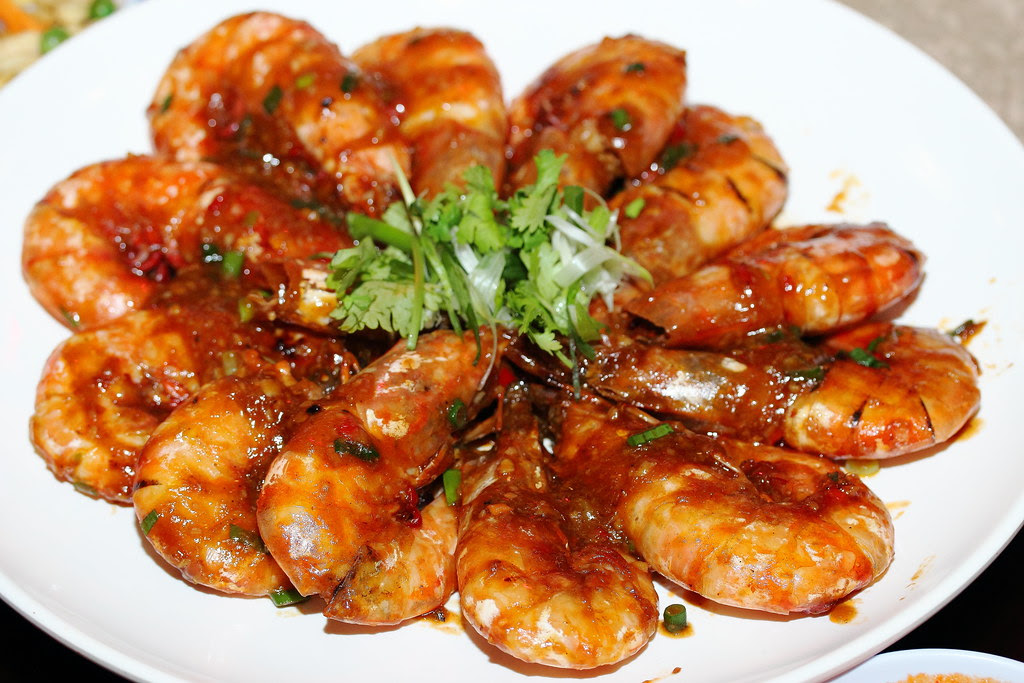 The Pan Fried Jumbo Prawns in BBQ Sauce was fresh, big and succulent. Nothing quite special about it but I can imagine this should be considered a delicacy and probably only enjoyed during special occasions during the 1960s. 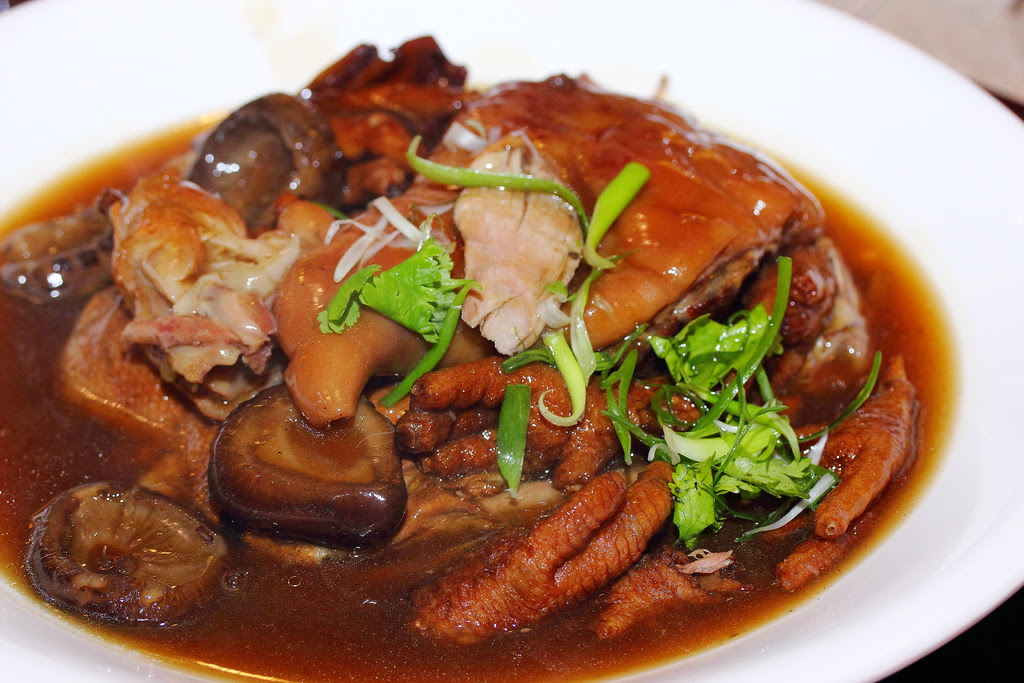 A pre-war Cantonese village classic dish, the 3 Legged Duck was actually duck served with 3 different types of animal legs. The duck, chicken feet, pig trotter and duck web were braised to a beautiful gelatinous soft texture that is worth clogging the arteries. 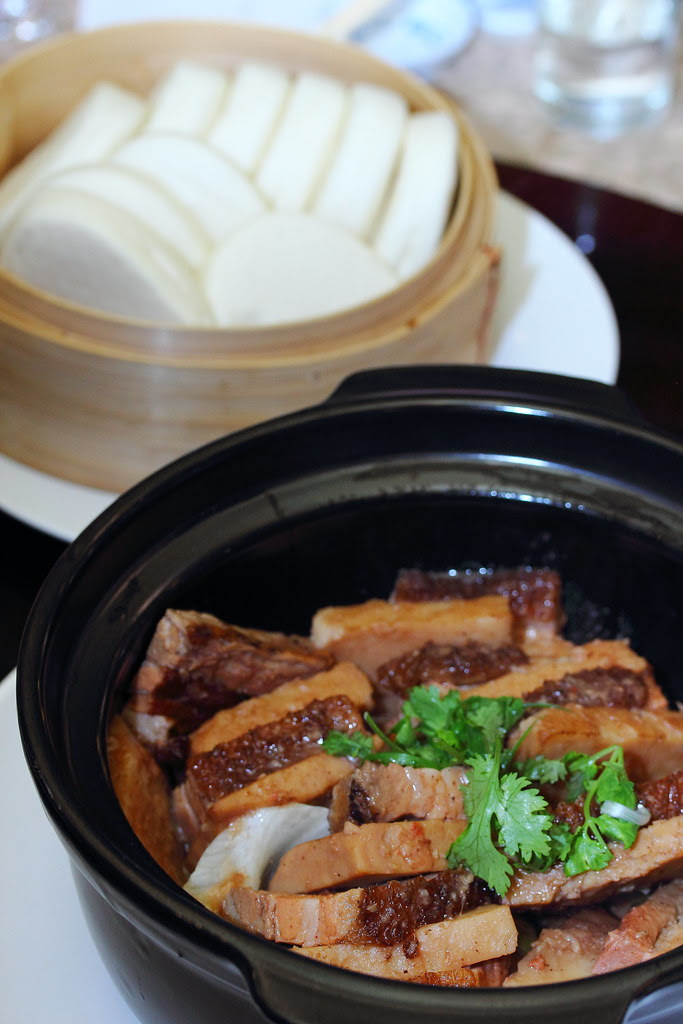 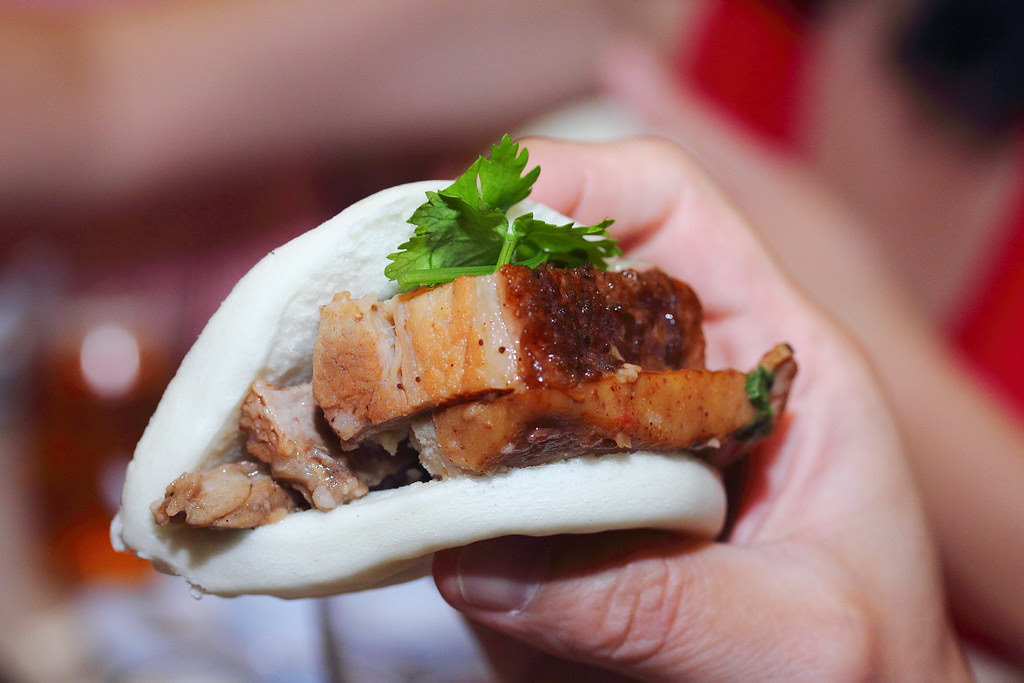 Served with steamed bun, the Pig Trotter with Yam fell short of my expectation. It was lacking the tenderness and thick braising sauce which I prefer. 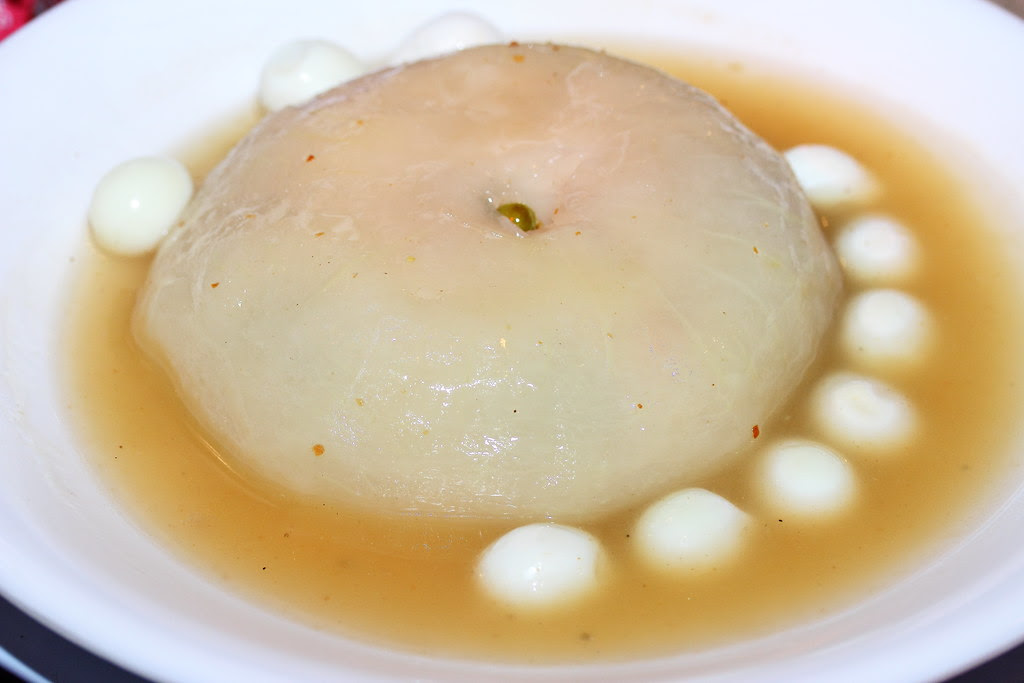 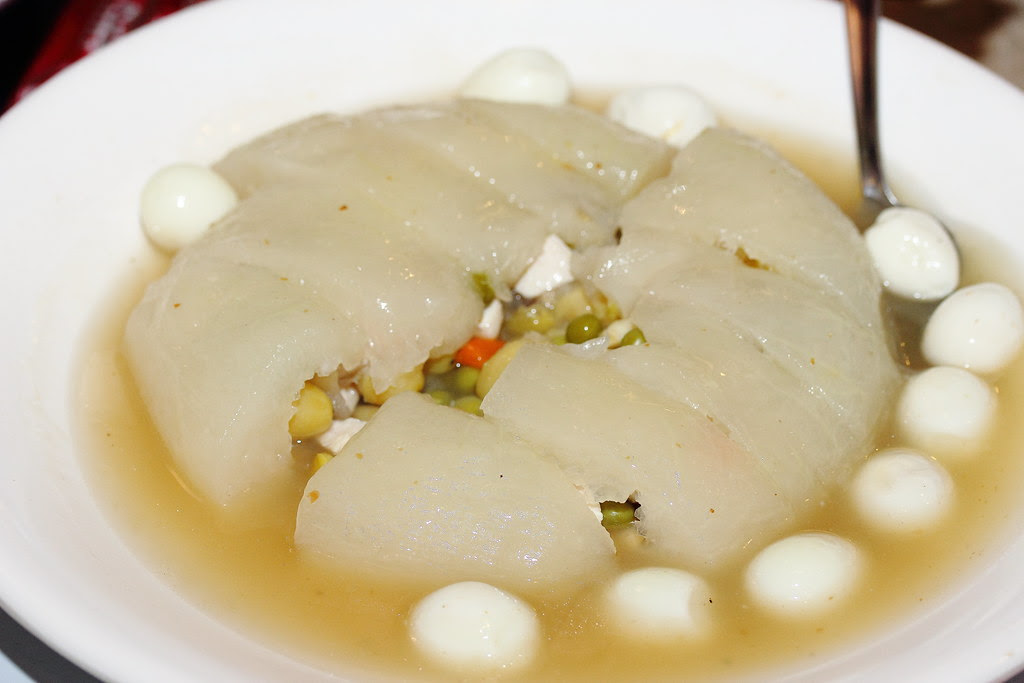 I already noticed the chef preparing the dish in the kitchen and I was eagerly waiting for it. The Treasure in Jade Bowl was cooked in a seafood stock until so soft that the melon basically melted in the mouth. Cutting into the melon bowl unveiled a hidden treasure of braised mixed vegetarian ingredients. 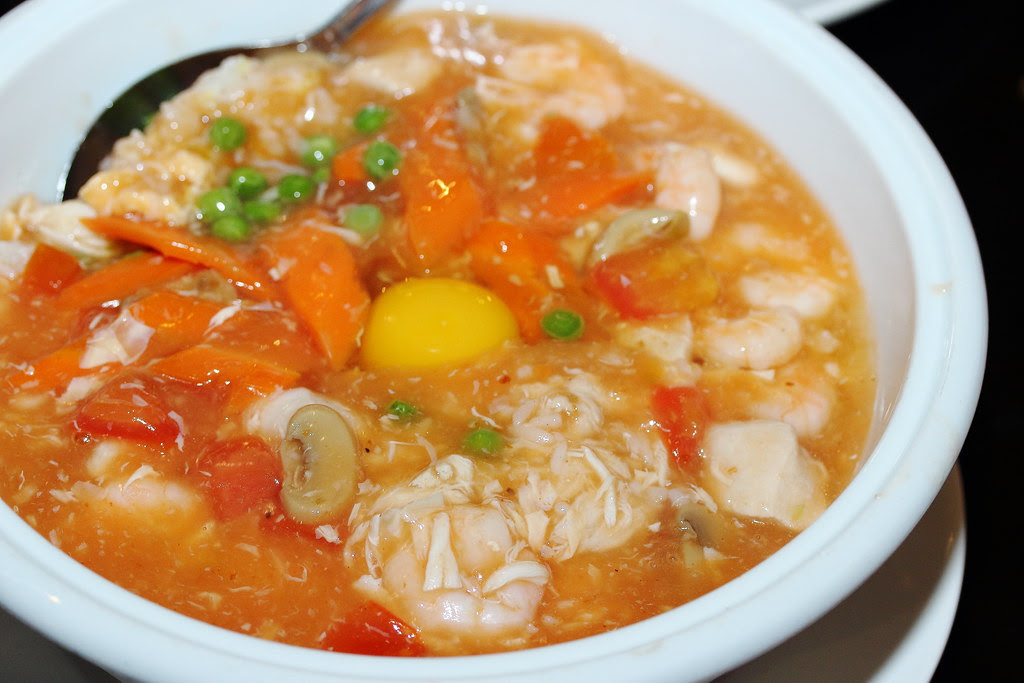 According to the 2 Master Chefs, the Celebration Braised Rice is a celebration dish whereby a newly wed bride will present this dish to her parent when she returns to visit them after the 3rd day, signifying her fertility. Not sure the meaning behind it but even thought I was full to the brim, I could not help going for a few spoonful to our Chinese version of risotto. 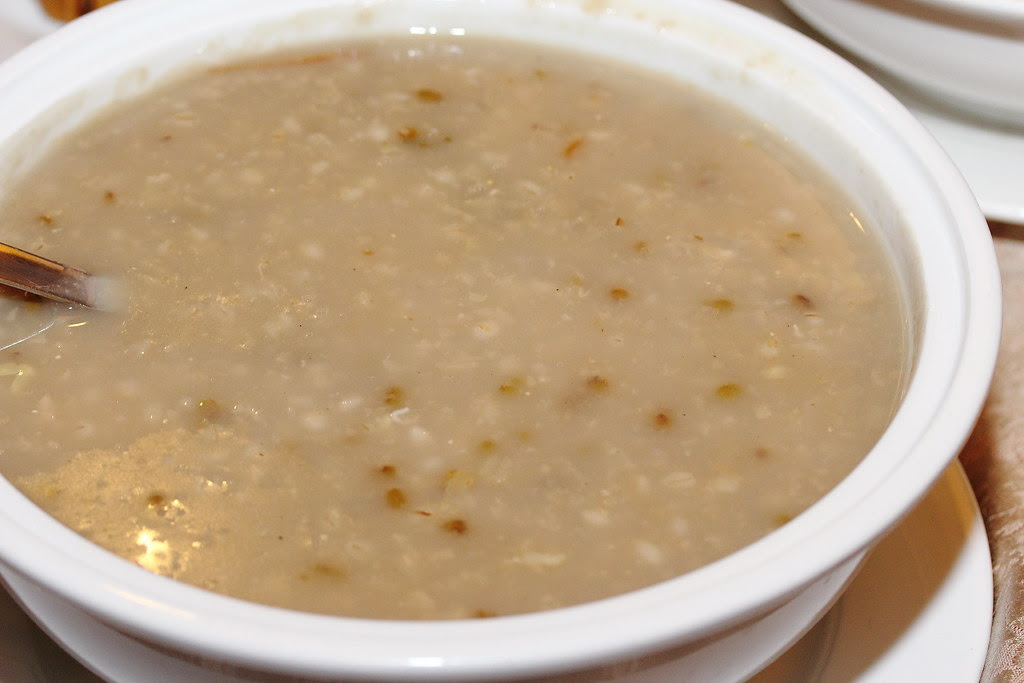 Dessert was a bit disappointing because the Traditional Green Bean and Barley Dessert was burnt. 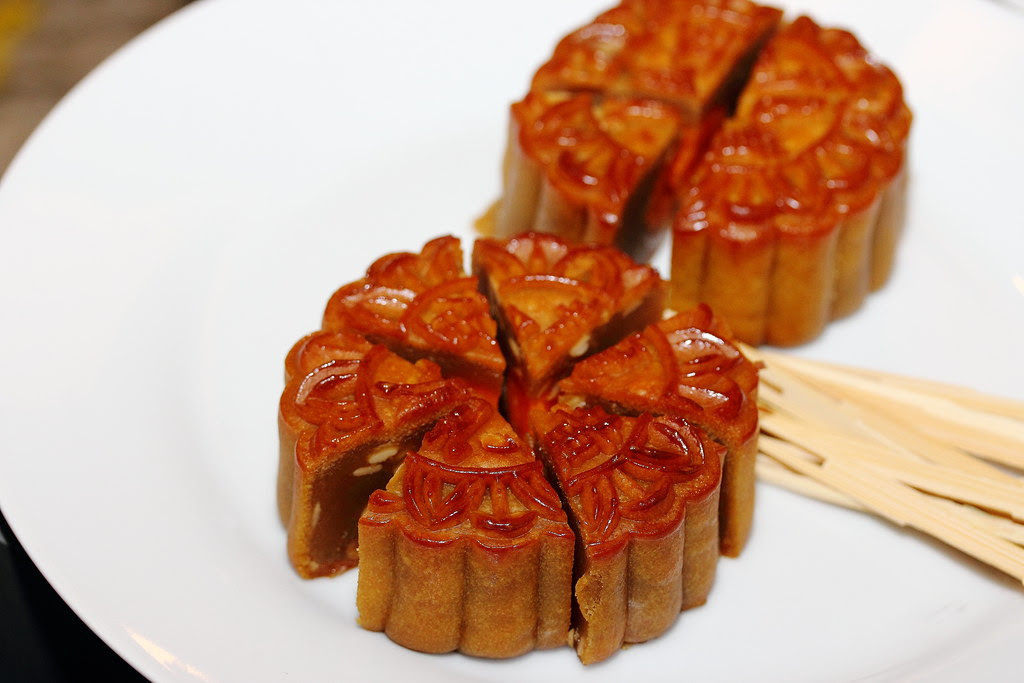 As our dinner was held during the Mid-Autumn festival, we were given a treat to the traditional mooncake wrapping up the feast on a sweet note.

I am glad that Makansutra has organised this dinner and I am able to meet the remaining 2 of the Four Heavenly Kings of Chinese Cuisine. I also got to try many dishes that is not served in restaurants nowadays, understand the history and culture behind these dishes. It was a dinner that was both educational and enjoyable.