After going through 11 month of facelift under the National Environment Agency (NEA)’s Hawker Centres Upgrading Programme, the newly furbished market and food centre at Block 210 Toa Payoh Lorong 8 reopened for business on 01 October 2011.

Following the phenomenon of Bubble Tea in Singapore, the new version of chilled beancurd has followed. This type of beancurd is unlike your tradition beancurd. It is sweeter, smoother and has a pudding texture. The chilled beancurd was invented by Lao Ban Soya Beancurd at Old Airport Road Food Centre. It was so popular that it opened another stall at Maxwell Food Centre.

Lately, many stalls have also followed Lao Ban Soya Beancurd and started selling the chilled version. In fact, chilled beancurd can now be founded at almost every corner of Singapore. At Toa Payoh Lorong 8 Food Centre, I noticed 2 stalls selling it during my visit. 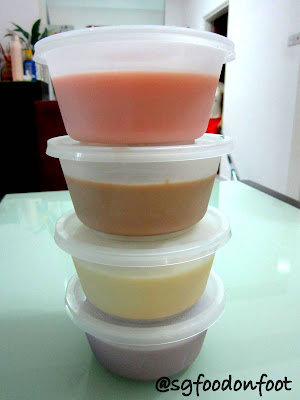 After my dinner at Toa Payoh Lorong 8 Food Centre, I bought 4 tubs of chilled beancurd home from B for Beancurd. The stall uses 100% organic soya beancurd for their beancurd. What interests me is they have different flavours of the chilled beancurd. I bought the strawberry, chocolate, yam and original flavours. They also have almond, peanut, green tea and blueberry flavours. 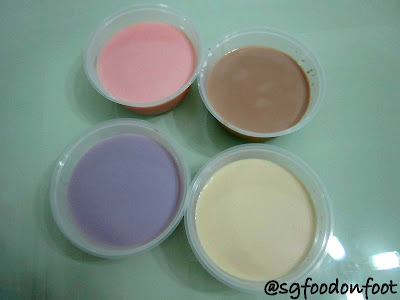 The chilled beancurd was nice and smooth comparable to Lao Ban Soya Beancurd. I felt that it was not as sweet though. Among the 4, I still prefer the original flavour. The strawberry and yam flavours were not distinct while the chocolate version tasted more like Milo.