Guan Kee is probably one of the famous fried kway teow (char kway teow) in Singapore. There was an endless queue of customers until the stall auntie has to keep telling the late joiners that they were sold out. I have to queue up for about 25 minutes for my turn to order. Once at the front of the stall you will get to read the numerous reviews pasted on the stall front. Guan Kee has even won the title king of fried kway teow of some tv show many years back.

The fried kway teow here is a balance between the dry and wet type and it was not as dark as those I have eaten. The stall still used pork lard to fry the kway teow which is unhealthy but a must to me if you want to serve a plate of yummy fried kway teow. Having eaten numerous fried kway teow, Guan Kee did not impress me. The dark sweet sauce was too little for my ideal plate of fried kway teow but I am sure they are others who do not agreed with me.

Do note that the stall is not open on Monday and Friday. You may have to go early as the fried kway teow was sold out by 3pm when I was there on a Saturday afternoon. 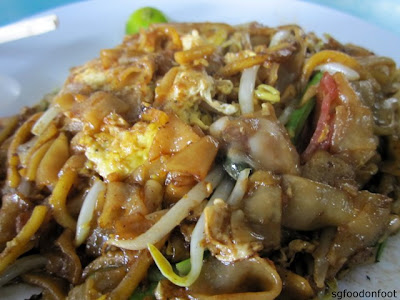